Objective: To examine the effect of the “after-hours” (18:00–07:00) model of trauma care on a high-risk subgroup — patients presenting with acute traumatic coagulopathy (ATC).

Design, participants and setting: Retrospective analysis of data from the Alfred Trauma Registry for patients with ATC presenting between 1 January 2006 and 31 December 2011.

Results: There were 398 patients with ATC identified during the study period, of whom 197 (49.5%) presented after hours. Mortality among patients presenting after hours was 43.1%, significantly higher than among those presenting in hours (33.1%; P = 0.04). Following adjustment for possible confounding variables of age, presenting Glasgow Coma Scale score, urgent surgery or angiography and initial base deficit, after-hours presentation was significantly associated with higher mortality at hospital discharge (adjusted odds ratio, 1.77; 95% CI, 1.10–2.87).

Conclusion: The after-hours model of care was associated with worse outcomes among some of the most critically ill trauma patients. Standardising patient reception at major trauma centres to ensure a consistent level of care across all hours of the day may improve outcomes among patients who have had a severe injury.

Deficiencies in trauma care “after hours” (18:00–07:00) have been well recognised.1 Such deficiencies may be caused by the differential availability of senior staff and resources for complex procedures, fatigue of personnel and/or increased prehospital logistical difficulties (eg, flight restrictions for helicopters at night). Resource allocation and staffing are substantially more expensive after hours, and a finding of an association between time of presentation and outcomes could be used to justify improved staffing in trauma centres outside “business” hours.

Compared with patients admitted “in hours”, patients admitted after hours following injury may be intrinsically at higher risk of death by virtue of a different casemix or increased severity of illness. Crude mortality rates have been previously reported to be significantly higher among people admitted with trauma at night, compared with during the day, but no significant association has been shown after adjusting for injury severity.2-5

In recent years, mortality after trauma has been steadily decreasing, secondary to preventive strategies and improved trauma systems.6-8 Accordingly, in advanced trauma systems, a smaller proportion of inhospital trauma deaths are now preventable. Potential changes to trauma care that could influence mortality therefore affect only a small proportion of the overall trauma population.

Among the overall population of an advanced trauma system, where most deaths are not preventable, the adverse effect of an after-hours model of care may therefore be underestimated. We hypothesise that the effect of any differences in trauma care could be emphasised if patient populations at higher risk of adverse outcomes are analysed.

Patients presenting to the emergency department with acute traumatic coagulopathy (ATC) are at high risk of adverse outcome.9-11 Mortality measured at hospital discharge remains high, with most deaths occurring in the first 24 hours.12,13 Delayed or suboptimal resuscitation may result in rapid progression of patients to the “triad of death”, with worse outcomes.14 Therefore, we chose to examine mortality in this clearly defined group of patients with complex injuries, and to examine the effect of the after-hours model of trauma care among them.

After hours was defined as the period between 18:00 and 07:00, 7 days a week. In the after-hours period, the following specialties were off-site, but on call: emergency physician (02:00–07:00), trauma surgeon (18:00–07:00), intensive care physician (23:00–08:00), haematologist (17:00–07:00) and radiologist (19:00–07:00). The number and seniority of nursing staff in the emergency department and intensive care unit in hours and after hours were similar, but extra staff on administrative duties were present during the day and available to be called on for clinical duties. Nursing staff levels in the operating theatre suite decreased at 18:00, and further at 21:00, to levels facilitating only urgent surgery until 24:00; staff were available on call to open extra theatre capacity, as needed, but with a short delay. The number of laboratory scientists in the haematology laboratory decreased at 17:00 and again at 22:00 until 07:00; again, with potential for recall.

All patients with ATC presenting between 1 January 2006 and 31 December 2011 were included. ATC was defined as an international normalised ratio (INR) greater than 1.5 on the first sample of blood taken after presentation to hospital.11,15,16 Patients receiving anticoagulation treatment were included. A massive transfusion was defined as ≥ 5 units of red cells in the first 4 hours after injury.17 Patients who received blood or blood products before presentation were excluded. The shock index was defined as heart rate divided by systolic blood pressure, and the first measured value on presentation was used.18 Mortality, as recorded at hospital discharge, was the primary outcome measure.

This study was approved by the Alfred Hospital Research and Ethics Committee.

Results from univariate analyses are reported as unadjusted odds ratios (ORs) with 95% confidence intervals. Variables exhibiting an association (P < 0.25) with the exposure of interest (after hours) and the primary outcome (mortality) were entered into a multivariable logistic regression model to determine the effect of confounders on the association between after-hours presentation and death.19 Significance for trends in mortality rates was determined using a Wilcoxon-type test for trend across ordered groups and is reported using z scores.20 Results from the multivariable regression model are reported as adjusted ORs with 95% confidence intervals. All analyses were performed using Stata, version 11.0 (Statacorp).

Among patients requiring urgent surgery or embolisation, mean time to theatre or radiology in hours was 3.9 (SD, 3.5), and was not significantly different to the time for patients who underwent urgent surgery or embolisation after hours (mean, 3.7 [SD, 3.7]; P = 0.73). Among patients who received a massive transfusion, the mean ratio of red blood cells to fresh frozen plasma administered in 4 hours was 0.54 (SD, 0.31) after hours and not significantly different to the mean ratio of 0.55 (SD, 0.28) in hours (P = 0.85). Cryoprecipitate was administered to 0.5% of patients after hours, compared with 1.5% in hours (P = 0.32).

This study of 398 major trauma patients with ATC shows that a high proportion of such patients present to hospital after hours, when immediately available senior specialist expertise is substantially less. Compared with patients who present in hours, these patients were shown to have significantly higher odds of death when injury severity and demographics were adjusted for. Some aspects of management, such as blood product administration and time to access the operating theatre or radiology services, were similar between the groups.

In major trauma centres, equipment and tangible resource availability remains the same regardless of time of day. However, staffing levels vary, and there has been substantial debate about the importance of fully staffed trauma centres at all hours — including emergency physicians, trauma surgeons, anaesthetists, intensive care physicians, radiologists and broader support staff.2,21-24 Despite controversy, most major trauma centres in the United States have developed a uniform 24-hour model of staffing, which is perceived as the ideal model of care.25 Analyses of the effect of after-hours presentations from these centres have the limitations of examining for a small effect in the overall population with a small event rate. A statistically significant effect of after-hours presentation on mortality has not been found in previous studies in fully staffed trauma systems.25 However, studying subgroups of trauma patients at high risk of preventable death is more likely to demonstrate an after-hours effect. A recent multivariable regression analysis of 191 patients with pelvic fractures and haemorrhage requiring angioembolisation at a large US trauma centre showed an almost 100% increase in mortality for patients treated after hours.26

The subgroup of patients with ATC differs from those with critical bleeding or those requiring massive transfusion.27 Among patients presenting with ATC, a substantial proportion of deaths will be unpreventable. In the remaining patients, haemostatic resuscitation and damage control surgery, if applicable, need to be optimised to achieve a favourable outcome. Rather than delivery of protocols, factors such as consistent levels of timely, coordinated care may be lacking after hours, and such details are beyond the scope of currently measured trauma quality indicators. However, if a demonstrated absolute difference of 10% improvement in outcomes could be achieved, this would equate to at least three lives saved per year, per trauma centre. Improved after-hours staffing could also be beneficial to other complex subgroups with high mortality rates, such as those presenting after traumatic cardiac arrest or those requiring massive blood transfusions.28,29 Equally, more senior clinical decision-making capacity on-site would support other key aspects of hospital performance and management of clinical risk.

The challenge for health policymakers is therefore to determine the cost-effectiveness of improved staffing in major trauma centres. Affecting a higher proportion of younger patients, the years of potential life lost because of injury far exceed those of cancer, heart disease, or stroke. Any such change should be accompanied by thorough vigilance to monitor its effect on staff fatigue and potential loss in popularity of critical care specialties. Such adverse effects, if observed, should be weighed against any benefits. In addition, to optimise outcomes, after-hours resources should be enhanced throughout the patients' journeys, from prehospital to the wards or intensive care unit, and not just sporadically in isolated departments.

This study included all patients who presented with ATC to a level 1 adult trauma centre, but is limited in being a retrospective study from a single centre. However, it is worth noting that the after-hours effect size was of substantial magnitude, and higher when adjusted for age, injury severity, GCS score and base deficit. Several confounders were accounted for, but we may have inadequately controlled for casemix or injury severity. Similarly, variables measuring detailed patient management, for example, volumes of fluid and times, ventilator strategies and surgical techniques, were not measured, and are potential confounders. The Trauma and Injury Severity Score30 method of severity adjustment was not used, as a large proportion of values for respiratory rates were missing or artificial due to the high frequency of intubated patients. The Injury Severity Score and shock index were used, both of which have been previously validated for use after trauma.31

There may be other differences among in-hours trauma patients compared with after-hours, including higher drug and alcohol use or mechanism of injury. Wide variations in the definition of ATC have been previously highlighted,11,32 and it should be noted that repeating this analysis using definitions of lower specificity may dilute the sample with less severely injured patients, limiting validity. Finally, our centre is serviced by a mature prehospital system and is a busy level 1 trauma centre, receiving more than 1200 major trauma patients per year, most of whom are injured by blunt trauma. These results may not be applicable to smaller centres or those with different patient demographics.

Our findings suggest that difference in outcomes observed among patients who presented after-hours was not associated with particular routine processes or timely access to interventions. This generates the hypothesis that such differences could be associated with access to effective coordination by senior decisionmakers during complex resuscitations. Our findings may be applicable to other specialties, and further research is required focused on patients at high risk of adverse outcomes. The decision to prepare for time-critical conditions at all times of day requires quality of outcomes be balanced against the high cost of such care. The feasibility and effectiveness of such change is yet to be determined. 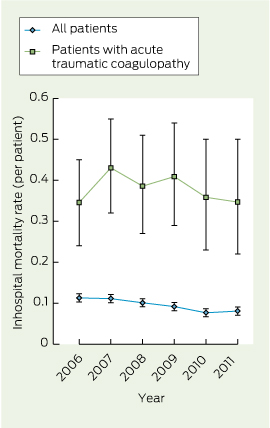 3 Association of variables with time of presentation among patients with acute traumatic coagulopathy, Alfred Trauma Registry, January 2006 to December 2011