Objective: To examine trends in mechanism and outcome of major traumatic injury in adults since the implementation of the New South Wales trauma monitoring program, and to identify factors associated with mortality.

Design and setting: Retrospective review of NSW Trauma Registry data from 1 January 2003 to 31 December 2007, including patient demographics, year of injury, and level of trauma centre where definitive treatment was provided.

Results: There was a decreasing trend in severe trauma presentations in the age group 16–34 years, and an increasing trend in presentations of older people, particularly those aged ≥ 75 years. Road trauma and falls were consistently the commonest injury mechanisms. There were 1328 inhospital deaths (13.6%). Year of injury, level of trauma centre, ISS, head/neck injury and age were all independent predictors of mortality. The odds of mortality was significantly higher among patients receiving definitive care at regional trauma centres compared with Level I centres (odds ratio, 1.34; 95% CI, 1.10–1.63).

Conclusions: Deaths from major trauma in NSW trauma centres have declined since 2003, and definitive care at a Level 1 trauma centre was associated with a survival benefit. More comprehensive trauma data collection with timely analysis will improve injury surveillance and better inform health policy in NSW.

Traumatic injury accounts for 9% of global mortality,1 and imposes significant physical and psychological disability on people of all age groups. It remains the leading cause of death in those under 45 years of age.2 Trauma systems facilitate the timely treatment of patients with major trauma at a trauma centre. This approach has reduced mortality in patients with trauma in Australia3,4 and internationally.5,6

A system for trauma care was first proposed in Australia in New South Wales in 1988 and then implemented in 1992.7 The paediatric trauma system in NSW has been studied previously,8 but the trauma system for the adult population has not been evaluated in NSW. A monitoring program was established in 2002 (the NSW Trauma Registry) by the NSW Institute of Trauma and Injury Management. A predefined, mandatory minimum dataset for patients with major injury (injury severity score [ISS] > 15) is collected by trained trauma nurses in each hospital and submitted electronically to the centrally maintained registry. Variables include 26 non-identifiable items about each injured person, including the time and mechanism of injury, the ISS, the prehospital transport mode and inhospital treatment.

Our aim was to examine trends and factors associated with mortality in adult patients with major traumatic injury in NSW.

Patients aged ≥ 15 years with major injuries, defined as an ISS > 15, were included. The ISS was calculated from the Abbreviated Injury Scale, 1998 revision.11 There were no changes in trauma centre designation or data collection resources during the study period.

Eight adult Level I centres and three regional trauma centres in the Greater Sydney Metropolitan region (Sydney metropolitan region, including the Illawarra, Hawkesbury–Nepean and Central Coast regions) submitted data to the NSW Trauma Registry. There were no designated rural trauma services during the study period.

Definitive trauma care was considered to be delivered at the hospital where most of the patient’s treatment and care were provided, as defined by length of stay (LOS). Outcome measures were limited to those included in the NSW Trauma Registry: overall hospital LOS, LOS in an intensive care unit (ICU) and inhospital mortality. Injury severity was grouped into serious (ISS, 16–24), severe (ISS, 25–39) and critical (ISS, 40–75).4

Road trauma and falls were the most common mechanisms of injury, with motor vehicle accidents reducing as a cause of injury, and falls of < 1 m increasing as a cause (P < 0.01). The mode of transport from the injury scene remained consistent, with 79% arriving by road ambulance, 12% by helicopter and the remaining 9% by private transport.

The number of interhospital transfers between regional trauma centres and Level I centres did not increase significantly during the 5-year period (range, 71–79; P = 0.46). The mortality rate for those patients transferred (n = 37) halved over this time (16.9% to 7.6%) (P = 0.06). There was a non-significant reduction in the proportion of patients receiving initial treatment in a rural or remote area, from 5.0% to 3.7% (P = 0.2). There was a significant decrease in the proportion of patients admitted to an ICU (P < 0.01), although the overall number of patients admitted (n = 880) and the LOS in ICU (median, 4 days) remained steady. Total bed-days during the study period were 163 810. The median LOS reduced slightly from 10 to 9 days. There was no significant difference in LOS by level of trauma centre.

There were 1328 inhospital deaths (overall mortality rate, 13.6%; range, 15% in 2002 to 12.9% in 2007). Year of injury, level of trauma centre, ISS, body region (Abbreviated Injury Scale) and age were independent predictors of mortality (Box 3). There was a significant decrease in the unadjusted mortality and the number of patients dying at Level I centres over time (P = 0.02). The adjusted relative odds of mortality decreased significantly from 2003 to 2007, except in 2005 (Box 4). The relative odds of mortality were significantly higher among patients receiving definitive care at regional trauma centres (OR, 1.34; 95% CI, 1.10–1.63) compared with Level I centres.

There was no significant difference in patient characteristics between patients who died in a regional trauma centre versus a Level I centre, except for mechanism of injury (χ2 = 20.15; df = 5; P < 0.01). Level I centres received a higher proportion of fatally injured patients who were pedestrians, had fallen > 1 m, or suffered burns or violence (eg, assault, stabbing). Deaths at regional trauma centres more commonly resulted from motorcycle or pedal cycle crashes.

This is the first statewide analysis of major adult trauma trends and outcomes in NSW. Age, sex, injury severity and initial treatment at a regional trauma centre were independent predictors of mortality. Despite a small reduction in mortality after major trauma over the study period, trauma remains a significant cause of mortality and hospitalisation in NSW, and accurate data on trauma-related mortality are, at present, not recorded for rural areas. Trauma should continue to feature prominently on the public health agenda.12

The overall mortality rate in NSW is similar to that reported in other Australian states.4,13 During the study period no change in prehospital protocol occurred, yet the proportion of patients receiving care at a regional trauma centre increased. This may represent improved data collection and reporting at these centres, as trauma coordinators became more experienced.

Patients admitted to a regional trauma centre had a significantly higher mortality rate compared with those admitted to a Level I centre. The survival benefit at Level I centres could be explained by the presence of greater resources, such as the availability of surgically trained staff 24 hours a day, a multidisciplinary trauma service14,15 and higher patient volumes, resulting in enhanced expertise in trauma care.16 Deficiencies in trauma care, regardless of trauma centre level, may occur at multiple points of care and are more likely to occur when there is failure to comply with protocols, poor communication and/or delayed referral.10,14,17,18 However, without reviewing each of the deaths in this study, it is not possible to comment on factors contributing to mortality.

The benefits of primary transport or early interhospital transfer of patients with major trauma to a Level I trauma centre are confirmed in our study. In 2008 Ambulance NSW introduced “Protocol T1”, which specifies that patients with major trauma should be taken directly to a Level I centre, bypassing lower-level centres, if transport time is within 1 hour.19 The impact of Protocol T1 on patient transport practice and outcomes requires evaluation.

The geography of NSW means that regional trauma centres will continue to play an important role in initial stabilisation of patients with trauma. Our study suggests that improved adherence to transfer guidelines will contribute to improved patient outcomes consistent with the experience in Victoria17 and the United States.20 In recent years, a series of standardised transfer guidelines for patients with major trauma have been implemented in NSW, with variable compliance.10,21 The low numbers of transferred patients could also result from some patients with critical injuries being deemed too unstable for transfer, transfer being considered futile, or patients dying before a transfer decision was made.10,21

Our study has several limitations. No validation checks were conducted on the trauma data (ISS and body region) because Abbreviated Injury Scale scores were not recorded. Outcome analysis and conclusions are limited by lack of data describing patients’ physiological status, comorbidities and prehospital transport time. There is potential selection bias because some patients may have been too unstable for transfer or died before transfer. In addition, some patients with an ISS > 15 are managed initially at smaller rural or regional hospitals, many of which are not designated or resourced to submit data to the NSW Trauma Registry. However, since the study period, seven rural and regional trauma services have been allocated funding for trauma nurse consultants and data managers. One burns referral centre does not contribute to the NSW Trauma Registry.

All the above factors contribute to underreporting of the incidence of major injury in adults. The linkage of data on deaths from the National Coroners Information System and ambulance records to trauma data would provide more accurate information to better inform injury prevention strategies, research priorities and trauma system design and planning.

Trauma systems in Australia have been developed largely on the basis of expert opinion, international experience and informal consensus. Each trauma system needs to consider the specific needs of the region, and the available resources and expertise.15 It is imperative to continue to evaluate trauma systems, and central to this is quality surveillance data.22 In 2010, a statewide online trauma registry was established to facilitate data collection; however, the amount of data each trauma centre collects and enters remains variable. The resourcing of an enhanced statewide minimum dataset, including physiological (vital signs) function and data on cause and time of death, would enable closer analysis of the NSW trauma system. However, ongoing independent academic support is required to conduct, interpret and translate the results of a sustained trauma monitoring program. This would enable targeted and evidence-based resource allocation for initiatives such as increasing helicopter primary retrieval capability from regional areas, or improving education and training for staff in regional trauma centres.

Mortality and LOS are crude methods of appraising outcome, and do not reflect the full burden of injury, although they allow simple monitoring of trauma systems. NSW Level I trauma centres appear to have been effective in reducing mortality. This is likely to be a result of the development and uptake of evidence-based practice, including the NSW Ministry of Health clinical practice guidelines.23 Where deficiencies are detected it is incumbent on governing authorities to ensure that all trauma centres are adequately resourced, staff are well trained, and compliance with trauma protocols are maintained.18 We recommend that the NSW Ministry of Health considers supporting a mandatory trauma verification process, such as that conducted by the Royal Australasian College of Surgeons.9 Currently, the government designates major trauma centres independently of trauma centre verification processes and standards.9

There appears to be a survival benefit associated with definitive care at a Level I trauma centre. More comprehensive trauma data collection with timely analysis will better inform evidence-based health policy in NSW. This can only occur with adequate resourcing. A mandatory trauma verification process would facilitate minimum standards of care.

Level IV: hospital with resuscitation facilities and medical attention available within 30 minutes. Patients with major trauma are transferred as soon as possible 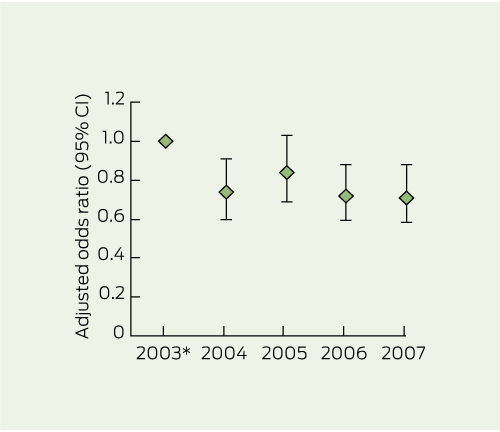 We thank the trauma nurses and data managers from participating trauma centres in NSW, and David Martens from the NSW Institute of Trauma and Injury Management for assistance with data provision. Rebecca Mitchell was supported by an Australian Research Council linkage postdoctoral fellowship (LP0990057). Data analysis was funded by the St George Honda Trauma and Critical Care Research Program.