Objectives: To examine experiences of racism in health settings and their impact on mental health among Aboriginal Australians.

Design, setting and participants: A cross-sectional survey of experiences of racism and mental health was conducted in two metropolitan and two rural Victorian local government areas (LGAs) between 1 December 2010 and 31 October 2011. Participants included 755 Aboriginal Australians aged over 18 years who had resided in the relevant LGA for at least a year. The response rate across all LGAs was 99%.

Main outcome measures: Being above or below the threshold for high or very high psychological distress on the Kessler Psychological Distress Scale.

Conclusions: Experiencing interpersonal racism in health settings is associated with increased psychological distress over and above what would be expected in other settings. This finding supports the rationale for improving cultural competency and reducing racism as a means of closing the health gap between Aboriginal and other Australians. Capitalising on this investment will require explicitly evaluating the impact of these initiatives on reducing patient experiences of racism.

Racism can be broadly defined as the behaviours, practices, beliefs and prejudices that underlie avoidable and unfair inequalities across groups in society based on race, ethnicity, culture or religion.1 Racism is often conceptualised at three different levels, which overlap in practice: interpersonal racism, internalised racism and systemic or institutional racism.2,3

The link between self-reported experiences of racism and poorer physical and mental health is well documented.4 There is ample evidence that racism contributes to worse health among Aboriginal Australians.5-9 There is also evidence that there are differences in the health care provided to Aboriginal and other Australians and that these differences can contribute to worse health outcomes.10 This in turn suggests that the deleterious effects associated with exposure to racism are likely to be amplified in health settings compared with other settings because of the impacts on future health-seeking behaviour and quality of care in addition to negative psychological and physiological effects.

To date, there has been little research examining exposure to racism in health settings and its impacts on mental health, particularly in comparison with other settings.4 This research is important to informing appropriate antiracism interventions. In this paper we explore three research questions:

The Aboriginal Experiences of Racism surveys were conducted in two rural and two metropolitan Victorian local government areas (LGAs). These localities were selected for their high levels of cultural diversity compared with other Victorian localities, rather than because of particular concerns about racism in these communities.

Local Aboriginal community interviewers were recruited and trained to administer the surveys with support from the research team. Survey participants were recruited through the interviewers' professional and personal networks. Participants were aged 18 years or older and had lived within their locality for at least 1 year. Surveys were administered face-to-face in group or individual sessions. Interviewers kept consent forms and surveys in separate envelopes at all times in order to reassure participants that their confidentiality would be protected.

Surveys were administered between 1 December 2010 and 31 October 2011. The full survey design and methods are described in the report Mental health impacts of racial discrimination in Victorian Aboriginal communities.11 The study received ethics approval from the University of Melbourne (0932878.6).

The key variables used in this paper include:

IBM SPSS Statistics version 21 was used to analyse the data. Descriptive analyses were conducted on the demographic composition of the sample, the proportion of people who experienced racism in different settings in the past 12 months and the types of racism experienced in health settings. Logistic regression was used to assess demographic differences between people who reported experiencing racism in health settings and people who did not. The analysis controlled for LGA. Logistic regression was used to assess the relationship between participants' experiences of racism in the past 12 months and being above the threshold for high or very high psychological distress on the K5 scale. Experiences of racism were classified into health settings, other settings and none. Scores of 12 to 25 on the K5 scale are indicative of high or very high psychological distress.12 The analysis controlled for LGA, age, sex and education.

A total of 755 people participated in the Aboriginal Experiences of Racism survey, with a 99% response rate across all LGAs. Demographic data for participants is presented in Box 1. Participants from Rural Councils 1 and 2 made up most of the sample, with Metropolitan Councils 1 and 2 each having fewer than 100 participants. The proportion of the Aboriginal population over 18 years old surveyed was 27% in Rural Council 1, 32% in Rural Council 2, 14% in Metropolitan Council 1 and 7% in Metropolitan Council 2.13 Most participants were women (61.4%), with a mean age of 36 years. About one-fifth of participants held either tertiary, trade or TAFE qualifications (Box 1). The 2011 Census reports that across the four LGAs, most Aboriginal residents over 18 years old are women (55%) with a mean age of 38 years. In the 2011 Census, 11.3% of Aboriginal residents aged 15 years and over in these LGAs held tertiary, trade or TAFE qualifications.13

Participants indicated that racism was most commonly experienced in shops and public spaces, as reported by 67% and 59% of participants, respectively. Nearly one-third of the sample reported experiencing racism within health settings. For details of experiences across all settings, please refer to the full report.11

Within health settings, participants most frequently reported being a target of racist names, jokes or teasing, or hearing comments that relied on stereotypes of Aboriginal Australians. This experience was reported by 52% of respondents who reported racism in this setting. Ten per cent of respondents who reported experiencing racism in health care indicated that they had been told that they “didn't belong in Australia”, that they should “go home”, or “get out” within this setting (Box 2).

People aged more than 24 years and people educated at university level or higher were more likely to report experiencing racism within health care (Box 3). However, there were no significant differences between the proportion of men and women who experienced racism in this setting (Box 3).

Almost every Aboriginal Victorian who participated in this survey had experienced at least one racist incident in the previous 12 months.

Experiences of racism were less common in health settings than in most other settings, which may in part reflect investment in reducing racism as part of the pathway to improving health care. The need to improve the capacity of mainstream services to meet the needs of Aboriginal Australians has been recognised in National Partnership Agreements to close the gap in Indigenous health outcomes through initiatives to improve cultural competency among mainstream services providers.19,20 However, there has been a lack of effort to evaluative these initiatives and where evaluation has been undertaken, it has thus far focused on changes in providers' attitudes, rather than examining impacts on patient experiences of racism.21 There is therefore little evidence about effective ways of reducing patient exposure to racism within health care settings, including within Australia.22 Nevertheless, a number of evidence-based principles for reducing racial bias in health care providers are supported by social-cognitive psychology, including a focus on individual attributes rather than categorical stereotypes, an improved understanding of bias, enhancement of providers' confidence in interacting with members of dissimilar groups, and improvement in perspective-taking and affective empathy.23 There is also some evidence that developing comprehensive models of care that are orientated to Aboriginal people can have positive impacts on the quality of care.24 Future systematic assessment of cultural competency initiatives will be essential for understanding how best to improve patient experiences in health care settings, and how to conceptualise the intervening steps between practitioner training and patient perspectives.

The results suggest that some Aboriginal Australians are more likely to report experiences of racism than others. Aboriginal Australians who have higher levels of formal education reported higher levels of discrimination than their peers with lower levels of education. This effect was particularly marked for the small number of Aboriginal Australians with university education in the sample. The finding that more educated people in minority groups report higher exposure to racism is consistent with the research literature and is considered to result from a combination of both greater exposure to racism and a higher likelihood of perceiving and reporting experiences of racism.25 People aged over 25 years were more likely to be exposed to racism than younger people. This may reflect differences in actual experiences or be associated with greater use of health services among people aged over 25.

The study has a number of limitations. The survey was cross-sectional, so it is possible that reverse causation is a factor in some of the associations reported. However, existing longitudinal studies suggest that racism is associated with worse health rather than the converse.

While random sampling was not used in this study, the sample demographic profile across the four LGAs closely matches the combined Census profiles.13 The purpose of this study was to explore the associations between experiences of racism and mental health outcomes, rather than examining the prevalence of racism within or between the four localities. Selection into the study was not based on either exposure to racism or mental health status; accordingly, the validity of the relationship observed between experiences of racism and mental health status would not be expected to be affected by the selection process.

The study did not examine characteristics of perpetrators in depth. It is therefore unknown whether racist incidents in health settings were initiated by health care staff, patients or others. Additionally, the study did not assess the type of health services where the racism occurred. Studies providing more setting-specific detail and data about perpetrators would greatly add to the existing literature.

Our study highlights that experiencing interpersonal racism in health settings is associated with increased psychological distress which itself is an indicator of increased risk of mental illness. Such a finding supports the rationale for improving cultural competency and reducing racism as a means of closing the health gap between Aboriginal and non-Aboriginal Australians. Capitalising on this investment will require explicitly evaluating the impact of these initiatives on reducing patient experiences of racism. 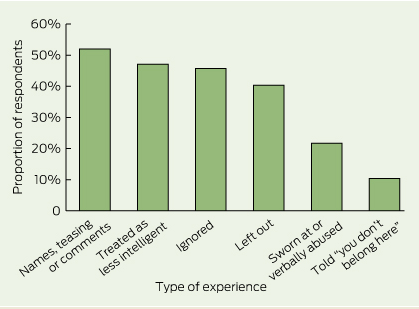 The Aboriginal Experiences of Racism survey was funded by the Lowitja Institute, Australia's National Institute for Aboriginal and Torres Strait Islander Health, the Victorian Health Promotion Foundation (VicHealth) and beyondblue. VicHealth also funded Angeline Ferdinand through its research practice leader program. Margaret Kelaher was supported by an Australian Research Council Future Fellowship. We would like to thank the community workers for their invaluable support in administering the surveys. We would also like to thank Peter Streker and Pamela Rodriguez for their support and advice.