Objective: To estimate the prevalence and incidence of dementia in Northern Territory Indigenous and non-Indigenous populations.

Design, setting and participants: Four data sources were used to identify clients with a diagnosis of dementia, from 1 January 2008 to 31 December 2011. The data sources included hospital admissions, aged care services, primary care and death registration. A capture–recapture method was used to estimate prevalence and incidence, including both diagnosed and unknown cases.

Main outcome measures: Prevalence and incidence of dementia among the NT Indigenous and non-Indigenous populations.

With a rapidly ageing population, dementia is commonly regarded as the leading health problem facing Australia in the 21st century.1 A report in 2007 estimated that the prevalence of dementia in Australians aged 65 years and over was about 6.5% and rising.2 Dementia is now the third leading cause of death in Australia, after heart disease and stroke.3 Dementia has an impact on every dimension of health and the health care system, with worldwide costs in 2010 estimated to have reached US$604 billion.3

There have been few Australian studies of dementia prevalence, based on clinical diagnosis, and most information that is available has been collected for varying purposes and often based on meta-analysis of a mix of Australian and international information.1,4,5 Although useful, these studies have relied on relatively old data and the assumption that Australia has similar dementia prevalence and incidence to other countries, despite known differences in dementia risk factors. There remains a significant knowledge gap on the epidemiology of dementia in Australia generally and, more specifically, in the Australian Indigenous population.

A 2008 study reported that, based on clinical assessment, the prevalence of dementia in the Indigenous population of the Kimberley region of Western Australia was almost five times higher and the onset much earlier than the national average.6 An earlier study (1994) also found that the Indigenous people, aged 65 years and over, living in far North Queensland suffered from higher dementia prevalence (20%).7 These results are consistent with the widely reported excess burden of disease in the Australian Indigenous population living in remote areas.8,9 The higher prevalence was less evident in a national study which used single data sources.10 The results in these three studies highlight the need for a broad population study to confirm prevalence and incidence of dementia in the Indigenous population. Importantly, dementia prevalence may be underestimated from a single data source even when the widely used diagnostic criteria are applied.11 Capture–recapture methods can be used to estimate the total number of cases in a population based on several incomplete sources.12

Dementia includes a range of conditions characterised by a progressive decline in cognitive, intellectual, memory and personality functions.5 About half of all dementia cases are diagnosed as Alzheimer disease, while other common types include vascular dementia, alcoholic dementia and unspecified dementia. Due to the silent onset and progressive nature of the disease, dementia patients may not be diagnosed for many years.13

The aims of this study were to estimate the prevalence and incidence of dementia in the Northern Territory Indigenous and non-Indigenous populations and to examine the demographic characteristics of diagnosed dementia cases.

Four data sources were used to identify clients with a diagnosis of dementia, during the 4-year period from 1 January 2008 to 31 December 2011. The NT Hospital Separations Dataset (HSD) contains comprehensive information on all admissions to the five NT public hospitals. The Primary Care Information System (PCIS) contains electronic clinical records for more than 30 000 Indigenous clients attending 50 health centres in remote NT communities. This is nearly half the total NT Indigenous population. The third source was the NT Aged Care and Disability (ACD) database, which records assessment and ongoing specialised management of dementia clients. The fourth data source was death registration data from the NT Registry of Births, Deaths and Marriages (BDM). Australian Bureau of Statistics estimates of NT resident populations were used as denominators for rate calculations.14

The NT Department of Health uses a unique health identifier, known as the Hospital Registration Number (HRN), for all departmental services. Client demographic information, including HRN, is contained within the central Client Master Index (CMI) database, which is the core of a data warehouse and links to all major client data systems. The HRN has been used in the warehouse for more than 20 years and is maintained with a program of continuing review and consolidation. It has been used in a number of previous linkage studies and has been reported as highly reliable.9,15 The HRN was used to link the three departmental datasets. Names, date of birth, sex and Indigenous status were used to match death registration records with CMI records. HRNs were then used to link death data with the other three datasets.

Dementia cases, based on a recording of clinical diagnosis, were identified using the following definitions. HSD diagnosis fields are coded by trained clinical coders using the International Classification of Disease, 10th revision (ICD-10).16 Cases were all clients with an admission during the study period and a principal or secondary diagnosis of dementia. Dementia cases in PCIS data were identified based on the International Classification of Primary Care, 2nd edition.17 Dementia cases were identified from ACD data based on the Aged Care Assessment Program Data Dictionary code list (codes 0500–0532). For BDM data, a key word search was used to identify dementia cases in the death registration dataset. Details of definitions and codes are provided in Appendix 1.

Diagnosed cases were identified from the multiple datasets and then, with capture–recapture, the degree of overlap between diagnosed cases in different datasets was used to estimate the number of missing (unknown) cases in the population.12 This approach involved a log-linear model with interaction terms to adjust for interdependence between data sources. The models tested were based on either three or four data sources. The inclusion of the fourth dataset (deaths) for prevalence estimates provided a marginal improvement and was retained for the final results. Dates of death were used to censor cases.

Prevalence and incidence were calculated based on all cases (diagnosed cases plus the estimate of unknown cases). Prevalence was estimated on a censoring date of 30 June 2011. Incidence was calculated based on new diagnoses recorded in any of the three data sources during the 2011 calendar year. Cases from previous years were excluded. Those individuals who died during 2011 were also excluded from the incidence model as they were considered unlikely to be newly diagnosed cases. Age-adjusted rates were calculated, using the direct method, for comparison with Australian rates.

Ethics approval for the project was granted by the Human Research Ethics Committee of the NT Department of Health and Menzies School of Health Research (2012/1755).

The results of the log-linear model for prevalence estimates, using four data sources, are presented in Box 2. There were estimated to be 249 unknown dementia cases at 30 June 2011, with 119 cases in the Indigenous and 130 in the non-Indigenous population.

This study found that the prevalence of dementia for the total NT population aged 45 years and above was higher than national estimates.5 NT has the fastest growing older population of all Australian states, and the prevalence of dementia in NT will continue to increase.14 The rapidly increasing demands on the aged care sector, including for dementia services, have significant implications for social, economic and health care planning in the NT.

The methods used in the study indicated that there remain many cases of dementia which have not yet been detected. Undetected cases in the Indigenous population were overrepresented for the population, with 47.8% of the estimate of unknown cases being Indigenous, whereas 30% of total NT population are Indigenous. This differential is consistent with lower access to or usage of services in remote areas19 and the language and cultural complexities of appropriate services for Indigenous populations. While the prevalence estimates provide a broad measure for planning appropriate services, the incidence estimate raises even greater concern. More than half of estimated dementia cases were not identified in a timely manner, a finding that supports the need for measures to attain more timely diagnosis and reduce premature death. Such measures include improved support for health care providers to recognise dementia, to be aware of those groups at higher risk of dementia and to provide appropriate support for referral. Whether a population-based screening program may be warranted to improve identification of cases requires further consideration.20

The high prevalence and incidence of dementia among the NT Indigenous population were consistent with the high prevalence of well known risk factors for dementia such as stroke, epilepsy, brain injury, smoking and alcohol-related health problems.8,9,21 It is increasingly recognised that early life events and social and biological factors may interact to influence the ageing process throughout the lifespan.22 Environmental factors can also affect an individual's physical functioning and ability to participate in society.22,23 Although there is currently no cure for dementia, many risk factors are modifiable by public health measures. Effective blood pressure control and strategies to reduce smoking and alcohol misuse are important in managing dementia risk and future burden. The high proportion of unspecified dementia has implications for both service planning and case management. More complete dementia diagnosis in aged care registration, hospital inpatients and primary care services in remote Indigenous communities is urgently needed.

Our study has a number of limitations. First, it is possible that the linkage of the same individuals in different datasets was incomplete. This would have the effect of overestimating prevalence and incidence. However, the unique patient identifier within NT health data has previously been shown to be reliable, and a substantial majority of individuals within the samples were linked across data sources. A second limitation is that capture–recapture methods assume a closed population. The older non-Indigenous population, in particular, may move either into or out of the NT at a time of declining health or retirement. The similarity of results with the national estimate suggests that the effect of interstate migration may not be substantial. While the NT Indigenous population is highly mobile within the NT, interstate migration is minimal.24 A third limitation is that the study relied on recording of a clinical diagnosis in the electronic data systems. Case notes and clinical reviews were not available to validate diagnoses. A final limitation is that only 4 years' data were available for the study. If information had been available for a longer period, some additional cases may have been identified and apparent incident cases may have been recognised as having had an earlier onset. Using four different data sources reduced the likelihood of our having missed the index episode. Future estimates, based on these data sources, will benefit from the availability of additional years of data.

There is growing recognition that dementia is a major global health problem of the 21st century. This study demonstrates the opportunity to use existing administrative data to inform a significant knowledge gap in population-level data. In this case, the results highlight the specific and emerging needs in the NT Indigenous population. More generally in Australia, large-scale population studies are warranted in order to better understand the burden, regional variation and social costs of dementing conditions. 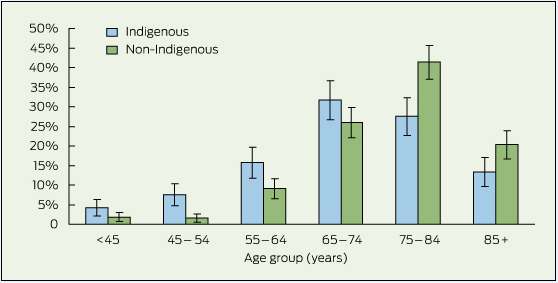