Trends in alcohol-attributable hospitalisation in the Northern Territory, 1998–99 to 2008–09

Objective: To examine trends in hospitalisation for alcohol-attributable conditions in the Northern Territory Aboriginal and non-Aboriginal populations between the financial years 1998–99 and 2008–09.

Conclusion: Rates of hospitalisation for alcohol-attributable conditions were high among NT Aboriginal people and increased during the study period. Although not statistically significant, the moderation in rates among Central Australian Aboriginal males after 2004–05 is encouraging. This apparent improvement is consistent with another recent study and provides tentative support that recent policy changes and interventions may be having an impact. The results of this study highlight the burden of alcohol use in the NT and emphasise the need for ongoing investment in comprehensive alcohol-management programs.

The NT has distinctive demographic and geographical features compared with the rest of Australia. The population is much younger, there is a high proportion of Aboriginal people, much of the Territory is remote and the climate is generally warmer. A previous report has highlighted the high burden of alcohol-related health conditions within the NT, especially in non-metropolitan areas.3 Alcohol misuse causes direct harm to individuals who consume alcohol at risky levels, contributes to violence and crime, and has negative impacts on families and society at large. Drinking alcohol at risky levels also has an economic impact. The total social cost of alcohol in the NT was estimated to be $642 million in the financial year 2004–05.4

In recent years, collective efforts have been made at both local and national levels to reduce excess alcohol consumption in the NT. Surveys and studies have been conducted to quantify the impact of alcohol misuse and to understand the underlying issues and identify solutions.2,3 Both government and non-government organisations have introduced a range of policies and interventions, such as the Northern Territory National Emergency Response Act 2007 (Cwlth) restricting the sale and consumption of alcohol in remote Aboriginal communities. Hospital inpatient discharge data are among the most reliable health datasets for analysing long-term changes in health outcomes. We examined trends in hospitalisation for alcohol-attributable conditions among NT Aboriginal and non-Aboriginal populations during a decade in which significant public health interventions were introduced.

We analysed inpatient discharge data from all five NT public hospitals for the financial years 1998–99 to 2008–09. During this period, hospital discharge data were coded using the International Classification of Diseases and Related Health Problems, 10th revision, Australian modification (ICD-10-AM).5 We selected diagnosis codes for medical conditions that are wholly or partially attributable to alcohol, based on previous studies.6-8 These are listed in the Appendix.

We used an accepted method — the aetiological fraction (AF) method — to calculate the proportion of hospitalisations that can be attributed to alcohol consumption. This method requires information on the prevalence of alcohol consumption within a population, the relative risk of developing a particular condition, and hospital discharge data.3 We calculated the AF using the equation:

This equation gave an indirect estimate of the proportion of the population who developed any of the specific medical conditions through exposure to the specified risk factor, alcohol consumption. For some conditions, alcohol-attributable fractions were applied directly to the total number of hospitalisations. Annual population rates were standardised for age.

We used a negative binomial model to estimate annual changes in alcohol-attributable hospitalisation rates, and a level of significance of P < 0.05.

Approval for the study (ref. no. HREC-2010-1335) was granted by the Human Research Ethics Committee of the NT Department of Health and Families and Menzies School of Health Research.

Our findings are consistent with reports of the high prevalence of drinking at risky levels among the NT population, including higher alcohol consumption in Central Australia.1,2 One report estimated that alcohol-attributable deaths in the non-Aboriginal NT population occurred at twice the national rate during July 2004 to June 2005.3 We estimated that the rate for alcohol-attributable hospitalisation among NT Aboriginal people was 329.2 per 10 000, which is much higher than the rates for the total population in other Australian states (range, from 25.2 to 63.3 per 10 000 population3). The rate for non-Aboriginal NT people in our study was similar to these rates in other Australian states using a comparable method of estimating alcohol-attributable hospitalisation.

Previous studies show that many Aboriginal people do not drink alcohol at all or drink very lightly. However, Aboriginal people who do drink are more likely to drink at risky levels.12 There are many factors that contribute to why some Aboriginal people drink excessively. In the last two centuries, Aboriginal people have been exposed to dramatic changes in their lives that have weakened traditional social control and contributed to emotional distress and intergenerational trauma, which are recognised drivers of substance misuse.12 While separation from family, land and culture is linked with emotional distress, evidence exists of the success of comprehensive population-based interventions.13 It is argued that communities need to address the problem at the grass-roots level, with a focus on why this happened. The most effective strategies are those that are directed at altering the conditions that produce alcohol problems.14

While the hospitalisation rate continued to increase among Central Australian Aboriginal females during the study period, the rate declined among Central Australian Aboriginal males from 2004–05 onwards. This decline supports an argument that recent changes in policy and practices may be having an impact. A 2012 report by the Menzies School of Health Research indicated that alcohol consumption in Central Australia had dropped by 18% since a suite of Australian and NT government alcohol restrictions came into force in 2006.15 However, recent policy changes and interventions have not occurred in isolation. The NT government and community organisations have introduced a range of interventions since the 1990s, including those under the Living with Alcohol Program (from 1991), alcohol sales restrictions in Central Australia (from 2002) and the Northern Territory Alcohol Framework project (2003).13,16,17 More recently, the Australian and NT governments have introduced broader policy changes to reduce alcohol harm across the NT. The impact of these interventions may be cumulative and become more apparent in the future. A well designed and comprehensive evaluation is warranted.

Our study has a number of limitations. Firstly, the relative risks we applied were developed for the general population and may not be the same among the NT Aboriginal population. This limitation is countered by the benefit of this being a constant measure for both populations. A second limitation is that we used the aetiological fraction method, applied to hospitalisations. NT Aboriginal people have much higher hospitalisation rates than the general population as a result of multiple factors, including social disadvantage, unemployment and social isolation as well as alcohol.18 Therefore, some of the excess “alcohol-attributable” hospitalisation among the Aboriginal population may be due to such factors, and, consequently, the study results need to be interpreted with caution. The influence of these conditions on health outcomes highlights the need for a multisectoral approach to reduce alcohol-related morbidity through individual and community-wide interventions. 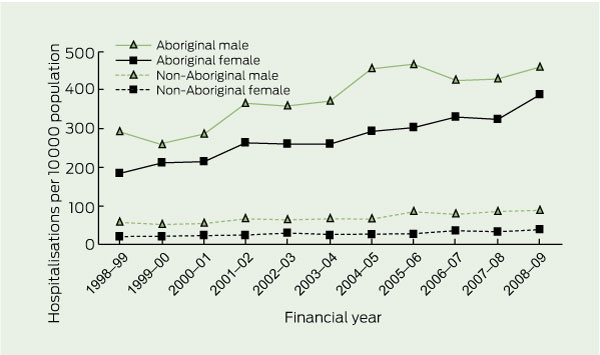 2 Age-adjusted alcohol-attributable hospitalisations per 10 000 population, Northern Territory, 1998–99 to 2008–09, by Aboriginality and region 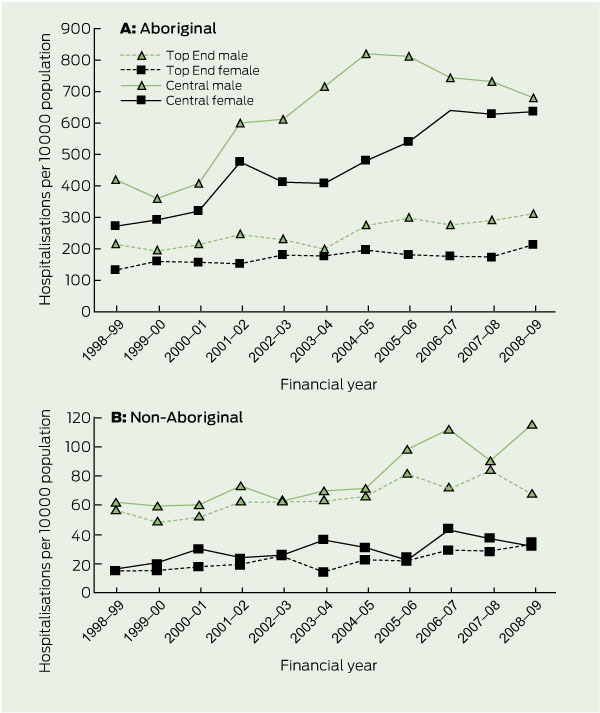 We thank Jo Wright and Steven Skov for their valuable comments on this article.