Design, setting and participants: A population-based retrospective study of children aged 1 – < 12 years residing in Queensland, Australia, during 2009 and 2010. Routinely collected notification, hospitalisation, testing and vaccination data were used to describe notification rates and testing patterns and to assess vaccine effectiveness (VE) by the screening method.

Conclusions: Acellular pertussis vaccine provided good protection within the first years of priming, but this waned as age increased. Changes in pertussis testing behaviour, because of increases in PCR use and awareness, may have contributed to increased pertussis notification rates and lower estimates of VE against notification owing to identification of milder disease.

We obtained confirmed pertussis notification data from the Qld notifiable diseases database and calculated annual age-specific notification rates for children aged 1 – < 12 years between 2008 and 2010. According to the national guidelines, pertussis case confirmation requires one of the following: definitive laboratory evidence; suggestive laboratory evidence and clinical evidence; or clinical evidence and epidemiological evidence.14

Definitive laboratory evidence consists of Bordetella pertussis isolation by culture or detection via a nucleic acid amplification test, such as a polymerase chain reaction (PCR) assay. Suggestive laboratory evidence is most commonly met by identifying a single high serum IgA titre to pertussis antigens or evidence of seroconversion. Clinical evidence for confirmed cases requires a coughing illness lasting ≥ 2 weeks or one of the following: coughing paroxysms, inspiratory whoop or post-tussive vomiting. Epidemiological evidence consists of contact between two people at a time when one of them is likely to be infectious and the other becomes symptomatic 6–20 days later, with at least one case in the chain of epidemiologically linked cases having been being confirmed with suggestive or definitive laboratory evidence.

Two major Qld pathology providers — Pathology Queensland, the publicly funded laboratory service, and Sullivan Nicolaides Pathology, a private company — provided data on pertussis serological tests and PCR assays undertaken at their laboratories in 2009 and 2010 for Qld residents. These providers were responsible for about 40% of pertussis notifications in Qld during the study period. We did not include culture results to determine pertussis testing patterns because culture was performed infrequently and mostly on specimens also tested by PCR. We describe the numbers of serological and PCR tests, and the results of these tests, by age and year of test for children aged 1 – < 12 years.

Changes in the acellular pertussis vaccine type and schedule delivered to Qld children during the study period included removing the 18-month booster dose in 2003 and introducing an adolescent booster dose in 2004 (Appendix 1). Children were considered fully vaccinated if they had received the recommended number of pertussis-containing vaccines for their age according to the schedule at the time. This meant that children in the 2006–2008, 2002–2004 and 1999–2001 birth cohorts were considered fully vaccinated if they had received three doses (primary course only), four doses (primary course plus 4-year booster) and five doses (primary course plus 18-month and 4-year boosters), respectively.

VE was calculated using the screening method, which involves comparing the proportion vaccinated among people who had a case of disease (PCV) with the proportion of the study population that is vaccinated (PPV).16 We obtained the vaccination status of patients who had a case of pertussis from Queensland Health’s Vaccination Information and Vaccination Administration System. As this register does not include children who have not received any vaccines, we obtained aggregated population coverage data for Qld for each birth cohort from the national, population-based Australian Childhood Immunisation Register (ACIR). Vaccinations recorded < 2 weeks before illness onset were excluded from calculations. The “third-dose assumption” was used in all VE calculations — children are assumed to have received the first two doses of a three-dose course if their third dose is recorded. The validity of this assumption has been demonstrated for the ACIR.17 Partially vaccinated children were excluded from PCV and PPV calculations. VE was not calculated for children aged < 1 or 4 – < 5 years as their vaccination status changed during the period of analysis due to receipt of the primary course or 4-year booster.

VE estimates and 95% confidence intervals were obtained by fitting logistic regression models with the outcome variable as the vaccination status of the patient with pertussis and offset for the logit of PPV.16 We fitted constant-only models for each stratum of birth cohort and notification year. When estimating the association between birth cohort and VE, we included birth cohort as a main effect. Sensitivity analyses on diagnostic method (notified cases confirmed by PCR or culture versus all notified cases) and hospital coding (hospitalisations with a pertussis code listed as the principal diagnosis versus hospitalisations with a pertussis code in any diagnostic field) were performed. Stata version 12 (StataCorp) was used for the analysis.

In total, 1961 pertussis notifications and 29 pertussis hospitalisations were included in the VE calculations (Appendix 2).

For children aged 1 – < 4 years, the VE estimates for the three-dose primary course against hospitalisation were 87.1% and 85.6% in 2009 and 2010, respectively (Box 3). Restricting the analysis to hospitalisations with a pertussis code in the principal diagnoses field yielded similar results.

The primary course of acellular pertussis vaccine was highly effective in protecting children aged 1 – < 4 years against pertussis notification and hospitalisation in Qld during the epidemic years of 2009 and 2010. Our VE estimates are similar to findings for predominantly whole-cell pertussis vaccine in the late 1990s in New South Wales, where VE was 85% for children aged 2 – < 5 years.18

However, our findings indicate that protection waned with increasing age following receipt of the 4-year booster and are consistent with the waning protection observed in the United States.4,5,10 The decline in point estimates for VE against notification in 2009, from 88% in children aged 5 – < 7 years to 71% and 80% among children aged 8 – < 10 and 9 – < 11 years, respectively, is similar to 2010 findings from California, where VE progressively declined from 95% for children 1 – < 2 years after their fifth pertussis vaccine dose to 71% for children ≥ 5 years after their fifth pertussis vaccine dose (recommended to be given at age 4–6 years).5 Overall, higher VE estimates were found for the whole-cell pertussis vaccine in NSW between 1996 and 1998 — 87% for children aged 5 – < 9 years and 78% for children aged 9 – < 14 years.18 This is consistent with evidence showing that the whole-cell vaccine used previously in Australia provided greater duration of protection against pertussis than the acellular vaccine.2 Despite the waning protection provided by acellular pertussis vaccine, we should ensure that high coverage with current vaccines is maintained until low-reactogenic vaccines providing sustained high-level protection against pertussis are developed.

As the screening method is very sensitive to small changes in coverage estimates, the accuracy of PPV estimates is important. Our study benefited from obtaining PPV values from the ACIR, which registers about 99% of Australian children by 12 months of age.19 Previous validation of ACIR data indicates that the most likely inaccuracy is that PPV will be underestimated,20 which, in isolation, may result in underestimating VE. A limitation affecting our study is that in the context of very high vaccination coverage, modest changes in PCV can lead to marked changes in VE estimates. Due to regional variation in immunisation coverage (estimated to be largely < 2%), our lack of geographical stratification may have biased statewide VE estimates in either direction. In addition, the small numbers of hospitalisations provide low precision for VE estimates against severe disease. The value of this method is in providing a broad overview of VE and changes in VE over time.21

In our study, VE point estimates were lower for 2010 compared with 2009, particularly among the older age groups. We are unable to explain the isolated low VE point estimate of 35% in 2010 among children born in 2002. While there is evidence of increasing circulation of vaccine-mismatched strains,22 we believe vaccine-driven selection pressure is unlikely to account for such rapid and uneven changes in VE estimates between 2009 and 2010, as this would require circulating pertussis strains to vary with childhood age group and change very rapidly over time.

Changes in diagnostic testing behaviour, owing to expanded availability and increased awareness of PCR testing,13 may have contributed to decreased VE estimates in 2010 compared with 2009. While we cannot be certain of the generalisability of the laboratory data that we used, they are probably broadly representative of pertussis testing in Qld because they accounted for about 40% of statewide pertussis notifications. Based on our data, use of the more sensitive, less invasive PCR assays for pertussis testing has increased rapidly in Qld. Before the widespread availability of PCR assays, clinicians may have been less likely to seek laboratory confirmation involving venepuncture, particularly for milder illness in children. Publicity about pertussis during the epidemic may have increased pertussis testing requests by clinicians; a recent study showed an almost 40% increase in testing between April 2009 to March 2010 and April 2010 to March 2011.23

Increases in awareness, testing and detection of milder disease, and the possibility that the vaccine may be less effective against milder disease, may have resulted in decreases in VE estimates.24 It may be hypothesised that through differential health care use, older children may be less likely to have milder disease diagnosed, leading to relatively high and stable VE estimates. However, point VE estimates among older children were substantially lower in 2010 compared with 2009. Increased testing is likely to have contributed substantially to high notification rates during the epidemic. However, the high and increasing proportion of pertussis tests with a positive result between 2009 and 2010 in older children suggests that the disease burden was truly greatest and increasing in 2010 among children aged 6 – < 12 years, consistent with notification patterns and waning protection following a four- or five-dose acellular vaccine course. A likely consequence of increased pertussis incidence among older children is increased transmission, which will have the greatest impact on infants.

In the era of predominant PCR use and heightened awareness, pertussis notification rates even during non-epidemic periods are likely to be substantially higher, and VE estimates for preventing notification may be consistently lower than recorded previously. This change in testing behaviour, leading to identification of milder disease, may require a recalibration of what are considered baseline notification rates and will need to be considered when interpreting future VE estimates.

2 Numbers of pertussis serological and polymerase chain reaction (PCR) tests by Queensland Health and Sullivan Nicolaides Pathology laboratories, and proportions with a positive result, for children aged 1 – < 12 years in 2009 and 2010, Queensland 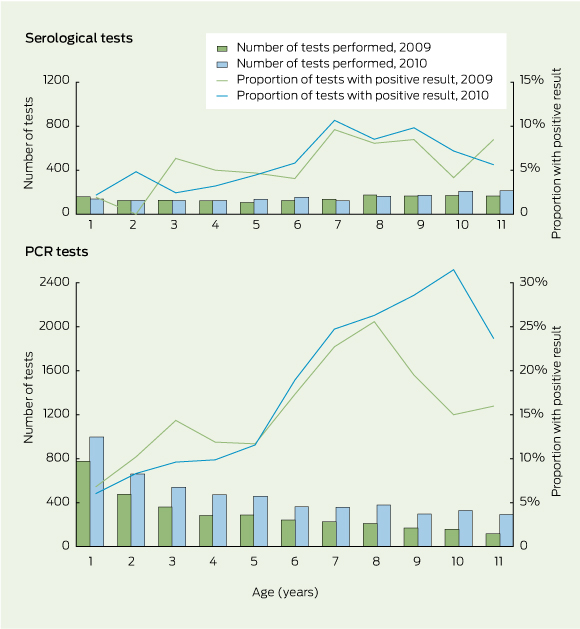 3 Vaccine coverage and vaccine effectiveness (VE) against pertussis notification and hospitalisation using the “third-dose assumption” for children aged 1 – < 12 years in 2009 and 2010, Queensland, by birth cohort*

We thank Angela Wakefield and Nancy Tran, of the Communicable Diseases Unit, Queensland Health, and Jason Christiansen, of Metro South Public Health Unit, for their assistance in data extraction; and Karen Peterson and Vicki Bryant, of the Queensland Health Immunisation Program, for describing the vaccination program, schedule and register. Sarah Sheridan is supported by a National Health and Medical Research Council (NHMRC) postgraduate scholarship and a Children’s Health Foundation (CHF) clinical PhD scholarship. Stephen Lambert is supported by an NHMRC early career fellowship and a CHF People Support Fellowship, which helped support the study. Keith Grimwood receives funding from the NHMRC.

Keith Grimwood has served on the GlaxoSmithKline advisory board for pneumococcal conjugate vaccines.