Conclusions: An automated CHADx reporting system can be used to collect data on patients with hospital-acquired complications. Such data can be used to increase emphasis on patient safety and quality of care and identify potential opportunities to reduce LOS.

In July 2008, a condition-onset flag was added to the specifications of the International Statistical Classification of Diseases and Related Health Problems (10th revision, Australian modification) (ICD-10) codes. This created the opportunity to distinguish between hospital-acquired complications and comorbidities present on admission in routinely coded administrative data. To help analyse this flag, the Australian Centre for Economic Research on Health (under sponsorship by the Australian Commission on Safety and Quality in Health Care) developed a classification system known as the Classification of Hospital Acquired Diagnoses (CHADx).1 This system provides hospitals with a meaningful way of grouping complications that are coded as arising in hospital into 17 classes (eg, adverse drug events and postprocedural complications) and 145 subclasses, and a way of reducing double counting of codes when they are recorded in related sequences.1,2

These results suggest that an automated system for reporting hospital-acquired complications would be valuable. Monthly use of CHADx as a tool to monitor trends in hospital-acquired complication rates and patient safety has been suggested.1 While initial results of analysis of jurisdictional data have been reported,1,7 we found no examples of CHADx implementation at the hospital level. To our knowledge, no hospitals have implemented local systems to take advantage of this classification and monitoring tool. This may be due to the apparent complexity of the CHADx system.

Here, we report the initial results of implementation of an automated CHADx reporting system in the South Metropolitan Health Service (SMHS) in Western Australia. In the absence of software to group inpatient separation data, we developed an abstract model that assigns combinations of diagnosis codes to CHADx classes and subclasses.11 We aimed to report the incidence of hospital-acquired complications in all inpatients presenting to the SMHS and investigate the association between hospital-acquired complications and hospital LOS in multiday-stay patients.

The SMHS is one of four health services in the state of WA. It consists of two teaching hospitals and three non-teaching hospitals that treat more than 35% of WA’s population. Over the 2010 and 2011 calendar years, these five sites had an average of 220 000 emergency department (ED) presentations and over 215 000 inpatients per year.

We obtained data from the SMHS Clinical Activity Data Warehouse (an extensive repository of inpatient, outpatient and ED data that are used for operational and strategic reporting, activity-based funding and management, and analysis purposes). We retrospectively analysed data for the period January 2010 to December 2011 for the five SMHS sites. We extracted data for all inpatient separations, including those for patients whose LOS was 1 day (eg, patients admitted for dialysis).

We also created a subset of inpatient separation data for multiday-stay patients. To do so, we excluded patients who were admitted and discharged on the same day, patients who presented to the ED with chest pain and stayed past midnight (because this large group of multiday-stay patients predominantly had a short stay), and patients admitted for obstetric or neonatal care. Patients admitted for obstetric or neonatal care were excluded from the LOS analysis as they differed from other multiday-stay patients. For example, unlike other hospital patients, generally speaking, this group are in good health and are not presenting for a “pathological condition”. Also, as described by the CHADx authors, the complications arising from this group of patients are handled differently in the classification system.12 These important differences affect the exposure of interest (ie, risk of experiencing a hospital-acquired complication) and the main outcome measure (ie, hospital LOS).

The study was registered with the relevant hospital clinical governance units and approved by the SMHS Human Research Ethics Committees.

It was difficult to find a suitable measure that could be used to adjust for patient complexity. All available measures were based on the coded diagnoses — comorbidities present on admission and complications arising in hospital. We reviewed the ICD-10 Deyo version of the Charlson comorbidity index (CCI)13 and found that 7% of diagnoses making up the CCI score were not present on admission (ie, they were hospital acquired). To account for this we removed hospital-acquired complications from the CCI score, and therefore refer to this measure as the adjusted CCI.

Numbers and rates of separations with at least one CHADx code assigned were analysed. Also analysed were the sum of hospital-acquired complications in each of the CHADx classes and subclasses. Unadjusted results comparing separations for patients with and without hospital-acquired complications were analysed using the χ2 test for categorical variables and the independent samples t test for continuous variables.

Regression methods for count outcomes are commonly Poisson based and require equal mean and variance to avoid biased estimates. When the variance is larger than the mean, the data are said to exhibit overdispersion. Negative binomial regression is an extension of Poisson regression that includes an additional parameter to account for overdispersion. Truncated count distributions in which a zero count is not possible require modification of the negative binomial or Poisson distribution to exclude the probability of a zero observation. In our study, LOS could not be zero and the distribution of LOS was overdispersed, so we used zero truncated negative binomial regression to model our data for our analysis of the impact of hospital-acquired complications and other variables on LOS.

Results of our analysis on LOS are expressed as incident rate ratios (IRRs) with 95% confidence intervals. The IRRs indicate the rate of increase or decrease in LOS for one group when compared with the reference group for categorical covariates or for an increase of 1 unit in continuous covariates. A robust variance adjustment was applied in our regression model to account for correlation between multiple admissions for the same patient.

General medicine was the specialty with the most hospital-acquired complications. Orthopaedic surgery, general surgery, cardiothoracic surgery and vascular surgery were among the top 10 specialties (Box 3). These 10 specialties reported 69.69% (39 253) of CHADx codes.

In our five-hospital sample, multiday-stay patients who experienced hospital-acquired complications stayed in hospital on average almost four times longer than patients without such complications, even after taking into account a range of factors that might also explain increased LOS.

Our findings of increased LOS are consistent with data from other studies.3,14-16 An observational study that used multivariable matching to measure excess LOS, cost and mortality attributable to hospital-acquired complications highlighted the significant impact that complications have on LOS — up to 10 extra days were attributed to complications such as postoperative sepsis, selected infections due to medical care and postoperative wound dehiscence.16

LOS is used to assess quality of patient care and hospital costs, and is the central measure underpinning the national activity-based funding model. Routine internal reporting of hospital-acquired complications using the CHADx system assists our health service in identifying potential opportunities to reduce LOS, and thus costs. The difference between the crude and adjusted LOS highlights the influence of casemix and severity and hence the importance of adjusting estimates for these factors. The hospital variation, evidenced in the regression of LOS data, illustrates the advantage of enabling each hospital to access its own complication data.

In addition to estimating the relationship between complications and LOS, implementing the CHADx system has allowed us to report on the incidence and frequency of hospital-acquired complications on an ongoing basis. To aid analysis, we include CHADx in our hospital business intelligence tools. These tools are refreshed daily and allow users to analyse CHADx rates by specialty, DRG, ward and other clinically meaningful factors. These tools have been useful for identifying the potential benefits of hospital-wide patient safety initiatives such as the WA Patient Blood Management Program.17

This study has some limitations. First, it is a retrospective cross-sectional study, so the findings show only an association between complications and differences in LOS. Longer stays may expose patients to more hazards, but longer stays may have been generated by hazards or complications experienced earlier during admission. We did, however, statistically control for possible effects of other causative factors.

Even with these limitations, we have found that reporting hospital-acquired complications using the CHADx system is valuable in understanding and describing the incidence and effects of such complications in our hospitals. Studying the patterns of these outcomes may help clinicians provide more expert care and help hospital administrators to target resources to areas where care could be improved.

3 Discharge specialties with the 10 largest numbers of CHADx codes 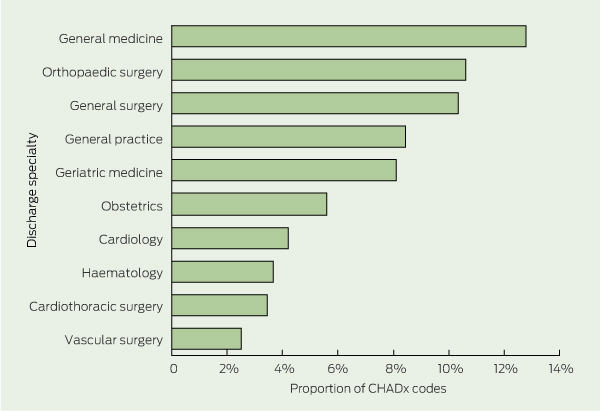 4 DRGs with the 10 largest numbers of CHADx codes

6 Impact of hospital-acquired complications and other variables on length of stay for multiday-stay patients, according to multivariable regression analysis*