A 19-year-old man with a 3-month history of a non-healing ulcer of the right knee and indurated oedema involving the entire lower leg (Box 1) presented after not responding to multiple courses of antibiotics. A punch biopsy showed necrosis of the dermis and subcutaneous tissues, and extensive infiltration with extracellular acid-fast bacilli on auramine–rhodamine staining. Polymerase chain reaction (PCR) testing for the IS2404 insertion sequence of Mycobacterium ulcerans was positive,1 and M. ulcerans was isolated from culture at 6 weeks. The patient reported holidaying on the Bellarine Peninsula, an endemic area for M. ulcerans, 6 months before the development of the lesion. Surgical intervention was deferred due to the extensive area involved and World Health Organization guidelines suggesting antibiotics as first-line treatment for extensive oedematous disease.2

He commenced oral daily rifampicin (600 mg) and moxifloxacin (400 mg) and, within a week, noted a marked decrease in exudate and improvement in the painful oedematous disease of the lower leg. Therapy was well tolerated and the ulcer remained stable with only one small area of new skin loss lateral to the primary lesion.

intravenous piperacillin–tazobactam 4.5 g three times daily was commenced. An ultrasound of the limb showed extensive liquefaction of the subcutaneous fat, and swabs were PCR-positive for M. ulcerans but culture-negative following prolonged incubation.

Within 12 hours of commencing prednisolone therapy (combined with broad-spectrum antibiotics), the patient became afebrile, with neutrophil and C-reactive protein levels within reference intervals on full blood examination and an improvement in ulcer appearance. He was discharged on a 25 mg maintenance dose of prednisolone while continuing rifampicin and moxifloxacin. Increasing areas of skin loss and exudate developed when prednisolone was decreased to 12.5 mg daily, and thus he underwent a limited debridement of the lateral knee and negative-pressure wound therapy (VAC GranuFoam dressing, KCI Medical), followed by successful split skin grafting. Heat therapy (Bair Hugger, 3M Arizant Healthcare) was used to maintain skin temperature at 39°C.

Prednisolone was continued for 2 weeks postoperatively (15 mg daily) and then stopped without further deterioration in the patient's condition. The patient completed a 3-month course of antimycobacterial antibiotics, at which time there was no sign of ongoing infection. Two skin sites subsequently discharged a small amount of culture-negative material but, at 12 months, there was no evidence of microbiological relapse.

Mycobacterium ulcerans infection is a geographically restricted infection often referred to by its local name as Daintree, Buruli or Bairnsdale ulcer (BU). The disease occurs in sub-Saharan Africa and within discrete regions of Australia, predominantly coastal Victoria and northern Queensland. Significant diagnostic delays, which place patients at risk of more extensive disease, are common. A recent review identified a mean duration of 42 days of symptoms before diagnosis (range, 2–270 days).3 These delays often occur when patients present outside endemic areas, a factor affected by the long incubation period of 4–7 months.4

BU is characterised by slowly progressive skin lesions with local necrosis, destruction of lipocytes and surprisingly little systemic inflammation. This unusual pattern of infection is the result of its unique virulence factor mycolactone, an immunomodulatory toxin that induces necrosis of host tissues and can limit initiation of immune responses and the recruitment of inflammatory cells.5 Following the increased use of antibiotics in BU, there have been descriptions of worsening clinical condition after an initial response to therapy.6 Such deteriorations (referred to as paradoxical reactions) are most common in patients with extensive disease and can take a variety of forms including increased ulcer size, ulceration of previously non-ulcerative papules or the development of new lesions not detectable before antibiotics.7 It is particularly important that paradoxical reactions are not misinterpreted as antibiotic failure, as the vast majority of lesions will resolve without a change in antibiotic regimen.

Paradoxical reactions may be the result of antibiotic-induced suppression of mycolactone synthesis, leading to decreased mycolactone concentrations and thus a reversal of macrophage and neutrophil dysfunction with renewed immune surveillance and response.7 There are many parallels to the paradoxical reactions described with Mycobacterium tuberculosis in HIV co-infected patients who initiate antiretroviral therapy. In that setting, the reaction likely represents an increased inflammatory response secondary to antiretroviral-induced immune reconstitution. As with M. tuberculosis, paradoxical reactions to BU commonly occur 4–8 weeks after therapy commences.7

In our case, the deterioration 4 weeks into therapy at the time that mycobacterial cultures became sterile indicates that this was not a failure of antibiotics but an unmasked immune phenomenon. Although our patient did receive a short course of intravenous antibiotics at the time of initiation of steroid therapy, the rapidity of his response and lack of identification of a new bacterial pathogen suggests that the steroid therapy itself was responsible for his improvement. This is supported by the fact that his condition deteriorated when his prednisolone dose was weaned.

It has been shown in animal models that corticosteroids do not adversely affect the outcome of antibiotic therapy in BU,8 and Friedman and colleagues reported a marked improvement in the appearance of lesions when steroids were used for paradoxical reactions in this setting.9 Established dosing guidelines are available for the management of paradoxical reactions to M. tuberculosis (most popularly, 1 mg/kg/day until improvement, followed by a 2-week wean),10 yet the degree of applicability of these guidelines to BU management is unknown.

As treatment evolves from a purely surgical approach to an adjunctive or primary antibiotic focus, optimal management remains controversial. In patients with extensive and oedematous disease, pre-emptive steroid therapy may have a role in preventing paradoxical deteriorations, although to date there is no randomised evidence to support its use in this way.

1 Appearance of the ulcer and proximal leg before antibiotic therapy 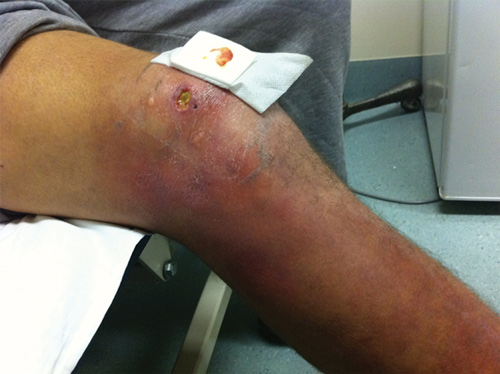 The lesion had been present and undiagnosed for 3 months. Swabs of the ulcer base were positive for acid-fast bacilli (auramine–rhodamine stain) and for Mycobacterium ulcerans: IS2404 polymerase chain reaction test and culture (inoculation on Lowenstein–Jensen media at 30°C).

2 Appearance of the ulcer 4 weeks into antibiotic therapy, at the time of paradoxical reaction 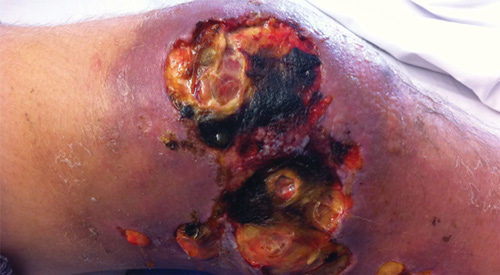 New areas of breakdown were appearing daily with liquefied fatty tissue protruding from the wound and associated with new onset of fevers and a marked increase in pain.

We thank the clinical photography unit at the Austin Hospital and the laboratory staff who performed PCR testing.