Prescribing trends before and after implementation of an antimicrobial stewardship program

Results: The antimicrobial stewardship team made 1104 recommendations in 779 patients during the 18-month intervention period. In 64% of cases, the recommendation was made to cease or de-escalate the antimicrobial therapy, or to change from intravenous to oral therapy. The introduction of the intervention resulted in an immediate 17% (95% CI, 13%–20%) reduction in broad-spectrum antimicrobial use in the intensive care unit and a 10% (95% CI, 4%–16%) reduction in broad-spectrum antimicrobial use outside the intensive care unit. Reductions were particularly seen in cephalosporin and glycopeptide use, although these were partially offset by increases in the use of β-lactam–β-lactamase inhibitors.

Conclusions: The introduction of an antimicrobial stewardship program, including postprescription review, resulted in an immediate reduction in broad-spectrum antimicrobial use in a tertiary referral centre. However, the effect of this intervention reduced over time.

Up to 50% of antimicrobial agents prescribed to hospital inpatients are considered to be inappropriate,1,2 and this excess use has been associated with increased mortality, adverse drug reactions and the development of resistant bacteria.3,4 The Australian Commission on Safety and Quality in Health Care recently published recommendations for hospital-based antimicrobial stewardship programs.2 A variety of approaches are available to implement these recommendations, including dissemination of guidelines, education, restricting antimicrobial availability and postprescribing audit and review.

We aimed to evaluate changes in antimicrobial prescribing after the implementation of an antimicrobial stewardship program in a specialist tertiary referral hospital.

Alfred Health is a health service comprising three hospitals in metropolitan Melbourne. The largest campus, the Alfred Hospital, is a 430-bed tertiary teaching hospital with medicine, surgery and trauma services. It includes immunocompromised populations (including patients with HIV, cystic fibrosis and heart/lung transplantation, and haematology and bone marrow transplantation) and is supported by a 35-bed intensive care unit (ICU).

Non-ICU antimicrobial stewardship ward rounds (by the stewardship pharmacist and either an ID registrar and/or an ID physician, on weekdays) commenced in January 2011. Each round comprised a focused review of clinical notes and results of investigations aimed at establishing the indication, planned duration, appropriateness, and alternatives to the use of restricted antimicrobial agents. Recommendations were discussed with the treating team and documented in writing; the final decision regarding patient management was the responsibility of the treating team. Patients who required more in-depth management advice were referred to the ID consult service.

Patients were reviewed by the stewardship team if they were receiving at least one restricted antimicrobial for a non-standard indication, where approval had expired, or where a pharmacist alert had been created. At our hospital, 13 restricted antimicrobial agents require web-based approval: amikacin, azithromycin, cefepime, ceftazidime, ceftriaxone, ciprofloxacin, meropenem, moxifloxacin, piperacillin/tazobactam, teicoplanin, ticarcillin/clavulanate, tobramycin and vancomycin. Patients were not reviewed by the antimicrobial stewardship team if they had already received a formal ID consult, or were admitted under lung transplant/cystic fibrosis, haematology and bone marrow transplant, or burns services, where ID physicians performed regular ward rounds (Box 1).

For several years in the ICU, the microbiology registrar has discussed results and antimicrobial treatments with ICU teams daily (supported by an ID physician three times per week). The stewardship pharmacist augmented this from January 2011 with all patients reviewed routinely. In December 2010, there was also a change to empirical ICU guidelines for health care-acquired sepsis, from ticarcillin/clavulanate or cefepime (for early and late sepsis, respectively) to piperacillin/tazobactam (regardless of onset), in all cases combined with an aminoglycoside, except when combined with quinolone in specified situations. Recommendations for vancomycin use did not change.

We compared trends in the rate of use of antimicrobial classes before stewardship implementation (January 2008 to December 2010) and after implementation (January 2011 to June 2012). Antimicrobial consumption quantities were converted into defined daily doses (DDD) per 1000 occupied bed-days (OBD) as part of the National Antimicrobial Utilisation Surveillance Program.7,8 Total broad-spectrum antimicrobial use was defined as the sum of usage for all classes except for aminoglycosides, which are regarded as narrow-spectrum antibiotics. Antimicrobial use is based on pharmacy purchasing data and inpatient stock distribution (excluding hospital in the home and the emergency department). Outcomes were assessed by:

We defined a clinically significant decrease in antimicrobial use as:

Recommendations were made to modify treatment for patients on restricted broad-spectrum antimicrobials; most commonly, ceftriaxone (278), piperacillin/tazobactam (155), ciprofloxacin (99) and vancomycin (96).

In 74% (819/1104) of cases, the recommendation was accepted by the treating team. For most of the unaccepted recommendations (233/285; 82%), no reason was cited for non-acceptance. Where reasons for non-acceptance were documented, they included the use of unapproved unit protocols (13) and the insistence of a more senior doctor in the treating team (14).

Impact on overall antimicrobial use

The antimicrobial stewardship program brought immediate reductions in the use of total broad-spectrum antimicrobials, particularly third/fourth generation cephalosporins and glycopeptides. In addition to case-by-case audit and feedback, regular stewardship rounds identified unapproved unit guidelines, provided an accessible clinical resource for junior doctors, raised awareness of appropriate antimicrobial use and reinforced the use of the web-based antimicrobial approval system. Our experience is consistent with a systematic review of stewardship programs that suggested that restrictive interventions were more likely to be successful than those based only on education or persuasion.9

The interventions that we have implemented are resource intensive, requiring a full-time pharmacist supported by part-time ID physicians (8–10 hours/week). Although a previous study has shown a decrease in several classes of broad-spectrum antimicrobials associated with a web-based approval system only,6 we felt that without an audit and feedback mechanism, this intervention would not be sustainable. Additionally, postprescribing audit and feedback recognises that appropriateness of therapy often needs to be considered on a case-by-case basis, and that broad guidelines on prescribing may not be easily applied to individual patients. Previous studies of similar interventions have found similar patterns of intervention, but on a much less intensive scale.10-12 Despite this, only six of 78 respondents in an Australian survey of hospital pharmacies reported implementing regular multidisciplinary antimicrobial stewardship ward rounds.13

There are several limitations to this observational study. We were unable to definitively ascribe changes in prescribing to the intervention, due to confounders such as concurrent changes in ICU empirical treatment guidelines. Aggregated data on antimicrobial use is not able to provide a measure of appropriateness of use and does not account for changes in antimicrobial dosing. The data on antimicrobial use includes units known to be high users of broad-spectrum antimicrobials (eg, cystic fibrosis) but where the only new intervention was the introduction of the web-based approval system. A formal cost-effectiveness study was not undertaken; however, we note that the antimicrobial classes where significant decreases in use were seen are relatively inexpensive (ceftriaxone 1 g, $1; vancomycin 1 g, $3) and thus are unlikely to offset the cost of the stewardship team based on saved drug costs alone. The antimicrobial use data used in this study were based on pharmacy purchasing data and inpatient stock distribution, with purchasing practices likely to have affected use data and to have potentially introduced delays in use trends. A 2-month worldwide benzylpenicillin shortage occurred during the study period (September–November 2011), which may have affected antimicrobial use trends at this time.

We attempted to reduce potential adverse effects by using built-in safeguards, including the provision to commence antimicrobials without approval for 24 hours, routinely discussing recommendations with the clinical team, and leaving the final decision regarding changes to antimicrobial therapy to the treating clinicians. We found evidence of greater use of β-lactam–β-lactamase inhibitor combinations that offset the decreased use of other classes, particularly cephalosporins and aminogylcosides — a phenomenon termed “squeezing the antibiotic balloon”. Concerningly, in the ICU we found some evidence of a rebound in the overall use of antimicrobials, and specifically, in the use of carbapenems, fluoroquinolones and glycopeptides. Further work is required to improve the quality of prescribing and evaluate longer term effects on antimicrobial resistance and patient outcomes. 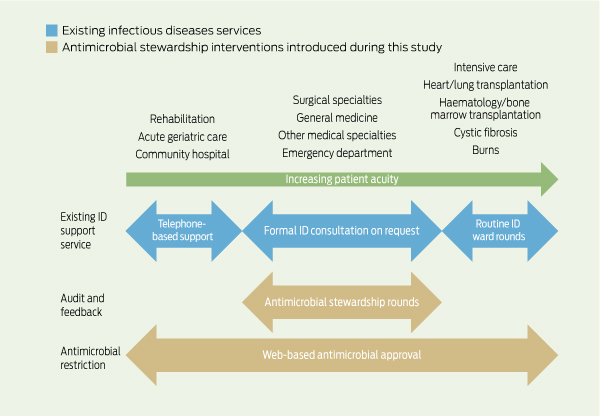 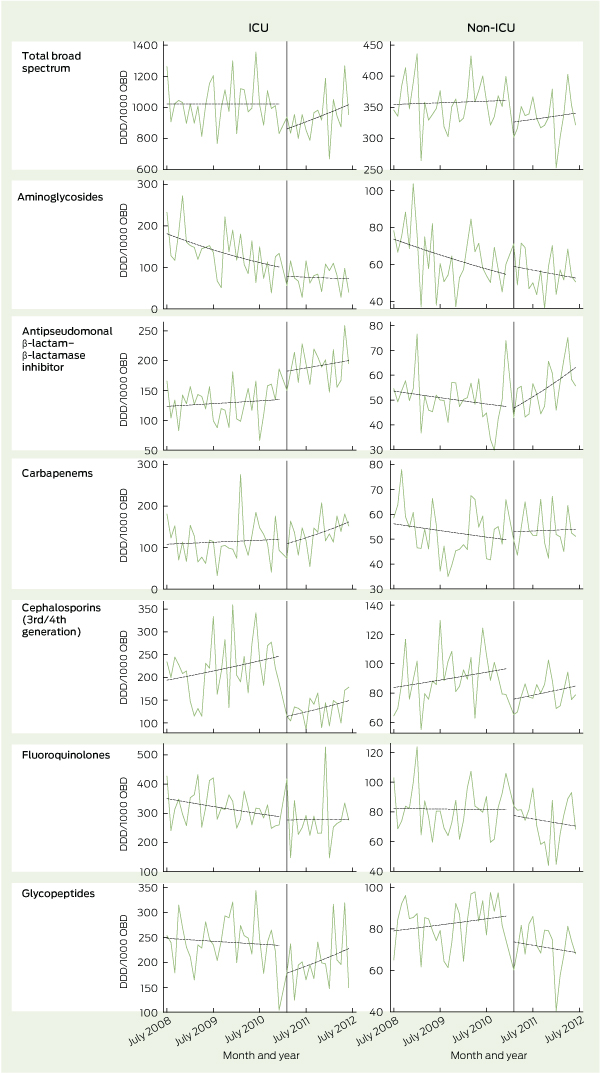 We acknowledge the previous antimicrobial stewardship pharmacists involved in this project (Jenny Kirschner, Trent Lee) and the members of the Alfred Health Antimicrobial Stewardship Committee. We also thank Alex Padiglione for helpful comments on the manuscript, and the National Antibiotic Utilisation Surveillance Program for data.