Brian Heber was born on 22 March 1929 in Finsbury Park, London, into a family of 13 doctors. His mother was widowed when Brian was 6. At the age of 11, he won a scholarship to Christ’s Hospital School, West Sussex. On leaving, his classics master remarked to him that going into medicine would be a “waste of intellect”.

After National Service, Brian obtained an ex-serviceman’s grant to study medicine at King’s College London. On graduating in 1955, he was employed at St George’s Hospital, London, followed by a period as Medical Officer at Caterham Hospital, Surrey, from 1958 to 1964. In 1958, he met his future wife Janice, a trainee nurse. They migrated to Australia in 1964, and Brian took up a position as Registrar at Bundaberg Base Hospital, Queensland. In 1965, they moved to Mudgee, New South Wales, where Brian was Visiting Medical Officer at the district hospital and a general practitioner until his retirement in 1988. He continued to work part-time and conduct locums for some years after he retired.

In 1988, Brian underwent open-heart surgery. In response to the lack of postoperative advice and schedules of recommended exercise, he founded Heart Support Australia in 1990 and also became an avid cyclist. Brian’s other interests included woodwork, amateur theatricals and membership of St John the Baptist Anglican Church, Mudgee.

Brian was much loved by the people of Mudgee for his care and understanding. He loved his food and wine, especially the local tipple, and was a great raconteur. Inclined to be eccentric in his later years, there is a story that while he was ordering some shoes from a local shop, the assistant, in taking down his details, requested his name. “You do not know who I am?” “No, Sir, I am afraid not.” “Well, you should do young lady, I delivered you!”

Brian spent his final year in a nursing home, suffering from Parkinson disease. He died on 19 October 2012 and is survived by Janice and their children Penny, Angus and Wendy. 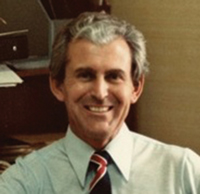