Objective: To evaluate the impact of the Australian rotavirus vaccination program on both rotavirus and all-cause acute gastroenteritis (AGE) hospitalisations and to compare outcomes in Indigenous and non-Indigenous people.

Design and setting: Retrospective analysis of the Australian Institute of Health and Welfare National Hospital Morbidity database for hospitalisations coded as rotavirus and all-cause AGE, between 1 July 2001 and 30 June 2010.

Main outcome measures: Age-specific hospitalisation rates in Indigenous and non-Indigenous people, before and after the introduction of the vaccine program in July 2007.

Rotavirus gastroenteritis is the leading cause of severe acute gastroenteritis (AGE) in children aged less than 5 years; it results in over half a million deaths each year, most of which occur in developing countries.1 Most children worldwide are infected with rotavirus by the age of 5 years, with severe disease occurring most commonly between the ages of 6 months and 2 years.1

In Australia, before a rotavirus vaccination program was introduced, this virus was responsible for more than 10 000 hospitalisations of children aged under 5 years annually, placing an enormous burden on paediatric hospitals.2-4 The burden of disease in Aboriginal and Torres Strait Islander children was much greater, with a hospitalisation rate about five times that of non-Indigenous children aged less than 12 months.5 Large outbreaks in Indigenous children occur on a background of endemic infection in central and northern Australia.6 There was about one rotavirus-related death in Australia annually, affecting the very young or, rarely, elderly adults.5

Australia was one of the first countries to introduce a nationally funded rotavirus vaccination program.7 Two vaccines were registered in Australia in May 2006: Rotarix (GlaxoSmithKline Biologicals) and RotaTeq (CSL Biotherapies/Merck & Co). Both are oral live attenuated vaccines for use in infants, but there are differences in their composition and dosing. Rotarix is an attenuated human vaccine containing the G1P1[8] strain of rotavirus which is given in a two-dose course at 2 and 4 months of age, whereas RotaTeq is a human-bovine reassortant vaccine containing 5 strains (G1, G2, G3, G4, and P1[8]), which is given as three doses at 2, 4 and 6 months of age. The Northern Territory was the first jurisdiction to fund rotavirus vaccination, beginning in October 2006; from July 2007 both vaccines were included in the National Immunisation Program (NIP) for all Australian infants.7 The vaccine used varies by jurisdiction, and there are upper age limits on doses, which preclude “catch up” vaccination.7,8 Some Australian jurisdictions and paediatric hospitals have reported a decline in rotavirus disease on the basis of laboratory testing,9,10 notification data10,11 and hospitalisations12-15 for the first 1 to about 3 years of the program. In addition, early estimates of vaccine effectiveness suggest that although vaccination provides a high level of protection against hospitalisation at a population level (in Queensland),14 its effectiveness in disease outbreaks in Indigenous children in central Australia is variable.16,17

This study is the first to examine national data on all hospitalisations for AGE. Our aim was to assess the impact of vaccination on hospitalisation rates, focusing on differences related to age, Indigenous status and location.

Hospitalisation data were obtained from the National Hospital Morbidity Database of the Australian Institute of Health and Welfare (AIHW). This database is an electronic collection of de-identified records of patients admitted to public and private hospitals in Australia. Hospitalisations were analysed if they had separation dates between 1 July 2001 and 30 June 2010 with either a principal or additional diagnosis that had International Classification of Diseases, 10th Revision, Australian Modification (ICD-10-AM) codes for rotavirus enteritis (A08.0) or any other AGE not coded as rotavirus (K52 and A01 to A09, excluding A08.0).

To enable comparison by Indigenous status, data were used only for jurisdictions and periods for which Indigenous identification was considered acceptable by the AIHW.18 Thus, data from 2004 onwards for New South Wales, Victoria, Queensland, Western Australia and South Australia, and from 2001 for the NT, were analysed.

We assessed rotavirus vaccine coverage using data from the Australian Childhood Immunisation Register (ACIR), a national register administered by Medicare Australia that records details of vaccinations given to children aged under 7 years.20

As we conducted our study using de-identified data supplied by AIHW for the purposes of program evaluation, specific ethics approval was not required.

From July 2001 to June 2010, there were 28 502 hospitalisations coded as rotavirus gastroenteritis. Box 1 shows that the annual winter/spring peak in rotavirus-coded hospitalisations was reduced after vaccination was introduced in July 2007, after which there was further substantial attenuation in the peak for the next two seasons. This decline in disease coincided with the rapid attainment and maintenance of a national vaccine coverage level of about 85% for a full vaccine course (either two or three doses) by 12 months of age (Box 1).

As seen in Box 2, rates were highest among children 1 year of age before rotavirus vaccination was introduced, with the greatest declines in rates occurring in this group and the 2-year-old age group (86% and 70%, respectively) by 2009–10 (Box 2 and Box 3). Overall, for children aged less than 5 years, there was a 71% decline in hospitalisations between periods before and after rotavirus vaccination (from 261 per 100 000 to 75 per 100 000). Rates also decreased after vaccination compared with the prevaccination years, for all other groups aged less than 20 years. However, there were small increases in rotavirus-coded hospitalisation rates among adult age groups in the years after rotavirus vaccination was introduced (Box 2).

Gastroenteritis not coded as rotavirus

There were differences in rates and rate reductions across states and territories. Declines in 2009–10 compared with the prevaccination period ranged from 34% in the NT to 83% in Tasmania (data not shown). In the NT, there was an overall downward trend in rates of hospitalisations for both rotavirus and other AGE after the vaccination program was introduced in late 2006. However, there were increases in rates of hospitalisation for rotavirus gastroenteritis in 2008–09 and 2009–10 (Box 4).

This study is the first to present national data showing substantial declines in both rotavirus-coded and non-rotavirus-coded hospitalisations for AGE since the introduction of rotavirus vaccines to the Australian NIP. Declines in numbers of hospitalisations were evident immediately from when the program commenced in 2007, consistent with the rapid attainment of high levels of vaccine coverage.21 As expected, the greatest impact has been in children aged less than 3 years, who were eligible to receive the vaccine during the study period. Our results are similar to those of studies from SA, Queensland, and NSW.13-15 The decline in non-rotavirus-coded AGE hospitalisations is not unexpected given that estimates of rotavirus-related hospitalisations before rotavirus vaccines were available exceeded those derived using rotavirus-specific coding,4,5 and NSW data indicate that the sensitivity of the rotavirus discharge code was only 48%, although its specificity was about 99% and the positive predictive value was 88% (S Jayasinghe, Senior Policy Officer, National Centre for Immunisation Research and Surveillance [NCIRS], personal communication). However, an impact on hospitalisation or emergency department care for all-cause AGE was also seen in trials of the two available rotavirus vaccines, in which testing for rotavirus was more rigorous.22,23

Nationally, there were significant declines in hospitalisations for rotavirus and other forms of AGE in those aged between 3 and 19 years after the introduction of the rotavirus vaccination program. This suggests a herd immunity effect, as only children aged less than 3 years were eligible to receive rotavirus vaccine during the study period. A decline in hospitalisations for AGE has also been observed in earlier studies in Australia13-15 and the United States,24 and this should be factored in to any cost-effectiveness assessments of the rotavirus vaccination program.

We found modest but significant increases in national hospitalisation rates for both rotavirus and non-rotavirus AGE in adults, particularly those aged 65 years or older. This increase occurred gradually across the whole study period, although absolute rates, particularly for rotavirus-coded gastroenteritis, remained low. This finding is consistent with the observation that rotavirus has been increasingly recognised as a cause of morbidity in older patients.25 Similar changes have been reported in Queensland17,18 and may relate to increased testing for rotavirus and other agents of gastroenteritis, such as adenovirus and norovirus, in older people.10,14

Our study had several limitations. Its design was descriptive and ecological, and outcomes may reflect factors not related to immunisation, such as strain variation and coding practices. However, natural fluctuations in rotavirus disease activity are known to occur, often related to the emergence of new strains; this emphasises the importance of assessing vaccine impact over many rotavirus seasons.7,15 In addition, although hospitalisation databases may directly reflect the rotavirus disease burden, data suggest that the positive predictive value and specificity of coding for rotavirus has not changed since rotavirus vaccination began, and together with non-rotavirus coded hospitalisation data, remains useful for assessing trends in hospitalisation rates (S Jayasinghe, Senior Policy Officer, NCIRS, personal communication). As vaccination status was not available from the de-identified data used in this study, vaccine effectiveness could not be determined. More studies are required to compare the long-term effectiveness of vaccination in Indigenous children in differing regions of Australia, and to assess the changing epidemiology of acute gastroenteritis across all age groups. 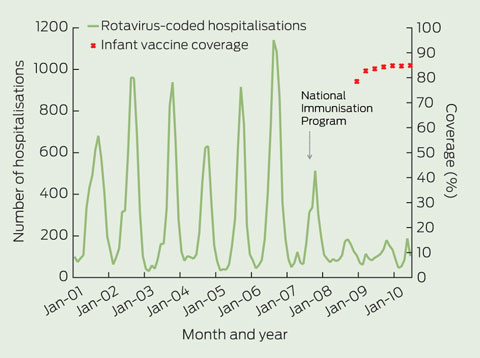 * By month of admission. † Coverage was calculated using data from the Australian Childhood Immunisation Register by 3-month birth cohorts born between 1 July 2007 and 31 March 2009, and the coverage assessment date was 12 months after the last birth date of each cohort.

2 Hospitalisation rates (per 100 000 population) for acute gastroenteritis (rotavirus- and non-rotavirus-coded), by age group, before and after the introduction of rotavirus vaccine, Australia, July 2001 to June 2010*

3 Comparison of rotavirus-coded hospitalisation rates by age in children aged < 5 years, before and for 3 years after the introduction of rotavirus vaccine, Australia, July 2001 to June 2010* 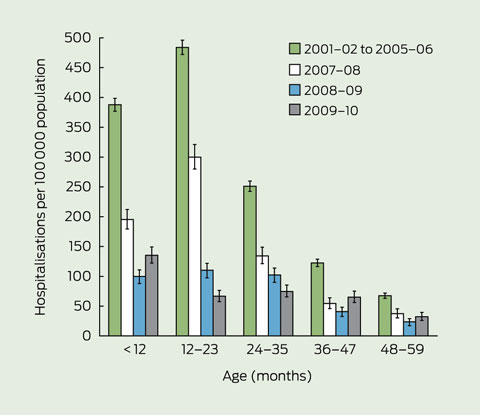 * Rotavirus hospitalisations: ICD-10-AM code for rotavirus enteritis (A08.0) in any field (principal diagnosis and additional diagnosis) was used; a mean annual rate was calculated for July 2001 to June 2006. 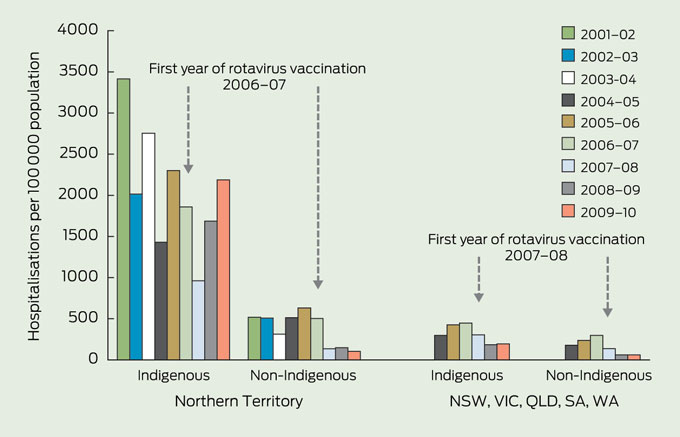 5 Hospitalisation rates (per 100 000 population) for Indigenous people for acute gastroenteritis (rotavirus- and non-rotavirus-coded), by age group, before and after the introduction of rotavirus vaccine, Australia,* July 2004 to June 2010