Objectives: To measure the increase in volume and age-specific rates of presentations to public hospital emergency departments (EDs), as well as any changes in ED length of stay (LOS); and to describe trends in ED utilisation.

Design, patients and setting: Population-based retrospective analysis of Department of Health public hospital ED data for metropolitan Melbourne for 1999–00 to 2008–09.

Conclusion: The rise in presentation numbers and presentation rates per 1000 person-years over 10 years was beyond that expected from demographic changes. Current models of emergency and primary care are failing to meet community needs at times of acute illness. Given these trends, the proposed 4-hour targets in 2012 may be unachievable unless there is significant redesign of the whole system.

Demand for emergency health care is rising consistently across the developed world, with the number of presentations to emergency departments (EDs) increasing by 3% to 6% per year.1-4 ED performance is compromised by the resultant overcrowding,5 increased waiting times and ED length of stay (LOS),6 and ambulance diversion. Patient safety is threatened, as the risk of adverse events has been shown to be increased by overcrowding.7

Government agencies publish annual reports of ED performance that include presentation numbers,1,3,4 and problems associated with rising demand are well documented in the peer-reviewed literature and the media.8 However, there are few longitudinal analyses of routinely collected data. Therefore, we aimed to measure the volume and age-specific rates of ED presentations and ED LOS, and to investigate characteristics of ED utilisation across metropolitan Melbourne over the decade to 30 June 2009.

We undertook a retrospective analysis of prospectively collected data describing presentations to public hospital EDs across metropolitan Melbourne over 10 financial years to June 2009. The study was approved by Monash University’s Human Research Ethics Committee and the Victorian Department of Health.

Data were obtained for financial years 1999–00 to 2008–09. Demographic and clinical factors for all presentations were categorised according to age group, sex, referral source, type of transport to the ED, Australasian Triage Scale (ATS) category, clinical diagnosis, ED LOS and discharge destination (Box 1).

We calculated annual age-specific and sex-specific presentation rates per 1000 person-years, adjusting for population changes over time. We used log-linear regression with weights inversely proportional to the variance of the outcome variable to model the effects of age and sex on ED presentations. We used descriptive statistics to compare trends from 1999–00 to 2008–09 in age, sex, referral source, transport type, triage category, primary diagnosis, ED LOS and discharge destination. We examined changes over time in median ED LOS by triage category and age; and log-linear regression was used to model the effects of age, sex, mode of transport, triage category and admission or discharge from the ED on ED LOS over time. We used Stata, version 11 (StataCorp, College Station, Tex, USA) for all analyses.

The trends that have occurred in presentations to metropolitan Melbourne public hospital EDs over the decade are summarised in Box 2.

The number of self-referred presentations increased across all age groups by 68% (Box 2), with a 2.3-fold increase for patients aged ≥ 85 years.

Most presentations (73%) in 2008–09 were classified as “walk-ins”. Although 23% arrived by emergency ambulance, this represented an increase in absolute numbers of 60% (Box 2). The likelihood of arriving by ambulance rose with increasing age, with a twofold increase for patients aged ≥ 85 years.

Throughout the study period, over half the presentations were classified as ATS category 4 or 5 (Box 2), with 47% aged 20–59 years in 2008–09. However, the greatest absolute increase was among emergency and urgent patients (ATS category 2 or 3), who comprised 43% of all presentations in 2008–09. Forty-five per cent of all patients aged ≥ 85 years were classified into these more acute categories.

There were no significant changes in primary diagnoses over time. The most common external causes were injury or poisoning, and infectious and parasitic diseases, and the most common illnesses were respiratory, circulatory or digestive problems.

In 2008–09, most patients (61%) were discharged from the ED within 4 hours of arrival. Median LOS increased over the study period for more acutely unwell patients (ATS category 1, 2 or 3) and decreased for patients who were classified as less urgent (ATS category 4 and 5) (Box 5). Median LOS rose with increasing age within each ATS category (Box 6). Of patients aged ≥ 85 years, 75% had an LOS of ≥ 4 hours in 2008–09. Fixed effects modelling (Box 7) indicated that an LOS of ≥ 4 hours was associated with increasing age, being female, emergency ambulance arrival, being classified as ATS category 2 or 3, and admission.

We confirmed a persistent rise in ED demand across metropolitan Melbourne, evidenced by an absolute increase of 55% in the volume of presentations over the decade to 2008–09. Older people presented at the highest per capita rate. The pressures on EDs are evident, with increases in LOS and higher frequencies of admission for older people. An abundance of literature recounts the problems associated with ED demand, but, to our knowledge, this is the first population-based longitudinal study of ED utilisation.

The trends observed represent an average annual growth rate of 3.6% above that explained by population change. The 55% increase in the volume of ED patients surpasses the United Kingdom’s 34% rise.1 However, the presentation rate shown for Melbourne, at 212 per 1000 people in 2008–09, is lower than the UK rate of 305 per 1000 people.

Our finding that the per capita increase was highest among people ≥ 85 years concurs with other studies.11-13 Our results here are also consistent with our recent study that demonstrated increasing and accelerating demand by older people for emergency ambulances.14 Older patients had longer LOS and were more likely to be admitted than middle-aged patients. Given projected trends in population ageing, the trends shown in our study are likely to have a dramatic impact on all aspects of emergency and hospital care. An ED visit for an older person is a sentinel health event that can lead to substantial functional decline and other adverse outcomes.15

In 2008–09, most patients were classified as semi-urgent or non-urgent, and almost 50% were of working age (20–59 years). This age group was predominantly self-referred, arrived by their own means, were classified as less acute and were not admitted (data not shown), which suggests they could have been managed appropriately in community-based settings.

The increase in patients who left at risk was notable. Most of these were aged 20–34 years, more likely to be ATS category 4 or 5 with an LOS of < 4 hours (data not shown), which implies lower urgency. The 6.6% in our study is higher than the 3.4% leaving at risk in the UK.16 Patients most often leave due to protracted waiting times.17 UK figures may be lower because of previously mandated 4-hour targets.

ED attendance by lower acuity patients could be related to changes in primary care service delivery. An association has been reported between ED utilisation and reduced general practitioner accessibility and increasing GP copayments.18 Furthermore, EDs may appeal to people of working age, with the convenience of 24-hour, hospital-based, specialised multidisciplinary health care with no copayments.19

Over the study period, ED LOS increased for more urgent and admitted patients, suggesting much of the ED burden is associated with admitted patients. This could be related to overcrowding and increased waiting times from rising demand and access block.20 The contribution of overcrowding to adverse outcomes is well documented.7,20 Longer LOS is also associated with greater risk of short-term mortality and adverse events in patients requiring admission.21 Increases in ED LOS have implications for the implementation of the 4-hour National Emergency Access Target.22 This Australian health reform initiative, designed to address ED waiting times, currently proposes 90% of patients be admitted, referred elsewhere or discharged within 4 hours.22,23 The increase in LOS suggests this target may not be achievable in the current system of care and context of persisting growth in demand, particularly by older patients. Introduction of this target must be accompanied by strategies to ensure patient safety is not compromised.23

Increasing efficiency alone is unlikely to meet this demand. Fundamental restructuring of our models of care is necessary. Initiatives providing increased medical and nursing support for residential care and improved community-based chronic care programs are already being piloted. Expectations of the care that emergency health services should provide for older people also need discussion.

The strength of this population-based study is that it analysed 10 years of data including > 7 million ED presentations. This study was based on routinely collected metropolitan data; hence the findings may not be generalisable to non-urban regions. Data quality and consistency are reliant on clinicians and clerical staff who work in an environment fraught with multiple distractions.25 We have attempted to identify factors underpinning the increase in demand; however, routinely collected data may not identify all the elements.

We question whether current models of emergency and primary care are failing to meet community needs. This is a major cause for concern, considering the investment that has been made to date in the many interventions targetting demand. There is no routine capture of information about many factors that are thought to affect ED demand. These include access to GPs, patients’ expectations of timely care, and the convenience of a 24-hour “one-stop shop”. Urgent clarification of the impact of such factors is needed, to provide the evidence base on which to design alternative strategies for managing demand.

1 Factors and VEMD categories used in the analysis 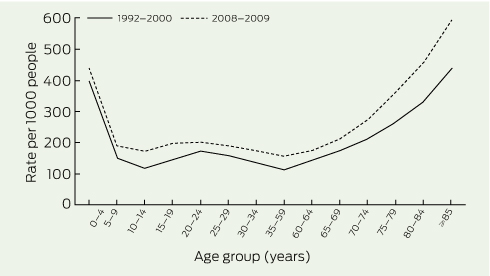 4 Adjusted log-linear model looking at effects of age on public hospital ED presentations in Melbourne, 1999–00 to 2008–09* 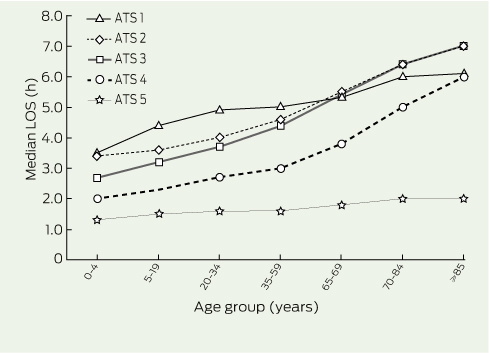