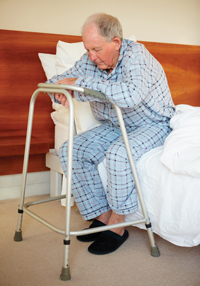 With a staggering 85% of nursing home residents worldwide estimated to have osteoporosis, older people living in residential aged care facilities (RACF) are at high risk of fracture, yet most do not receive appropriate fracture prevention therapies. In a position statement arising from the Consensus Conference on Treatment of Osteoporosis in RACFs in Australia (Sydney, July 2009), Duque and colleagues (→ Treatment for osteoporosis in Australian residential aged care facilities: consensus recommendations for fracture prevention) present consensus recommendations for fracture prevention in RACF residents. Among these is a recommendation for universal vitamin D supplementation.

Fragility (minimal trauma) fractures are associated with significant disability as well as increased mortality. Osteoporosis is confirmed in about half of fragility fractures, yet many patients with such fractures do not receive anti-osteoporotic treatment. Inderjeeth and colleagues (→ A multimodal intervention to improve fragility fracture management in patients presenting to emergency departments) developed a multimodal intervention to try to increase appropriate investigation and treatment in patients presenting to the emergency department with fragility fractures. The intervention, which included providing patients with written information about osteoporosis and advice to have their osteoporosis risk assessed, did lead to some improvements.

In Australia, cystic fibrosis (CF) is the most common life-limiting genetic disease in children of European ancestry. However, many people have little awareness of the severity and heritability of the disease, and are unaware that CF carrier testing is available. Currently, for those without a family history of CF, carrier testing is available in Australia on a user-pays basis. Modra and colleagues (→ Ethical considerations in choosing a model for population-based cystic fibrosis carrier screening) propose that a government-funded, population-based CF carrier screening program would offer greater equity of access. By presenting three models, the authors explore how an ethically acceptable national screening program might be offered.

Increasing rates of child abuse and neglect in Australia are a cause for ongoing concern. Hospitals have an important role in identifying suspected non-accidental injuries, but are children presenting to hospitals with suspected maltreatment being referred to child protection agencies? O’Donnell and colleagues (→ The use of cross-jurisdictional population data to investigate health indicators of child maltreatment) found that most children with suspected maltreatment presenting to hospitals in Western Australia between 1990 and 2005 (prior to mandatory reporting in WA) were notified to child protection agencies; furthermore, most of these notifications were substantiated.

Strategies to expand our health workforce have recently focused on increasing education places and recruiting workers from overseas. Leach and colleagues (→ Lost opportunities with Australia’s health workforce?) examined Australian Bureau of Statistics 2006 census data on the employment status of Australians in 12 health professions, finding that retention rates varied greatly across professions, and that many health professionals were not employed in the occupation for which they held qualifications. The authors suggest a more immediate means of increasing the health workforce may be to retain more of our existing health professionals and to attract those no longer working in these occupations to return to them.

Try to honor your children lest they dishonor you.