Exsanguinating haemorrhage is the major cause of death in current military conflict operations.1,2 Recent data from Afghanistan and Iraq have shown that up to 15% of combat casualties require massive transfusion for traumatic injuries, with a mortality rate of 20% – 50%.3,4 This is a significantly higher proportion than in most civilian trauma centres, reflecting the severity and polytrauma of blast-associated injuries.

Current battlefield resuscitation practice focuses on early diagnosis and management of haemorrhagic shock, with the aim of rapidly reversing the lethal triad of acidosis, hypothermia, and coagulopathy, using aggressive resuscitation with a 1 : 1 : 1 ratio of red cells to plasma to platelets, and recombinant factor VIIa if required.5,6 Surgical intervention is focused on controlling haemorrhage and contamination (damage control), with definitive care delayed until normal coagulation and metabolic function have been restored.

Current options for provision of blood and blood products include fresh liquid supply, “walking donor panels” (people who are prepared to be called on to meet a particular emergency), and frozen blood products.

Supply of fresh liquid blood to combat areas is logistically challenging. Some military forces use pre-screened walking donor panels. However, this practice carries a risk of disease transmission, relies on the availability of appropriate donors, and restricts their duties for a period after donation, with implications for combat readiness (eg, infantry soldiers are probably not fit for combat for at least 24 hours). Blood salvage is not used in the combat environment.7

Historically, the Australian Defence Force (ADF) has relied on fresh blood supplies from the Australian Red Cross Blood Service. But in recent ADF operations in the Middle East, where obtaining supplies of fresh blood is not feasible because of time and distance factors, Australia has been reliant on a Dutch national supply system. The Netherlands armed forces use a sophisticated system for supply of liquid and frozen blood products (red cells, plasma and platelets).8

Here, we review the ADF’s experience with frozen blood products in Afghanistan.

Frozen red cells have been used on deployed military operations since the Vietnam war.9 Using frozen blood during military operations is appealing, as it avoids many logistic resupply issues and extends the shelf-life compared with liquid blood. Deep-frozen red cells can be stored at – 80°C for at least 10 years,10 deep-frozen plasma (DFP) for 7 years and deep-frozen platelets for 2 years.11

The Netherlands developed a state-of-the-art frozen blood component system during North Atlantic Treaty Organization operations in Bosnia in the 1990s.7 In 2002, universal frozen blood products were introduced, including a frozen platelet system. This is the system now in place at the Uruzgan Medical Centre (UMC) at Tarin Kowt in Afghanistan, where the ADF embedded a surgical and intensive care team into the Netherlands-led forward health facility in 2008.

All blood products are sourced from the Netherlands Sanquin Blood Supply Foundation and derived from an unpaid volunteer donor pool.8 Blood is screened and tested in accordance with national and international guidelines. To minimise the risk of transmission of Creutzfeldt–Jakob disease, blood donations are not accepted from people who have a history of transfusion or have lived in the United Kingdom for more than 6 months between 1990 and 1996.12,13

Red cells are frozen in 40% glycerol (w/v) and transported from the Netherlands in temperature-monitored containers (TempTale [Sensitech, Beverly, Mass, USA]) maintained at less than – 65°C, and then transferred to a – 80°C freezer at UMC (Box 1).

Three units of red cells can be produced every 90 minutes (this includes 30 minutes’ thawing time). Regular processing allows liquid blood stores to be replenished to maintain an immediately available supply. The shelf-life of red cells after thawing and processing is 14 days at 2 – 6°C. Cell vitality studies show a mean freeze–thaw–wash recovery value of 90%, a mean 24-hour post-transfusion survival rate of 85%, normal or slightly impaired oxygen transport function, and minimal haemolysis.10

Group AB Rh D-positive plasma is provided as DFP using single-donor apheresis. Plasma is citrated and leukocyte-depleted. DFP is transported at a temperature of less than – 65°C and stored at – 80°C. Thawing takes about 30 minutes. The performance of DFP is almost identical to that of fresh frozen plasma.9

Leukocyte-depleted, volume-reduced frozen platelets are obtained by apheresis from a single donor, cryoprotected in a solution of 4% – 6% dimethyl sulfoxide and stored at – 80°.14 Each unit contains about 300 × 109 platelets (equivalent to 5–6 donor units of fresh buffy-coat platelets). The freezing process induces both morphological and functional changes.15,16 Compared with liquid-stored platelets, frozen platelets demonstrate a higher capacity to bind factor V and higher thromboxane A2 production after stimulation with adenosine diphosphate.16

The thawing time of platelets is about 5 minutes. They are suspended in one unit of thawed DFP. Processing with dimethyl sulfoxide gives frozen platelets a uniquely pungent odour.

The predominant indication for surgery was blast- or gunshot-related injury. Over 90% of patients were Afghan nationals. No Australian service personnel received blood products during these periods.

The following case studies illustrate some issues related to the use of frozen blood products.

On 2 February 2009 at 08:20, a suicide bomber self-detonated at the Afghan National Police training barracks in Tarin Kowt, resulting in 22 deaths.

A 25-year-old man presented with a blood pressure of 115/80 mmHg, a pulse of 120 beats/min, and a Glasgow Coma Scale score of 15. He had a left flank entry wound with no exit wound. His abdomen was distended, and frank haematuria was apparent in urine collected via a urinary catheter. A Focused Assessment with Sonography for Trauma (FAST) scan gave positive results. There was no obvious chest injury. His initial haemoglobin level was 154 g/L. Resuscitation included rapid infusion of 5 units of non-crossmatched red cells before surgery.

Laparotomy revealed free intraperitoneal bleeding, jejunal blast perforations, liver laceration and non-expanding left pelvic haematoma. The spleen was intact. There was a colonic contusion and a mesocolic haematoma. The lower pole of the kidney was macerated, with bleeding into the renal pedicle. A damage-control approach was adopted, involving stapled exclusion of the small bowel, left nephrectomy, packing and laparostomy. The patient was transferred to the intensive care unit (ICU) for a planned return to theatre within 24 hours.

The patient remained haemodynamically stable in the ICU. Coagulation studies the following morning showed an activated partial thromboplastin time (APTT) of 14.6 s (reference range [RR], 28–40 s); and a prothrombin time (PT) of 19.9 s (RR, 10–16 s). At definitive laparotomy, surgical packs were densely adherent, but there was no evidence of ongoing bleeding. The patient’s further postoperative course was largely unremarkable. On discharge from the ICU at Day 3, his haemoglobin level was 114 g/L.

On 28 February 2009 at 14:50, a 20-year-old man presented with gunshot wounds to his left foot and upper right thigh. There were no other injuries.

On arrival, he was severely shocked, with poor capillary perfusion, systolic blood pressure of 60 mmHg and a pulse of 130 beats/min. He was distressed and, within minutes, lost consciousness. Examination revealed anterior entry and posterior exit wounds to the right thigh, with a large haematoma and compartment syndrome.

At 15:10, he was in the operating room. His core temperature was 33.5°C, and blood gas measurements showed severe acidosis, with a base excess of – 21 mmol/L.

After receiving 1 L of saline in the emergency room, the patient was given four non-crossmatched units of red cells, three units of DFP and one unit of DFP with platelets within 40 minutes. A further eight units of red cells, six units of DFP and two units of DFP with platelets were administered over the following 3 hours. Active warming was used throughout surgery. After leg reperfusion, the patient required intravenous administration of calcium gluconate, insulin and dextrose because there were electrocardiographic signs of severe hyperkalaemia.

Two doses of recombinant factor VIIa were given (initially 100 μg/kg and then another 60 μg/kg midway through the 4-hour procedure).

Resuscitation continued immediately after the operation, with the patient receiving a total of 16 units of red cells, 15 units of DFP and four units of DFP with platelets. In anticipation of potential myoglobinaemic renal failure, a forced diuresis regimen was undertaken for the next 24 hours. The patient’s condition remained stable, without signs of clinical or laboratory coagulopathy. He was evacuated to another facility 24 hours after surgery.

These cases demonstrate the use of integrated liquid and frozen blood components for patients with battlefield trauma. Non-crossmatched units were used immediately, with formal crossmatching, typing, antibody screening and agglutination tests performed as soon as practicable. The cases illustrate that, in an austere environment or during mass casualty events, decisions must frequently be made on clinical grounds, often without recourse to investigations.17

Except in Case study 2 (described here), there was no clinical evidence of coagulopathy in patients treated with blood products at UMC — an unusual observation given the severity of the injuries (median injury severity score, 41; range, 4 – 75). Aggressive management of hypothermia was practised, including maintaining emergency and operating room temperatures above 28°C, active patient warming, and warming of all intravenous and irrigation fluids to 40°C.

Our experience with “re-look” laparotomy was that packs were densely adherent. Despite simple measures such as irrigation to facilitate removal of packs, serosal damage and liver surface bleeding occurred, but these were easily controlled. We postulate this may be a thrombin-type effect related to activated platelets. This effect has not previously been reported and requires investigation.

Recent operations in the Middle East have identified potential requirements for frozen blood products, particularly platelets, in military trauma settings. In partnership with the Australian Red Cross Blood Service, the ADF is investigating the utility of frozen platelets within the Australian therapeutic regulatory framework. Australian doctors should become familiar with the use and efficacy of these blood components.

Integrated fresh–frozen blood banking provides flexible and efficient use of blood products in a military setting. Despite infrastructure costs, it is logistically appealing and minimises wastage.

As the pendulum swings towards early component therapy in trauma resuscitation, the use of an integrated fresh–frozen blood bank may also help to meet the logistical and geographical challenges of supplying blood products to people in rural Australia.

1 Inside the blood bank container 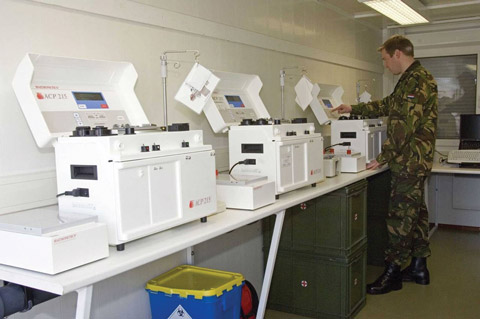 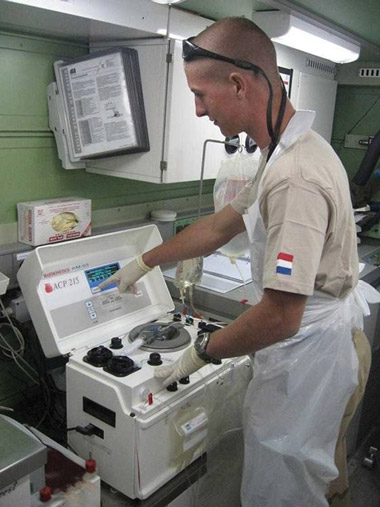 We thank Colonel Leonard Brennan of the ADF, and Lieutenant Colonel Willem Sandberg, Warrant Officer Michael Lam, Corporal Freek Dekker and Sergeant Jorrit ten Broeke of the Royal Netherlands Army for their valuable assistance, advice and patience. The opinions or assertions contained in this article are those of the authors and are not to be construed as official or reflecting the views of the ADF.