“Closing the gap” by opening hearts 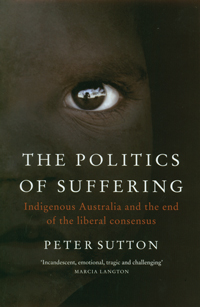 Have you spent a day or three in a sweltering clinic in a remote Aboriginal community in northern Australia? No? Then read this book, for you will learn why the appalling state of Aboriginal health heads the list of national moral and political challenges. It may encourage you to fill the second gap, that between rhetoric and action, needed to “close the gap” (in health and life expectancy between Indigenous and non-Indigenous Australians).

Sutton’s polemic is a cri de coeur from a true warrior. From the early 1970s, his academic interest in Indigenous language and sacred art led to a life-long deep engagement with the Wik people, and to a role in negotiations that have led to landmark political achievements.

In the first chapters, he urges a critical re-analysis of causality beyond that of systematic oppression. He argues that more recent dislocations have stressed beyond tolerance the tension between the conflicting imperatives towards modernity versus traditional social values, and that these are relevant in accounting for the endemic domestic violence, alcohol abuse, and ill-health in remote communities.

Halfway through the tone mellows, and the reader is treated to a series of charming vignettes of “Unusual Couples”; stories of deep black–white friendships in the landscape of Indigenous history. These lead into his final chapter, “On feeling reconciled”, where we are challenged to confront our own moral thought patterns: Is collective reconciliation about the politics of appeasement? Are our notions of apology and reconciliation, based on European moral and intellectual traditions, compatible with an Aboriginal morality forged over 60 000 years in this land?

Sutton navigates us through this moral maze to the conclusion that reconciliation is a personal experience. This fits with what an Aboriginal writer told me in my own searching: “You change one heart at a time.” Sutton’s book should open many hearts to being changed, one at a time.