Tom was born in Lynton, United Kingdom, on 1 February 1920. He was educated at the King’s School in Canterbury and at University College, Oxford, graduating in medicine in 1943. 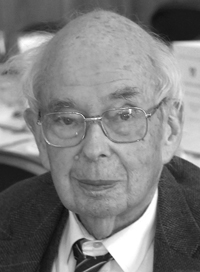 After doing war service with the Royal Army Medical Corps, Tom pursued postgraduate studies at the Boston Children’s Hospital in the United States. He later returned to England to work at St Mary’s Hospital in London, where he was involved in studies of childhood electrolyte abnormalities, particularly hypernatraemia. This was a stimulating time in his career, working with a very active group of paediatricians, many of whom became leaders in their fields in the UK, the US and Australia.

In 1960, Tom succeeded Sir Lorimer Dods as Professor of Paediatrics at the University of Sydney and at the Royal Alexandra Hospital for Children. He became very active in international child health and was very influential in this field through his appointments as Secretary-General (1965–1974) and Treasurer (1974–1977) of the International Paediatric Association (IPA). The IPA includes about 140 national paediatric societies and has about 500 000 paediatrician members. Through the IPA and his extensive international travels and contacts, he was able to advocate strongly for better health and the related needs of children worldwide, particularly in developing countries. He had access to many powerful political and policy leaders around the world, including rulers such as Mao Zedong and Indira Ghandi. He frequently visited the People’s Republic of China and was a keen Sinophile.

Tom spoke strongly over many years for Australia and its paediatricians to be hosts to the triennial International Congress of Pediatrics. Despite physical frailty, he attended the most recent Congress in Athens in late August 2007 and strenuously supported Australia’s formal bid. He was delighted with Australia’s success in being chosen to host the Congress in Melbourne in 2013.

After retiring from the University of Sydney, Tom returned to England. Over the years, he was a generous host and enjoyed having many of his old friends and other guests stay at his charming cottage in rural Buckinghamshire. He also provided many Chinese and Russian postgraduate students with board and lodging during their studies. He died at home peacefully in his sleep.