John (“Jack”) Henry Alpers died on 2 November 2007 at his home in Adelaide after battling all year with leukaemia. He was one of the founding leaders of the Flinders University School of Medicine and its major teaching hospital, Flinders Medical Centre.

Jack was born on 3 April 1936 in Mannum, South Australia, where his father was a general practitioner. When Jack was 8 years old, the family moved to Adelaide, where he continued his education at St Peter’s College. He then followed his father to study medicine at the University of Adelaide. 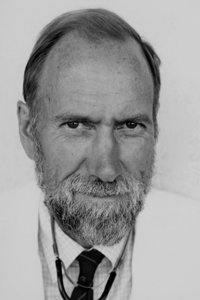 After graduating in 1960, Jack undertook his initial training at the Royal Adelaide Hospital. This was followed by further formative experiences in Papua New Guinea (New Britain and Port Moresby), the United Kingdom (Hammersmith Hospital, London), the United States (University of Colorado Medical Center, Denver, Colo) and Sweden (Karolinska Hospital, Stockholm). He qualified as a consultant physician with a subspecialty interest in respiratory medicine. Before arriving at Flinders University, he worked as a consultant in Adelaide, Papua New Guinea and Canada.

In August 1976, Jack joined the staff of the recently opened Flinders Medical Centre as Head of Respiratory Medicine and Deputy Head of the joint Flinders University/Flinders Medical Centre Department of Medicine. He continued in both roles until his retirement in 2001. An excellent leader in his own clinical discipline, with a commitment to the highest standards of teaching hospital medicine, Jack built a team of talented clinicians, clinical scientists, nurses and administrative staff. He was a gifted and compassionate physician with a particular human touch and a quietly flamboyant personal style. His lifelong interest in social justice was greatly appreciated by all his patients, particularly those with occupational lung disease. An excellent and highly respected clinical teacher and mentor to several generations of medical students and junior doctors, he was also a committed leader in the Flinders School of Medicine and highly valued as a great “team player”.

Flinders University appropriately recognised Jack’s contributions by his promotion to Professor in 1997, the award of Emeritus Professor status on his retirement, and the presentation of a Vice-Chancellor’s Award for Excellence in Teaching in 1998. In 2002, he was nationally recognised by the award of Membership of the Order of Australia.

Jack is survived by his wife Liz, his children Sarah, John and Liza, and his brother Michael, also a medical graduate and a world authority on kuru.