Amphetamine use may be placing a high burden on hospital emergency department resources, say Gray et al, after analysing presentations to the ED over 3 months at Royal Perth Hospital (→ Amphetamine-related presentations to an inner-city tertiary emergency department: a prospective evaluation). In a prospective study, 156 of 13 125 presentations (1.2%) were judged by ED staff to be amphetamine related. Most patients (71.2%) were men: half were aged in their 20s, and almost one in four aged in their 30s. Many were regular amphetamine users. They averaged a 6-hour stay in the ED and consumed significant resources: 32.1% arrived by ambulance, 66.7% received a triage rating of 3 or less, 32.1% required sedation, 39.7% were admitted to hospital, and 32.7% required psychiatric evaluation. Fulde and Wodak have first-hand experience of the havoc that the drug du jour, crystalline methamphetamine, can wreak in emergency departments (→ Ice: cool drug or real problem?). The solutions, they suggest, will involve boosting health and social interventions rather than stronger law enforcement.

According to a study from Victoria, obese patients have an increased risk of some complications after cardiac surgery, but not of death (→ Obesity and early complications after cardiac surgery). Examining data collected prospectively from six hospitals between 2001 and 2006, Yap et al found that 28.6% of 11 736 patients who underwent cardiac surgery were obese (BMI > 30 to < 40) and 1.8% were morbidly obese (BMI ≥ 40), higher than the expected combined prevalence of 21.2%. These patients were no more likely than patients of normal weight to die, or suffer a stroke, myocardial infarction or pneumonia after cardiac surgery, or to be re-intubated or returned to theatre for any other reason. However, both obese and morbidly obese patients were more likely to experience renal failure and deep sternal wound infection, while morbid obesity was associated with prolonged ventilation, prolonged hospital stay, and readmission to intensive care.

The supplement included with this issue expounds the much anticipated Australian Curriculum Framework for Junior Doctors. The Framework represents Australia’s chance to reclaim the “lost opportunity” of continuing the training of medical graduates throughout their prevocational years. In “Challenges and change in medical training: the Australian Curriculum Framework for Junior Doctors”, Van Der Weyden describes it as a giant step forward for safety and quality of health care but cautions that it will only be successful if all those with an interest in postgraduate training work together to make it so. 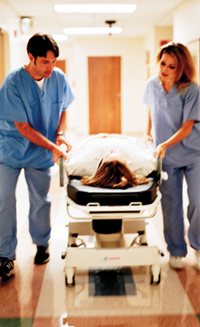 General practice placements should be considered for inclusion in intern training programs across Australia, urge Martin et al, in a qualitative article about this relatively new initiative in South Australia (→ General practice placements for pre-registration junior doctors: adding value to intern education and training). In 2005, eight GP placements were made available to interns in the state, and 20 participating interns were interviewed for the study. Not surprisingly, they described different knowledge and skills acquisition in general practice compared with hospital terms. General practice was seen as more patient-focused, providing opportunities for one-on-one consulting, decision making, and using clinical judgement. Both the hospital and the GP experience were highly valued for their enhancement of professional and personal growth.

Our data suggest MAP [methamphetamine] users utilize prehospital and hospital resources at levels higher than the average ED population. Based on current trends, we can expect more ED visits by MAP users in the future.