Hatzolah emergency medical responder service: to save a life

Cardiac arrest is a time-critical medical emergency, with a reported incidence in Australia of 0.72 cases per 1000 population per year.1 Rapid access to defibrillation is important, as ventricular fibrillation (VF) is a common, early cardiac arrest rhythm that responds to electric shock.2,3 However, VF deteriorates to a non-shockable rhythm with time,4 and defibrillation is rarely successful if the duration of VF extends beyond 10 min.5,6

In August 1997, Victoria’s Metropolitan Ambulance Service (MAS) had a 90th percentile response time to Code 1 emergencies (time-critical case, ambulance proceeds with lights and sirens) of 14 min.7 Similar response times have been achieved since then and, in 2005, the Code 1 90th percentile response time was 15 min (Mr Ian Patrick, Victorian MAS, October 2005, personal communication). In an attempt to reach a key performance indicator of 12 min for time-critical emergencies, the MAS introduced initiatives to reduce response times. One such initiative was the development of volunteer First Responder groups, including Hatzolah which is described here.

The development of First Responder groups

A first responder has been defined by the Australian Resuscitation Council as “a person competent in advanced first aid, which includes oxygen therapy and the use of an automated external defibrillator, working within a medically supervised and accountable system”.8 First responders, including firefighters and civilian groups trained and equipped with automatic defibrillators, can respond simultaneously with the MAS to cases of suspected cardiac arrest and other medical emergencies. The mean (SD) combined firefighters and ambulance response time to cardiac arrest patients has been reported as 6.0 (1.7) min and the mean time to defibrillation for patients with VF as 8.8 (2.1) min.9 Importantly, for most patients who survived (71%), response times were 6 min or less; response time was no more than 10 min for any survivors.9

Hatzolah was established in metropolitan Melbourne in 1995, and three First Responder groups were established in rural Victoria in 1996 — Craigieburn, King Lake and Lang Lang. 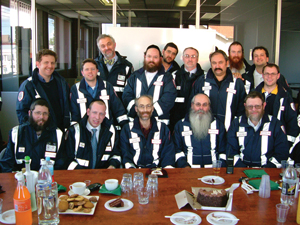 What and who is Hatzolah?

Hatzolah is derived from the Hebrew word, lehatsil, meaning to save. The original Hatzolah was a First Responder agency formed by Orthodox New York Jews in 1973 to provide a service to the local community. They were trained in basic first aid and cardiopulmonary resuscitation (CPR), and were equipped with oxygen. Since then, Hatzolah First Responder groups have expanded to over 1000 units in New York State. Other Hatzolah groups have been established all over the United States and in other countries including Israel, the United Kingdom, Canada, Mexico, South Africa and Australia.10,11

Hatzolah, at its core, is a religious organisation. Under rabbinical directive, it operates according to halakhic (Jewish legal) principles. One such principle is known as pikuah nefesh, the duty to save the life of one’s fellow human being, should he or she be in mortal danger. Another is the understanding that “a person who saves one life is as if he saved a whole world” (Talmud; Tractate Sanhedrin 8: 1). As a demonstration of the religious principle of preserving or saving life on the Sabbath, the religious first responders of Hatzolah are able to drive and perform clinical duties, in compliance with the directive that “Shabbat, like all the mitzvot [commandments], is pushed aside by danger to human life” (Rambam, Zmanim 2: 1).

Hatzolah was established to provide appropriate medical treatment (until the arrival of an emergency ambulance) to the Melbourne Jewish community in East St Kilda, St Kilda, Elsternwick, Caulfield, Caulfield North and South, Balaclava, Elwood and Ripponlea. One of the driving forces for its establishment was the recognition by the MAS of the low numbers of “call-outs” for chest pain in the area. There was a belief that, as the population included the highest density of Holocaust survivors outside Israel, the community was reluctant to make contact with a “uniformed” external agency. Thus, Hatzolah has fulfilled a go-between role, which has led to an increase in MAS calls in the area.

Other reasons that prompted the establishment of Hatzolah included the recognition of the care needs of Melbourne’s ageing Jewish population and their specific cultural, religious and emotional needs, and a concern that a large number of elderly people in the Jewish community did not have a good grasp of the English language.

Hatzolah is funded entirely from private donations from within the community it serves.

Hatzolah is an independent and autonomous organisation with close links to the MAS. It operates under adapted MAS clinical practice guidelines, and its clinical governance process includes a Medical Standards Committee, which has high-level MAS membership. A memorandum of understanding outlines the relationship between the two organisations. In addition, Hatzolah has its own ethical and religious review boards.

MAS staff train all Hatzolah responders. Each volunteer must complete an 18-month training course and become familiar with MAS clinical practice guidelines as they apply to the areas of patient care provided by Hatzolah. Volunteer first responders undergo refresher training in first aid, CPR, and the use of semiautomated defibrillators and oxygen therapy under the supervision of the MAS and their own emergency physician–medical director. Specific accreditation programs have been designed to enable responders to administer the emergency drugs — sublingual nitroglycerin, and spacer and nebulised salbutamol. A program for the future introduction of inhaled methoxyfluorane has been established.

Responders are equipped with a semiautomated defibrillator (Laerdal Heartstart 3000QR, Laerdal Heartstart FR2 or Cardiac Science Powerheart AED G3); a medical bag with first aid, oxygen, and suction equipment; sublingual glyceryl trinitrate tablets, salbutamol and nebulisers. All equipment is carried in private vehicles. Each responder carries a Motorola two-way radio in operational mode for most of the time.

In the geographical area serviced by Hatzolah, residents are instructed to call 000 before calling the Hatzolah number. Instruction stickers have been distributed widely and are placed on residents’ telephones. On receipt of a call to the Hatzolah dispatcher, the request for a responder is sent to all responders by two-way radio. Those in the area respond immediately. Three responders are dispatched on a “closest to scene” basis. Responders 1 and 2 manage the patient (including CPR and defibrillation) and Responder 3 liaises with the family and the MAS on their arrival.

As all responders live and work in the community, they are likely to arrive at the scene quickly, prior to 000 Emergency Services. If Hatzolah responders arrive after the MAS, assistance is given with CPR and family liaison, where appropriate. The families of patients with cardiac arrest who are transported to hospital are followed up by telephone, where possible. Such cases are audited by the Hatzolah operations manager and an MAS group manager and noted at the MAS Medical Standards Committee. 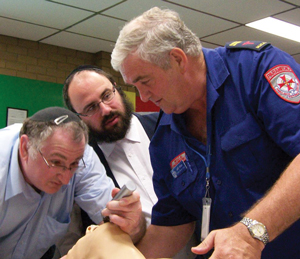 In its first 11 years of service (1995–2005, inclusive), there was a linear rise in attendances by Hatzolah — it is currently attending about 2.5 patients daily (Box 1). A large range of patient complaints are managed, although the most common are injuries related to falls, chest pain and respiratory distress (Box 2).

As cardiac arrest is a time-critical event, a first responder’s performance in this circumstance is important. Between March 1996 and December 2004, Hatzolah attended 72 “cardiac arrest” calls, with a median response time of 2 min. Of these calls, 35 patients had true cardiac arrests and their details are described in Box 3. Overall, the Hatzolah response times to these patients were very short, and they were the first to attend the patient in 29 instances (83%). Overall, few patients (6; 17%) received bystander CPR before Hatzolah arrived. Nineteen patients (54%) were resuscitated and transported from the scene alive, and 16 patients (46%) died at the scene. These two patient groups were comparable, although significantly more patients who were transported had a shockable cardiac rhythm (VF). In total, 11 patients (31%) had VF; nine of these patients (82%) survived to be transported to hospital, and five survived (45%) to hospital discharge. These five patients represented an overall survival to hospital discharge of 14%.

In out-of-hospital cardiac arrests, the concept of “chain of survival” predicts that more people survive when a sequence of “early access to emergency medical services, basic life support, defibrillation and advanced care” occurs as rapidly as possible.4 Yet in Australia, the mean ambulance response time to cardiac arrest is 8–10 min, even in metropolitan areas.9,12 In its first 11 years of operation, Hatzolah demonstrated that it can respond to an emergency rapidly, often before the MAS. This has been important, particularly for patients with cardiac arrest, as they can initiate basic life support (CPR and defibrillation) before the availability of advanced life support.

The number of patients with cardiac arrest attended by Hatzolah is relatively small. For these patients, the rate of bystander CPR was low compared with the rates of 22% and 34% reported in Melbourne1 and international13 studies, respectively. Despite this, the rate of survival to hospital was greater than the rates of 18.1% and 12.6% reported in another Melbourne study9 and in one large prospective cohort study,14 respectively. Furthermore, the rate of survival to hospital discharge was greater than the 3.0%–7.2% reported elsewhere.9,12-14 The finding that the majority of patients with VF were resuscitated and transported is consistent with reports that VF arrests have a better survival rate that non-VF arrests.15-17

The consistently rapid Hatzolah response times are likely to be associated with these good outcomes. In this regard, Hatzolah is well placed to complement existing MAS services. There are currently no other Victorian metropolitan-based First Responder groups with which to compare Hatzolah’s performance. Comparisons with the rural groups are difficult because of their different setting. However, the three rural groups, which provide early clinical assistance in medical and trauma emergencies to residents of their local area, have response times of about 4.5 min (compared with the mean time before ambulance arrival of 14–18 min).

Hatzolah has evolved into an organisation providing all people in its local community with rapid access to appropriate medical assistance. Its acceptance by and importance to this community is reflected by the linear growth in call-outs received. This growth is expected to continue as demand for the service extends increasingly to people outside the Jewish community. The challenge, therefore, is to maintain the quality of its service in the face of this increased demand. Hatzolah provides a model for the establishment of other metropolitan community First Responder groups. We would encourage community and government agencies to establish similar First Responder groups where a perceived need exists.

3 Hatzolah cardiac arrest patients who died at the scene or were transported to hospital. Data are no. (%) except where otherwise indicated