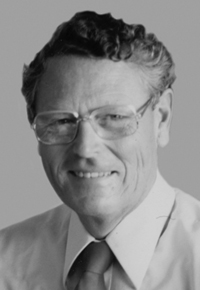 Alan Jennings was a pioneer in the field of child psychiatry whose visions were realised in his own lifetime. He was born on 10 June 1923 in Hull, UK, and completed his schooling there. At the outbreak of war in 1939, his mother migrated to Sydney with her three children. Alan graduated in medicine from the University of Sydney in 1945. After working for a short period in the NSW Department of Health, he went to Manchester to do a Diploma in Psychological Medicine.

Returning to Australia in 1950, Alan worked at Yasmar Child Guidance Clinic in Sydney until 1954, when he became Director of the Brisbane Street child guidance clinics. These were teaching and training clinics for students in psychiatry and social work linked to the University of Sydney’s Department of Psychiatry.

Alan soon realised that some children needed treatment in a residential unit. He was awarded a travelling grant to study residential care for emotionally disturbed children in the United States and the United Kingdom. In 1959, he established Australia’s first unit for emotionally disturbed children at North Ryde Psychiatric Centre. In a twin ward, he opened the first demonstration unit for 20 mentally retarded boys to show the advantages of having a much higher than usual ratio of nursing staff to patients. He also opened a ward for severely to grossly mentally handicapped children aged under 2 years, many of whom were also physically handicapped. He imbued all staff with a positive, caring philosophy.

Alan was the first Director for the Mentally Handicapped in the NSW Department of Health (1964–1973), during which time he persuaded the Department to buy Renwick Children’s Hospital in Summer Hill to establish the first diagnostic unit for retarded children.

Alan was Director of Marsden Hospital, Westmead (the first purpose-built institution for mentally retarded children), from 1969 to 1978. The Department of Health also bought the old King’s School, Parramatta, as a hostel for mentally retarded young men and women transferred from the old “mental retardation hospitals”. Later, group homes were established for selected children and residents from Marsden Rehabilitation Unit.

Alan travelled and studied many times overseas, notably in Denmark and The Netherlands. He lectured at the University of Sydney, Macquarie University, the University of NSW and the NSW Institute of Psychiatry. He was the first President of the Australian Group for the Scientific Study of Mental Deficiency and served on many committees, including the Minister of Health’s Committee in Regard to Mental Defectives and the World Health Organization’s Policy Committee on Mental Retardation.

After retirement in 1979, Alan studied Italian and lectured in art and religion at Adelaide University. Despite being blind in his later years, he had a very focused, enquiring mind and continued to explore many avenues of intellectual learning, including religion, philosophy, ecology and neuropathology.

He died in Adelaide on 19 April 2005 after emergency heart surgery. He is survived by his wife Roleena and children Ian and Susan.