Carriage of methicillin-resistant Staphylococcus aureus in a Queensland Indigenous community

Objective: To determine the prevalence of community-acquired methicillin-resistant Staphylococcus aureus (CA-MRSA) carriage and infection among children living in an Indigenous community in Queensland.

Design, setting and participants: Swabs for culture of S. aureus were collected from the nose, throat and skin wounds of primary school children.

Results: 92 (59%) of 157 eligible children were included in the study. Twenty-seven (29%) carried S. aureus; 14 of these (15% of total) carried MRSA. MRSA was isolated from 29% of wound swabs, 8% of nose swabs, and 1% of throat swabs. Fourteen of 15 MRSA isolates were sensitive to all non-β-lactam antibiotics tested. Eight children (9%) carried CA-MRSA clonal types: six carried the Queensland clone (ST93), and two carried the South West Pacific clone (ST30). All these isolates carried the virulence factor PVL. The remaining six children carried a hospital-associated MRSA strain (ST5), negative for PVL.

Conclusions: We have identified a high prevalence of CA-MRSA carriage in school children from a Queensland Indigenous community. In this setting, antibiotics with activity against CA-MRSA should be considered for empiric therapy of suspected staphylococcal infection. Larger community-based studies are needed to improve our understanding of the epidemiology of CA-MRSA, and to assist in the development of therapeutic guidelines for this important infection.

Community-acquired infections with Staphylococcus aureus have, until very recently, been reliably treated with β-lactam antibiotics. This is in contrast to hospital-acquired infections, where for more than 20 years methicillin-resistant S. aureus (MRSA) has been a problem. In the late 1980s, a strain of MRSA arose spontaneously in remote Aboriginal communities of Western Australia.1,2 This strain, termed WA-MRSA,1 has since become established in western and northern Australia, in both the hospital and the community setting. More recently, community-acquired methicillin-resistant S. aureus (CA-MRSA) has emerged along the eastern seaboard of Australia, with the South West Pacific strain, referred to as Sequence Type 30 (ST30), predominantly affecting individuals of Polynesian descent, and the Queensland clone (ST93) affecting white people.3,4

Although CA-MRSA has predominantly caused skin and soft-tissue infections, invasive life-threatening infection is now being reported, including necrotising pneumonia, septic shock and death.5 The increased virulence of this organism has been associated with a specific virulence factor named Panton–Valentine leukocidin (PVL), a bacterial toxin that can mediate leukocyte and tissue destruction.6 The combination of this enhanced virulence with resistance to the most commonly prescribed antistaphylococcal antibiotics makes this organism an important public health threat.

To date, the prevalence of CA-MRSA in Australia has not been formally assessed by a community-based study. Isolates have been obtained from patients requiring hospital admission, without study of the community prevalence.1-5,7 Collection of prevalence data is critical for formulating health care policies pertaining to empiric antibiotic use, particularly for suspected staphylococcal infections.

Following a death in our hospital caused by CA-MRSA infection in a young adult, as well as a number of serious CA-MRSA infections with epidemiological links to an Indigenous community,5 we undertook a study to assess the prevalence of CA-MRSA carriage in this community.

The study was conducted in an Indigenous community in south-east Queensland with a population of about 2000. In collaboration with local Indigenous community representatives, the local primary school was used as the site for data and sample collection. Most of the town’s children are enrolled at this school. All children from grades one to seven were eligible for the study, which took place over 3 days in October 2004.

After written informed consent had been obtained from parents or guardians, a written questionnaire was completed by parents/guardians to collect demographic and relevant risk factor data. Swabs from both anterior nares and the throat were collected from the participating children. A skin swab was collected from any skin lesions evident on exposed skin. If obvious skin infection was identified, the children and their parents were referred to local health service providers.

All swabs were transported to a central laboratory in Brisbane, and processed within 12 hours. Bacterial isolates were identified and antibiotic sensitivity determined using standard laboratory methods.8 Susceptibility to clindamycin was extrapolated from erythromycin susceptibility unless erythromycin resistance was observed, in which case inducible clindamycin was tested for. Culture and sensitivity results were made available to local health care providers, and parents or carers were advised by letter of the results and recommended action.

Genotyping was performed on all MRSA isolates using a recently developed method that uses seven single nucleotide polymorphisms derived from the multilocus sequence typing database. The presence of the virulence factor PVL and the mecA gene was determined by polymerase chain reaction (PCR).9,10

The project proposal was approved by the community Health Action Group, in keeping with research protocols involving Aboriginal communities. The relevant Queensland Health District Manager and local school principal also gave written support. Approval was obtained from the University of Queensland Ethics Committee. Research staff external to the community worked closely with local staff during all project activities, and a local person was employed as a project officer, as advised by the Health Action Group. The consultative research process is summarised in Box 1.

Ninety-two (59%) of 157 eligible children were included. The remaining children were either unavailable during the study period (n = 2) or consent was not obtained (n = 63). The median age of the study participants was 8 years (range, 5–13 years); 63 (68%) were girls. Each school grade was represented, contributing between 8% and 18% of the study group. Most of the children (93%) had lived in the community for more than 1 year. The 92 children lived in 51 households containing three to 14 people, with 56% having six to 10 residents and 15% having 11 or more. Most children (87%) lived with smokers. Some children (13%) had received antibiotics in the week before swab collection.

Culture results from different swab sites are shown in Box 3. Of the 92 children, 27 (29%) were colonised or infected with S. aureus, including 14 carrying MRSA (15% overall prevalence); isolates from the other 13 children were methicillin-sensitive. All but one of the MRSA isolates were sensitive to all non-β-lactam antibiotics tested. One isolate was resistant to erythromycin and had inducible resistance to clindamycin. In contrast to other studies undertaken in northern Australia, we observed a low rate of carriage of Group A streptococci (one throat, one skin sore).

Three MRSA clonal types were found among the 14 children carrying MRSA (Box 4). Eight children (9%) carried CA-MRSA clonal types: six had the Queensland clone (ST93), and two had the South West Pacific clone (ST30). All these isolates were positive for the virulence factor PVL. The other six children carried a strain previously observed in hospitals (ST5), and all these isolates were negative for PVL. Of note, this strain is distinct from isolates commonly found in Australian hospital settings. ST5 and close relatives are frequently isolated in health care facilities in many parts of the world. However, in Australia, strains of this lineage are isolated from health care facilities much less frequently than other clones, such as ST239.

Of the 24 children from whom skin swabs were collected (in addition to nose and throat swabs), nine (38%) had MRSA; seven of these isolates (78%) were CA-MRSA clonal types. Of these seven CA-MRSA isolates, six were cultured from the skin only and one from the skin and nose.

CA-MRSA has emerged as an important pathogen with the potential to cause life-threatening infections. To date, there have been few population-based studies of CA-MRSA prevalence, and even fewer that have included molecular typing. In this study, we found the community prevalence of MRSA in school children from a Queensland Indigenous population to be 15%, with more than half of these children carrying PVL-positive CA-MRSA strains (9% prevalence). Although the overall S. aureus carriage rate in our study (29%) was similar to that reported by others,11,12 the proportion of participants carrying CA-MRSA was higher than reported in many studies, where prevalence has ranged from 0.2%12 to 2.5%.13

We believe our results warrant a change in empiric antibiotic prescribing in communities that have such high prevalence of CA-MRSA (9%), particularly for patients presenting with life-threatening infections such as severe pneumonia or undifferentiated sepsis. For these conditions, we advocate including vancomycin in empiric therapy while cultures are pending. More commonly, patients present with skin and soft-tissue infections that often respond to drainage alone, but oral antibiotic therapy may be required.

A characteristic feature of CA-MRSA, as observed in our study, is sensitivity to many non-β-lactam antibiotics with useful antistaphylococcal activity, such as clindamycin and trimethoprim–sulfamethoxazole. Of importance, if erythromycin resistance is present, clinicians should avoid clindamycin therapy unless the laboratory has tested for inducible clindamycin resistance. Given the changing epidemiology of S. aureus infections and antibiotic susceptibility in the community, appropriate clinical specimens for culture and sensitivity testing should be collected where antimicrobial therapy is indicated. Other interventions to reduce the prevalence of skin sepsis require consideration. These include public health programs to control scabies14 and the provision of swimming pools.15

Of particular interest, we found that PVL-positive CA-MRSA clonal types were more commonly isolated from skin swabs than from nose and throat. CA-MRSA was isolated from seven of the 24 children who had all three swabs; six of these isolates were from the skin only. The explanation for this site predilection is unclear, but may relate to strain-specific characteristics such as adherence factors. Of note, most children carrying CA-MRSA had some type of wound on exposed skin. In previous studies, skin and soft-tissue infection has been shown to be a risk factor for CA-MRSA carriage.12,16 This association is best explained by the presence of PVL, which is important in the pathogenesis of skin and soft-tissue infections. Our observations suggest that screening using nasal swabs alone may be inadequate for detecting CA-MRSA.17

Limitations of our study include the small sample size and possible selection bias due to differences in carriage between children whose parents agreed to participate and those who did not. Males, who generally have higher rates of carriage of S. aureus, were under-represented. The study was not sufficiently powered to investigate risk factors for acquisition, including household size. Household crowding remains an important and unresolved issue in many Indigenous communities throughout Australia.18,19 Our results relate to a single community and may not be generalisable. However, they do suggest that such organisms may be prevalent in a much wider geographical area. Ongoing and larger community-based studies are needed to improve our understanding of the epidemiology of CA-MRSA. Such studies will guide the formulation of antibiotic policies and the development of preventive strategies for this important infection. 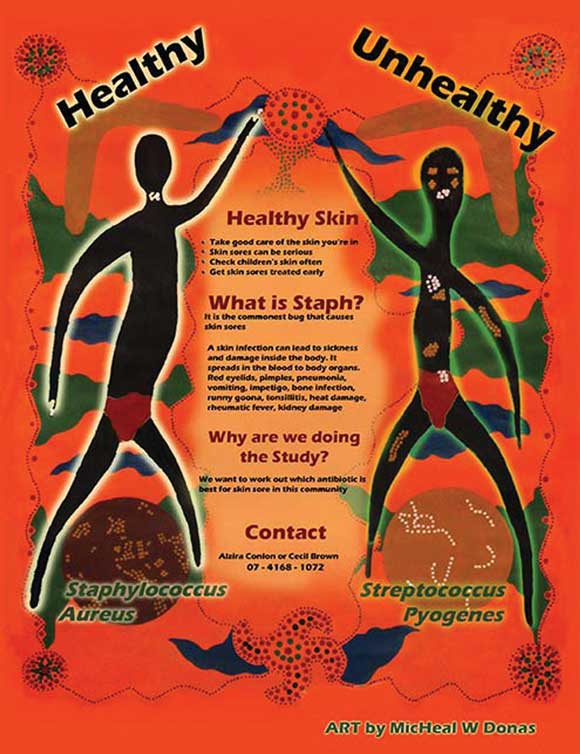 We acknowledge the work of the community’s elders and health and education professionals in giving their advice and their time, particularly Cecil Brown and Chris Sarra. We thank David Drummond and Graham Nimmo for their support, and Margaret Young for providing financial support for the community’s project officer.