Design and setting: (1) A retrospective analysis of jellyfish data forms and charts of 111 patients, identified from Broome Health Service Emergency Department with a discharge diagnosis of marine sting between 1 January 2001 and 1 July 2003. (2) Correlation between climate and Irukandji envenomation data.

Results: 111 patients were prospectively identified with marine stings; 88 were identified with Irukandji syndrome. Non-Irukandji syndrome data were excluded for analysis. The “jellyfish season” extends from January to May, although stings occur all year round. Only 38% of patients had vinegar applied to the sting site before hospital presentation. Signs and symptoms were variable between individuals, with 20% having no signs of sting at all and welts found in 16%. Fifty per cent of patients were hypertensive at presentation. Distress was found in the majority of patients, with 90% requiring opioid analgesia (morphine equivalent: mean, 20 mg; median, 13 mg) and 17% requiring admission. There was one evacuation to Perth with cardiotoxic marine envenomation resulting in pulmonary oedema, which necessitated 4 days in intensive care. Stings were significantly more common when the ambient median temperature was greater than 28.3°C, after midday, on an incoming high tide and on windy days.

Conclusion: The rate of envenomation in northern WA is likely to be the highest currently documented in Australia. There is syndromic variability when compared with the north Queensland experience. This implies different causative jellyfish species that are not yet identified. Stings in Broome can be severe and life threatening; there are significant commercial and public health implications as a result. Management at Broome Hospital is contemporary and effective.

Irukandji syndrome is a collection of hypercatecholaminergic symptoms arising from jellyfish envenomation.1 This variable syndrome includes severe generalised pain, distress, hypertension, cardiomyopathy and cardiogenic pulmonary oedema. Irukandji syndrome was first described in Cairns by Flecker in 1952 and named after the local Aboriginal tribe.2,3 Barnes first correlated Irukandji syndrome with the small box (cubozoan) jellyfish Carukia barnesi.2 The syndrome is well documented in Queensland north of the Tropic of Capricorn and in the Northern Territory,4,5 with two deaths recently reported from north Queensland.6 Although a recent published series of cardiac toxicity and pulmonary oedema from Irukandji syndrome included one case from Broome,7 little is known about the incidence and severity in Western Australia. C. barnesi has never been identified in Western Australia.

The risk of envenomation has a large potential impact on public health, commerce, leisure and tourism in tropical Australian communities.8 Our aims were to characterise the incidence, demographics, and management of Irukandji syndrome in Broome, WA, over the past three seasons, and to correlate the incident data with seasonal and climatic changes.

Broome has a population of about 16 000 from October to March, which rises to about 40 000 in the April to September tourist season.9 This is increasing annually. Broome District Hospital is the sole provider of emergency care.

All jellyfish stings were recorded prospectively using jellyfish data forms. To identify patients with Irukandji syndrome, the medical records of all hospital inpatients and emergency department patients identified by jellyfish forms were examined retrospectively for the period 1 January 2001 to 1 July 2003. Irukandji syndrome was diagnosed if the criteria in Box 1 were met.

The Broome Bureau of Meteorology provided wind speed, moon phase, tides, air temperature, and cloud cover information for the study period. The National Tidal Facility provided data on Broome Port water temperatures. Time of sting was then correlated with meteorological data. A control day (when no sting occurred) was allotted for each case as close as possible from two days before to a week after the day of the sting. Each climatic variable for both case and control days was compared using χ2 with Intercooled STATA 7.10

This process was considered an audit of existing data and did not require ethics approval.

During the study period, 137 jellyfish data forms were collected. Twenty-six forms did not have a corresponding hospital medical record, were duplicated, or were not jellyfish stings (eg, diving-related injuries). These were excluded. Twenty-three were non-Irukandji marine stings. There were no recognised Chironex box jellyfish stings.

Irukandji syndrome was diagnosed in 88 patients (see Box 2 for comparison with north Queensland data). Sixty per cent were locals. Twenty-five per cent of patients identified as Indigenous. Most (57%) were aware of jellyfish risk from swimming, but only 14% stated that they had seen warning signs at the beach. Thirty-five per cent of tourists were jellyfish aware.

The median time of sting was nearly 15:00, with a median 30-minute delay to emergency department presentation. Ninety per cent of stings occurred from January to May (Box 3).

Nearly 80% of all sting sites had either erythema or welts. The average pain score was 9/10. Most patients were distressed on presentation, and tachycardia and systolic hypertension were prominent features in about half (Box 2). Almost a third of patients had vomiting, diaphoresis or flushing (Box 5), but 28% complained of severe pain without additional signs.

Of the 58% of Irukandji syndrome victims who had vinegar applied to the sting site, two-thirds received it before hospital arrival. Opiate analgesia was required by nearly 90% of all adults. The average adult morphine-equivalent given was 20 mg (median, 13 mg; range, 5–90 mg). Three patients received intravenous magnesium sulfate as a bolus or infusion (10–80 mmol) before receiving opiates. In all three patients, the initial response to magnesium was dramatic, with reduction in pain scores from 10 to less than 5 within minutes. In all three patients, although magnesium infusions were established at different times, the infusion alone was ineffective in establishing effective analgesia, and breakthrough pain occurred between 15 and 35 minutes. Fifteen people were admitted to hospital (median stay, 1 day). Two patients developed pulmonary oedema, one requiring air evacuation and a 4-day stay in a Perth tertiary hospital intensive care unit.7 The other recovered in Broome.

This is the first reported series of Irukandji syndrome in WA and the second-largest collection of hospital records nationally.5,11,12 Cairns averages 40 Irukandji stings per season, with about a million people swimming each year (Dr J Seymour, Senior Lecturer, School of Tropical Biology, James Cook University, Cairns, personal communication, December 2003). Considering the relatively small local and tourist populations in Broome, with about 75 000 per season swimming at Cable Beach in 2003 (Mr Jason O’Donnell, Broome Shire Beach Inspector, personal communication, December 2003), the rate of Irukandji syndrome in Broome may well be the highest currently recorded in Australia.11

Irukandji syndrome is frightening and can be severe. In comparison to patients in Cairns, where 61% of victims received opiate analgesia, patients presenting to Broome Hospital complained of greater distress and more pain. Nearly 90% of all adult patients required opiate analgesia, but only a quarter of these required hospital admission.

At Broome Hospital, three patients received magnesium sulfate. Recent reports suggest a role for magnesium in cases requiring large doses of opiates.20 Although the initial clinical response to magnesium in all three was dramatic, its role in treatment remains to be formally evaluated.21

Particular climatic conditions appeared to be associated with a higher probability of Irukandji stings in Broome. These include water temperature above 28.3°C, wind speed greater than 15 km/h, incoming high tide, and swimming after midday. This contrasts with Cairns climate correlations (see Box 2),11 and may simply reflect ecosystem variance or preferred swimming conditions for people.

As the population of the Broome region grows and more tourists come to its beaches, the problem of jellyfish stings is likely to increase. Currently, there is no information on jellyfish ecology in Broome. C J M is obtaining nematocyst skin scrapings and researchers are harvesting jellyfish for identification (unpublished data, and Dr J Seymour, personal communication, April 2004). C. barnesi has never been identified in WA. Based on clinical differences with Cairns and Darwin data, another jellyfish species is probably the cause of Irukandji syndrome in Broome.

We believe this data collection is an underestimate of the actual numbers of Irukandji syndrome in the region. Firstly, several jellyfish records were excluded because of inadequate data. Secondly, pearling companies record up to a further 15 Irukandji syndrome cases annually that are treated on board dive boats (Mr Paul Cookson, Training and Safety Officer, Broome Pearl Producers, personal communication, May 2004). Furthermore, no denominator data were available to determine numbers swimming in the water. This information is currently being collected and will give real meaning to the Irukandji database in Broome. Finally, no data were collected from other northern WA coastal Aboriginal communities or other coastal hospitals of north-west WA.

Irukandji syndrome in Broome is a recently recognised and increasing health problem. The rate of envenomation is likely to be the highest currently documented in Australia. Clinical features of Irukandji syndrome in Broome differ from the eastern experience, probably implicating a different causative species of jellyfish. Magnesium therapy seems promising as a novel agent in severe envenomation. Cooperation between the relevant health, shire and pearl-diver stakeholders will inform a pre-emptive management plan for this emerging health risk in northern WA. 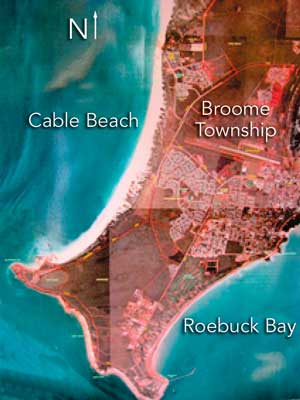 The patient has given consent for publication of this photograph.

The authors wish to thank Dr Mark Little for his suggestions on the manuscript. We also wish to thank the Broome Hospital Emergency Department and Medical Records staff.