The Irukandji syndrome was named in 1952.1 It is the set of severe systemic symptoms that occur some 30 minutes after some jellyfish stings.2,3 The only species so far identified as causing the syndrome is Carukia barnesi, a small carybdeid box jellyfish occurring in the Cairns area (latitude, 16o44'S; longitude, 145o40'E), north Queensland.3 The bell of this tiny jellyfish is just 12 mm in diameter in mature specimens. The original description of the Irukandji syndrome is (paraphrased): the severe systemic symptoms developing 30 minutes or so after a mild skin sting from Carukia barnesi. Severe low back pain; excruciating muscle cramps in all four limbs, the abdomen and chest; sweating, anxiety, restlessness, nausea, vomiting, headache and palpitations occur.2,3

Since this original description, based on stings occurring around Cairns in north Queensland, life-threatening hypertension,3 pulmonary oedema and toxic global heart dilatation4 have been added as further complications of the syndrome. These symptoms were described after Irukandji syndrome resulted from stings occurring in the Whitsunday Islands, and later in the tropical Great Barrier Reef region.5

We describe the first recorded death from Irukandji syndrome in an overseas tourist on Hamilton Island in the Whitsunday Islands, Queensland (20o20'S, 148o56'E), in January 2002. This case was followed by another death of a 44-year-old tourist from the US in April 2002 from Irukandji syndrome on the outer Great Barrier Reef, off Port Douglas, about 1300 kilometres north of the first fatality.6 Both deaths occurred from intracerebral haemorrhage after severe hypertension caused by envenomation by a jellyfish.

On 30 January 2002, at about 1115 hours, a 58-year-old tourist from the UK was stung on the face and chest soon after entering shallow water at a beach on Hamilton Island. He did not see the creature, but said to his wife "something has got me", and they left the water. Over about 20 minutes he became distressed, with generalised muscular cramping pains, sweating, anxiety and nausea. He presented to the resort doctor, who noted he had hypertension (260/160 mmHg) and tachycardia (pulse, 142 beats per minute) and he was given 100 mg pethidine, 15 mg morphine, 10 mg metoclopramide, 25 mg promethazine and 5 mg diazepam, all intramuscularly, at 1150 hours. At 1200 hours his condition suddenly deteriorated and he became unresponsive, with stertorous breathing. A provisional diagnosis of cerebrovascular accident (CVA) was made. His past medical history included an aortic valve replacement in 1995 for aortic stenosis (he was taking 8 mg warfarin daily, and had had an international normalised ratio [INR] of 5.0 a week earlier). Intravenous access was obtained, an airway inserted with oxygen supplementation, electrocardiographic monitoring begun, and urgent transfer to a mainland hospital requested.

A doctor and nurse flight team arrived at 1400 hours to find the patient unconscious with fixed dilated pupils and a blood pressure of 180/64 mmHg. The patient was sweating, salivating profusely, had a mild epistaxis, stertorous breathing and erythematous flushing of the face, neck and anterior chest. He was given 2.5 mg midazolam and 100 mg suxamethonium intravenously, and intubated; sedation was maintained with midazolam, morphine and vecuronium, and he was given 1 mg aliquots of phentolamine in an attempt to control his blood pressure, although this remained between 210/134 mmHg and 170/110 mmHg during the flight.

He arrived at Mackay Base Hospital at 1620 hours. No attempt was made to sample nematocysts, as no sting site was clearly delineated, although skin flushing and intermittent diaphoresis (of the face and upper body; noted in helicopter, but not specified in notes) were noted and remained throughout the night. A chest radiograph showed cardiomegaly and unfolding of the aorta. Initial electrocardiography showed atrial fibrillation and right bundle branch block. 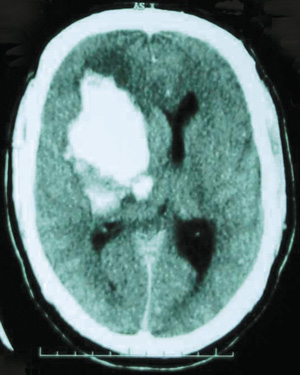 Computed tomography of the brain showed an 8 × 5 × 7 cm haemorrhage centred on the basal ganglia, 1 cm midline shift and right lateral ventricle effacement with subarachnoid extension filling the third and fourth ventricles, a small haemorrhage in the cerebral peduncles and the left caudate nucleus, with blood surrounding the brainstem at the foramen magnum (Box). The haemorrhage was not considered surgically salvageable by the neurosurgeon.

The patient's pupils remained fixed and dilated, and brain death was confirmed at 1710 hours on 31 January. A postmortem examination was not performed.

Stings causing the delayed effects of the Irukandji syndrome are well known in the Whitsunday area, with almost every patient developing hypertension and a rise in cardiac troponin levels,7 as seen in our patient. Some develop delayed toxic cardiac dilatation and heart failure; a few develop painful neurasthenic burning pain in both lower limbs or in the jaw, priapism or acute angioneurotic oedema within minutes of the initial sting, often accompanied by an audible wheeze.7 Stings from the outer Great Barrier Reef in the Cairns region have also caused severe hypertension and heart failure.5 The second death from intracranial haemorrhage after jellyfish envenomation occurred in this northern reef area and was attributed to hypertension of an Irukandji syndrome.6

Hypertension can be life-threatening, with the highest readings being some 280/180 mmHg.7 Our patient's high INR probably placed him at much higher risk of a cerebrovascular accident. Similar deaths may have occurred in the past, with the relationship to Irukandji syndrome not being recognised.

There is currently no first aid treatment for carybdeid jellyfish stings, although immediate vinegar dousing is advised to prevent further envenomation from inactivated stinging cells present on the skin.7,8

Blood pressure must be monitored after envenomation and hypertension treated with 5 mg phentolamine given intravenously (although in this case the aliquots were smaller because high ambient temperature and humidity with profuse sweating caused clinical dehydration).

Most cases of envenomation by jellyfish causing Irukandji syndrome occur some distance from medical care, with helicopter or medical response often too late to treat the early pain and hypertension. As intravenous nitrates are effective in reducing hypertension, sublingual nitroglycerine spray may help control blood pressure until skilled medical aid is available.

Research on venom from Carukia barnesi caught in the Cairns region shows it acts as a presynaptic neuronal sodium channel agonist, strongly stimulating noradrenalin release, and causing many clinical features of the Irukandji syndrome.9 Venom studies on carybdeid jellyfish are urgently needed to develop preventive strategies and effective treatments for Irukandji syndrome, including an antivenom.

We thank Dr M Lewin and Dr Shiranth de Silva for providing clinical information about the patient, and Dr Simone Harrison for help in preparing this article. Research to date on Irukandji has been funded by Australian Rotary Health Foundation, Lions International, CRC Reef Research and the Thyne-Reid Education Trust No.1.