Ben Haneman's army of friends were greatly shocked to learn that Ben had collapsed in the State Library of New South Wales, was admitted to St Vincent's Hospital, and died the following day, 18 December 2001, without regaining consciousness. His life of service has enriched us all. 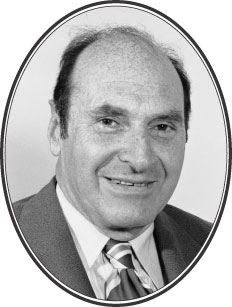 Ben was born into a Jewish family in Florence, Italy, on 13 February 1923. They migrated to Australia in 1927, where Ben thrived. He attended Canterbury Boys' High School, then entered the University of Sydney's Faculty of Medicine at the age of 15. After graduating in 1944 and completing residencies in Perth, he settled into general practice in Carlton, NSW, in 1947. He became a Member (1960) and Fellow (1971) of the Royal Australasian College of Physicians.

Officially, Ben served St George Hospital (as Honorary Medical Officer and then Visiting Medical Officer) from 1947 until 1990, particularly in the field of gastroenterology. His effective service was much longer. He loved teaching, and would take students to Lidcombe Hospital on Sunday mornings to see rare and interesting neurological cases. Naturally, he became St George's first Warden of Students. For many years he contributed a monthly essay to the St George Hospital Post Graduate Medical Bulletin. He was also a regular contributor to RACP News, Australian Doctor and the Jewish press. He became a physician of extraordinary energy, enthusiasm, erudition, generosity, compassion and good humour.

Ben had an enormous range of interests. He was a committed Jew and was chairman of the Social Justice Committee of the Jewish Board of Deputies. He had a valuable personal library containing many thousands of volumes, and a highlight of a visit to his home was to share his enjoyment of some recent "find". For over 30 years he was a greatly respected member of the Library Committee of the Royal Australasian College of Physicians.

He also had a passion for Spain and its culture. Having learnt Spanish in his youth, he became enamoured of the country and its people. He was an honorary professor for many years at the University of Navarre, and in 1984 the Spanish government appointed him a Knight of the Order of Civil Merit. In 1997, he generously donated to the State Library of NSW 1100 editions of Don Quixote in various languages and a further 1000 books on Cervantes. He became the first Life Member of its Library Society, the Friends' Group, in November 2001.

A passionate soul, Ben was truly quixotic himself ("one who strives with lofty enthusiasm for visionary ideals" — Oxford English Dictionary). Generations of students and patients are indebted to him.

In 1988, Ben was appointed a Member of the Order of Australia for services to medicine and the Spanish community.

He is survived by his sons David and Peter.