Objectives: To examine whether pre‐hospital emergency medical service care differs for women and men subsequently admitted to hospital with stroke.

Conclusion: Our large population‐based study identified sex differences in pre‐hospital management by emergency medical services of women and men admitted to hospital with stroke. Paramedics should receive training that improves the recognition of stroke symptoms in women.

The known: Stroke‐related disability is greater for women than men, and their subsequent quality of life poorer. Investigations of sex differences in pre‐hospital emergency medical service care for people with stroke have yielded inconsistent results.

The implications: Refining the assessment of symptoms in women in pre‐hospital emergency services care could improve patient outcomes.

Landmark trials of intravenous thrombolysis1 and endovascular thrombectomy2 have transformed acute stroke care in recent years. As the efficacy of these treatments is highly time‐dependent, rapid pre‐hospital assessment is critical for optimising outcomes, and emergency medical services play a major role in realising their potential benefits.

Differences in pre‐hospital activation of emergency medical services for men and women with stroke have been examined in several studies (Supporting Information, table 1). Some investigators found no sex differences,3 others that women were more likely to be transported to hospital by ambulance,4 or that the mean time between symptom onset and presenting to hospital was longer for women than men.5 However, most studies were not population‐based and sample sizes were small. As many investigations were not designed to detect sex differences in pre‐hospital activation of emergency medical services, they did not consider important confounding factors, such as age.3,4,5

It is recognised that atypical clinical manifestations of stroke on initial presentation are more frequent in women.6 Further, a large United States study found that the proportion of missed stroke diagnoses was nearly seven times as large for patients aged 18–44 years presenting to emergency departments (4.0%) as for those aged 75 years or more (0.6%).7

In our population‐based study, we examined the pre‐hospital care and management provided by emergency medical services to people admitted to hospital in New South Wales with stroke diagnoses. We investigated whether pre‐hospital emergency medical services care was different for women and men, and whether any sex differences were influenced by age.

We analysed linked administrative data for women and men admitted to NSW hospitals during 1 July 2005 – 31 December 2018 with a principal diagnosis and one additional diagnosis code for stroke at separation (International Classification of Diseases, tenth revision, Australian modification [ICD‐10‐AM] codes I60–68, G45) and no previous admissions with a stroke diagnosis in any diagnosis field after 31 July 2001 (ie, lookback period of four years).

NSW Ambulance data collections contain operational information from the computer‐aided dispatch system and information documented by paramedics in the patient health care record (PHCR) or electronic medical record (eMR). The PHCR database comprises electronic transcripts of paramedics’ paper case sheets, while eMR data are directly derived from electronic case sheets entered into the eMR system from devices in the ambulance. The eMR has been the preferred format since its staged introduction in 2010, but the PHCR is still used for some care episodes.

According to the NSW Ambulance stroke care protocol, all patients with FAST warning signs (facial drooping, arm weakness, speech difficulties) should be transported to the highest level stroke care facility available within 90 minutes. During transport, paramedics regularly repeat and document physical examinations and physiological observations to identify trends, clinical deterioration, and response to treatment. Associated conditions (eg, hypo‐ or hyperglycaemia, altered level of consciousness) are treated as required. For people who meet hyperacute stroke treatment (eg, thrombolysis) criteria, paramedics complete a stroke process sheet, proceed to the hospital without delay, and notify the receiving hospital via the control centre. The minor variations to the protocol during 2005–2018 are summarised in Supporting Information, table 2.

We summarise patients’ demographic characteristics at hospitalisation as descriptive statistics, by sex. We summarise the assessments, applied protocols, and treatments during ambulance transport as descriptive statistics, by sex. We compared values for men and women as adjusted mean differences, or as adjusted odds ratios (aORs) with 95% confidence intervals (CIs) estimated in logistic regression models adjusted for age, marital status, country of birth, Indigenous status, hospital region, year of stroke onset, and stroke subtype. We also undertook a priori subgroup analyses by age group (under 70 years, 70 years or older), including an age*sex interaction term. Statistical analyses were conducted in SAS 9.4.

This study was approved by the research ethics committees of NSW Population and Health Services (HREC/18/CIPHS/56), the Aboriginal Health and Medical Research Council of NSW (1503/19), and the Australian Institute of Health and Welfare (EO2018/2/431).

Characteristics of patients who arrived by ambulance

Assessments of patients by ambulance paramedics

Our large population‐based study, an analysis of data for people admitted to NSW hospitals with stroke during 2005–2018, examined sex differences in their management by emergency medical (ambulance) services. We found that women were more likely than men to arrive at hospital by ambulance, but less likely to receive stroke care management prior to hospital admission. Among patients under 70 years of age, women were less likely than men to be assessed by paramedics as having a stroke, but there was no significant difference for older patients.

About half of all patients admitted to hospital with stroke were transported by ambulance, and the proportion was larger for women (52.4% v 47.9%). Previous studies (Supporting Information, table 1) have found that the proportion of cases in which emergency medical services were activated for people with stroke ranged from 17% in Brazil10 to 82% in the United Kingdom.3 Sex differences in emergency medical service care have been reported for people with many illnesses and injuries,11,12 including stroke,3,4,5 but the conclusions drawn have been inconsistent, indicating the need for large population‐based studies to identify the reasons for these differences.

Among patients under 70 years of age, women later diagnosed with stroke were less likely than men to be assessed by paramedics as having stroke. Stroke is more frequently missed in women than in men; atypical clinical manifestations are more frequent in women, and implicit bias in evaluations by health care providers is also possible.6,13 We found that women subsequently diagnosed with stroke were more frequently assessed by paramedics as having stroke mimics (eg, headache or migraine, anxiety, unconsciousness) than men, contributing to delayed recognition and treatment of stroke, consistent with the findings of other studies.14,15,16,17

We found that the stroke care protocol was less likely to be invoked during ambulance transport for women than for men. Although the absolute difference was small (women, 49.5%; men, 51.4%), in‐hospital treatment may be delayed for a considerable number of women. Further, delayed initiation of effective treatment, such as reperfusion therapy,18 could have greater consequences for women because stroke outcomes are generally poorer for women than men,19 although women derive at least equivalent benefit from appropriate treatment.20 Awareness of these differences could have both clinical and financial consequences, given the costs of death and disability, including those of long term care.21 Similar sex‐related differences have been reported for myocardial infarction,22 and emergency department doctors are less likely to identify coronary artery disease as a cause of chest pain in women or to recommend diagnostic tests.23 Women are also less likely to report that their health care providers told them they were at risk for heart disease prior to an index myocardial infarction event, despite risk factor burdens similar to those of men.24

The strength of our study was its whole‐of‐population analysis, permitting the generation of a comprehensive profile of pre‐hospital emergency medical service care for patients subsequently admitted with stroke. However, a range of stroke mimics were diagnosed by ambulance paramedics. While recognising the possible inaccuracy of specific ambulance reporting diagnoses, our intent was to present a descriptive profile and to assess differences in presentation times for people with stroke mimics. We could not link pre‐hospital care data with differences in mortality or morbidity data by sex. We could not assess symptoms presented by patients, reasons for the management chosen by paramedics, or management prior to the arrival of paramedics. Further, we had no data on potential confounders in the relationship between sex and emergency medical service management, such as risk factors for cardiovascular disease (eg, smoking, physical activity, body mass index, alcohol consumption), neurological severity at the time of the stroke, pre‐morbid dependence, and cardiovascular and cerebrovascular disease history. As information for 57% of people was documented only by PHCR, paramedic assessment, care protocol, and treatment information were missing for these patients, possibly causing selection bias.

Pre‐hospital emergency medical service care in NSW differs for women and men subsequently admitted to hospital with stroke. In particular, women are less likely to be managed with stroke‐specific protocols during ambulance transport to hospital. Paramedics should re‐consider their assessment of women during pre‐hospital emergency medical service care. Improving paramedic training in symptom recognition, particularly in women, may reduce time to treatment and improve outcomes for people with stroke.

Box 1 – Baseline characteristics by sex and arrivals by ambulance for patients admitted to New South Wales hospitals with a principal diagnosis of stroke, 2005–2018 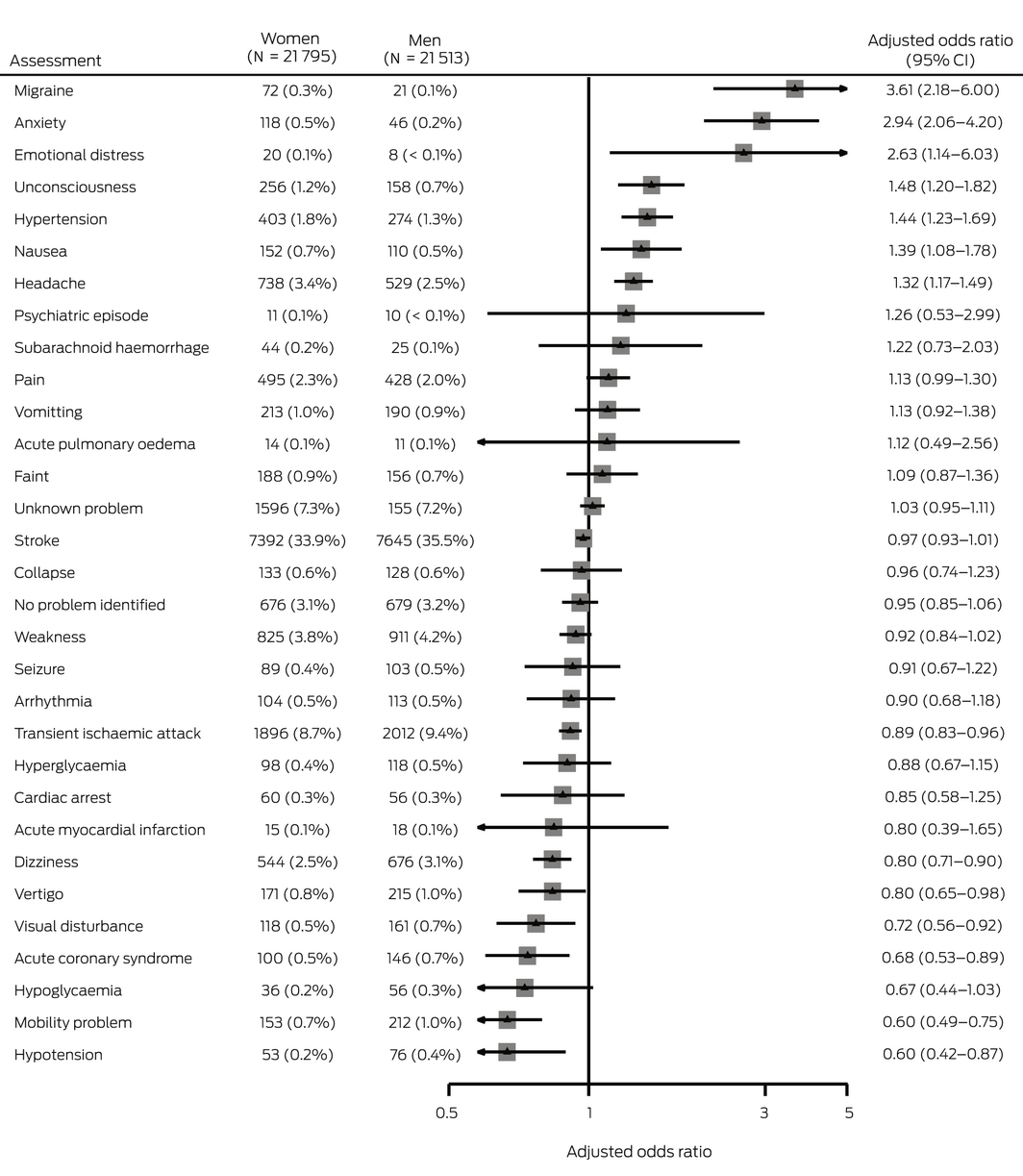 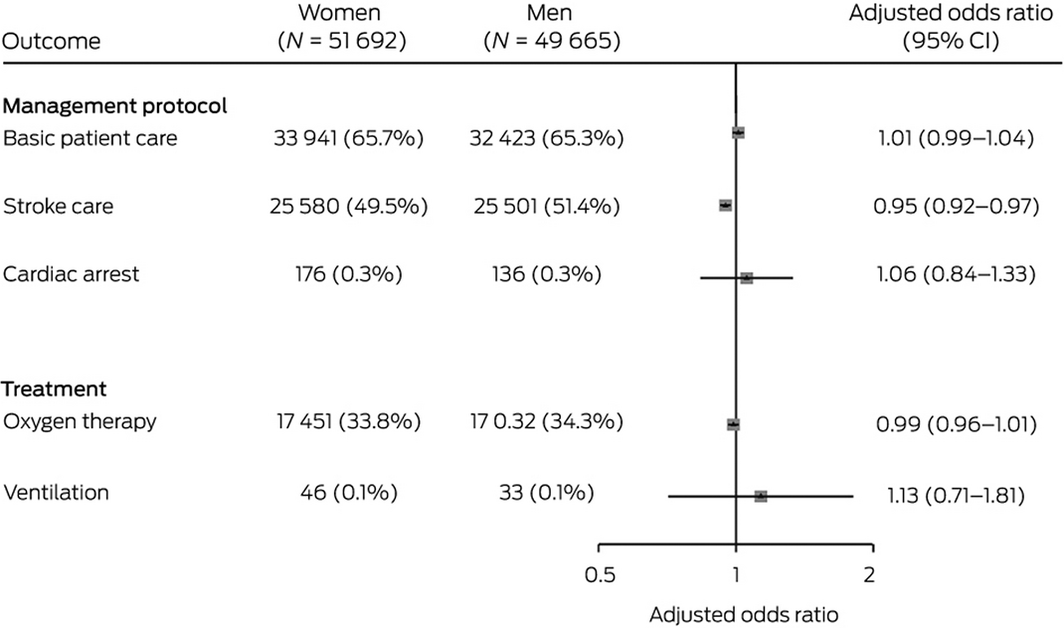