The acceptability and usability of two HIV self‐test kits among men who have sex with men: a randomised crossover trial

Objectives: To compare the usability and acceptability of oral fluid‐ and blood‐based HIV self‐test kits among men who have sex with men in Australia.

Setting, participants: Gay, bisexual, and other men aged 18 years or older who have sex with men, who attended two metropolitan sexual health clinics in Sydney and Melbourne, 7 January – 10 December 2019.

Conclusion: It is important to provide options for obtaining both oral fluid‐ and blood‐based HIV self‐tests. The usability and acceptability of both kits were high, but the ease of use and perceived accuracy influenced test kit preference.

The known: Stigmatisation, the stress of waiting for results, and costs are barriers to HIV testing that can largely be overcome by self‐testing, but restrictions on availability have limited its uptake in Australia.

The new: Both HIV self‐test kits were easy to use, but the oral fluid self‐test was reported as being easier to use, and was preferred to the blood‐based kit by 58% of participants. Despite some difficulties during self‐testing, almost all participants received valid test results.

The implications: Access to HIV self‐testing should be expanded. TGA approval of an oral fluid‐based test should be considered in order to provide greater choice.

In Australia, diagnoses of human immunodeficiency virus (HIV) infection in gay, bisexual, and other men who have sex with men are declining, primarily among those born in Australia.1 HIV testing is a key prevention strategy,2 and the gateway to both treatment for those with positive test results and to pre‐exposure prophylaxis (PrEP) for people with negative results.3 However, the frequency of HIV testing among men who have sex with men is inadequate, particularly among those who are not receiving PrEP4,5 or were born overseas.6 Consequently, late HIV diagnoses remain relatively common; during 2008–2017, 23% of Australian‐born and 37% of East Asia‐born men diagnosed with HIV had CD4+ counts below 350 cells/μL.7

Barriers to HIV testing include low perceived risk of infection, the stress of waiting for results, and fear of a positive result.8 Men born overseas who have sex with men face additional barriers, particularly those without health insurance, including the cost of HIV testing,9 poor awareness of HIV testing locations, cultural stigmatisation associated with HIV diagnoses, and fear of judgement by health care providers.10 HIV self‐testing can circumvent some of these barriers, allowing men to undergo private testing, to obtain results rapidly, and to eliminate the need to attend a healthcare facility for testing.

A randomised controlled trial (RCT) in Australia found that providing free oral fluid‐based HIV self‐test kits to men who have sex with men doubled the frequency of HIV testing, and almost quadrupled the rate for infrequent testers (those not tested for HIV during the preceding two years).11 In November 2018, the Therapeutic Goods Administration (TGA) approved a blood‐based HIV self‐test, the first for an infectious disease approved in Australia.12 However, no oral fluid HIV self‐test has yet been approved, reducing choice for Australian men. Uptake of HIV self‐testing has been limited; in surveys of the Sydney gay community during 2019 and 2020, fewer than 1% of HIV‐negative participants reported that their most recent HIV test had been a self‐test.4

For our non‐blinded, randomised crossover trial, phase 2 of the Preferences and Usability of self‐test kits for HIV among gay and bisexual men (PUSH) study,20 we recruited participants who attended two publicly funded sexual health clinics in Melbourne and Sydney during 7 January – 10 December 2019. Men aged 18 years or more were eligible if they had ever previously had sex with a man, but were excluded if they reported living with HIV, could not speak or read English, could not provide informed consent, or could not meet all study requirements. Eligible participants were provided with an information sheet, and the research nurse explained the study procedures. Those who agreed to participate provided written consent. Our study complied with the 2010 CONSORT statement extension to randomised crossover trials.21

Equal numbers of participants were randomised by an independent biostatistician to the two study arms using a computer‐generated sequence, stratified by site (maximum 200 participants from each site). Participants in one arm received the oral fluid‐based HIV self‐test first, those in the other arm the blood‐based HIV self‐test; in the second stage, each participant used the alternative self‐test. The test order for each participant was recorded in sequentially numbered sealed envelopes; each envelope was selected in order by the research nurse to maintain the pre‐generated random sequence, and was opened by the research nurse only after participant enrolment.

Participants were provided, without cost, two HIV self‐tests: an oral fluid‐based test (OraQuick Advance HIV1/2 rapid antibody test; not yet approved by the TGA) and a blood‐based test (Atomo HIV Self‐Test, Elion platform). The manufacturer of the oral fluid HIV test reports its sensitivity as 99.3% and specificity as 99.8%;22 the manufacturer of the blood HIV self‐test reports 99.6% sensitivity and 99.6% specificity.23

Participants could view manufacturers’ instructional videos for each kit on a tablet computer, and read the printed instructions included with the test kits; to reflect real‐world use, participants could choose freely whether and how to use each instruction type. Viewing the instructional video before purchasing the blood‐based kit was required in Australia during November 2018 – October 2021,24 but our study was designed before this requirement was introduced. During testing, undertaken in a private room in the clinic, participants were observed by a research nurse, but were not permitted to ask them questions about using the kits; they were instead referred to the provided instructions. All participants with reactive HIV self‐test results were offered confirmatory testing on the same day, and immediate supportive counselling by clinic staff.

Participants completed a multi‐part online questionnaire before testing (part 1: socio‐demographic characteristics, HIV and other sexually transmitted infection testing history, sexual behaviour) and after using each kit (ie, while waiting for the test result). In part 2 of the questionnaire, participants evaluated ease of use for each test step (five‐point Likert scales), generating an index (cumulative total) score ranging from 0 to 30 (six steps) for oral fluid HIV self‐testing and from 0 to 35 (seven steps) for blood HIV self‐testing. Finally, participants provided an overall rating of ease of use for each test (very difficult, somewhat difficult, slightly difficult, slightly easy, somewhat easy, very easy), and nominated the kit they preferred (Supporting Information, questionnaire).

During testing, the research nurse used a checklist to record whether participants exhibited any difficulty during each step of self‐testing. The checklist was based on manufacturer‐provided instructions for test use and a published checklist for observing HIV self‐testing.25

Statistical analyses were performed in Stata 16. All participants originally allocated to a research arm were included in our analyses. A sample size of 167 participants was adequate to detect a 20 percentage point difference (60% v 40%) in the proportion of participants reporting that a HIV self‐test was easy to use with 80% power (α = 0.05) (post hoc power sample size calculation for simple 2 × 2 crossover design; assumed paired proportions with 10% correlation of repeated observations).

For the primary outcome, we assessed differences between the proportions of participants who described self‐testing as easy by estimating odds ratios [ORs] with 95% confidence intervals [CIs] in generalised mixed models with a binomial link function that accounted for within‐subject correlation associated with the crossover design. If the carryover effect was not statistically significant, we assessed the significance of differences in proportions reporting that the test was “easy to use” (binary) in McNemar tests. We repeated our analyses separately for men at high risk (anal sex without condoms during the preceding six months and not using PrEP) and those at usual risk, and for men frequently tested for HIV (at least every three months) and infrequent testers (groups based on questionnaire responses).

For the secondary outcomes, we estimated the proportions of men who preferred one or other HIV self‐test, with 95% CIs calculated using the exact method (binomial distribution). We summarise nurses’ observations of step‐specific difficulties as descriptive statistics.

Future use of HIV self‐testing

Characteristics associated with higher odds of providing HIV self‐test kits to regular or casual partners included ease and confidence with using the kits, overseas birth; for offering a self‐test kit to a casual partner, identifying as gay and having more than six male partners in the past six months were also factors (Supporting Information, table 6).

Despite these encouraging findings, uptake of HIV self‐testing has been low in Australia,4,5 probably because of limited test choice and availability, lack of advertising, and cost.27 Only one blood‐based HIV self‐test has been approved by the TGA, and no oral fluid‐based test. As men preferred one or other test type for different reasons — ease of use for the oral fluid test, perceived accuracy for the blood test — it would be helpful if both kit types were available. Until October 2021, the blood‐based HIV self‐test could only be bought online, as the TGA required that an instructional video be viewed prior to purchase. Online access makes HIV testing more available, particularly to people living in rural and remote areas. However, access to HIV self‐test kits from a range of locations, as is the case overseas, is preferable; informed by the findings from our study, the requirement to watch the video has been lifted,28 and the blood‐based kits are now available from pharmacies in Australia. Nine of ten participants in our sample completed all steps without the video, and 98.8% received valid test results.

Most men preferred written to video instructions, indicating the need for printed instructions to be clear and to explain the steps that users found most difficult. For example, instructions should emphasise the need to set a timer and to check the kit expiry date, which could be printed more prominently. The blood‐based test kit instructions recommended checking the expiry date, and a larger proportion of its users indeed checked the date (62% v 48%). An earlier Australian study using the same blood‐based HIV self‐test kit similarly found that 45% of participants checked its expiry date.13

Participants born overseas were three times as likely to want to use self‐testing again as those born in Australia. Given the high late diagnosis rate for overseas‐born men who have sex with men, HIV self‐testing, coupled with other culturally appropriate approaches, should be a greater focus in our HIV prevention strategy. As many overseas‐born men are ineligible for subsidised health care (Medicare) and therefore subsidised HIV testing, a targeted self‐testing program should consider reducing its cost.

First, participants recruited from sexual health centres may have relatively high levels of health education and motivation, and therefore not be representative of all men who have sex with men. Second, HIV self‐test kits provided instructions in English only, for which reason we exclusively recruited participants who could speak and read English. Third, the presence of a nurse during self‐testing may have resulted in participants being more careful during the test. Further, three different nurses were involved in the study, potentially introducing measurement bias, although we mitigated the risk by ensuring the checklist items were as objective as possible.

The oral fluid‐based HIV self‐test was regarded by participants as easier to use than the blood‐based self‐test, and was preferred by a larger proportion of men, but the usability and acceptability of both kits were high. Despite the very low proportion of invalid test results, further refinements to make HIV self‐testing easier and more reliable are important.

Box 1 – The acceptability and usability of two HIV self‐testing kits among Australian men who have sex with men: a randomised crossover trial. CONSORT flow chart* 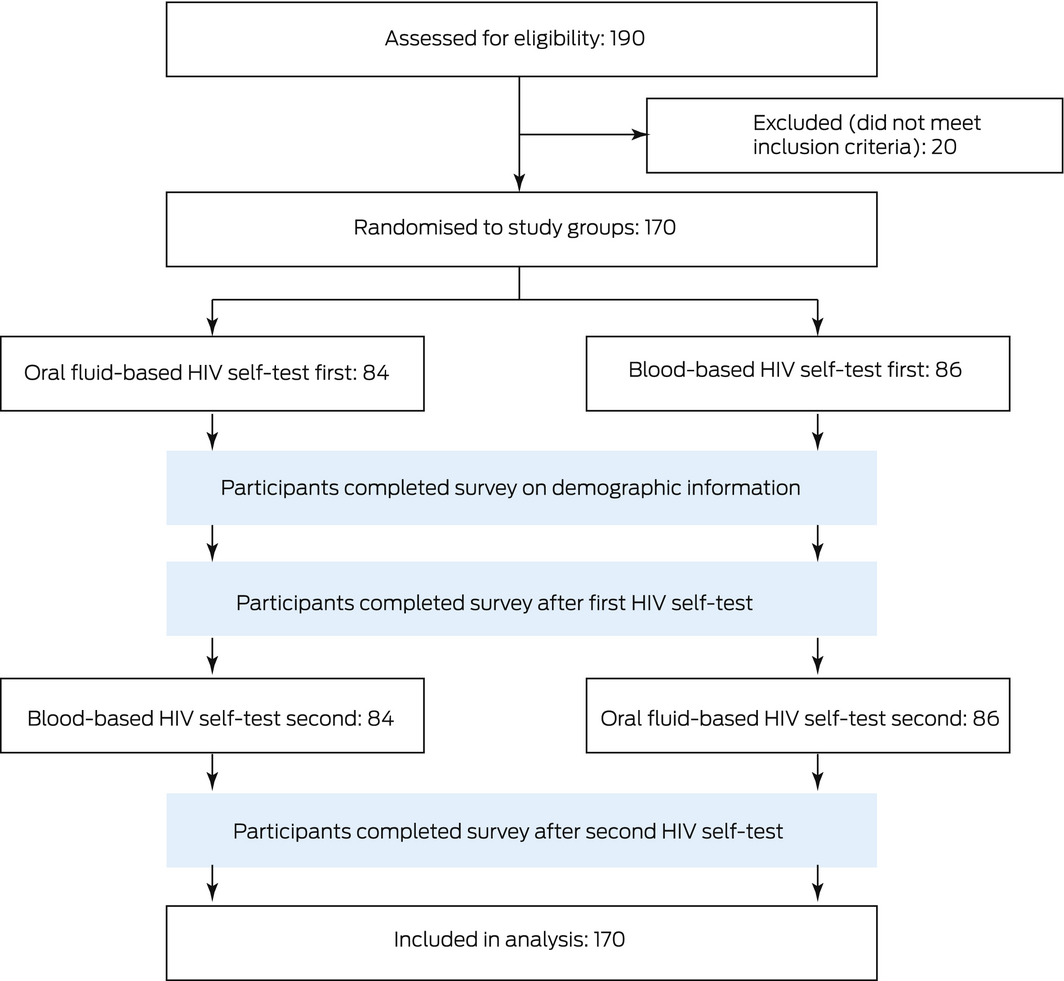 * All participants received the interventions as planned, and none were lost to follow‐up.

Box 3 – Ease of use of HIV self‐test kits by men who have sex with men: generalised mixed models with a binomial link function 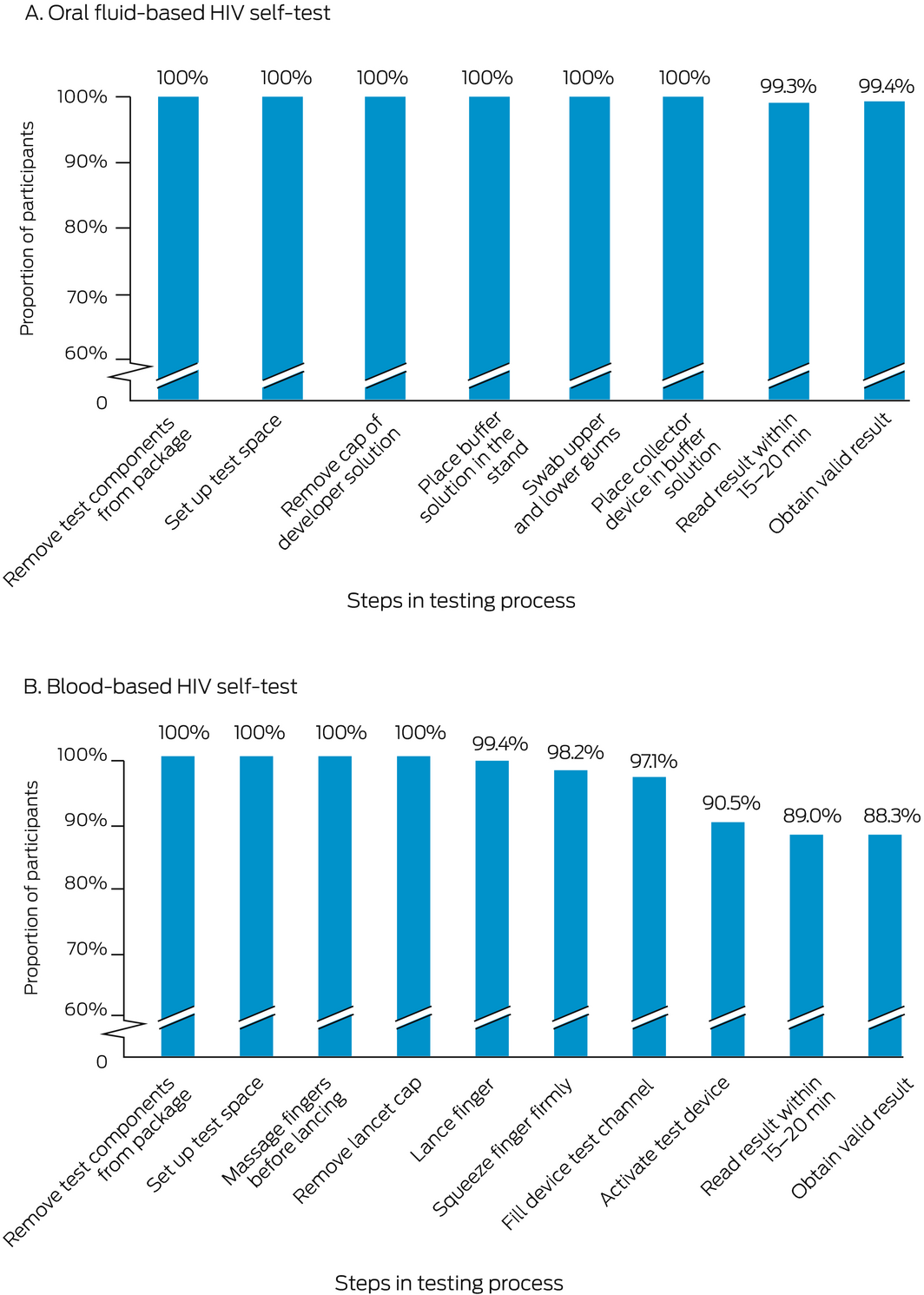 * The denominator for each step is the number of participants who attempted the step; the numerator is the number who completed the step. The underlying data for these graphs is provided in the Supporting Information, table 4.