The seroprevalence of SARS‐CoV‐2‐specific antibodies in children, Australia, November 2020 – March 2021

During 2020, 28 327 severe acute respiratory syndrome coronavirus 2 (SARS‐CoV‐2) infections were notified in Australia, of which 3838 (13.5%) were in people aged 0–19 years (data supplied by National Interoperable Notifiable Diseases Surveillance System, NINDSS) (Box 1). Most SARS‐CoV‐2 infections in children are asymptomatic or mild, and infection rates are probably higher than indicated by notifications that rely on presentations for testing. Knowledge of age‐specific seroprevalence throughout the pandemic provides insights into viral transmission and can guide policies on vaccination and school closures. Healthy children are frequently underrepresented in seroprevalence studies because they present for health care infrequently and investigators are reluctant to perform painful procedures such as venepuncture. Residual blood specimens from samples collected for other purposes are often inadequate for testing; for a Sydney SARS‐CoV‐2 serosurvey based on residual blood (in early 2020), the only age group for which the required sample size was not achieved was children aged 0–9 years.1

As community seroprevalence was unlikely to be more than 20‐fold higher than the cumulative incidence of notified cases, a sample size of 350 specimens per state and age group (0–4, 5–9, 10–19 years) would be adequate to exclude seroprevalence exceeding 2.0% with 95% confidence. Based on the results of two earlier serosurveys,1,2 we expected that seroprevalence was unlikely to exceed 0.6%. We used the total SARS‐CoV‐2 antibody ELISA (Wantai) we had previously employed in a related national serosurvey.2 Positive specimens were further characterised in immunofluorescent antibody and microneutralisation assays (each: positive titre: ≥ 10).3 We estimated seroprevalence in Bayesian analyses adjusted for test sensitivity and specificity.1 Negative results were reported by email to the parents or carers of participants; positive results, together with clinical advice, were communicated by phone.

Four of 1689 blood specimens were excluded because the children lived outside the five states included in our study. The target sample size (350 children) was achieved for each age group. The median age of participants was 6.7 years (interquartile range, 3.2–11.7 years); 1023 were boys (60.7%), 662 girls (39.3%). Ninety were Indigenous people (5.3%; age‐specific Indigenous population proportion in the 2016 Australian Bureau of Statistics estimated resident population for the five states: 5.4%4) (Box 3). Proportions of tested sera by geographic classification broadly reflected overall population distributions, except that the proportions of New South Wales and Queensland samples from metropolitan areas were larger than the corresponding population proportions; distribution by socio‐economic status (by residence postcode) also matched the population distribution ().

We found the prevalence of SARS‐CoV‐2 antibodies in children and adolescents at the beginning of 2021 to be very low, similar to the findings of Australian serosurveys that predominantly sampled adults.1,2 Our opportunistic, consent‐based method of blood sampling was highly effective in achieving the required sample size for analysis and could be used for future sero‐epidemiological monitoring of SARS‐CoV‐2 in children, especially after the surge in infections from mid‐2021. 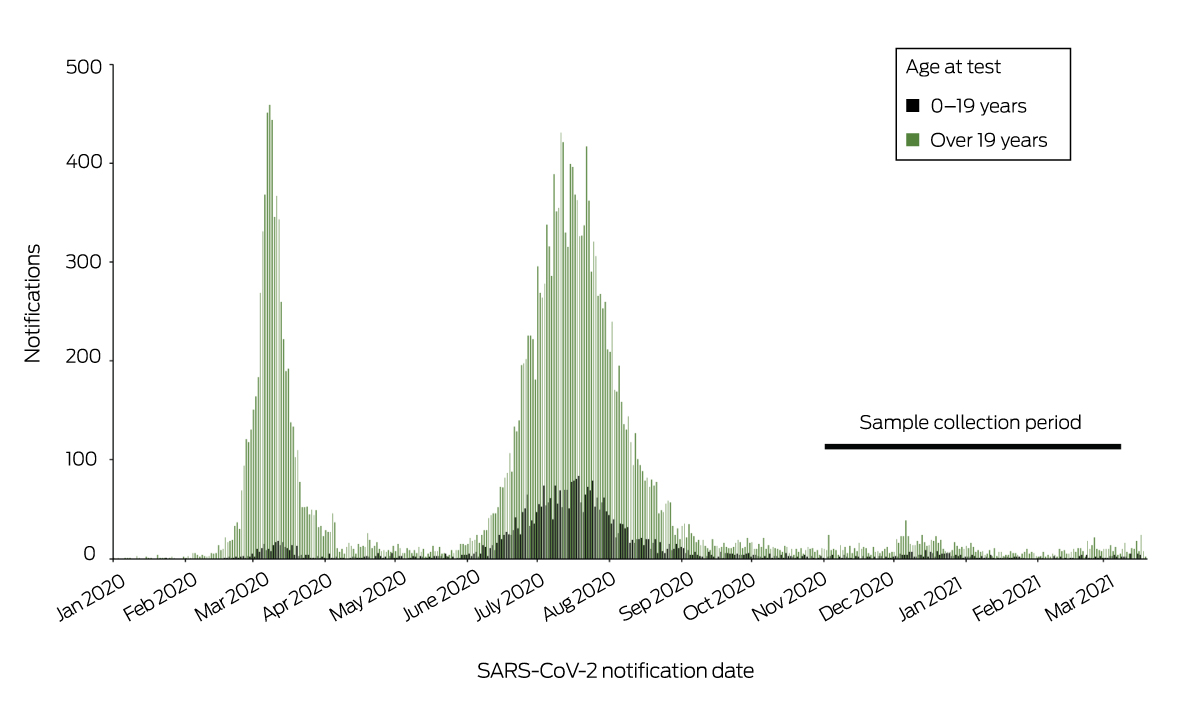