Hospital‐acquired complications: the relative importance of hospital‐ and patient‐related factors

Objective: To quantify the prevalence of hospital‐acquired complications; to determine the relative influence of patient‐ and hospital‐related factors on complication rates.

Conclusions: Hospital‐acquired complications were recorded for 9.7% of hospital episodes, but patient‐related factors played a greater role in determining their prevalence than the treating hospital.

The known: Hospital‐acquired complications are frequent events, and variation in rates between hospitals is often interpreted as indicating differences in quality of health care, despite the complex interactions between hospital‐ and patient‐related factors.

The new: During 2015–2018, hospital‐acquired complications were reported for 9.7% of major hospital episodes in South Australia and Victoria. Patient characteristics on admission were the major determinant, explaining 55% of overall variance in rates, compared with 5% for hospital characteristics.

The implications: Hospital‐acquired complication rates reflect casemix and patient characteristics more than hospital factors and quality of care. Clinical validation of our findings and revision of our interpretation of complications are warranted.

To improve “safety and quality in the provision of health care services”,1 the Australian Commission on Safety and Quality in Health Care (ACSQHC), in collaboration with Australian health policy institutes,2,3 developed their hospital‐acquired complication classification system, now endorsed by all Australian health departments. The ACSQHC system focuses on 41 serious adverse clinical events grouped into 16 classes “for which clinical risk mitigation strategies may reduce the risk of that complication occurring”.4 Health services are encouraged to evaluate hospital‐acquired complications, identify gaps in health care, and implement risk mitigation measures.4

Complications related to patient or hospital factors have similar consequences for morbidity, hospital stay, and costs5 (Box 1), but distinguishing between the two types is essential for clinical interpretation and risk mitigation.

The influence of patient factors (age, diagnosis, comorbidity) and hospital factors (site, type, standard of care) on hospital‐acquired complication rates has not been examined in Australia. We therefore analysed administrative data from two Australian states (South Australia, Victoria) to quantify the prevalence and to determine the influence of these factors on hospital‐acquired complication rates.

Hospital factors recorded for each complication included treating site, type of hospital (tertiary referral, major metropolitan, major regional), which differ in their referral patterns, clinical services, and resources;13 and state, which differ in governance, funding, and population. We also undertook a subgroup analysis of episodes that included treatment in an intensive care unit (ICU).

We included data for multiple‐day acute care episodes for adults (18 years or older) in all major public hospitals, defined as those with on‐site ICUs. We excluded day‐care procedures, non‐acute (palliative, rehabilitative) care, and hospital episodes for which the length of stay exceeded 200 days. The dataset precluded three classes of hospital‐acquired complications from being included in the primary analysis: 5. unplanned ICU admission (not defined in the national algorithm), 15. perineal tear during delivery (fifteen hospitals did not have obstetric services), and 16. neonatal birth trauma (age exclusion).

Analyses were performed in Stata/MP 16.1. Group data are summarised as means with standard deviations (SDs) or medians with interquartile ranges (IQRs). Event rates (with 95% confidence intervals, CIs) were calculated from episode numbers and length of stay data. Between‐group differences are reported as standardised mean differences (SMDs); inter‐hospital variation in rates was quantified as the coefficient of variation (CV).

The influence of patient and hospital factors on hospital complication rates was estimated in two stages. First, explanatory models were fitted to data for each complication class (binary dependent outcome) with probit regression estimators, and covariates selected from patient factors recorded on admission (demographic characteristics, diagnoses, comorbid conditions), with errors adjusted for clustering within hospitals. Calendar year was included as a fixed covariate to adjust for temporal changes in reporting. The final explanatory model was selected on the basis of the Akaike (AIC) and Bayesian information criteria (BIC),14 estimated with the Stata fitstat command.15 Propensity scores for the predicted risk (at the time of admission) of a subsequent hospital‐acquired complication were estimated for each episode.

Second, a four‐level random intercept (probit) regression model was fitted to data for each complication class using the Stata meprobit command, with patients (propensity scores) nested in hospitals nested in peer groups as random intercepts. The form of the estimator was:

This model estimates variance (reported as the intra‐class correlation coefficient,16 ICC) at the patient, hospital, and peer group levels, and thereby the influence of each level on the likelihood of complications. The maximum ICC value of 1.0 indicates substantial influence, an ICC of zero indicates no influence on the likelihood of complications. To test the sensitivity of ICC to identify clinically significant hospital variance, we also estimated the ICC for class 15 (perineal tear during delivery) for the 23 hospitals with and the 15 hospitals without obstetric services. ICC values are probability estimates and not additive.

We selected a low clinical significance limit for SMDs, CVs, and ICCs (0.20) to reduce the risk of type II errors (missing clinically important variation). As the admission diagnosis is itself subject to clinician error, increasing the likelihood of later complications, sensitivity analyses of hospital variance were undertaken in which we excluded admission diagnoses and all patient factors.

The Eastern Health Human Research Ethics Committee (LNR2020‐199585) approved the study. The South Australian Ministry of Health and the Victorian Agency for Health Information provided the datasets, and each approved publication of this article. Hospital identity was removed prior to analysis, and the requirement for patient consent was waived.

In our analysis of 1.6 million multiple‐day adult acute care episodes over 10 million bed‐days in 38 major hospitals in South Australia and Victoria, we found that hospital‐acquired complications were recorded for 9.7% of hospital episodes; hospital rates ranged from 3.2 to 16.5 events per 100 episodes. Complications were more frequently reported in tertiary referral hospitals than other hospital types, and the rate was greater for episodes including ICU care (37.1 v 7.3 events per 100 episodes). Variation in complication rates per bed‐day (exposure) were similar.

Complication rates declined for nine of 13 complication classes during 2015–2018. Whether the incidence of complications actually dropped or the declines reflected changes in the documentation and coding of events warrants further investigation. The absence of major rate fluctuations suggests that coding was consistent, despite the ICD‐10‐AM being revised in 2017.

Patient‐related factors influenced the risk of hospital‐acquired complications, but the degree of influence differed by complication class (Supporting Information, table 2). The median age of patients who experienced complications was higher than for those who did not, larger proportions were frail or had other clinical conditions, their median hospital stay was longer, and in‐hospital mortality was greater for these patients (Box 4).

The importance of patient‐related factors for hospital complication rates has been reported in Australia,3,17 New Zealand,18 the United Kingdom,19 the Netherlands,20 Canada,21 and the United States.22 Our finding that hospital factors had little influence on complication rates was, however, unexpected.1,2,3,4,8 For all complication classes, variation in rates between hospitals and hospital types (Supporting Information, table 4) was chiefly determined by patient‐related factors at the time of hospital admission rather than by hospital factors (Box 5).

Similar findings23,24 have received little attention, despite their clinical implications. First, the influence of patient‐related factors should be further examined in a multi‐centre clinical audit of reported hospital‐acquired complications.20,25 We support the ACSQHC focus on patient safety and encourage all health services to evaluate local complications data25 and to develop effective mitigation strategies.

Second, the distinction between antecedent patient and hospital factors is neither a semantic exercise nor a convenient excuse for health services and clinicians. Failure to differentiate between the two groups of factors may lead to practice changes that are clinically sound but ineffective in reducing complication rates. Increasing the funding of health care, improved clinical guidelines, and training and education may reduce rates of complications attributable to hospital factors and health care errors, but are unlikely to reduce those linked with patient‐related factors. These require different solutions, including improved patient selection and risk assessment (using, for example, the Grattan Institute hospital complications calculator: https://grattan.shinyapps.io/all‐complications‐should‐count), more informed discussion of treatment risks and patient consent, and the investigation of therapeutic alternatives with lower risks and fewer side effects.

Third, we recommend that clinicians be engaged in developing clinical indicators, including access to the source data and methodology. Expert interpretation of metadata, selection of appropriate statistical methods, and clinical validation are crucial elements if ineffective or costly approaches are to be avoided.3

Fourth, that hospital complication rates are too high is recognised, but it is widely assumed that they are inversely related to the quality of care provided by hospitals.1,2,3,4,23,24,26 Clinical20,25,27 and epidemiological evidence23,24 suggests that rates are not necessarily lower in better performing health services. Complications are often anticipated and surveillance instituted, and most are identified and remedied, as required by national standards;28 all are coded as post‐admission diagnoses. Higher rates are therefore expected in better performing health services and in those caring for patients with more complex needs.

Several caveats must, however, be considered. While the definition of “hospital‐acquired complication” is agnostic2,3,4 and possibly insensitive to health care errors, it does not exclude them.23,25 Higher complication rates may reflect more complex casemix and high performance, or health care errors and poor performance. Consequently, we should not abandon our national hospital‐acquired complications model. The ACSQHC algorithm12 furnishes a clinical tool for screening, monitoring, and research, while clinical practice guidelines3 establish minimum clinical standards.

We have previously reported that complications are under‐reported,25 but we did not draw on source documents for this analysis. The dataset excluded patients under 18 years of age and admissions to hospitals without ICUs. We did not explore length of stay as an endogenous covariate,29 which may have increased the numbers of complications in our analyses. An ICC derived from a small number of groups (fewer than six) may underestimate effect size.16 Our findings may not be generalisable to other health services, or to periods of high demand or limited hospital resources. 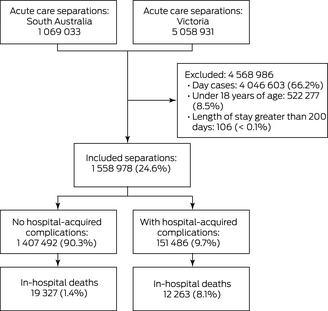 * [Correction added on 6 January 2022 after first online publication: Box 2 image has been replaced.]

Box 3 – Numbers and rates (with 95% confidence intervals) of hospital‐acquired complication events during 1 558 978 public hospital episodes in 38 major hospitals in South Australia and Victoria, 2015–2018 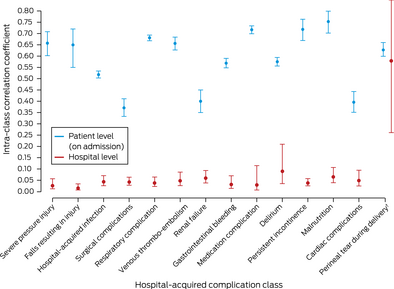 We are grateful to Terri Jackson (Melbourne Institute of Applied Social and Economic Research, University of Melbourne) for her comments and advice, to all health information managers who undertook the coding of patient records, and to the health departments in South Australia and Victoria and the Victorian Agency for Health Information for granting access to the data we analysed.