Objective: To evaluate the characteristics and predictors of unplanned readmission within 30 days of hospitalisation for the treatment of peripheral arterial disease (PAD) in Australia and New Zealand.

Design: Analysis of hospitalisations data in the Admitted Patient Collection for each Australian state and territory and the New Zealand National Minimum Dataset (Hospital Events).

Setting: All public and 80% of private hospitals in Australia and New Zealand.

Participants: Adults (18 years or older) hospitalised with a primary or conditional secondary diagnosis of PAD during 1 January 2010 ‒ 31 December 2015.

Main outcome measure: Rate of unplanned readmission (any cause) within 30 days of hospitalisation with PAD.

Conclusion: Unplanned readmissions within 30 days of hospitalisation for PAD are often for potentially preventable reasons. Their number should be reduced to improve clinical outcomes for people with PAD.

The known: Clinical outcomes for people hospitalised with peripheral arterial disease (PAD) are often poor and patients may require early unplanned readmission. Their frequency and the reasons for these readmissions are relatively unexplored.

The new: About one in ten PAD‐related hospitalisations in Australia and New Zealand were followed within 30 days of discharge by unplanned readmissions. The likelihood of readmission was influenced by several patient and hospitalisation factors, including potentially preventable procedural complications, cardiovascular events, and infections.

The implications: Reducing the unplanned readmission rate is important, both to minimise healthcare costs and to improve clinical outcomes for people with PAD.

More than 200 million people around the world have peripheral arterial disease (PAD), including more than 12% of people over 60 years of age.1,2 Early symptoms include limb pain during movement (claudication), and progression of atherosclerosis can lead to chronic limb‐threatening ischaemia — manifested as rest pain, ischaemia with ulceration, gangrene, and infection — that often necessitates limb amputation.3,4 People with PAD typically have poor clinical outcomes, including substantial loss of mobility1,5 and elevated risks of stroke, myocardial infarction, and death.3,4,6 In particular, the 10‐year risks of major coronary events and death (cardiovascular and all‐cause) are twice as high for people with PAD.3,4,6

Patients hospitalised with PAD are at high risk of post‐discharge complications, but few population studies have examined the frequency or causes of associated hospital readmissions.7 Unplanned readmission rates after vascular surgery are among the highest for any surgery type.8 Arterial occlusions often require endovascular or surgical revascularisation, and the risks of complications are high.9,10 In a recent American study, about one in six people hospitalised with PAD were readmitted within 30 days of discharge; procedural complications, sepsis, and diabetes were the most frequent primary readmission diagnoses.9

We analysed hospitalisations data in the Admitted Patient Collection for each Australian state and territory and the New Zealand National Minimum Dataset (Hospital Events). These datasets include data collected by all public and most private hospitals (80%) for a standard set of variables, including hospitalisation type (elective, acute), admission and discharge dates, primary and secondary diagnoses, procedures, and patient status at discharge. In both countries, diagnoses and procedures are coded according to the International Classification of Diseases, tenth revision, Australian modification (ICD‐10‐AM) and the Australian Classification of Health Interventions (ACHI).13 An audit of discharge medical records found that accuracy of ICD‐10 coding in Australia exceeded 85%.14

We summarised data for continuous variables as means with standard deviations (SDs) or medians with interquartile ranges (IQRs), and categorical variables as counts and proportions. We assessed the statistical significance of differences between patient group characteristics in χ2, t, and Wilcoxon rank‐sum tests. We identified predictors of unplanned readmission using logistic regression. Candidate variables included age, sex, hospital status (private or public), acute PAD hospitalisation, region, presentation with chronic limb‐threatening ischaemia, PAD‐related interventions (endovascular or surgical revascularisation, or hybrid procedure), and comorbid conditions. Comorbid conditions were grouped according to the hierarchical condition category model;17 we combined the ICD‐10‐AM diagnosis codes for selected secondary diagnoses during the PAD hospitalisation and the primary and secondary diagnoses for all hospitalisations during the preceding 12 months into 180 clinically meaningful categories. Variables in the final multivariable model were selected by backward stepwise regression (P < 0.05). Goodness of model fit was quantified with the concordance statistic (C‐statistic). Odds ratios (ORs) with 95% confidence intervals (CIs) were calculated for each variable. Statistical analyses were conducted in Stata SE 13.

The median hospital length of stay was longer for acute than elective PAD hospitalisations, and the proportions involving patients with most comorbid conditions (including chronic limb‐threatening ischaemia and heart failure) larger, both for hospitalisations followed by unplanned readmissions and those that were not (Box 1).

Previously reported 30‐day readmission rates of 11.7–21.3% referred to patients with PAD who had undergone arterial revascularisation or had chronic limb‐threatening ischaemia.9,18,19,20 In contrast, we report the unplanned 30‐day readmission rate for all patients hospitalised with PAD, regardless of disease severity and medical intervention. Population studies of predictors of readmission after hospitalisation with PAD outside Canada and the United States have not been reported. Procedural complications after PAD revascularisation are the most frequent causes of early unplanned readmission in the United States, followed by sepsis, gangrene, and complications of diabetes.9 A 2018 Canadian study found that congestive heart failure, obstructive pulmonary disease, and diabetes mellitus were associated with early readmission and death after elective bypass surgery for PAD.20 Our finding that hospitalisations for the treatment of PAD in Australia and New Zealand are often followed by readmissions linked with procedural complications, infections, and cardiovascular events complement these North American reports.

Many readmission diagnoses in our study were of potentially avoidable conditions. Type 2 diabetes was the primary diagnosis for 10.8% of readmissions, reflecting the large proportion of people with PAD who have diabetes and the adverse clinical outcomes associated with poor glycaemic control.22 The primary diagnosis was “complications of procedures, not elsewhere classified” for 9.9% of readmissions and “complications of cardiac and vascular prosthetic devices, implants and grafts” for 4.2%. The incidence of these complications could be reduced by improving post‐operative care;9 for instance, routine early follow‐up of discharged patients reduces the incidence of procedural complications in people treated for heart failure.23 Infections such as cellulitis, pneumonia, and sepsis were also frequent readmission diagnoses, and targeted interventions could avert these potentially avoidable conditions.24 For a large proportion of readmissions the major diagnoses were heart failure, acute myocardial infarction, angina, or stroke, reflecting the risk of cardiovascular events associated with PAD. Aggressive primary and secondary prevention of cardiovascular disease could improve outcomes for patients with PAD.

A broad range of patient and hospitalisation factors were associated with the risk of early unplanned readmission, several of which could be modified by lifestyle changes and improved health care. Surgical intervention during the PAD hospitalisation and chronic limb‐threatening ischaemia were associated with increased risk of rehospitalisation, possibly reflecting high rates of infection, cardiovascular events, and need for debridement in patients who are urgently hospitalised.3 Early multidisciplinary follow‐up for patients with chronic limb‐threatening ischaemia is needed to reduce the risks of unplanned readmission and poor clinical outcomes.25 In contrast, endovascular revascularisation was associated with a lower readmission rate, suggesting fewer short term complications.26 Cardiac conditions were associated with higher readmission risk, indicating that patients with PAD with cardiovascular disease require more intensive care during and after hospitalisation. Care at a private hospital was associated with lower readmission risk; differences in quality of care in public and private hospitals should be investigated. Finally, improving discharge and hospital‐to‐homecare transition practices, supported by general practice liaison officers, has been reported to reduce readmission and emergency department visit rates by 30%, and accompanied by substantial cost savings.27

Administrative data are less specific than data collected for research purposes, but were the only national data available for assessing our research question. Further, administrative data do not capture certain patient factors that may influence readmission rates, such as pharmacotherapy and socio‐economic status. We did not account for the competing risk of out‐of‐hospital death, and may therefore have underestimated readmission risk. Clinical outcomes for people with PAD are influenced by patient factors, clinician experience, institutional care practices, and policy; further analyses are needed to fully assess the influence of these factors on clinical outcomes and the effectiveness of interventions for improving care. 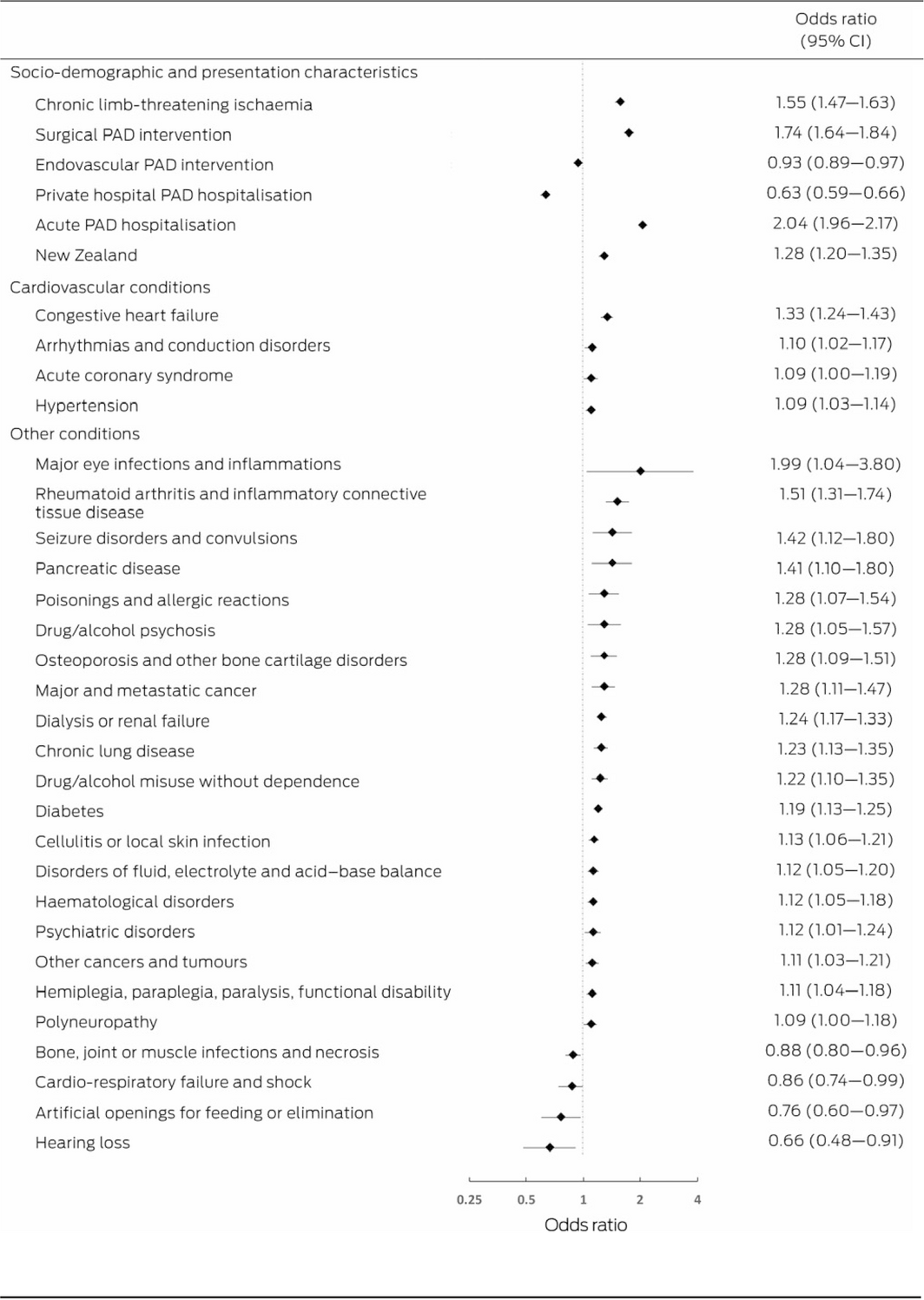