Objectives: To describe the burden, geographic distribution, and outcomes of firearm‐related violence in New South Wales during 2002–2016.

Conclusions: Rates of self‐harm with firearms are higher for older people, men, and residents in outer regional and rural/remote areas, while those for assault‐related injuries are higher for younger people, men, and residents of major cities. Strategies for reducing injuries caused by self‐harm and assault with firearms should focus on people at particular risk.

The known: Firearm‐related violence — self‐harm, assaults, accidents, family violence —causes both injury and death, but has not been extensively studied in Australia.

The implications: Strategies focused on people at particular risk of self‐harm and assault with firearms could reduce the associated injury and death rates in Australia.

An estimated 251 000 people died from firearm‐related injuries in 2016.1 Gun violence is frequently viewed through the lens of the American experience, with mass killings that attract international attention. In 2018, more than 14 000 firearm homicides were recorded in the United States.2

The Australian experience of preventing firearm‐related deaths is quite different from that of the US, and has influenced gun control debates around the world. In April 1996, 35 people were killed in Port Arthur, Tasmania, by a gunman using military‐style semi‐automatic rifles. Within 12 days, the Australian government and all state and territory governments agreed to a new national gun law standard and to initiate a mandatory buyback of newly prohibited firearms. Within a year, 659 940 semi‐automatic rifles and shotguns had been purchased and destroyed.3 Between 1996 and 2015, at least one million privately owned firearms — one‐third of the estimated national total — were seized or surrendered, and decommissioned.4

An even larger number of people are injured but not killed by firearms, causing pain, disability, psychological distress, and substantial medical and rehabilitation costs.6,7 Most studies of gun‐related violence have focused on deaths, disregarding non‐fatal injuries and the related use of health care. Assessing these elements are critical to understanding the overall impact of gun‐related violence.

Analyses of the immediate health care use and outcomes of firearm‐related injuries have generally been based on emergency department presentations or hospital admissions at single sites. Most studies were undertaken in the United Kingdom or the United States and were based on data sources that did not differentiate between admissions and presentations per person, so that double counting was possible.8,9,10,11,12

In this study, we investigated the burden, geographic distribution, and outcomes of firearm‐related violence in New South Wales during 2002–2016. We used multiple data sources, including data on hospitalisations, mental health care admissions, and other health encounters.

We conducted a population‐based record linkage cohort study of people injured by firearms in New South Wales during 1 January 2002 – 31 December 2016. Our data sources were the NSW Admitted Patient Data Collection, death registrations from the NSW Register of Births Deaths and Marriages, and the NSW Mental Health Ambulatory Data Collection (further details: online Supporting Information).13 Firearms licence data were derived from the 2019 annual report of the NSW Police Force Firearms Registry, which includes information on firearms licensing and ownership, including numbers of firearm licence holders by postcode.14

We classified firearm‐related injuries by intent as assault, intentional self‐harm, accidental, or undetermined or “other” (legal intervention or military operations) according to ICD‐10‐AM codes. We identified the number of people admitted to hospital, the body regions injured and type of firearm used (according to ICD‐10‐AM codes), and admission characteristics (length of stay, intensive care admission) in records for hospital admissions at the time of their injuries. We also determined the numbers and proportions of people who were admitted to hospital or had contact with mental health ambulatory services, the numbers of admissions, and the proportions of people with recorded mental health or behavioural conditions (ICD‐10‐AM codes F00–F99) during the two years preceding and the two years following the injury (from date of index firearm injury admission).

We report the frequencies, proportions, and rates of firearm injuries by intent category and by socio‐demographic characteristics (age, sex, postcode‐based remoteness15 and socio‐economic status [Index of Relative Socio‐economic Disadvantage16]). When more than one firearm‐related injury was recorded, we included the first injury if the intent category was the same for all injuries; injuries with different intent were each included in the relevant intent categories. Rates of injury were defined as the mean annual number of injured persons divided by the relevant estimated population at the midpoint of the study period, using the Australian Bureau of Statistics TableBuilder function (www.abs.gov.au/websitedbs/censushome.nsf/home/tablebuilder). We calculated the mean annual percentage change in firearm injury rate using annual population denominators in negative binomial regression analyses. We also calculated the numbers and proportions of people who died as a result of their injuries and the types of firearm (smaller or larger firearms) used.

We determined the proportion and rate of licence holders by geographic area from the number of firearm licence holders with registered firearms (by postcode) in the NSW Police Firearm Registry report. Numbers of firearm holders, and of intentional self‐harm and assault injuries, were then aggregated by statistical areas level 4 (SA4s),17 and population rates estimated. The statistical association between rates of firearm ownership and injuries in each of these two intent categories was assessed with the Pearson correlation coefficient. Analyses were conducted in SAS 9.4.

Of the 1249 people alive two years after their injuries, 490 had been hospitalised again (39.4%; mean number of admissions, 2.2; standard deviation, 2.8 admissions), including 132 with mental or behavioural disorder diagnoses (10.6%); 241 had had contact with ambulatory mental health services (19.4%). The proportions of people admitted to hospital who had mental health diagnoses (23% of admitted patients) or had received outpatient care for mental health conditions (60%) were highest for people whose firearm‐related injury had been classified as intentional self‐harm (Box 6).

In 2019, the NSW Firearms registry recorded 239 963 firearm licence holders and 886 560 registered firearms (excluding collectors); there were 12.6 licence holders with at least one registered firearm per 1000 people in metropolitan areas, 54.4 per 1000 in inner regional areas, and 90.1 per 1000 people in outer regional/rural/remote areas. SA4 rates of intentional self‐harm injuries caused by firearms were strongly correlated with those of licensed gun owners (r = 0.94; P < 0.001), but rates of firearm‐related assault injuries were not (P = 0.23) (Box 7).

We report one of the first studies to analyse linked administrative data to investigate gun‐related injuries as well as deaths in NSW, home to one‐third of the Australian population. There were 2390 people who sustained firearm‐related injuries during 2002–2016, fewer than half of whom died of their injuries. Rates of injuries varied by geographic area, age, sex, and the intent leading to injury. Rates of firearm‐related self‐harm injury and death were highest for older people, men, and residents of outer regional/rural/remote areas, while assault injury rates were highest in major cities, for men, and for people aged 19–30 years. Rates of self‐harm injury were steady during 2002–2016, while those for injuries caused by assaults and accidental events declined. Use of health care, particularly mental health‐related care, was not infrequent before and after firearm injuries, particularly for people who used firearms for self‐harm. Finally, firearm ownership rates by geographic area were correlated with local rates of intentional firearm‐related self‐harm injuries.

Our findings are consistent with reports from Ontario (Canada)18 that rates of self‐harm injuries using firearms were higher for older men in rural areas while those of assault injuries were higher for young urban men. Our findings are also consistent with reports that higher levels of gun ownership and access are associated with higher suicide rates.19,20 An analysis of Queensland data for 1997–2004, one of the few Australian studies on this topic, found that the rate of suicide using a firearm was about eleven times as high for people with current firearm licences than for those who had never possessed licences.21

We found that almost nine in ten intentional firearm‐related self‐harm injuries were fatal. It is estimated that 65 000 people attempt suicide in Australia each year.22 Few studies have examined firearm‐related risk factors for suicide, and recent data on rates and outcomes for people who survive attempted suicide using a firearm have not been published.21,23 Identifying risk factors, including periods of increased risk, is essential for directed interventions for reducing the number of suicide deaths.

We also found that the injured person was a female for one in ten firearm assaults. Domestic and family violence is a major health and welfare problem in Australia, and the risk of domestic partner violence escalating to homicide is 11 times as high in households with access to firearms.24 However, we had no information on the relationships between people with injuries from assaults and the firearm user, so our study provides no insights into domestic and family violence.

Rates of injury and death caused by assaults with firearms declined during 2002–2016. Despite reports that the number of guns in NSW had risen to almost one million by early 2019,25 the gun homicide rate in Australia is low (2019: 0.15 per 100 000 population)26 compared with that of the United States (2018: 4.4 per 100 000).2 A more comprehensive Australian national profile of firearm‐related violence, its relationship with socio‐demographic factors, its costs, and its impacts would help researchers and policymakers develop and test interventions and policies for reducing firearm‐related violence. Similar research in the United States has been translated into significant policy reform and changes in practice, including allowing family members to request removal of firearms from people at risk of self‐harm, and has helped adoption of suicide awareness as a basic tenet of firearm safety.27

The population data sources we included in our linkage study to ascertain the numbers of firearm‐related injuries included all hospitalisations and deaths in NSW. However, we relied on firearm injury being recorded as the diagnosis in medical records, and being subsequently coded as such by medical coders. Further, some people with firearm‐related injuries may live in NSW but have travelled interstate for hospital care. A data linkage study of cross‐border hospital use in Australia estimated that 3% of hospitalised patients travelled interstate for their admissions (in NSW, particularly those living in the far north or west of the state).28 Finally, we did not include non‐fatal injuries treated outside hospital, such as minor injuries that could be managed in primary care. All these factors may have depressed our estimates of injury rates.

Our preliminary investigation provides novel information about the extent and characteristics of firearm‐related injuries in NSW. While we can draw on the international literature to apprise us of the risks for and impacts of gun violence, the unique Australian legislative framework regulating gun ownership makes analyses of local data important for ensuring that nationally relevant findings inform discussions of gun policy in Australia. 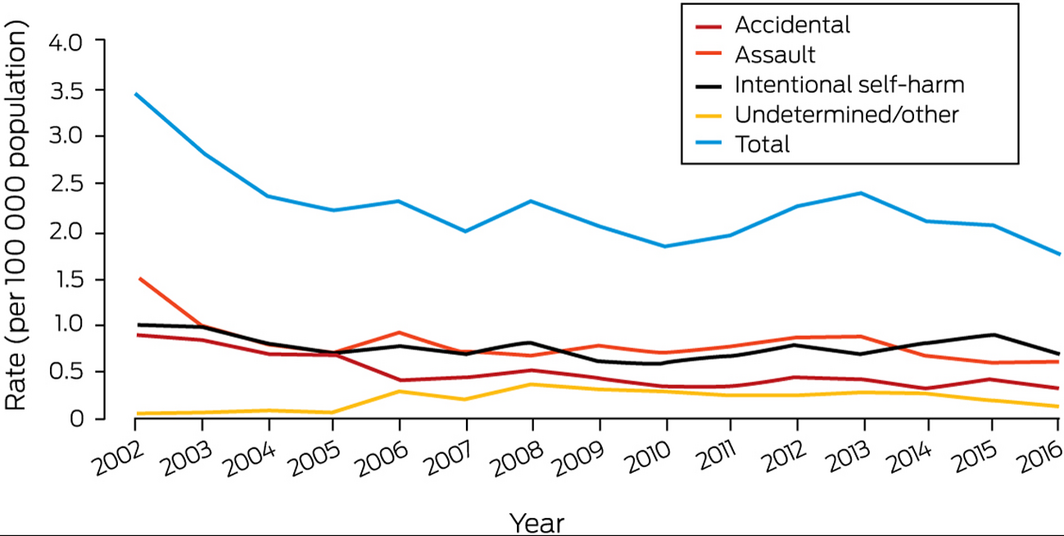 Box 6 – Health service use during the two years preceding and the two years following a firearm‐related injury, New South Wales, 2002–2016, by intent category