Main outcome measures: Age‐standardised rates of MS‐2 Step prescriptions dispensed by year for 2015–2019, and age‐standardised rates by state, remoteness area, and level 3 statistical areas (SA3s) for 2019. Numbers and proportions of SA3s in which MS‐2 Step was not prescribed by a GP or dispensed by a community pharmacy during 2019 (unweighted and weighted by number of women of reproductive age), by state and remoteness area.

Conclusions: The rate of early medical abortion is greater among women in remote, outer regional, and inner regional Australia than in major cities, but a considerable proportion of women live in areas in which MS‐2 Step was not locally prescribed or dispensed during 2019. Supporting GPs in the delivery of early medical abortion services locally should be a focus of health policy.

The new: We found that rates of early medical abortion are highest outside metropolitan centres, but about 30% of women live in areas in which it had not been prescribed by a local general practitioner during 2019.

The implications: General practitioners should be supported to enable them to provide early medical abortion services.

Abortion, both surgical and medical, is an essential healthcare service. Early medical abortion — using mifepristone and misoprostol to terminate a pregnancy — has been endorsed as safe and effective during early pregnancy by Australian and overseas peak medical bodies.1 In Australia, early medical abortion can be provided by telehealth or in person in primary care.2

Although the Therapeutic Goods Administration (TGA) approved mifepristone for use as a medical abortifacient during early pregnancy in 20121 and MS‐2 Step (composite regimen of mifepristone and misoprostol) has been subsidised by the Pharmaceutical Benefits Scheme since 2015,1 integration of early medical abortion into primary health care has been slow.4 In December 2020, only 2841 of 29 017 registered GPs were active prescribers of MS‐2 Step, and 5347 of 32 393 registered pharmacists were active dispensers.5

Several system, provider and patient factors have limited the integration of early medical abortion into general practice. Legislative differences have contributed to variations between Australian states and territories in its availability.1 Some GPs believe early medical abortion is not within their area of responsibility,4 while others lack training and awareness of how to provide it.6,7 Further, those who do provide the service can feel stigmatised and isolated, and speak of the need for peer support and supportive referral pathways.4,8 Fear of criminal prosecution for performing abortion and of potential complications have also been noted as barriers to GPs providing early medical abortion.4 Finally, many women are unaware that it is available or of the 63 days’ gestation eligibility limit; other barriers include needing to travel, take time off work, and to find childcare to access early medical abortion services, and many require financial support to pay for it.9

Access to abortion services can be difficult for women in rural and regional areas. Women in rural areas are 1.4 times as likely to experience an unintended pregnancy than women living in metropolitan areas, with contributory factors including geographic isolation, limited access to contraception services, and not knowing where these services are available.10 The cost is also a major barrier to access to early medical abortion, with a median out‐of‐pocket cost of $560.9

We analysed aggregated data for all Pharmaceutical Benefits Scheme (PBS) claims for MS‐2 Step dispensing. The PBS is a federal government‐funded program that subsidises listed medicines dispensed by community pharmacies and private hospitals for all Australian citizens, permanent residents, and eligible foreign visitors (from countries with reciprocal healthcare agreements with Australia) medicines.11 In addition, the PBS subsidises medicines dispensed to public hospital outpatients and non‐admitted patients, as well as for inpatients on their discharge from hospital (in most, but not all, states after public hospital pharmaceutical reforms).11

Services Australia provided the number of MS‐2 Step prescriptions (PBS item 10211K) dispensed to women aged 15–54 years resident in each Australian Bureau of Statistics (ABS) level 3 statistical area (SA3) during the calendar years 2015–2019, irrespective of prescriber type or location, aggregated by ten‐year age group and year. MS‐2 Step is listed on the PBS for terminating intra‐uterine pregnancies of up to 63 days’ gestation. Services Australia also supplied the numbers by SA3 of MS‐2 Step prescriptions written by GPs and dispensed by pharmacists. Population data for each SA3 were derived from ABS data.12 SA3s provide a regional breakdown of Australia into areas that usually include populations of between 30 000 and 130 000 people. In urban centres, they are often closely aligned with local government areas; outside urban centres, they include areas recognised as sharing a distinct identity and socio‐economic characteristics.13

We calculated age‐standardised rates of MS‐2 Step dispensing to women of reproductive age in each SA3 for each year by applying the ABS 2001 standard population.14 We defined the magnitude of variation in dispensing for a given year as the ratio of the highest and lowest age‐standardised rates by SA3; we also calculated variation after excluding the 10% of SA3s with the lowest and the 10% with the highest age‐standardised rates. For these calculations, we excluded SA3s in which fewer than twenty prescriptions had been dispensed, those that included fewer than 1000 women of reproductive age, and SA3s in which any ten‐year age group (for women aged 15–54 years) included fewer than thirty women.

In the dataset provided by Services Australia, counts were suppressed if one to six prescriptions had been dispensed for a combination of SA3, age group, and year. In our analysis, we replaced the suppressed counts with a value of five prescriptions.

In a separate analysis, we included data from all SA3s to calculate age‐standardised rates for the 2019 calendar year by state and ABS remoteness area.15 We also calculated the numbers and proportions of SA3s in which MS‐2 Step had not been prescribed by a GP or dispensed by a community pharmacy during 2019, both unweighted and weighted by the number of women aged 15–54 years resident in the SA3. As population data by SA3 were not available for 2019, we used population data for 2018.12

Formal ethics approval was not required for our analysis of de‐identified Services Australia data.

We found that rates of early medical abortion are higher among women in outer regional, remote, and inner regional Australia than in major cities; however, MS‐2 Step had not been prescribed by GPs or dispensed by community pharmacists in a large proportion of SA3s in these geographic areas during 2019. Women may have travelled long distances to access early medical abortion, or received it using telehealth services. The reduction in the range of dispensing rates by SA3 between 2015 and 2019 suggests, however, that equitable provision of early medical abortion improved during this period.

Higher rates of early medical abortion in rural and remote areas could be explained by several factors. Women in these areas may have difficulty accessing surgical abortion, as many public hospitals do not provide it at all or only in cases of fetal abnormality,16 and private clinics providing surgical abortion are predominantly located in major cities.2 Further, many women choose telehealth early medical abortion services for a range of geographic, financial, and social reasons.17 During the study period, telehealth was available across Australia (except in South Australia) from private providers.17 Early medical abortion delivered by telehealth is highly acceptable and convenient for women because they can remain at home and manage their personal responsibilities, and because it satisfies their privacy needs.17,18 Concerns about privacy and confidentiality, and perceived stigmatisation by health professionals, may diminish the acceptability of obtaining early medical abortion from local providers.19

Restrictive laws have also limited access to early medical abortion in Australia, especially in rural and remote areas.2 Abortion was decriminalised in the Northern Territory in 2017, in Queensland in 2018, and in New South Wales in 2019.22 South Australia decriminalised abortion in 2021, permitting service delivery in primary care settings.22 Inconsistencies in knowledge of the law pertaining to abortion also discourage GPs from providing the service.2

We used the lack of MS‐2 Step prescribing by GPs in an SA3 as a surrogate marker of GPs not providing early medical abortion. However, that GPs had not prescribed and pharmacists had not dispensed MS‐2 Step in some rural and remote SA3s could have a number of explanations. Firstly, rural and regional doctors may have concerns about support services, including after‐hours emergency and surgical care in case of complications, and about access to ultrasound services (recommended for gestation dating and to exclude ectopic pregnancy8,23). They might also have been concerned about their capacity to provide anti‐D, but recently updated guidelines no longer recommend the routine use of RhD immunoglobulin in medical terminations before ten weeks’ gestation.1 Early medical abortion can proceed without ultrasound assessment after careful screening for risk factors for ectopic pregnancy and when the gestational age can be accurately estimated on the basis of the woman’s history.24 Secondly, many doctors conscientiously object to performing abortions, and some refuse to refer patients for such procedures, despite a legal obligation to do so.25 Thirdly, many GPs do not have the training or knowledge required to confidently provide early medical abortion.25 Finally, women may choose not to use local GP providers for abortion services.

These barriers to providing early medical abortion are compounded by the shortage of GPs in rural and remote areas.26 While financial incentives are frequently used to recruit and retain GPs in rural and remote areas, recent research suggests they play only a limited role in improving access to primary care.26 Other strategies are therefore required. Options include increasing the use of collaborative task‐sharing arrangements and models in which nurses undertake most of the counselling, administration and follow‐up tasks of healthcare provision.8 While clinical trials have found nurse‐led models to be safe and effective,27 only medical practitioners are authorised to prescribe MS‐2 Step in Australia. An alternative approach has been facilitated by improved access to telehealth services. The introduction of MBS telehealth item numbers as part of the federal response to the coronavirus disease 2019 (COVID‐19) pandemic has meant that telehealth early medical abortion services are now covered by Medicare for eligible patients.28 One services provider reported a 30% increase in the number of early medical abortions provided via telehealth, an 8% increase in the number of regional clients, and a 20% increase in the number of remote clients during 2020.5

In the dataset provided by Services Australia, counts were suppressed if one to six prescriptions had been dispensed for a combination of SA3, age group, and year; our replacing suppressed counts with a standard value (five) probably reduced the estimated variability in dispensing rates across SA3s. Allocation of dispensed scripts to SA3s was based on the location of the provider GP recorded by Services Australia; this may have been inaccurate if a GP practised in multiple locations.

Our analysis of aggregated PBS MS‐2 Step dispensing data indicated that early medical abortion rates are higher in outer regional, remote, and inner regional Australia than in major cities, but it had not been prescribed by GPs or dispensed by local pharmacists in many SA3s in these geographic regions during 2019. State and federal governments have a duty of care to ensure that essential health services, including early medical abortion and abortion services in general, are available, affordable, and accessible to all Australian women, in public hospitals and in primary care. Local provision of early medical abortion services by GPs should be supported, and delivery via telehealth should be included in Medicare. 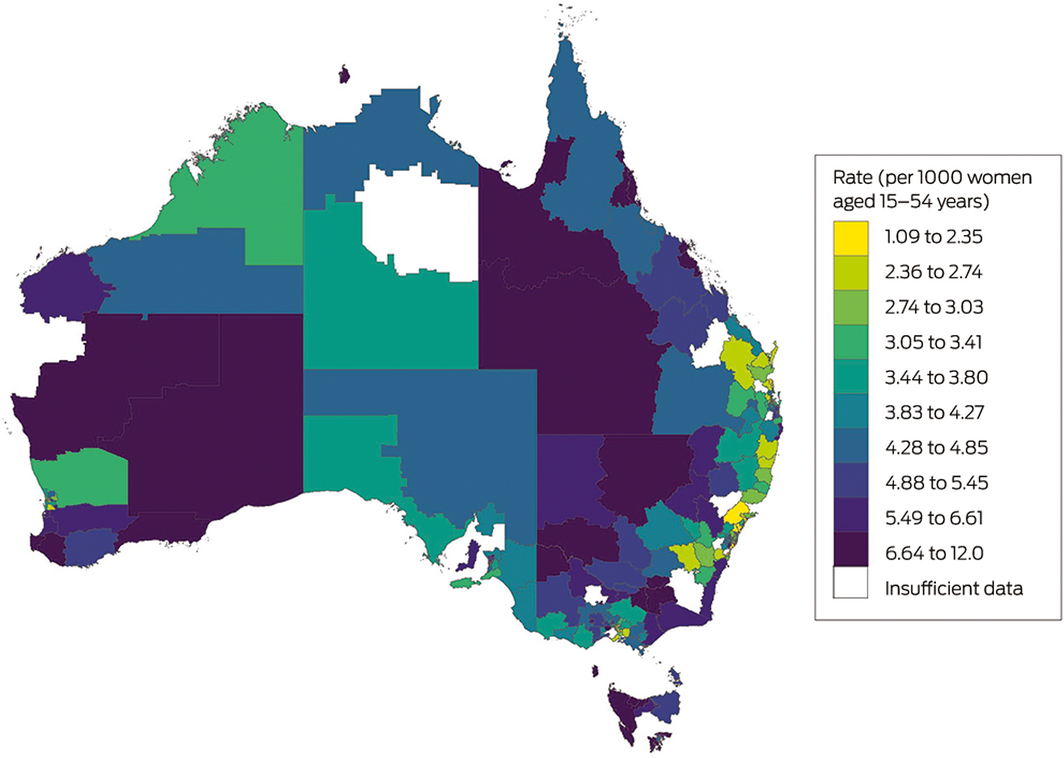 Box 4 – Level 3 statistical areas (SA3s) in which MS‐2 Step had not been prescribed by a general practitioner during 2019, by state and remoteness area

Box 5 – Level 3 statistical areas (SA3s) in which MS‐2 Step had not been dispensed by a community pharmacist during 2019, by state and remoteness area 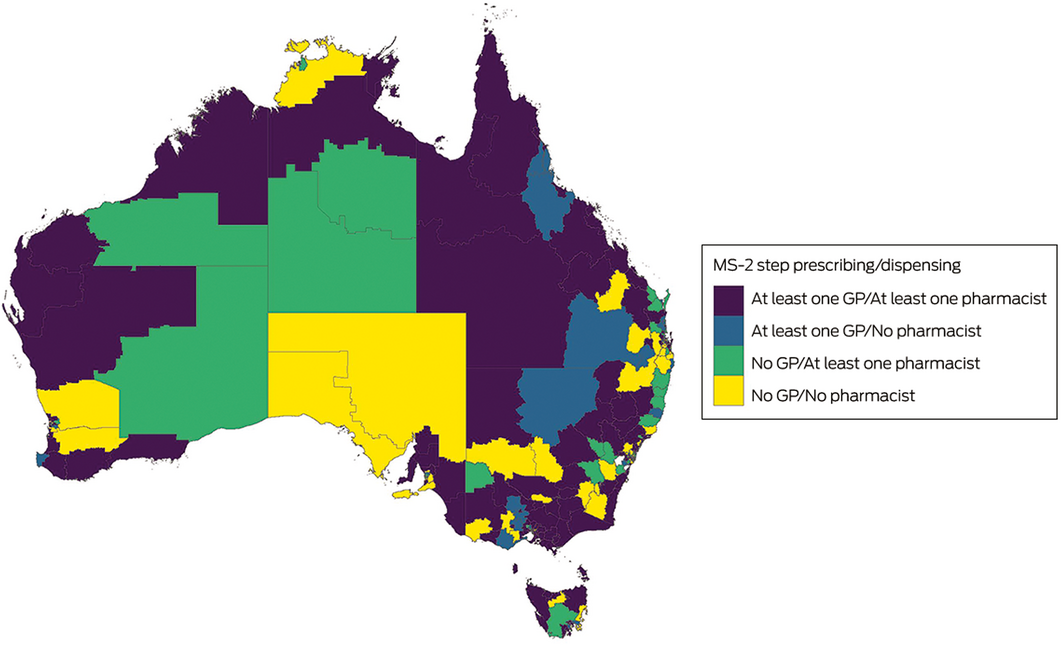