In September 2020, a Sydney public health unit was notified of the admission to a tertiary paediatric hospital intensive care unit of a 15‐year‐old girl with suspected e‐cigarette or vaping product use‐associated lung injury (EVALI), a pulmonary syndrome first reported in the United States.1 The girl had presented to another Sydney hospital with a 4‐day history of dysuria, urinary frequency and back pain followed by 2 days of vomiting and rigors. She was initially treated for urosepsis with intravenous antibiotics. She reported vaping nicotine two to three times weekly for the previous 7 months. She was febrile at 38°C, with a heart rate of 120–140 beats per minute, blood pressure of 110/80 mmHg, respiratory rate of 20 breaths per minute, and oxygen saturation of 92–95% on room air. A chest x‐ray showed bilateral pulmonary infiltrates that were worse in the lower zones (Box 1). Within hours, she became hypoxic, with oxygen saturation of 87% on room air. Abdominal computed tomography showed no abdominal pathology, but there were extensive pulmonary infiltrates in the lung bases with bilateral effusions (Box 1). Her urine drug screen result on the day of admission was positive for cannabinoids and benzodiazepines.

She was transferred to the tertiary paediatric facility where her temperature was 39.2°C, heart rate was 131 beats per minute, respiratory rate was 52 breaths per minute, and she was speaking in short sentences. Her antibiotics were changed to intravenous ceftriaxone, clindamycin and azithromycin for presumed community‐acquired pneumonia. She was commenced on methylprednisolone 1 mg/kg twice daily for 48 hours and then 1 mg/kg daily for 2 days. Non‐invasive ventilation was continued for 74 hours. A bilateral pleural tap was performed and 400 mL fluid was aspirated. She had an extensive microbiological and vasculitis screen that showed negative results (Box 2). The patient was discharged after a 7‐day admission.

Her drug history subsequently revealed that she had vaped 300 puffs from a pre‐filled nicotine vaping device (5% nicotine concentration; 20‐pack equivalent) every 3 weeks for about 7 months. She had also used tetrahydrocannabinoids (THC) via a water pipe in the previous 4 months. She last used THC more than a week before presentation to hospital but had never used THC via a vape device. She admitted to also smoking cigarettes for the past 7 months. Occasionally, she also took diazepam, alprazolam, methylphenidate and lisdexamfetamine, which were not her medications.

In summary, our patient had a similar presentation to other reported EVALI cases and fulfilled the Centers for Disease Control and Prevention case definition of EVALI as she used e‐cigarettes within 90 days of her symptom onset, had bilateral pulmonary infiltrates on chest x‐ray and computed tomography, and there was absence of pulmonary infection.1,2

The patient handed over to environmental health officers a flavoured vape device that she had used just before becoming ill. The device was submitted to the NSW Forensic and Analytical Science Service, which found that the vape fluid contained glycerol, nicotine, flavouring agents ethyl‐maltol and menthol. THC or vitamin E acetate was not detected.

In the US, where vaping nicotine and/or THC is legal in some states, 2807 cases of EVALI were diagnosed, with 68 attributed deaths, between September 2019 and February 2020.3 During the 2017–2018 period, e‐cigarette users increased from 11.7% to 20.8% among US high school students.1 From 2016 to 2019, lifetime reported use of e‐cigarettes among young Australians increased for 14–17‐year‐olds (from 9.2% to 9.6%), and in particular for those aged 18–24 years (from 19.2% to 26.0%) and 25–29 years (from 14.8% to 20.0%).4 EVALI is a diagnosis of exclusion that depends on careful history taking to identify a history of vaping either nicotine or other products such as THC, with exclusion of alternative causes, especially infective respiratory illness.2 Patients often present with cough, dyspnoea, constitutional and gastrointestinal symptoms, and non‐specific radiological lung injury.1

It has been found that a commonly used thickening agent for THC‐containing e‐liquid vitamin E acetate and THC‐containing vaping products has been strongly associated with the outbreak of EVALI.5 However, 15% of patients with EVALI reported using only nicotine‐containing products.5 The mechanism of injury is not clearly identified.5 The diagnostic value of analysing fluid from bronchoalveolar lavage for nicotine flavouring agents or vitamin E acetate (THC thickening agent) is supportive but not definitive. Bronchoalveolar lavage was not performed in our patient and vitamin E acetate was not found in her pleural fluid.

There are published guidelines for the management of EVALI.6 Apart from ventilatory support to maintain oxygenation, corticosteroids have been used with success in patients with severe disease, but more rigorous studies are needed to clarify their indications. Antibiotic cover for community‐acquired pneumonia should be used until bacterial test results become available. The local Poisons Information Centre (13 11 26) and the local public health unit should be notified of all suspected EVALI.7

Our patient reported purchasing vape devices from a local convenience store. The Public Health (Tobacco) Act 2008 (NSW) prohibits the sale of vape devices or e‐cigarettes to anyone under the age of 18 years. Under the Poisons and Therapeutic Goods Regulation 2008 (NSW), it is prohibited to supply liquid nicotine, a Schedule 7 substance, without authority. No tobacco or vape retailer in NSW has authority to supply liquid nicotine in any type of device. The maximum penalty for an individual selling a vape device to a minor is $11 000 and the maximum penalty for supplying a Schedule 7 substance without authority is $1100. From October 2021, consumers with a prescription from an Australian registered medical practitioner may legally import nicotine e‐cigarettes and liquid nicotine;8 however, tobacco and vape retailers will still be prohibited from selling these devices without authority.

Box 1 – Chest x‐ray (A) and base of lung computed tomography (B) on first day of hospital admission, showing increased insterstitial opacities bilaterally, with areas of airspace opacities in the lower zones 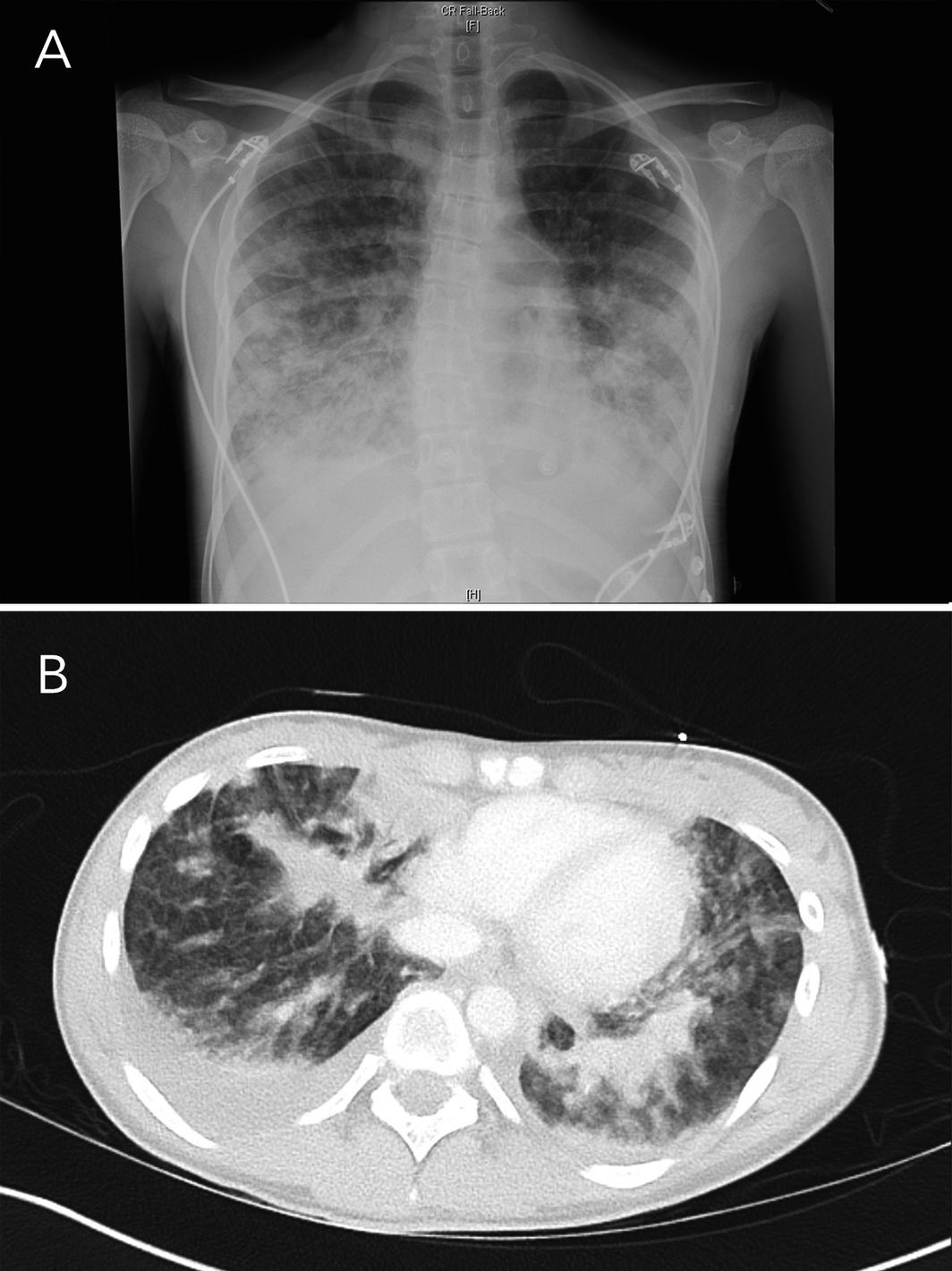