Objectives: To estimate the annual burden of mortality and the associated health costs attributable to air pollution from wood heaters in Armidale.

Conclusions: The substantial mortality and financial cost attributable to wood heating in Armidale indicates that effective policies are needed to reduce wood heater pollution, including public education about the effects of wood smoke on health, subsidies that encourage residents to switch to less polluting home heating (perhaps as part of an economic recovery package), assistance for those affected by wood smoke from other people, and regulations that reduce wood heater use (eg, by not permitting new wood heaters and requiring existing units to be removed when houses are sold).

The known: Residential wood heating is a major source of hazardous air pollution in many Australian cities and towns.

The new: In Armidale, a regional NSW city of 24 504 people, 14 premature deaths per year are attributable to air pollution from wood heaters. This corresponds to 210 lost years of life, at an estimated cost of $10 930 per heater per year.

The implications: Effective measures to reduce wood heater pollution are needed, including public education about the damage to health caused by wood smoke, providing incentives to switch to less polluting heating, and regulations that limit the use of wood heaters.

Domestic wood heating is a major source of air pollution in Australia, including fine particulate matter (particles less than 2.5 μm aerodynamic diameter, PM2.5), generally regarded as the most hazardous air pollutant1,2,3 (Supporting Information, part 1). For the 5.6 million residents of the Sydney–Newcastle–Wollongong region and surrounding areas, 420 premature deaths per year are attributed to PM2.5 pollution;4 in this Greater Sydney Metropolitan Region, wood heaters contribute 24–42% of anthropogenic PM2.5, compared with 7–17% for power stations and 17–19% for road vehicles.4,5,6 In Tasmania, 65 premature deaths per year were attributed to wood heater pollution during 2010‒2019, compared with four deaths per year ascribed to landscape fire smoke.7 However, wood smoke pollution from the extraordinary bushfires in eastern Australia was responsible for an estimated 417 excess deaths during 1 October 2019 ‒ 10 February 2020.8

Larger proportions of households in regional Australia use wood heating than in metropolitan areas. Air pollution monitoring in regional towns is generally limited, leading to misperception of the magnitude of wood heater pollution and the associated health burden. In 2018, an NSW government air pollution monitoring station was installed in Armidale (Northern Tablelands; population, 24 504), complemented by a network of eleven calibrated low cost monitors,9 enabling detailed characterisation of population PM2.5 exposure by season. In winter, cold, frosty nights are typical for Armidale, and about 40% of households use wood heating, the main source of air pollution in the city.9 Air pollution in Armidale exceeded the national daily PM2.5 standard (25 µg/m3) on 32 days in 2018; all exceedances were attributable to winter wood heater pollution10 (Supporting Information, part 2).

The aim of our study was to estimate the numbers of premature deaths, and the years of life lost and their associated health costs, attributable to wood heater pollution in Armidale, based on PM2.5 levels measured during 1 May 2018 – 30 April 2019.

We used autovariogram kriging to interpolate daily mean PM2.5 measurements based on data from the Armidale monitoring network, comprising the NSW government air pollution monitoring station equipped with a TEOM 1405 with filter dynamics measurement system (ThermoFisher)11 and ten of eleven calibrated low cost monitors (PurpleAir); we excluded data from one monitor that appeared to be faulty.9 The interpolated measurements were aggregated to estimate daily population‐weighted PM2.5 exposure (DPWP25) for the Armidale Statistical Area 2 during 1 May 2018 – 30 April 2019, according to the 2016 usual resident population. We then defined two periods by examining the data: the wood heater pollution period and a background period not usually affected by wood smoke. For the wood heater pollution period, population‐weighted wood smoke PM2.5 exposure was defined as daily exposure exceeding the background period mean (further details: Supporting Information, part 3).

We estimated the number of premature deaths attributable to wood heater emissions using methods similar to those of a recent analysis of the health impacts of ambient smoke in Tasmania7 (Supporting Information, sections 3‒6). We converted mean daily population‐weighted wood smoke PM2.5 exposure during the wood heater pollution period to mean annual wood heater PM2.5 population exposure (AWPE), and then used the Global Exposure Mortality Model (GEMM)12 to estimate the increase in number of premature deaths by sex and 5‐year age group and calculate years of life lost (YLL) and reductions in life expectancy (Supporting Information, part 5). We also estimated the mortality parameters using an alternative risk function, the Health Risks of Air Pollution in Europe (HRAPIE) model, in which the risk is defined as 1 for people under 30 years of age and 1.062AWPE/10 for people over 30.13

The financial cost associated with the impact on mortality was estimated using a value of statistical life year of $213 000 for the first year of life lost, and discounted 3% per year for subsequent years lost, as recommended by the Office of Best Practice Regulation.14

All analyses were undertaken in R 4.0.2 (R Project for Statistical Computing).

Our analysis of publicly available data did not require formal ethics approval.

The estimated numbers of premature deaths and YLL attributable to wood heater PM2.5, and the associated cost, indicate that wood heater pollution should be reduced in Armidale and other locations where wood heating is a major source of air pollution.

A decade ago, research commissioned by the NSW government found that wood heater pollution in NSW caused $8 billion in health costs over 20 years, and that this could be reduced by 75% by requiring that wood heaters be removed when houses are sold and not permitting the installation of new units.15 For 35 heaters in New Zealand satisfying requirements stricter than the current AS/NZS 4013 standard, mean real life emissions were 6.5 g particulate matter per kg dry wood, eight times as high as the mean of 0.85 g/kg during AS/NZS testing.16,17 This illustrates that newer wood heaters are little better than those tested in Tasmania in 2006 and 2007 (mean real life emissions, 9.4 g/kg).18

Limited awareness of the health costs of wood heater pollution (and the magnitude of the emissions) has hindered the development of effective policy. Governments and the public need accurate information to make informed decisions. The vice‐president of the Rural Doctors Association of Victoria, Rob Phair, wrote in September 2020:

Doctors can make a big contribution in discussions about air pollution with our patients, local communities and government. The discussion about wood heaters should resemble the discussion about tobacco smoking… Smoking in public places is recognised as harmful to public health. The same recognition should be extended to domestic wood heaters.19

In 2020, the Australian Medical Association Victoria supported calls for a buyback scheme to remove wood heaters from homes20 because they were estimated to cause $8 billion in health costs over ten years in Victoria.21 In 2019, the authors of an overview of air quality research funded by the National Environmental Science Program on behalf of the Australian Department of the Environment and Energy proposed a Clean Air Plan for Sydney; one priority was legislation that “works towards eliminating the use of wood‐heaters in urban areas”.22 This would entail requiring wood heaters to be removed when homes are sold, not permitting the installation of new heaters, education programs, assistance for residents affected by other people’s wood smoke, and subsidies to encourage switching to efficient heating with lower emissions. A national survey by Asthma Australia of 25 000 people in November 2020 found that most people, particularly those with asthma, support phasing out wood heaters and using better, healthier alternatives.23

The Wood Heater Replacement Program in Launceston (2001‒2004) was part of a package that reduced winter PM10 pollution by an estimated 16.6 µg/m3 and was associated with substantial health benefits, reducing the numbers of wintertime respiratory (by 28%) and cardiovascular disease deaths (by 20%), and annual all‐cause mortality in males (by 11.4%). The program cost about $29 per resident.24 However, progress stalled once subsidies ceased and residents installed new wood heaters (Supporting Information, section 8).

Our analysis of the health effects of wood heaters was restricted to the risk of premature death. Other adverse health outcomes of air pollution include premature birth, lower birthweight, stroke, neurodegenerative disease, diabetes, deep venous thrombosis, and cardiovascular and lung disease25 (Supporting Information, section 9). A recent review found that both short and long term exposure to air pollution may be important aggravating factors for coronavirus disease 19 (COVID‐19) transmission, severity, and lethality.26 Support for reducing wood heater pollution could be provided as part of a COVID‐19 economic recovery package, similar to grants that were available for building new homes or undertaking renovations costing more than $150 000.27 Subsidies for replacing wood heaters with cleaner options (in conjunction with upgraded insulation, when necessary) would provide additional employment, improve health, reduce heating costs for households that buy firewood, and help slow global warming (further discussion of policy implications: Supporting Information, section 10).

Estimates of the impact of air pollution are highly sensitive to the choice of exposure risk function. The 2013 HRAPIE meta‐analysis was based on eleven studies of PM2.5 and mortality,13 whereas the 2018 GEMM included 41 cohorts from 16 countries;12 its estimates may therefore be more robust (Supporting Information, section 11).

Effective policies are needed to reduce wood heater pollution, including public education supported by health professionals about the effects on health of wood smoke, subsidies that encourage residents to switch to efficient, less polluting home heating (perhaps as part of an economic recovery package), and regulatory changes. 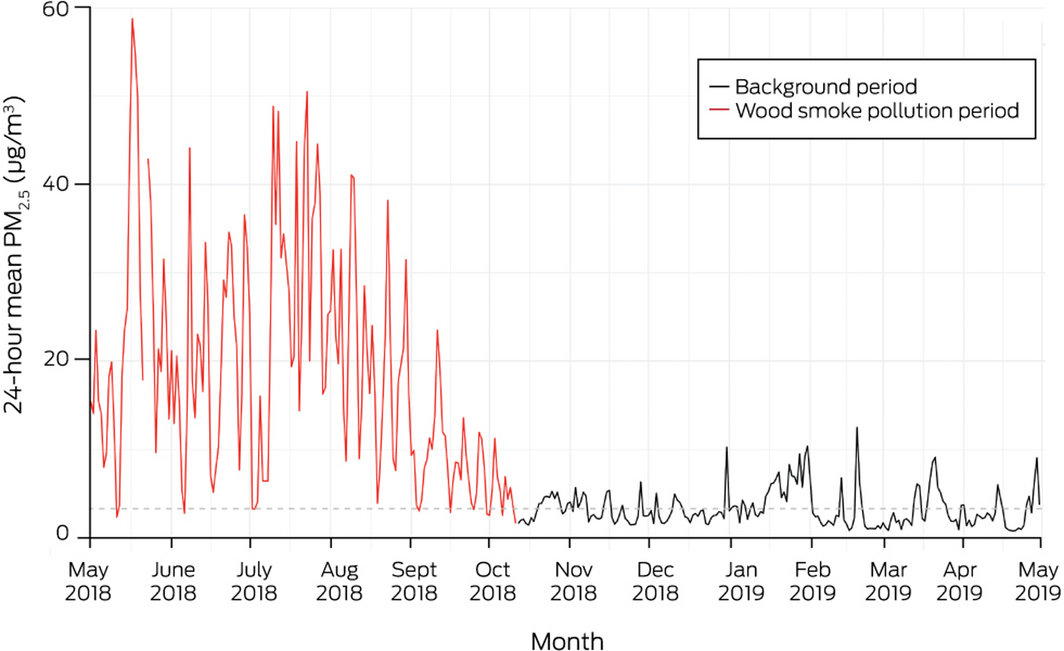