Objective: To test the urban myth that surplus chocolate Easter Bunnies are re‐packaged as Santa Clauses for the following Christmas holiday season.

Conclusion: Although about one‐third of our survey respondents did not rule out the possibility of seasonal sweets being re‐used, WBCT imaging found no similarity between chocolate foil‐wrapped Easter and Christmas figurines, providing solid evidence against this urban myth. Chocolate Santa Clauses are unlikely to pose a significant threat to hospital food hygiene requirements.

The known: Seasonal chocolate figurines are often given to inpatients and health care professionals during the Christmas season. If unsold chocolate Easter Bunny figurines are re‐used as chocolate Santa Clauses (and vice versa), as is widely believed, it would pose a potential threat to hospital hygiene.

The new: Independent rating of whole body computed tomography scans by blinded radiology experts indicated that the inner structures of chocolate Christmas Santas and Easter Bunnies are dissimilar, inconsistent with the recycling of chocolate figurines.

The implications: There is no radiological evidence for chocolate Santa Clauses being re‐used Easter Bunnies, allowing us to give and consume seasonal sweets in hospitals with a clear conscience.

Christmas is often a difficult time for people staying and working in hospitals. Small chocolate treats such as Santa figurines can help make the day just a little sweeter for both patients and health care professionals, and are therefore often given as presents during the holiday season.

A widespread urban myth is that unsold chocolate Easter Bunny figurines are re‐packaged in seasonal foil and returned to shelves as chocolate Santa Clauses. Should there be any grain of truth in this myth, the strict hygiene chains intended to prevent hospital patients and personnel from food‐borne, transmissible bacterial (eg, Salmonella and Clostridium spp.) and viral (eg, norovirus) disease may be compromised.

The Federal Association of the German Confectionery Industry (BDSI) has repeatedly denied the accusation of re‐packaging, as food hygiene legislation prohibits re‐use of already delivered products.1

While the coronavirus disease 2019 (COVID‐19) pandemic has highlighted the importance of protecting patients and health care professionals from imported pathogens, earlier food‐borne infections that posed significant public health threats did not receive much media attention.2

Screening methods are required to ensure that chocolate gifts do not contain any potentially harmful ingredients. Researchers in Manchester found that computed tomography (CT) imaging is suitable for revealing the complex structure of (seasonal) sweets.3

The objective of our study was to use CT imaging to test the urban myth that seasonal chocolate figures are re‐wrapped and re‐sold. We also developed a questionnaire to survey medical and non‐medical hospital employees, patients, and visitors about their beliefs about the re‐packaging hypothesis.

The CRECHE (Computed tomography to Rebut the myth that chocolate Easter and Christmas Hollow figurines are re‐used and may not be safely Edible) study was conducted at two tertiary referral trauma centres in Germany (Berlin and Duisburg) and their departments of radiology. The study was prospectively registered with Current Controlled Trials (2 July 2020; https://www.isrctn.com/ISRCTN16847363).

Our hypothesis was that the belief that chocolate Easter Bunnies are re‐packaged as Santa Clauses for re‐sale is an unsubstantiated urban myth. Low dose CT imaging is a fast and reliable screening tool for depicting the inner shapes and contours of hollow chocolate seasonal figurines. If CT images of Santa Claus and Easter Bunny figurines from the same manufacturer are similar, it could not be excluded that the products were re‐used and should therefore be enjoyed with caution. Clear differences between the figurines, however, could help refute the legend.

In the absence of reliable prior information, our investigation was exploratory. Our objectives were:

Members of the investigator group independently purchased, at their discretion, commercial chocolate Easter Bunnies and Santa Claus figurines of any size and shape from any manufacturer during the Easter and Christmas seasons of 2020. Duplicates were retained as reserves but excluded from the analysis. Specimens were assigned unique identification numbers and physically measured without removing the foil (maximum height, width, and depth, measured with a tape measure; weight determined on a kitchen scale).

Images were reconstructed as 2 mm slices in axial, coronal, and sagittal planes with a standard kernel. 3D imaging volume rendering techniques were applied using post‐processing software (either ISP Portal, Philips, or syngo.via, Siemens). Radiologic indices included maximum height, width, and depth of the figurine, as well as the maximum chocolate layer thickness in three regions of interest (bottom, top, and lateral walls). As various approaches to automated image analysis proved unreliable in a pilot study, these morphometric characteristics were measured manually. All images were transferred to our institutional Picture Archiving and Communication Systems for further processing and evaluation. Expert ratings were made on a 100 mm visual contour resemblance scale (CRS) (online Supporting Information, figure 1).

The primary outcome was the mean difference in CRS ratings by four independent, board‐certified radiologists of WBCT images of the Easter Bunny and Santa Claus figurines. This part of the investigation was conducted during 2‒18 December 2020. Observers were blinded to brand and type while judging whether the contour and shape of the chocolate object resembled the Easter Bunny or Santa Claus. Co‐primary outcomes were inter‐observer agreement and individual ratings. The secondary outcomes were the results of the GRINCH survey.

We did not attempt a formal sample size calculation, as reliable prior information, validated assessment instruments, and minimally relevant effect sizes were not available. For the CRECHE study experimental imaging component, we adhered to the pragmatic rule of thumb for pilot studies (12 participants per group), which allowed both a reasonable number of research WBCT timeslots in otherwise busy trauma centres and sufficient precision for quantitative analyses.4 For the GRINCH questionnaire survey, we assumed that evaluable results from 20 patients and 20 employees per study site (80 participants in total) would be sufficient to gain insight into the prevalence of the urban myth of chocolate re‐wrapping.

As our study gained unexpected interest among passers‐by and their willingness to participate was great, we decided to leave this part of the CRECHE study open until at least 400 eligible questionnaires had been collected. All data were stored in the secuTrial electronic data capture system (interActive Systems), complying fully with the European Union General Data Protection Regulation 2016/679.

The institutional review board of the Berlin Chamber of Physicians (Ärztekammer Berlin) approved the investigation plan and issued a participant consent waiver.

Between 9 April and 15 May 2020, CRECHE investigators bought 21 chocolate Easter Bunnies from eleven manufacturers (dates of expiry, 4 July 2020 – 20 February 2021). Between 20 October and 7 November 2020, the investigational sample was completed by 23 chocolate Santa Clauses from eleven manufacturers (best‐before dates, 1 March 2021 – 1 January 2022). After excluding doubles, 18 Easter Bunnies and 15 Santa Clauses were included in our analysis (Box 1, Box 2).

Our study explored the urban myth that unsold chocolate Easter Bunnies are re‐wrapped and sold as chocolate Santa Clauses. Using advanced radiological imaging and the judgment of four independent radiology experts, we did not find evidence supporting this belief. While about 30% of respondents in our survey believed the myth, most patients and hospital personnel did not regard the consumption of expired chocolate a safety threat.

We cannot discuss here the evidence for the favourable physiological effects of consuming chocolate, especially dark chocolate (eg, anti‐oxidative and anti‐inflammatory properties), nor the adverse effects (eg, increased serum glucose levels, risks of diabetes and becoming overweight).5 Readers must decide for themselves whether enjoying a piece of chocolate has a stimulating impact on their mood; this study was not designed to encourage or dissuade people from consuming chocolate. Hospitals proved to be suitable research environments for our survey study of the association between chocolate exposure and certain endpoints potentially relevant to health care professionals.6

Implications for clinicians and policymakers

With 220 million chocolate Easter Bunnies and 151 million chocolate Santa Clauses produced in Germany during 2019 alone,7 the confectionery industry would face a significant loss of trust and sales should doubts about the transparency of their manufacturing practices arise.8 Dual processing of chocolate could increase the risk of contamination not only by pathogens, but also by industrial residuals. In 2016, one small plastic piece found in a chocolate bar led to the recall of products in 55 countries.9 Further, the foil wrapping of chocolate figurines can pose a choking hazard,10 and it is unclear whether re‐packaging would increase this risk. As it has been estimated that manufacturing new chocolate figurines from recycled ones would increase production costs by about 30%,11,12 it is more likely that leftover chocolate figurines are discarded rather than re‐used.

Assessment of the outer and inner shapes of seasonal figurines is only one of many possible surrogate measures for detecting recycling. Re‐use of chocolate from other sources might be detected by characteristic contaminants carried over from earlier packaging. Mineral oil hydrocarbons from cardboard are frequently found in chocolates in Advent calendars,13 making them candidates for detecting illegitimate recycling of seasonal chocolate products. However, Easter Bunnies and Santa Clauses are typically covered by the same material (aluminium foil), making re‐wrapping a challenging analytic task. Advanced food chemical methods could assess the degree of degradation and the age of ingredients. While technically possible, the CRECHE group food chemist rated the effort, resources, and costs of such analyses excessive given the likelihood of meaningful scientific findings.

Our study was susceptible to several methodological shortcomings and restrictions. The choice of figurines was not entirely random, although shoppers were free to buy the Easter Bunny or Christmas Santa of their choice. Oversampling of common or premium brand products was, however, likely, thereby limiting the generalisability of our findings. The sample size for the experimental component of our study was rather small, but CRS ratings were homogenous and inter‐rater reliability was excellent for WBCT assessments. This method proved to be both feasible and precise in depicting the structure of chocolate figurines, although determining the thickness of chocolate layers relied on manual assessment by a radiologist. Machine learning may one day assist WBCT, adding artificial intelligence to the screening of chocolate figurines during the holiday season.

The CRECHE study was the first scientific project, using advanced radiologic imaging, to investigate the urban myth that unsold chocolate Easter Bunnies are re‐packaged as Santa Clauses for the subsequent Christmas season. Our radiological evidence did not support this myth. Chocolate Santa Claus figurines can be consumed in hospital settings without concern, with zero risk of food hygiene being compromised by re‐used chocolate bodies.

All data are available upon request to the study investigators. 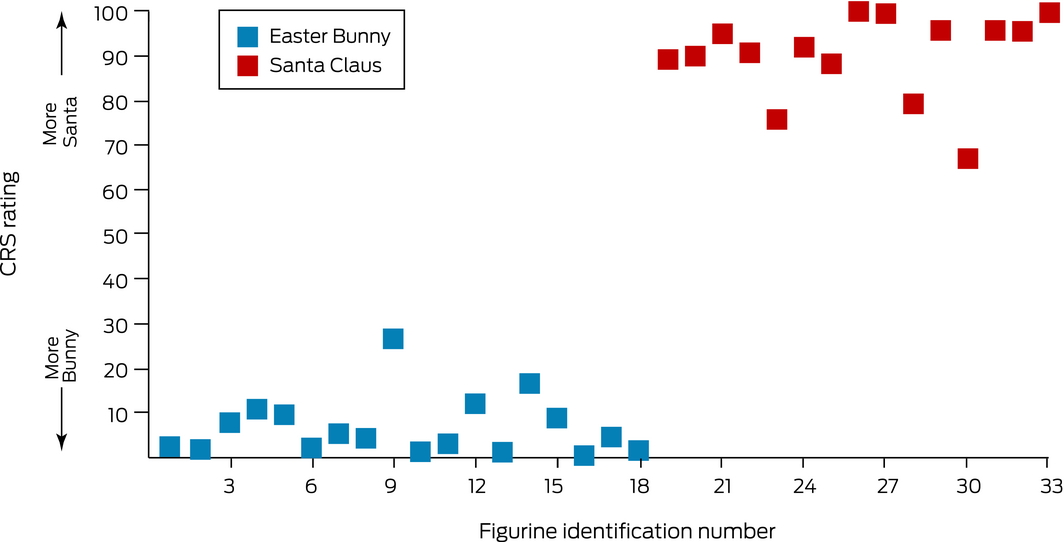 We thank the staff of both institutions and all volunteers for their efforts and willingness to provide anonymised data for this investigation. We also thank Stefan Müller‐Lissner, head of the institutional review board (IRB) of the Ärztekammer Berlin, well as all IRB members, for their sense of humour, permission to include minors (ie, chocolate figurines produced during or before the year of the investigation) without informed consent, and their generosity in providing IRB approval at no cost. We also thank Melissa Leis‐Schrage for proofreading and editing the manuscript.

All contributors have a conflict of interest, as they or their relatives are past or current consumers of chocolate figurines, although they have no preference for any brand investigated here.