Objective: To quantify the burden of invasive group A Streptococcus (GAS) disease in Western Australia during 2000–2018.

The known: Invasive group A Streptococcus (GAS) infections are associated with substantial morbidity and mortality. Population‐level data on invasive GAS disease in Australia are scarce, and none are available for Western Australia.

The implications: National mandatory notification of invasive GAS disease would be appropriate, and overcoming the social determinants of its incidence is important. Other reasons for its increasing incidence should be investigated.

Invasive Streptococcus pyogenes (group A Streptococcus, GAS) infections are associated with high morbidity, mortality, and financial costs.1 Reports of increasing incidence in Australia2 and overseas3 justify the surveillance of GAS infections. Contemporary estimates of disease burden are essential for assessing the value of GAS vaccine candidates4 and for policies regarding post‐exposure prophylaxis for close contacts of people with GAS infections.5

Western Australia is the largest Australian state, covering about one‐third of the continent; the population was 2.6 million people in 2018 (10% of the Australian population), including about 2 million living in the capital, Perth, and 4% of the population were Indigenous Australians.9,10 The climate ranges from tropical in the north, desert in the central regions, to temperate in the south. The climate of the Kimberley and Pilbara regions is tropical, and the proportion of Indigenous people is higher here than in other WA regions (2016: Kimberley, 42%; Pilbara, 14%).11 Regional, climate‐based, and demographic variation in health‐related variables can accordingly be explored in WA, as in our previous investigation of lower leg cellulitis, based on linked hospital and emergency department data.12,13,14

Differences between Indigenous and non‐Indigenous Australians in GAS disease burden have previously been reported.2 In this investigation, we quantified the burden of invasive GAS infections in WA during 2000–2018 in terms of incidence, length of hospital stay, and all‐cause mortality for the two population groups.

We analysed data for cases of GAS infection during 1 January 2000 – 31 December 2018. Microbiologically confirmed cases were identified in PathWest laboratory data, defined as cases in which GAS had been isolated from a normally sterile site (blood, other sterile fluid, sterile tissue). Diagnoses of GAS infection were identified in the HMDC by a principal International Classification of Diseases, tenth revision, Australian modification (ICD‐10‐AM) diagnostic code for GAS‐specific invasive disease. To be included, a case with a relevant principal diagnosis without a GAS‐specific descriptor (eg, osteomyelitis) had to be accompanied by the ICD‐10‐AM code for GAS infection (B95.0) as the first additional diagnosis, without any ICD‐10‐AM codes for other bacterial infection diagnoses. All cases of GAS infection according to PathWest or HMDC definitions, or both, were included in our analysis (Supporting Information, table 1).

Pathology data for patients were grouped by hospitalisation (regardless of whether the hospitalisation fulfilled the HMDC GAS infection definition) if samples were collected within two days of an admission date, including during prior outpatient clinic or emergency department specimen collection. The record date for a case was the first collection date for each episode, or the admission date if a confirmatory isolate was not available. All records for an individual within a 30‐day period were treated as a single case.8 Our analysis allowed more than one infection in an individual if the infection episodes were separated by more than 30 days. We also conducted an analysis in which only one case per individual was included, to assess incidence without intra‐individual repeat invasive GAS disease.

Age, sex, hospital admission and separation (discharge) dates, diagnostic codes, region of residence, remoteness of residence area (major cities, inner regional, outer regional, remote, very remote),17 postcode‐based Socio‐Economic Indexes for Areas (SEIFA) index of relative social disadvantage (IRSD) quintiles,18 and admission to intensive care were extracted from the HMDC. Indigenous status was a validated variable provided as part of the linkage process. Date of death was extracted from death registrations. Region of residence was classified as tropical (Kimberley and Pilbara regions) or non‐tropical, and as metropolitan or regional. PathWest data included the unique patient identifier code, sample collection date, and isolation site. For cases identified only in PathWest data, relevant demographic data (eg, age, sex of the patient) were obtained from the HMDC, as it includes all hospital records for WA. Patients were classified as WA residents, Indigenous Australians, or as living in a tropical area if assigned these classifications for any part of a case.

All analyses were performed in Stata SE 14.0. Records of hospitalisations with dates later than a person’s date of death were removed (20 records, < 0.01% of all records). For five people with inconsistencies in month and year of birth (0.2% of individuals), the most recent data were included. Cases with missing demographic data were included, except in analyses stratified by the missing variable. We compared data for the periods 2000–2009 and 2010–2018 to assess broad changes during the study period. Seasonality was explored by wet (November – April) and dry (May – October) seasons for tropical areas, and by the usual four seasons for non‐tropical regions.

Data for WA residents only were included in incidence calculations. Mid‐year population denominators were obtained from Australian Bureau of Statistics census estimates and projections.9 Crude incidence was calculated, stratified by sex, age group, Indigenous status (from 2001, as relevant data for 2000 were not readily accessible), and region (from 2001, for the same reason). Direct age‐standardised annual incidence was calculated, standardised to the age distribution of cases in the year 2000 (the first study year). Incidence was analysed in negative binomial regressions (selected because the data were over‐dispersed) adjusted for year, age group, and sex, for Indigenous status and year, or by Indigenous status adjusted for year.

Inter‐hospital transfers were treated as single admissions when calculating the median hospital length of stay. All‐cause mortality at 30 and 90 days after the record date was calculated. Differences in 30‐day mortality by Indigenous status were assessed by logistic regression, adjusted for age group and sex.

We identified 2237 cases of invasive GAS disease during 2000–2018: 1950 based on the PathWest definition (87%) and 656 according to the HMDC definition (29%); 369 HMDC‐confirmed cases (56%) also fulfilled the PathWest criterion, whereby the proportion was larger for public hospital cases (352 of 555, 63%) than private hospital cases (17 of 101, 17%). Group A Streptococcus was isolated from blood in 1089 of the 1950 pathology‐confirmed cases (56%), from tissue in 750 (38%), and from other sterile fluids in 224 cases (12%) (multiple isolates possible). While 1950 cases were based on the PathWest definition, more than one diagnostic code could be associated with each PathWest‐associated case because of the 30‐day case period and the possibility of inter‐hospital transfers. The most frequent principal diagnoses for hospitalisations with a corresponding GAS isolate (ie, samples within two days of admission) were GAS sepsis (289 of 2154 cases, 13%) and limb cellulitis (a diagnosis not included in the HMDC definition; 106 of 2154, 5%).

The overall incidence of invasive GAS disease was highest during the first year of life and for people aged 75 years or more (Box 3). Among Indigenous Australians, however, incidence increased fairly steadily with age (Box 4).

The high incidence of invasive GAS infections among Indigenous Australians is consistent with other Australian2 and overseas reports21 of higher incidence among indigenous peoples. The mean annual incidence of acute rheumatic fever, an immune‐mediated GAS complication, was also higher during 2013–2017 among Indigenous Australians in WA (mean 67.3 cases per 100 000 population; non‐Indigenous people: mean 0.3 cases per 100 000 population).22 Social determinants such as household overcrowding are the major factors underlying high rates of invasive GAS disease in disadvantaged populations.23 The incidence of impetigo, which predisposes to invasive GAS disease, is higher among Indigenous than non‐Indigenous Australians; measures for preventing impetigo include handwashing and chlorinated or salty swimming pools.24 The higher incidence of invasive GAS disease in tropical areas of WA is consistent with data for lower leg cellulitis in WA, primarily caused by β‐haemolytic streptococci.14 However, the proportion of cases in areas of greatest socio‐economic disadvantage was larger in tropical than non‐tropical regions, indicating that social determinants also play a role.

A combination of pathogen, host, and health system factors may explain the increasing incidence of GAS disease. The emergence of the M1T1 clone has contributed to a global resurgence of invasive GAS disease.1 Prospective emm typing of invasive GAS isolates could aid understanding of transmission and inform the local utility of GAS vaccine candidates.

The question of whether changes in the incidence of immunosuppressive comorbid conditions — for example, the prevalence of diabetes in Australia increased from 3.3% in 2001 to 4.4% in 2017‒1825 — has contributed to the rising incidence of invasive GAS disease could be investigated with the help of the HMDC data.

Health system factors could also be important. For example, awareness campaigns and altered clinical coding guidelines contributed to an increase in diagnoses of sepsis in Australia.26 However, the sharp increases in invasive GAS incidence during 2006‒2008 and 2015–2017 were largely related to increased numbers of microbiologically confirmed cases, so that the effect of any diagnostic coding changes was minor. Changes in testing practices in hospitals served by PathWest might explain some of the increase, and the West Australian Smart Application of Blood Culture Initiative is currently assessing PathWest blood culture practices since 2006.27

Although it serves most public hospitals, PathWest is not the sole pathology provider in WA (estimated population coverage for blood cultures, 80%; personal communication, Susan Benson [Curtin University and University of Western Australia], Oct 2020). For this reason, we augmented laboratory data with hospital records, including 287 cases (13%) without laboratory confirmation. The proportion of microbiologically confirmed HMDC cases was larger for public than private hospitals, which suggests that HMDC cases without PathWest confirmations were probably confirmed by private microbiology providers. The conservative diagnostic definition for HMDC cases minimised the effect of any HMDC coding errors. The administrative data we analysed were not collected for research purposes, but the use of these data in clinical practice (PathWest), clinical activity reporting (HMDC), and for informing national mortality data (death registrations) meant that the linked data analysis was appropriate for our study. 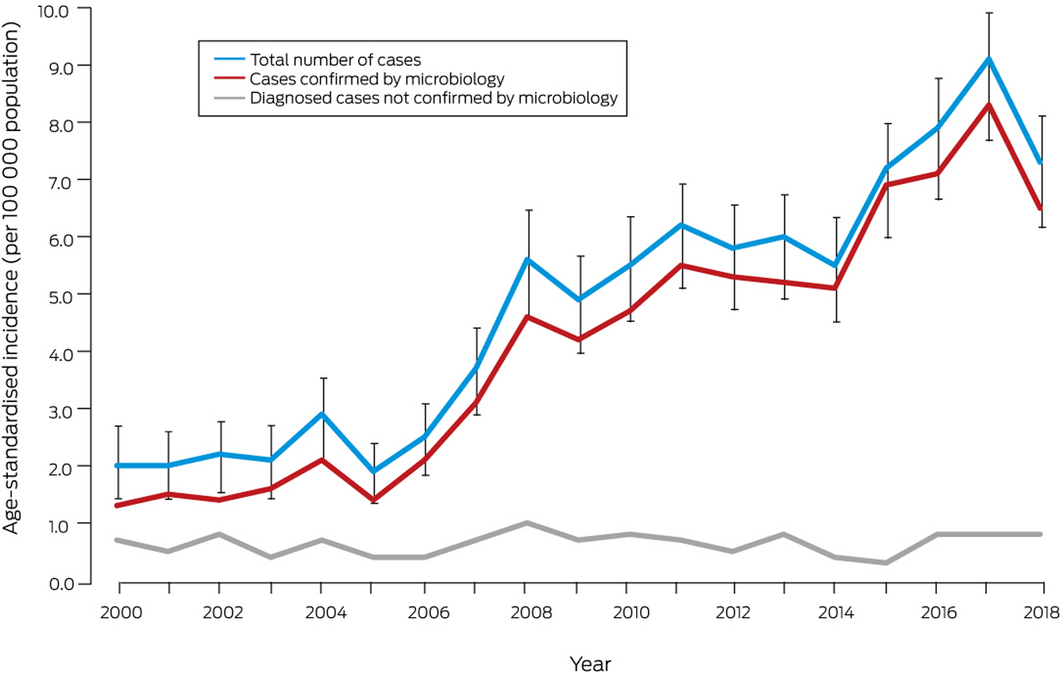 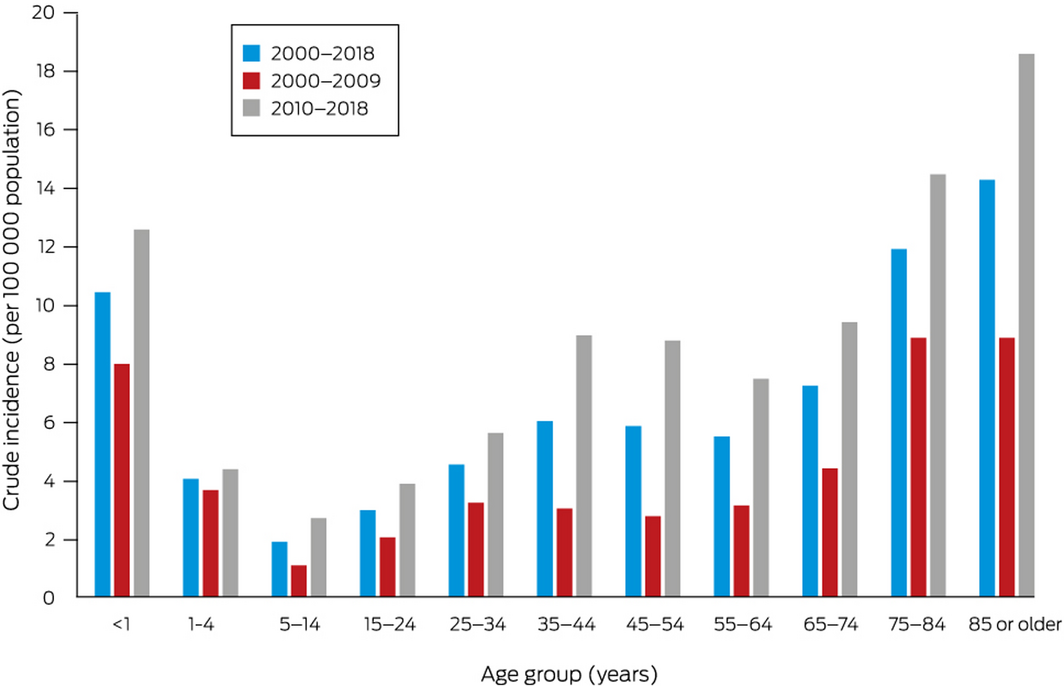 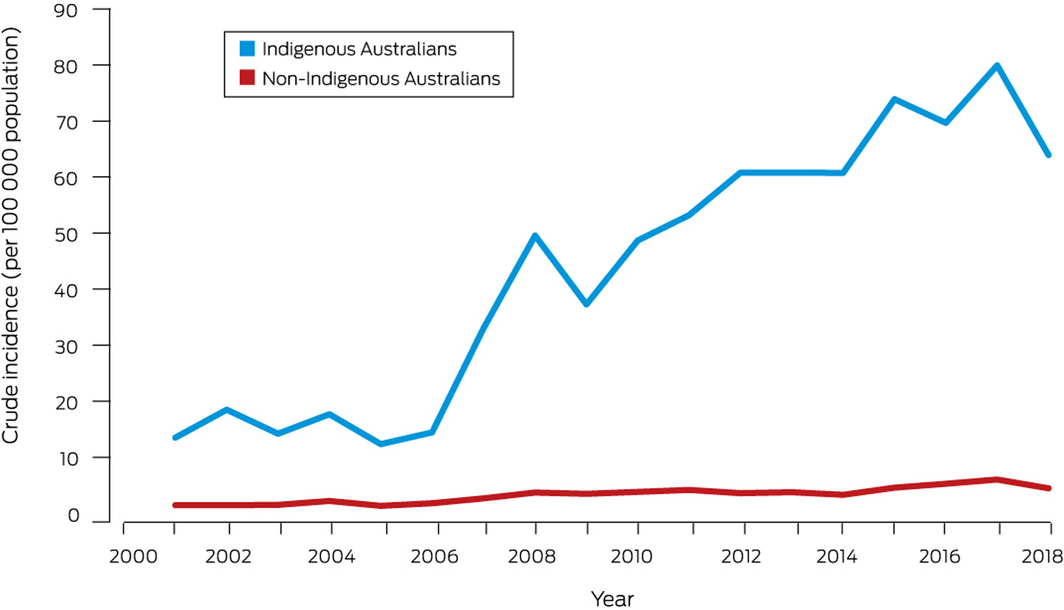 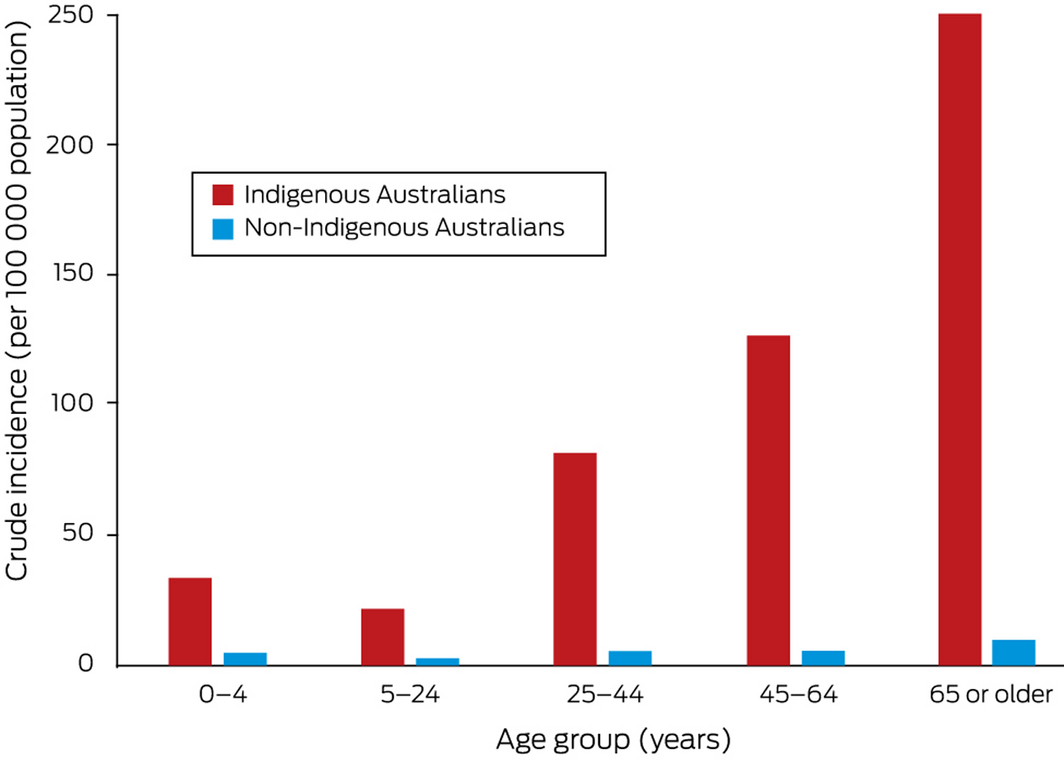 Data acquisition costs for this study were jointly funded by the Telethon Kids Institute and the Department of Infectious Diseases, the Fiona Stanley Fremantle Hospitals Group. We acknowledge the WA Data Linkage Branch for providing the linked data, Ryan Shave (WA Department of Health) for assistance with research governance approvals, Brett Cawley (PathWest) for assisting with identifying PathWest cases, Susan Benson (Curtin University, University of Western Australia) for assisting with blood culture results interpretation, and the people whose data were analysed in this study. Cameron Wright completed this work as part of scholarly activity for his Doctor of Medicine degree from the University of Western Australia.