The Royal Commission into Aged Care Quality and Safety has highlighted the high rates of polypharmacy and potential medication‐related harm in residential aged care facilities (RACFs) in Australia.1 Residential medication management review (RMMR) is a government‐funded service for facilitating quality use of medicines in RACFs.2 Previous studies have found that RMMRs by accredited pharmacists and general practitioners identify a mean of 2.7–3.9 medication‐related problems per resident, and 45–84% of pharmacists’ recommendations were accepted by GPs.3 Guidelines recommend that residents should generally receive an RMMR on entering an RACF and when their clinical circumstances change,4 but annual claims data5,6 and recent research indicate that not all residents receive RMMRs.7

We examined time to first RMMR after RACF entry by analysing data for the national historical cohort of the Registry of Senior Australians (ROSA).7 In ROSA, de‐identified data collected during aged care eligibility assessments are linked to information about government‐subsidised aged care services, general practice and allied health services subsidised under the Medicare Benefits Schedule (MBS), medicines subsidised under the Pharmaceutical Benefits Scheme (PBS), and the Australian Institute of Health and Welfare National Death Index.8 Non‐Indigenous people aged 65 years or more who first entered permanent residential care during 1 January 2012 – 31 December 2015, had received an entry‐into‐care assessment within 100 days, and had received at least one PBS‐subsidised medication during the preceding year were included. Recipients of Department of Veterans’ Affairs‐funded services and people who had previously undergone RMMRs (eg, during transition care) were excluded. The cumulative incidence function was used to determine time to first MBS claim lodged by GPs for RMMRs (item code 903) or Home Medicines Reviews (HMRs) (item code 900) after entry to permanent residential care, adjusted for competing events (death, or permanent departure from the first RACF for another reason) using the Fine–Gray method,9 with follow‐up to 31 December 2016. Statistical analyses were undertaken in SAS 9.4. The University of South Australia (reference, 200489) and Australian Institute of Health and Welfare (reference, E02018/1/418) Human Research Ethics Committees provided ethics approval for the study.

Our findings are generalisable to all older Australians entering RACFs, as ROSA captures data for all people aged 65 years or more who access government‐subsidised permanent residential aged care in Australia. We could not determine why residents were not referred for RMMRs, nor the impact of recent program changes2 on RMMR uptake and resident outcomes. In 2014–15, fewer GP medication review claims were reimbursed under the MBS (54 803 RMMRs, 63 872 HMRs) than pharmacist claims (93 517 RMMRs, 72 607 HMRs).5,6 Analysing GP claims may underestimate the number of RMMR reports prepared by pharmacists because GP claims are submitted after the medication management plan is discussed with the resident or family, while pharmacist claims are submitted after the report is sent to the GP.7 MBS claims may not be lodged if the full RMMR process cannot be completed (eg, because the resident died, their clinical circumstances had changed, or the RMMR report was not received or followed up), or claiming may be overlooked. Linkage with pharmacist claims data at the individual resident level could facilitate investigation of these limitations.

Despite RMMRs being a key means for minimising medication‐related harm, MBS claims for RMMRs are lodged for only a fraction of residents who enter RACFs. The potential underuse of the program may be a missed opportunity for identifying and resolving medication‐related problems in Australian RACFs. 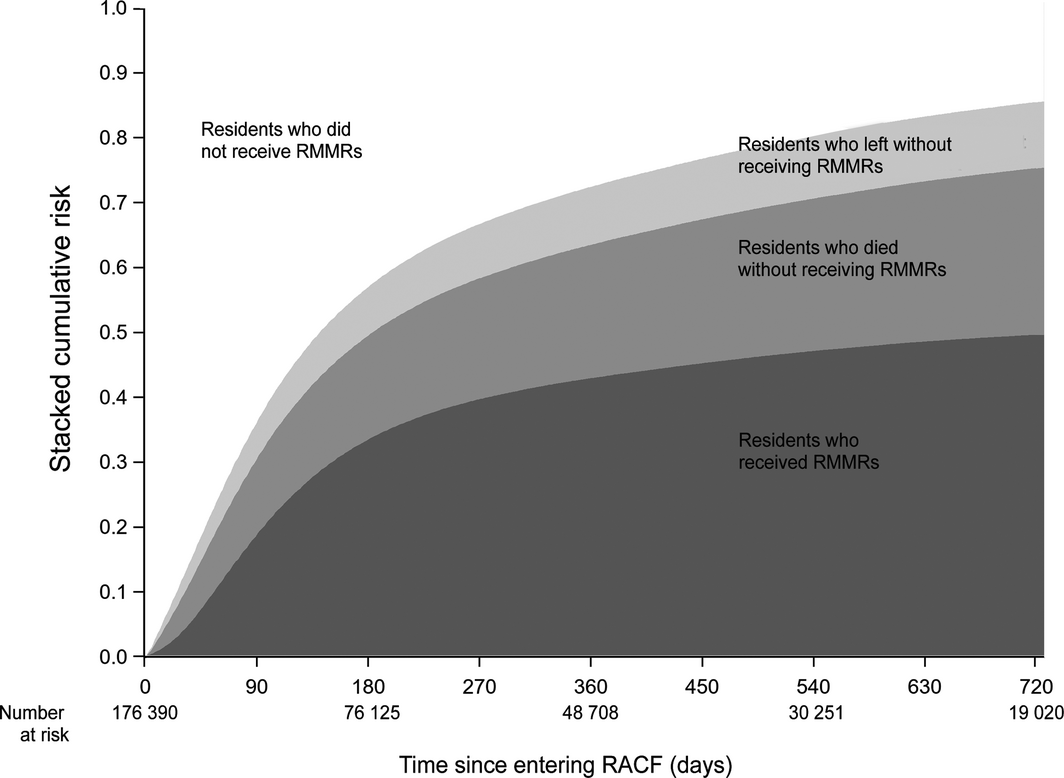 Craig Whitehead is a non‐executive director of Helping Hand Aged Care. Megan Corlis was employed by Helping Hand Aged Care at the time of the study. Janet Sluggett is a registered pharmacist and accredited to perform residential medication management reviews. Janet Sluggett and Simon Bell have received grant funding from Resthaven Incorporated during the past 36 months. Janet Sluggett and Maria Inacio have received grant funding from the Australian Association of Consultant Pharmacy in the past 36 months.