Medicare Benefits Schedule (MBS) data indicated that there were 37% fewer screening procedures for breast cancers and 55% fewer for colorectal cancers in April than in March 2020.1 We examined the temporal relationship between coronavirus disease 2019 (COVID‐19)‐related restrictions in Victoria during 1 April – 15 October 2020 and cancer pathology notifications to the Victorian Cancer Registry (VCR), to estimate their impact on cancer diagnoses.

Victorian legislation requires pathology services to notify reportable cancer diagnoses to the VCR.2 The E‐Path system, installed in all Victorian pathology services during 2013–2018,3 automatically transmits notifications to the VCR together with pathologist report authorisations. During 2019, 97 313 of 104 025 cancer pathology notifications to the VCR (94%) were received via E‐Path (data supplied by author LB). Changes to the E‐Path system during 2019 meant that we were unable to directly compare notification numbers for 2019 and 2020.

We therefore modelled cancer incidence during 2014–2018 by Poisson regression. A spline function was fitted to VCR cancer incidence data for weeks 1–52, adjusted for day type (working or non‐working day/public holiday) and year, and the fitted curve used to predict daily incidence during 7 January – 15 October 2020. Predicted incidence was re‐scaled to estimate expected notification numbers; the scale factor was the number of notifications during the baseline period — 1 February – 16 March 2020, allowing a two‐week washout period before restrictions were formally announced — divided by the predicted incidence during this period. Observed and predicted notification numbers were compared using Poisson regression, with the expected number as an offset term, enabling estimation of relative reductions with 95% confidence intervals (CIs). Differences between predicted and actual notification numbers were estimated, both overall and for specific groups (eg, by tumour or age group), based on the pertinent incidence data. As a single cancer diagnosis can be associated with several pathology notifications, the number of undiagnosed cancers was estimated by multiplying the difference in notification numbers by the ratio of newly diagnosed tumours to pathology notifications in 2018 (Supporting Information, table 1). The confidence interval for the number of undiagnosed cases was based on the Poisson model, keeping the ratio of newly diagnosed tumours to pathology notifications constant. In sensitivity analyses, data were fitted to polynomial models, different baseline periods were used, or data were restricted to reportable cancer diagnoses. The study was exempted from formal ethics review by the human research ethics committee of Cancer Council Victoria.

During 1 April – 15 October 2020, there were 5446 fewer notifications of new cancer diagnoses than predicted by our primary model (predicted, 54 609 v observed, 49 163; relative reduction, –10.0%; 95% CI, –10.8% to –9.2%) (Supporting Information, figure 1); we estimated that there were 2530 undiagnosed cancers (95% CI, 2327–2731). The relative reduction was greatest during 1 April – 4 May 2020 (Box 1). By tumour group, the relative reductions were most marked for prostate cancer, head and neck tumours, melanoma, and breast cancer; they were greater for men, people aged 50 years or more, and for people in areas of higher socio‐economic position (Box 2). The pattern of difference in notifications varied between tumour groups (Supporting Information, figure 2).

The 6.5‐month period of COVID‐19‐related restrictions in Victoria was accompanied by a 10% reduction in cancer pathology notifications; we estimated that about 2530 cancer diagnoses were either delayed or missed. The impact of delayed diagnosis is greatest for patients with aggressive cancers. Changes in care delivery during the restrictions, including suspension of screening services and outpatient clinics and postponed surveillance of existing cancers, may have affected notification numbers for some tumour groups and consequently the estimated number of delayed diagnoses.

Planning for a possible surge in cancer diagnoses over the coming 6–12 months, and media campaigns encouraging people to not further delay seeking medical attention, may ameliorate any negative impact of delayed cancer diagnosis. 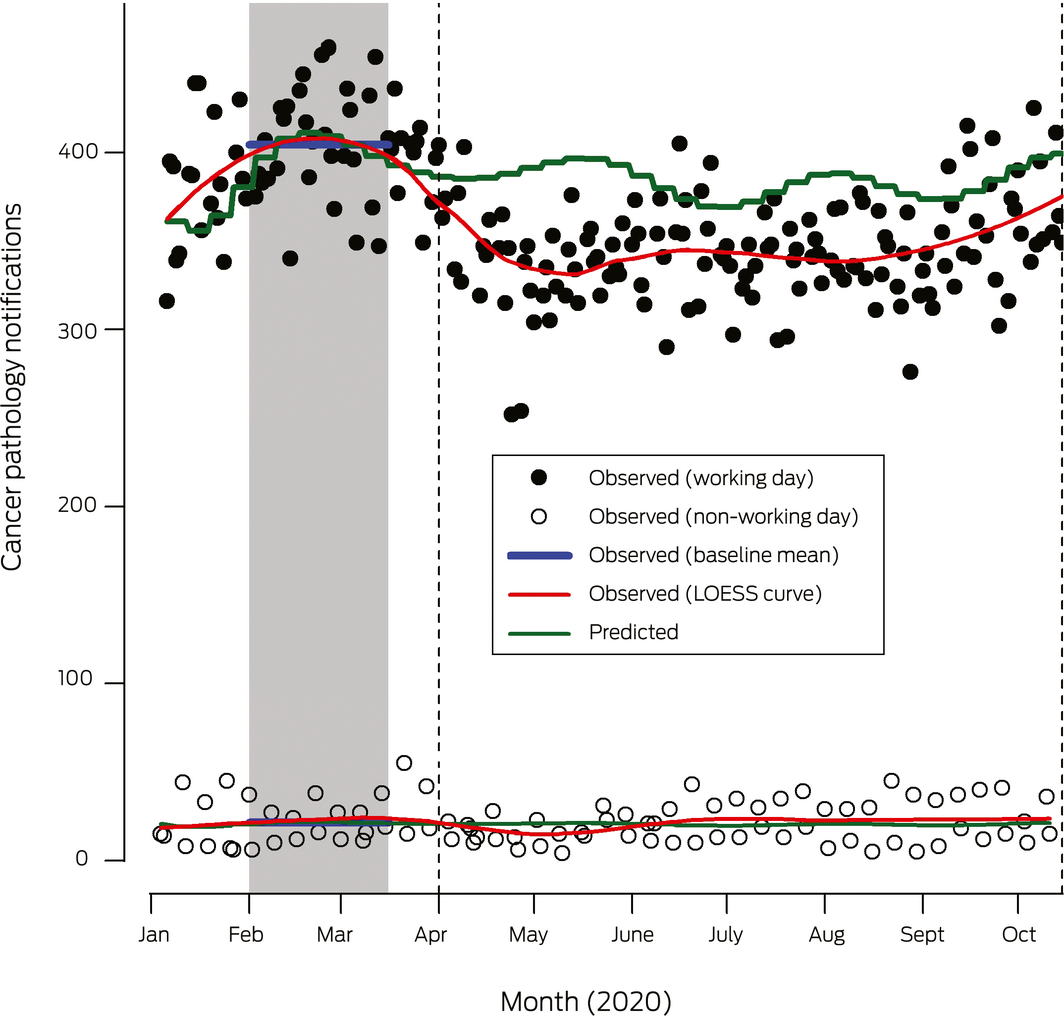 LOESS = locally estimated scatterplot smoothing. The grey area marks the baseline period, the vertical dotted lines the analysis period for predicted notifications. A state of emergency was declared in Victoria on 16 March 2020. Stage 3 movement restrictions were applied from 30 March, eased on 13 May, and re‐applied from 8 July. The state of emergency was renewed on 2 August, together with application of stage 4 restrictions to metropolitan Melbourne until their easing from 19 October. For further details, see the footnote to figure 2 in the online Supporting Information.

The Victorian Cancer Registry (VCR) is funded by the Victorian Department of Health and Human Services. We acknowledge the data and coding support provided by Fiona Kennett, Catherine Shang, Kris Ivanova and the VCR staff. We thank the Victorian COVID‐19 Cancer Taskforce for comments on our analysis.