Mumps outbreak in a rugby league team despite pre‐existing immunity

While mumps outbreaks involving professional rugby league, rugby union, and ice hockey teams have been reported in the media,1,2,3,4,5 there have been few scientific reports.

On 30 January 2018, a general practitioner notified the local Public Health Unit of a mumps outbreak in a National Rugby League team, prompting investigation according to the NSW Public Health Act 2010. Four players and two coaching staff had developed fever and parotitis during 21–24 January (Box). Mumps virus was detected by polymerase chain reaction (PCR) in the buccal or throat swabs of two patients; each had detectable mumps IgG but not IgM (Liaison Mumps IgG and IgM, DiaSorin). In the other four patients, who had fever and parotid swelling, mumps was diagnosed clinically.

The patients were isolated and their travel restricted; the Public Health Unit recommended measles–mumps–rubella (MMR) vaccination of all asymptomatic players and support staff.

The offer of vaccination was extended to the partners of players and staff, and to players from four elite clubs who shared facilities with the team; by 19 February, 178 players and support staff and their partners had been vaccinated.

No new cases were diagnosed after 10 February, and the outbreak was declared ended on 31 March. None of the 12 patients (median age, 25 years; range, 18–39 years) suffered complications. The nine players were from a pool of 42 elite and junior players, an estimated attack rate of 21%.

Significantly, mumps‐specific IgG had been detected in nine patients (all players) at the time of their joining the club; the other three patients (all non‐players) had not previously been tested. Documentation of past vaccination was unavailable.

No players or staff who received MMR vaccine during the outbreak developed mumps. The intimate contact who developed mumps was vaccinated at least 10 days after first exposure, at which point they were probably in the incubation phase of infection.

This was the first mumps outbreak in NSW for many years, and nine of the twelve patients had pre‐existing mumps IgG, which does not appear to be a reliable marker of protective immunity.6 Patients who underwent both serology and PCR testing had detectable IgG but not detectable IgM. This pattern, generally understood to reflect waning immunity following vaccination — that is, pre‐existing mumps‐specific IgG does not prevent infection but its concentration rapidly increases after infection — was also reported for a community outbreak in Western Australia.7 PCR testing is consequently preferable for detecting infection in vaccinated populations, and outbreak control should include vaccination of contacts, even if they have previously received two doses of mumps vaccine.8

Apart from hockey, mumps outbreaks in elite team sports other than the rugby codes have not been reported. Intensive exposure to saliva may result in greater force of infection; tackling and scrums facilitate frequent contact with saliva from fellow players’ faces and on jerseys contaminated by the wiping of mouthguards. Ensuring at registration that players have received two documented lifetime doses of mumps vaccine may be a more effective preventive measure than relying on IgG screening.

All patients and their rugby league club provided written consent for the publication of this report. 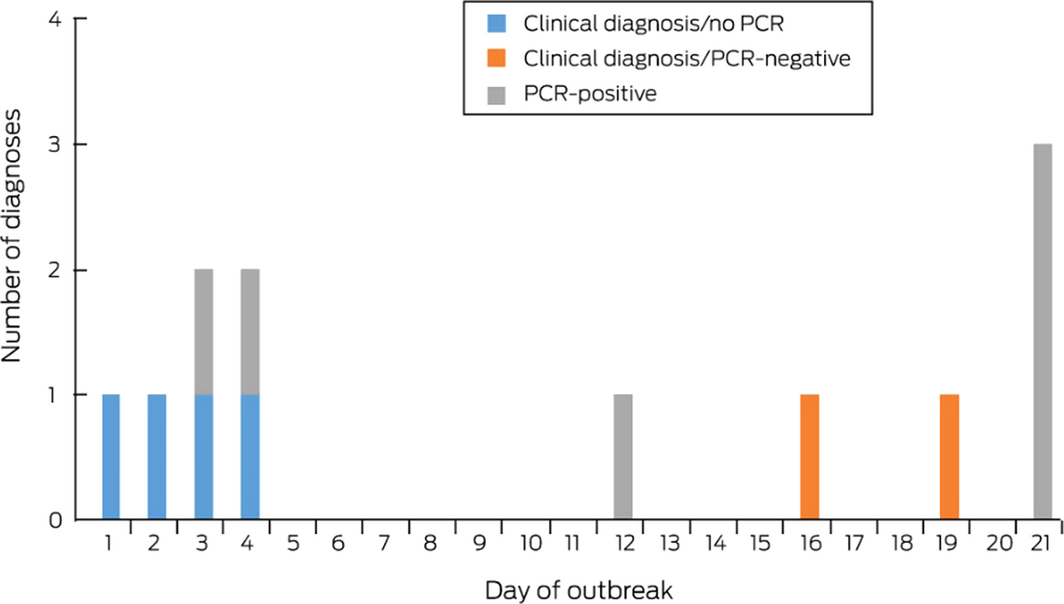 All patients and their rugby league club provided written consent for the publication of this report.

We acknowledge the assistance of the Victorian Infectious Diseases Reference Laboratory, the Peter Doherty Institute for Infection and Immunity, Melbourne.