We investigated the use of intravenous iron by women of reproductive age, analysing dispensing data for a 10% random sample of Australians eligible to receive subsidised medicines under the Pharmaceutical Benefits Scheme (PBS).3 We included data for all women aged 18–44 years with a dispensing claim for intravenous iron during January 2013 to December 2017. Three preparations were available: iron polymaltose and iron sucrose during 2013–2017, and ferric carboxymaltose from June 2014. We calculated the annual number and rate of intravenous iron dispensing claims and iron preparation types by age group, using Australian Bureau of Statistics 2017 population data,4 and estimated overall dispensing rates by extrapolating these numbers to the national level (Supporting Information). The study was approved by the New South Wales Population and Health Services Research Ethics Committee (reference, 2013/11/494) and the federal Department of Human Services External Request Evaluation Committee.

In 2017, intravenous iron was dispensed to one in fifty Australian women of reproductive age, five times the proportion in 2013; in 2017, 90% of these women received ferric carboxymaltose. The optimal rate of intravenous iron treatment is unknown, and there are no comparable overseas data. As possible adverse outcomes include permanent skin staining and the risk (albeit rare) of potentially fatal anaphylaxis,5 intravenous iron should be administered in settings where allergic reactions can be treated promptly, but whether this is generally the case is not known. Intravenous iron therapy for women of reproductive age also has considerable financial implications: based on average PBS prices,6 its total annual cost increased 35‐fold, from $0.75 million in 2013 to $26.9 million in 2017. However, we have probably underestimated the use of intravenous iron therapy, as we included only PBS‐subsidised dispensing, which may not include preparations administered to public hospital inpatients.

The reasons for the rise in the use of intravenous iron are unclear, but may include increased awareness of patient blood management guidelines, the ease of treatment, and the perception that its side effect profile is more favourable than for oral iron therapy. The rapid growth raises concerns about whether it is being employed appropriately and cost‐effectively, given the potential harms and the lack of strong evidence for its value for improving quality of life and reproductive health outcomes. 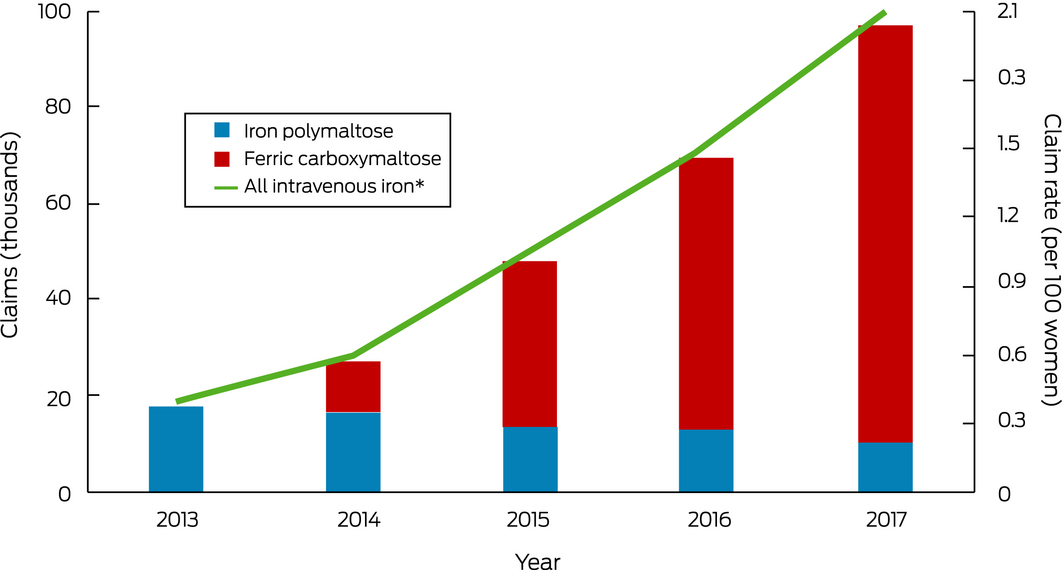 *The small numbers of dispensing claims for iron sucrose are not separately depicted, but were included when calculating the rates of dispensing.

This investigation is funded by a National Health and Medical Research Council (NHMRC) Centre of Research Excellence grant (1060407). Amanda Henry is supported by an NHMRC Early Career Fellowship (APP 1141570).