Meningitis and the military: the remarkable story of the first use of penicillin in Australia (1943)

Medicine in the pre‐antibiotic era offers lessons still relevant today, particularly regarding the prudent use of valuable medications

The handwritten line on an archived envelope stored in a safe in The Children's Hospital at Westmead undercroft — “The first child in Australia to have ‘Penicillin’ therapy” (Box 1) — understates the remarkable story of how an experimental drug was requested, approved and delivered in secrecy during the Second World War for one child. The “Penicillin Papers”, rediscovered in 2018 by the Heritage Committee of The Children's Hospital at Westmead, highlight important questions of ongoing relevance. The story of the fortuitous discovery of penicillin by Alexander Fleming in 1928 has entered popular consciousness. What is less well known is how penicillin, which dramatically changed the course of medicine, came to be given to patients.

The patient: a small boy in wartime Sydney

On 17 June 1943, Peter, almost 7 years old, was admitted to the Royal Alexandra Hospital for Children with fever and increasing drowsiness. During the following 24 hours he reported headache, and a lumbar puncture found turbid cerebrospinal fluid (CSF) with an “uncountable number of leucocytes”, and Streptococcus pneumoniae “type 18” was cultured, a serotype that frequently caused meningitis.1

Sulfonamide drugs were manufactured in Australia in the 1940s, but between 1942 and 1945 stocks were strictly controlled, being reserved almost exclusively for military campaigns in New Guinea.2 Peter, diagnosed with pneumococcal meningitis, was treated with intravenous sulfapyridine for four days, and his fever resolved (Box 2); daily lumbar punctures showed CSF clearing. Treatment switched to oral sulfapyridine, but his fever and vomiting returned. Further intravenous sulfapyridine for one day was followed by extremely painful subcutaneous sulfadiazine infusions for 18 days, then by oral sulfathiazole for four days. Sulfadiazine was obtained from the 118th General Hospital of the United States Army, based in Herne Bay (now Riverwood) and staffed by health professionals from the Johns Hopkins University Hospital in Baltimore. Access to the restricted sulfa drugs was granted by Major McPherson Brown (1906–1989), a professor at the Johns Hopkins, suggesting early involvement of the US Army. By 10 July, however, Peter's CSF was again culture‐positive for S. pneumoniae and the outlook was “grave”.

In 1943, penicillin was a highly experimental drug; clinical trials in US troops in Sicily were underway, and only two scientific articles on its clinical use had been published.3,4 In the US, the unenviable task of rationing the small supply for civilian use fell to Chester Keefer, professor of medicine at Boston University Hospital and chairman of the National Research Council Committee on Chemotherapy. Keefer personally vetted each penicillin request, restricting its use to cases in which all other treatments had failed.5 To better understand its potential and limitations, he collected detailed information on all patients given penicillin.

Fortunately for Peter, his father was Lieutenant Commander Leo Harrison, a Navy surgeon working as a base medical officer in Sydney in 1943. It is likely that his father's connections with US Army doctors helped secure access to the treatment that ultimately saved his life. On the morning of Saturday, 10 July, Sir Alan Newton, chairman of the Medical Equipment Control Committee, cabled Washington to request urgent supply of penicillin for Peter. At 4:30 pm, one million units (600 mg) were despatched from Washington to San Francisco, together with documents stipulating that the penicillin was for research purposes only, and on the understanding that clinical notes would be provided to the National Research Council following treatment. The penicillin was transported by Liberator bomber from San Francisco to Hawaii, and from there via Brisbane to Sydney, arriving at the Royal Alexandra Hospital at midnight on Thursday, 15 July. The first dose was administered to Peter intramuscularly at 12:18 am on 16 July.

Over ten days he received 15 000 units (9 mg) penicillin intramuscularly every four hours, and 10 000 units (6 mg) intrathecally. Today, 5 million units intravenous benzylpenicillin per day would be recommended for a boy of Peter's weight (almost 22 kg). Although Peter's condition improved dramatically, waking from “a stupor” to eat a full breakfast within 48 hours, the dose and treatment duration were inadequate. By 21 July, Peter was again febrile and CSF cultures were positive. Regretting that type‐specific pneumococcal antiserum had not also been requested, Newton had sent a second cable to Washington on 16 July. Rabbit anti‐pneumococcal (type 18) serum arrived and 100 000 units were administered intramuscularly each day from 23 July to 1 August, and oral sulfadiazine from 26 July to 8 August. On 18 September 1943, Peter was discharged home “cured”. Seventy‐five years later, he and his family (Box 3) were interviewed by ABC News reporter Tracy Bowden,6 after his case had been re‐discovered by The Children's Hospital at Westmead Heritage Committee.

There are three references in the medical literature regarding this incredible case. The first was a report published in the Medical Journal of Australia in June 1944 by the treating physicians Donald Vickery and Lindsay Dey.7 The second, a short mention by Newton in a speech to the British Medical Association, was published in July 1944;2 the third, a letter by Dey's son in the MJA in August 1981,8 described his father's recounting of events that “would have made an excellent basis for a film”.

The initial publication7 was delayed by the condition that details of the case be released only to the US National Research Council, effectively a non‐disclosure agreement. Discussions about research secrecy are as old as science itself.9 Proponents of openness argue that it promotes innovation and enhances productivity and efficiency of research. Openness is essential for testing hypotheses and fostering collaboration. Sharing information with the public fulfils moral obligations to provide evidence for shaping policy and to be accountable for the use of public funds. Conversely, research secrecy is often justified as protecting credit and intellectual property, shielding scientists and human research participants from stigmatisation or harassment, and minimising threats to national or international security. The financial interests of biotechnology and pharmaceutical companies further complicate the discussion.

In 1943, arguments for secrecy about experimental penicillin treatments were compounded by the need to protect the limited supplies of the drug. It is pertinent here that the reverse of the envelope containing the Penicillin Papers was marked “Silence saves soldiers” (Box 1). Under the direction of Keefer, the Committee on Chemotherapy charged “accredited investigators” with assessing thousands of requests for penicillin.5 A strict allocation policy was adopted to ensure that decisions were made on clinical grounds. Only patients with severe infections caused by sulfonamide‐resistant, penicillin‐susceptible streptococci, gonococci and staphylococci, should receive penicillin, and only then if a cure could be expected.

Equitable allocation of limited medical resources is a problem that often confronts clinicians and public authorities, particularly in resource‐constrained environments and during wartime, natural disasters,10 or epidemics.11 In 1943, Vickery and Dey did all they could to obtain the experimental drug penicillin for their patient. Wartime priorities in Australia did not include active control of therapeutic substances, although the National Health and Medical Research Council dealt with some medication access questions.12

In the US, the Food and Drug Administration (FDA) first addressed access to investigational drugs for therapeutic purposes in January 1963,13 three months after President Kennedy had approved the amendment of the Food, Drug, and Cosmetic Act that strengthened the FDA mandate to approve medications.14 The process of “expanded access”, the preferred FDA term for compassionate use — that is, of an unlicensed drug or device outside clinical trials — was formalised in 1987 in response to requests for access to investigational anti‐retroviral agents.13 In Australia, the Therapeutic Goods Administration (TGA) was established in 1989 as the national regulatory body; its Special Access Scheme, introduced in response to the 1991 Baume report,15 is the mechanism by which doctors can secure access to unlicensed drugs for selected patients.

The 1962 American drug law amendments, passed in the wake of the thalidomide catastrophe, had the potential to make children “therapeutic orphans”, as many drugs have been tested only in adults.16 Paediatricians today regularly use medications off‐label, but the use of unlicensed drugs is less common and usually restricted to neonatal intensive care.17 Fortunately, the importance of including children in clinical trials is increasingly recognised internationally by research institutions and funding and regulatory agencies.18 Further, the FDA was empowered to provide financial incentives for including children in clinical trials and licensing applications by the 2007 Best Pharmaceuticals for Children and Pediatric Research Equity Acts.19

Sulfonamides, the first effective antimicrobial agents, were available from the mid‐1930s, but drug resistance was widespread by the 1940s. One initial control on penicillin use was the requirement for demonstrated penicillin susceptibility and sulfonamide resistance: an early form of antimicrobial stewardship. As we approach the post‐antibiotic era because of rapidly increasing antimicrobial resistance, institutional, national and international antimicrobial stewardship programs are being implemented to protect the limited therapeutic options available for many infections. Multimodal programs incorporate pharmacokinetic and pharmacodynamic principles to avoid treatment failure through undertreatment, as experienced by Peter in 1943.20 In the future, strengthening these antimicrobial stewardship programs by integrating molecular technologies and high throughput screening methods will be critical.

We also need to rediscover non‐antibiotic approaches to treating infections, including serotherapy21 and bacteriophage therapy.22 Both were widely and successfully employed in the early 20th century, and Peter's ultimate recovery in August 1943 appeared to require type‐specific anti‐pneumococcal serum treatment. However, our reliance on antibiotics over the past century has led to clinical and research neglect of alternative treatment modalities, although interest has revived in recent years, particularly in bacteriophage therapy.22 Greater investment in alternative treatment options is needed, as well as investigation of novel therapeutic and infection prevention strategies.

Box 1 – The “Penicillin Papers”, retrieved from a safe in the basement of The Children's Hospital at Westmead in 2018, include letters and telegrams about the acquisition of penicillin from the United States and its use for treating Peter Harrison 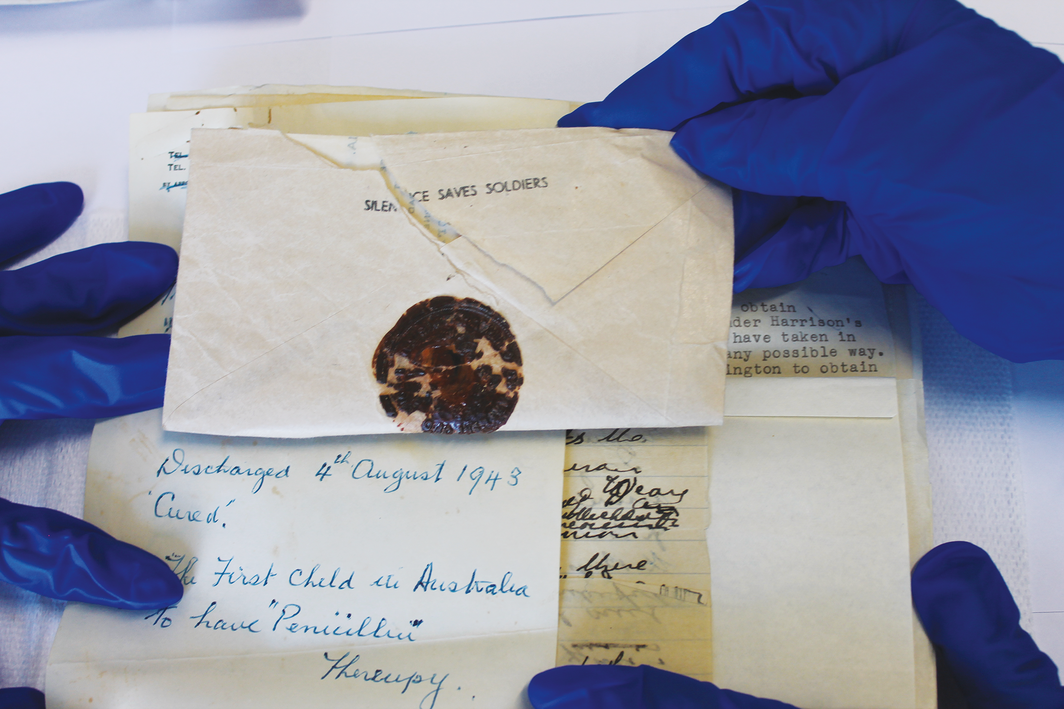 Source: The Penicillin Papers; courtesy of The Children's Hospital at Westmead.

Box 2 – Details from transcribed observation charts for the first patient in Australia to be treated with penicillin, 1943 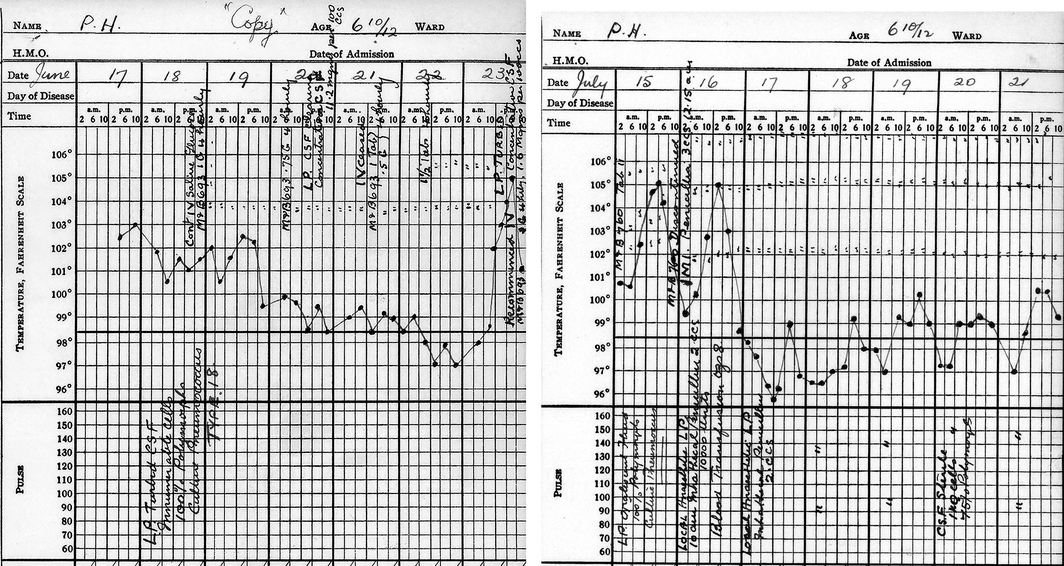 Source: The Penicillin Papers; courtesy of The Children's Hospital at Westmead.

Box 3 – Peter Harrison (right), the first person in Australia to be treated with penicillin, pictured with his family in 2018, together with Bethany Robinson (second from right), the University of Sydney student who rediscovered the “Penicillin Papers” 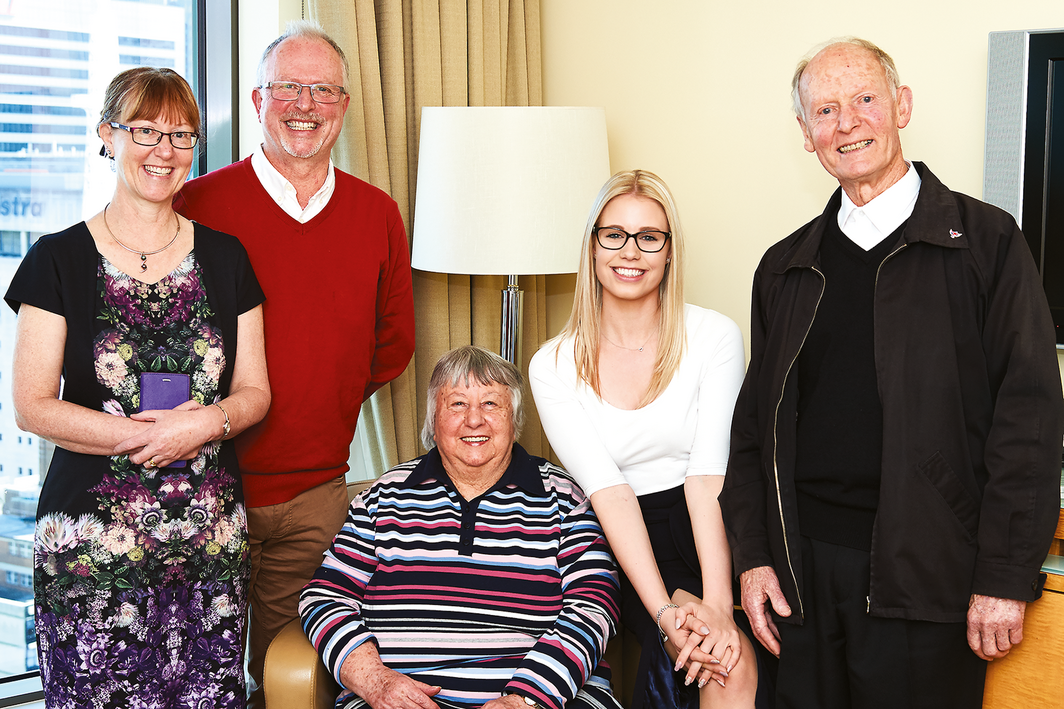 Philip Britton is supported by a National Health and Medical Research Council Early Career Fellowship (GNT1145817). We thank Bethany Robinson, University of Sydney graduate, for her contributions, and members of The Children's Hospital at Westmead Heritage Committee for providing historical information used in the preparation of the manuscript.