Objectives: To estimate the proportion of infants introduced to peanut and other common food allergens by 12 months of age; to collect information about parent‐reported reactions to food.

Main outcome measures: Proportions of infants who had eaten peanut and other common food allergens; proportions with parent‐reported reactions to food.

The known: Guidelines for infant feeding and allergy prevention recommend that common food allergens be introduced by 12 months of age.

The implications: SmartStartAllergy is a novel tool for promoting and monitoring community uptake of the ASCIA guidelines for infant feeding and allergy prevention and parent‐reported food allergy during the first year of life.

The prevalence of early childhood food allergy in Australia is among the highest in the world.1 To reduce the incidence of food allergies, the Australasian Society of Clinical Immunology and Allergy (ASCIA) recently revised their guidelines for infant feeding and allergy prevention, recommending that common food allergens, including peanut and egg, be introduced during the first year of life.2 These guidelines, underpinned by evidence from randomised controlled trials,3,4 contrast with earlier recommendations, including advice by the National Health and Medical Research Council,5 to avoid some allergenic foods during early childhood.

As introducing peanut before 12 months of age significantly reduces the risk of peanut allergy,3 early introduction should be encouraged and monitored. The most recently published data on the timing of allergenic solid food introduction and food allergy for a large population‐based cohort of infants were for 12‐month‐old children in Melbourne and surrounds born during 2007–2011; consistent with advice during the 1990s and early 2000s to avoid feeding young children allergenic foods,6 about 70% of infants in this study had not eaten peanut.7

It has been hypothesised that routinely introducing common food allergens during the first year of life could reduce food allergy rates in Australia.8 To evaluate community adoption of the ASCIA guidelines and to actively monitor changes in the incidence of allergic reactions in infants, accurate data are needed.

We therefore developed SmartStartAllergy as an active surveillance tool for promoting the ASCIA guidelines and monitoring parent‐reported allergic reactions to food during the first year of life. In this article we describe a novel approach to assessing the introduction of peanut and other common food allergens and the rates of parent‐reported food‐related allergic reactions in 12‐month‐old infants.

SmartStartAllergy is a smartphone application that incorporates the experience and infrastructure of SmartVax (www.smartvax.com.au), a program that uses short message service (SMS) and smartphone technology to actively monitor vaccine safety in real time.9 In our pilot study, we employed SmartStartAllergy, integrated with general practice management software, for two purposes:

We specifically focused on peanut as a potentially allergenic food type because the risk of peanut‐related allergic reactions is of substantial concern for some parents.

The 282 general practices currently employing SmartVax (of about 7000 general practices in Australia) were invited to participate in our SmartStartAllergy study. Practices were progressively enrolled from September 2018; by May 2019, 69 general practices (24%) were participating: 30 of 81 in Western Australia, 16 of 65 in New South Wales, 12 of 68 in Queensland, three of 28 in Victoria, three of 12 in South Australia, three of 11 in the Australian Capital Territory, one of five in the Northern Territory, and one of 12 in Tasmania. Of the 69 participating practices, 43 were in major cities, 21 in inner regional areas, three in outer regional areas, and two in remote locations, according to the Accessibility/Remoteness Index of Australia (ARIA) classification.10 The Socio‐Economic Indexes for Areas (SEIFA) Index of Relative Socio‐Economic Advantage and Disadvantage (IRSAD)11 was determined for each practice postcode; 34 were in the lower five deciles, 35 in the higher five deciles. Parents of 12‐month‐old infants who attended the participating general practices were recruited directly via the SmartStartAllergy app. When their child reached 12 months of age, parents received a series of up to three automatically generated SMS messages; they could opt out of further communications by replying “STOP” to any message.

SmartStartAllergy comprises two integrated components for collecting data about food introduction and allergic reactions. In the first component, parents receive an SMS message when their child reached 12 months of age in which they are asked, “Has [child's name] eaten foods with peanut?”; after responding “yes” or “no”, they receive a second SMS message with the question, “Has [child's name] ever had an allergic reaction to any food?”

The second component is a questionnaire accessed via a link in a third SMS message sent to participants who responded to the first two SMS questions. This questionnaire requests additional information about foods the child has eaten, foods that have caused allergic reactions, and risk factors for food allergy (including personal history of eczema and family history of allergic disease12,13) (Supporting Information, figure 1).

The first section of the questionnaire asks about parent‐reported allergies to individual foods with the question, “Which food(s) have caused an allergic reaction?”, followed by a list of common food allergens (responses: yes or no).

A second, dynamic section of the questionnaire (ie, presented only for foods for which the response to the first question was “yes”) collects details about the timing and nature of symptoms associated with the specific food. Reactions were deemed suggestive of IgE‐mediated reaction (allergy) if symptoms commenced within two hours of consumption, but instances of isolated perioral rash were excluded.

SMS and questionnaire responses received from parents of 12‐month‐old infants between 21 September 2018 and 3 May 2019 were included in our analysis. SMS and questionnaire data are collated by SmartStartAllergy, installed locally at each general practice. The application sends the three SMS messages and receives the SMS and questionnaire responses. De‐identified data is uploaded daily to a secure central SmartStartAllergy server; data that identify participants are not accessible outside the general practice of the parent. The infant's general practitioner is automatically notified of major allergic reactions via their practice management software inbox, facilitating recall, follow‐up, or referral of the child for specialist advice. We extracted de‐identified data from the central SmartStartAllergy server for analysis.

Statistical analysis was performed in MedCalc 16.4.3 (https://www.medcalc.org). All data, including data from partially completed questionnaires, were included in analyses. Descriptive statistics are presented with 95% confidence intervals (CIs) calculated with the Clopper–Pearson exact method. Proportions were compared in χ2 tests.

This investigation was approved by the University of Western Australia Human Research Ethics Committee (reference, RA/4/20/4580).

Introduction of peanut and other food allergens

In response to the questionnaire, 767 of 857 parents (89.5%; 95% CI, 87.3–91.4%) indicated that their infants had eaten peanut by 12 months of age. This proportion was significantly greater than for the SMS responses (P = 0.017). The proportions of infants exposed to other common food allergens, as reported by questionnaire respondents, is summarised in Box 1.

Help was sought from a health professional at the time of a food‐related reaction in 102 cases (42% of respondents to this question; Supporting Information, figure 3). Advice was sought from GPs (45 of 102, 44%), emergency departments (22 cases), other health professionals (16 cases), Health Direct (https://www.healthdirect.gov.au) or another phone advice line (eight cases), ambulance services (seven cases), or pharmacists (four cases).

We found that most parents (86%) reported that their infants had eaten peanut before 12 months of age, consistent with current ASCIA guidelines.2 This proportion is much higher than the estimate of 30.2% determined by an Australian population survey undertaken between 2009 and 2011,7 and follows major efforts to promote the revised ASCIA guidelines in both the medical and general media.

As both our investigation and the HealthNuts study provide population‐based estimates of infant feeding practices and the proportions of infants with food allergy, comparing their estimates over time would be appropriate.

SmartStartAllergy and SmartVax were both initiated in WA, and general practices in this state were consequently over‐represented in our study. We had insufficient data to examine whether this bias affects the generalisability of our findings, but the proportions of infants who had been introduced to peanut in WA, NSW and Queensland were similar. We anticipate that participation in SmartStartAllergy in other jurisdictions will increase, overcoming this source of bias in future.

SmartStartAllergy data could help guide health promotion interventions by facilitating single practice, regional, or state‐based comparisons with national trends in the introduction of common food allergens and the incidence of food allergy, supporting more targeted public health programs. SmartStartAllergy can provide health promotion messages to parents of infants yet to be exposed to peanut, such as a link to information about infant feeding and allergy prevention on the National Allergy Strategy “Nip Allergies in the Bub” website (https://preventallergies.org.au). We are now evaluating the utility of SmartStartAllergy as a research and health promotion tool, focusing on infant feeding at 6 and 9 months of age and food‐related allergic reactions during the first year of life.

At the individual level, SmartStartAllergy could prompt GPs to discuss common food allergens with families of infants yet to be introduced to these foods. Consistent with previous reports,7 we found that delayed introduction of peanut was more likely when there was a family history of food allergy. While we did not examine reasons for delaying the introduction of peanut, parents may be apprehensive if a sibling has a history of allergy.16

The response rates in our study and our inability to determine whether relevant characteristics of responders and non‐responders differed significantly limit the interpretation of our findings. More than half the initial participants answered both SMS questions, and about one‐quarter fully completed the questionnaire. It is possible that parents with personal experience of allergy were more motivated to participate and complete the questionnaire; a significantly greater proportion of participants who reported an allergic reaction in response to the SMS questions subsequently completed the questionnaire. We relied on parents’ recall of foods introduced and allergic reactions that may have occurred several months before receiving the first SMS question.

The HealthNuts cohort was recruited from local government immunisation clinics in metropolitan Melbourne (45.6% of infants were immunised at such clinics in Victoria in 2008), and included participants from postcodes of higher mean socio‐economic status and with mothers of a higher median age than the general Victorian population.18 The limited demographic data we have for our respondents prevented us from comparing our participants with either the HealthNuts cohort or the overall Australian infant population.

By developing SmartStartAllergy and engaging with GPs, we have provided data that suggest a shift in infant feeding practices in Australia with respect to introducing common food allergens. We found that most infants now receive peanut during their first year of life, consistent with ASCIA guidelines. 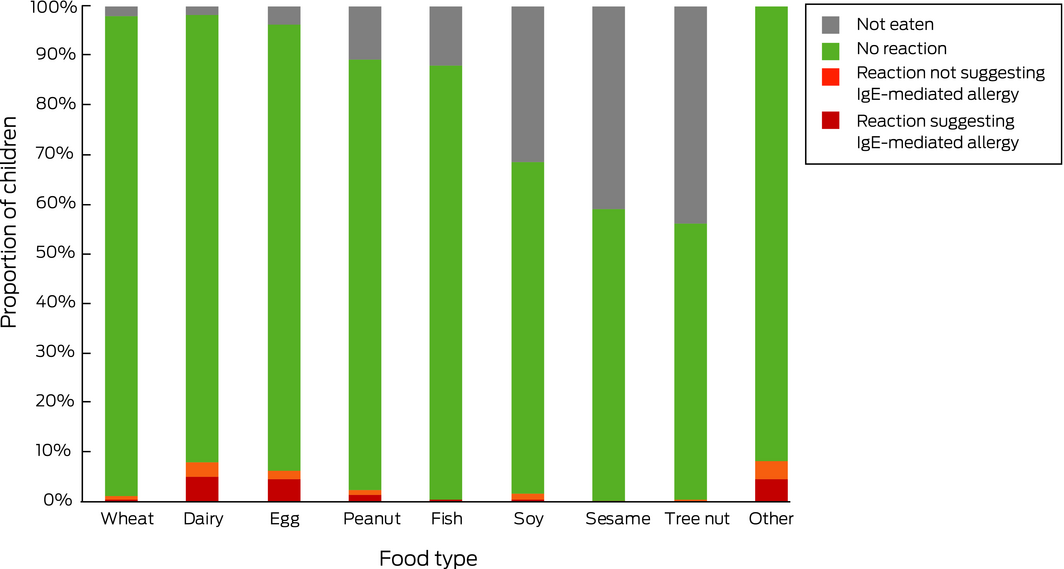 The development of the SmartStartAllergy program and this investigation were supported by the Perth Children's Hospital Foundation (PCHF) and the Australian Department of Health. The funding sources had no role in the study design, data collection, analysis or interpretation, reporting, or publication. We acknowledge the in‐kind support (technology and experience) provided by the SmartVax team in developing and implementing SmartStartAllergy. We also acknowledge Preeti Joshi and the National Allergy Strategy Food Allergy Prevention Project Working Group, Debbie Palmer and Susan Prescott (co‐investigators in the PCHF SmartStart project), and the staff at the participating general practices.