Design, setting and participants: Between 11 November 2011 and 10 June 2013, adult patients and parents of paediatric patients receiving routine vaccinations in general practice were sent an SMS by SmartVax enquiring if they had experienced any AEFI and requesting a reply by SMS. Attempts were made to telephone patients who did not reply by SMS.

Conclusions: More than 70% of patients responded by SMS to an SMS query about whether they had any vaccine reactions, with the data received in near real-time. Active surveillance of AEFI using SMS has the capacity to complement existing passive reporting systems, potentially permitting more rapid identification of emerging safety signals.

After the surge in adverse events following immunisation (AEFI) among children receiving seasonal influenza vaccine in April 2010, the limitations of existing passive vaccine safety surveillance in Australia have been widely acknowledged.1-3

In an effort to remedy the inherent constraints of passive AEFI reporting, the Illawarra Medical Centre (IMC) in Perth, Western Australia, began exploring opportunities to implement active surveillance of vaccine safety. In 2011, IMC collaborated with a software developer (Datavation) to create a tool that extracts vaccination data from the clinic’s existing, commercially available practice management software. This new tool, called SmartVax, can send a short message service (SMS) text message to patients who have been vaccinated, then automatically collate any replies received via SMS.

In this study, we aimed to assess SmartVax’s performance in terms of response rates and timeliness.

IMC administers more than 2000 vaccinations annually and documents each of these events in the patient’s electronic medical record using the standard functionality of Best Practice (Best Practice Software), the practice management software. Patients and parents of paediatric patients (considered as synonymous for this report) are routinely requested to provide a mobile telephone number and are informed at the time of vaccination that they may subsequently receive an SMS enquiring about any reactions.

Between 11 November 2011 and 10 June 2013, SmartVax was used to send an SMS to vaccinated patients who had provided a mobile telephone number. The SMS was typically sent once a week to patients vaccinated within the preceding 7 days. Two versions of the outgoing SMS were created: one tailored to parents of children aged ≤ 12 years who had received scheduled childhood vaccinations; and one for adults aged ≥ 18 years who had received influenza vaccine. The SMS asked patients if there were any reactions to the vaccination and requested a “Yes” or “No” reply by SMS.

SMS replies were automatically written back into the SmartVax tool, linked to the patients’ vaccination data and collated in real-time. Routinely, 24 hours were allowed for receipt of a response, after which clinic staff telephoned those who indicated they had experienced a reaction, as well as those who had not responded. During the phone call, a survey was administered to ascertain the nature, duration and severity of any reaction reported. The response rate was defined as the proportion of patients who responded to the clinic’s SMS with a reply SMS. Patients who did not have a mobile telephone, provided an incorrect or disconnected mobile number, or did not answer at least two subsequent attempted phone calls were classified as uncontactable.

As some individuals contributed more than one vaccination visit to the analysis, cluster analytical techniques were used to calculate proportions and confidence intervals. We also performed a secondary analysis using only information from each individual’s first vaccination visit to assess the impact of including repeat observations for some patients. Data were analysed using SAS 9.3 (SAS Institute Inc).

This activity was approved by the University of Western Australia Human Research Ethics Office in December 2010 (RA/4/1/4477).

The analysis restricted to data from the first vaccination visit for each individual produced very similar results: the response rate remained 70% or greater for both paediatric and adult patients, and more than 80% of SMS responses were received within 2 hours.

In Australia and other countries, post-licensure monitoring of vaccine safety relies largely on passive surveillance. The constraints of passive AEFI reporting systems are well recognised and include underreporting, biased reporting and the inability to establish rates.3-5 These limitations may result in delayed detection of potential safety signals.6

The SmartVax tool permits active monitoring of vaccine safety by extracting clinical data from practice management software and using SMS technology to query vaccinated patients. Our evaluation identified several potential advantages with this approach. First, the response rate to the outgoing SMS was ≥ 70% for both paediatric and adult patients. Second, the information received was very timely, with more than 80% of all SMS replies received within 2 hours after the outgoing message was sent. Such timeliness could be valuable when an urgent investigation into potential vaccine safety issues is necessary, and it would permit ongoing safety monitoring in near real-time. Last, we found that the proportion of patients who reported an adverse reaction was similar between those who replied by SMS and those who did not but were subsequently contacted by telephone. This finding suggests that, during routine monitoring of vaccine safety, it may not be necessary to telephone people who do not respond to the SMS, substantially reducing the staff resources required to maintain the system.

We know of one other study that investigated the use of SMS text messages to monitor vaccine safety. In 2012, researchers in Cambodia testing an open-source SMS-based tool to monitor adverse events among 184 adult patients receiving vaccinations found a response rate (72%) similar to ours.7 This suggests SMS may be a viable method of conducting AEFI surveillance in a variety of settings worldwide.8

One of the strengths of the SmartVax system is that it seamlessly interfaces with the existing practice management software in our practice, reducing the amount of effort required to identify vaccinated patients for inclusion in active surveillance. The medical practice software in use at IMC is popular in Australia,9 and it is likely that SmartVax could be modified to work with other commonly used software packages. Also, because the SMS replies are linked to data extracted from the patient record, this system enables the responses to be assessed in the context of the type and number of vaccines administered, with ready access to brand and batch number. Another strength is that when more detailed information for suspected vaccine reactions is obtained through subsequent telephone interviews, this information can be directly entered into SmartVax through a data entry screen and is immediately available for aggregation and review.

The major limitation of the system, as currently configured, is that it requires clinic personnel to telephone patients who respond affirmatively to experiencing suspected AEFI, to ascertain the nature and severity of the alleged reaction. In our experience, the process of personally contacting the small subset of respondents with suspected AEFI is not particularly onerous and is certainly more efficient than attempting to interview all vaccinated patients as part of an active AEFI surveillance system. Even so, this approach necessarily offsets some of the benefits of using an otherwise very timely SMS-based reporting system. A possible solution to gathering additional clinical information on patients responding affirmatively to the initial SMS, while minimising the staff resources involved, might be to send the patient a series of sequential text message questions or a link to a web-based survey; we are exploring these options.

The ability of an AEFI monitoring system to detect potential safety signals early is predicated, in part, on having large numbers of patients included in the surveillance program. By developing an AEFI monitoring system that works with a widely used practice management software application, and that could likely be modified to work with others, there is potential to expand the number of participating practices to achieve a large representative sentinel population. If this type of AEFI surveillance were to be implemented in other practices throughout Australia, de-identified results could be aggregated so that meaningful sample sizes for individual vaccines could be attained in a timely manner. Such a system could make a valuable contribution to assuring vaccine safety when new vaccine formulations are introduced, including any future rollout of pandemic influenza vaccines.

In summary, the experiences with seasonal influenza vaccine in Australia in 2010 highlight the limitations of relying solely on passive surveillance for early detection of vaccine safety problems.3 Active postmarketing surveillance of vaccine safety using SMS technology has the capacity to complement passive reporting systems, potentially enabling more rapid identification of emerging safety signals. Further development and evaluation of systems like SmartVax are warranted. 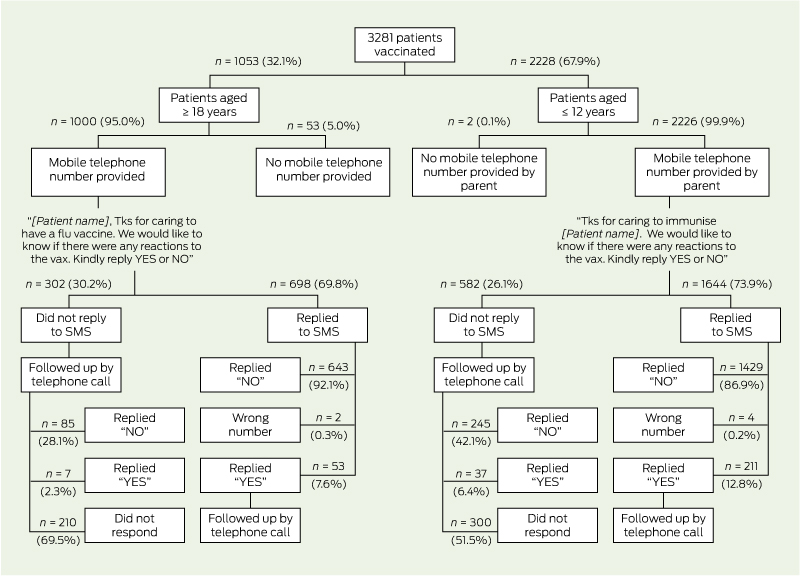 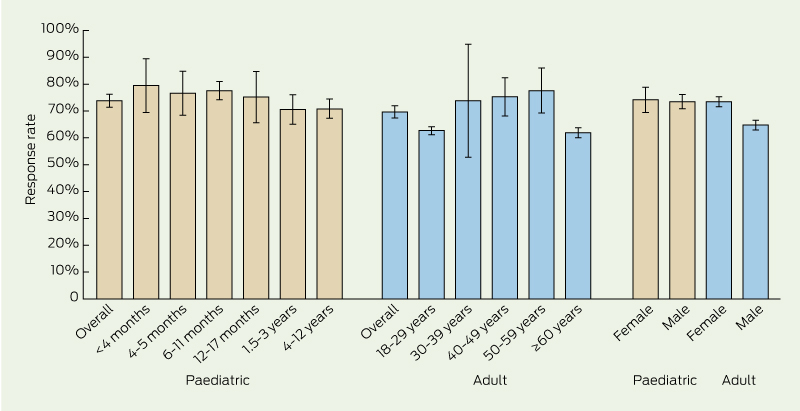 Alan Leeb and Ian Peters are co-creators of the prototypic software system described here. At present, the system is not under copyright and is not commercially available. However, if in the future this software were to be licensed and sold commercially, they might derive financial benefit.