Objectives: To assess the risks of stroke and cardiovascular mortality for Aboriginal and non‐Aboriginal Australians with atrial fibrillation.

Main outcome measures: Stroke incidence rates and mortality after hospitalisation for atrial fibrillation, and 10‐year risks of stroke and of cardiovascular and all‐cause mortality.

The known: Data on the rate and risk of stroke and cardiovascular mortality in Aboriginal Australians with atrial fibrillation are limited.

The implications: Data on the use of oral anticoagulants and better management of cardiovascular risk factors are vital for reducing the stroke burden in Aboriginal patients with atrial fibrillation.

The global burden of atrial fibrillation (AF), a common cardiac condition, is growing.1 Because the prevalence of AF increases with age, population ageing has contributed to the increase in burden in many developed countries. Its prevalence is higher among indigenous than non‐indigenous people in several countries;2 the reported prevalence in central Australian Indigenous communities is 2.5%.3 For Aboriginal Australians under 55 years of age, the incidence rate of AF is four to six times that for non‐Aboriginal people of the same age.4

Complex social and historical factors contribute to health disparities between Aboriginal people and other Australians. Earlier onset of cardiovascular disease5 and higher levels of chronic diseases and health risk factors contribute to these differences,6 as does the greater risk of stroke.7 Stroke and cardiovascular mortality are frequent complications of AF,8 but data on the risks in Aboriginal patients with AF are limited. Oral anticoagulant therapy may be underprescribed for these patients, particularly for those at high risk of stroke.9

The population of Western Australia in 2013 was about 2.5 million, of whom nearly 4% identified as Aboriginal people, compared with 3% of all Australians who identified as Aboriginal or Torres Strait Islander Australians.10,11 In WA, 40% of Aboriginal people reside in remote or very remote areas, but only 6% of non‐Aboriginal people.12 In our retrospective cohort study we analysed linked health data (using probabilistic matching) from the WA Hospital Morbidity Data Collection and the WA Deaths Registry. The study dataset included all hospitalisations for AF in WA during 1990–2012, and all linked hospital and death records for the relevant patients. Selected patient demographic details, Aboriginal status, principal and twenty additional discharge diagnosis fields, inpatient procedures, date of death, and underlying and multiple‐coded cause of death were included in our analyses.

We identified all hospitalisations in WA between 1 January 2000 and 31 December 2012 for which AF (International Classification of Diseases, tenth revision, Australian modification [ICD‐10‐AM] code I48) was recorded in the principal or additional discharge diagnosis fields. The diagnosis of AF had previously been validated in a small randomly selected sample, with a high positive predictive value based upon medical chart review.13 The first AF admission during the study period (index event) for patients aged 20–84 years who survived more than 28 days from admission was included in the analysis. We excluded 1882 patients who had mechanical heart valves (ICD codes: Supporting Information, table 1).

The outcome event date was defined as the date of hospital admission or date of death. Follow‐up data for all patients, including coded cause of death, were available until 30 November 2013. Follow‐up was censored at the date of the outcome event, 10 years after the index AF event, or 30 November 2013, whichever was earliest. Patients were followed up for between 28 days and 10 years from their index AF admission date.

The cohort was stratified by Aboriginal status and age group (20–59, 60–84 years). We did not include patients over 84 years of age because of their very low number. Patient characteristics were analysed by univariate logistic regression, χ2 tests, and Wilcoxon signed rank tests for binary, categorical, and continuous variables respectively.

Incidence rates were calculated for all outcomes, presented as number per 1000 person‐years with 95% confidence intervals (CIs). Unadjusted risks of all stroke, cardiovascular disease and all‐cause mortality were estimated by Kaplan–Meier survival analysis. Hazard ratios (with 95% CIs) comparing rates for Aboriginal and non‐Aboriginal patients were calculated in Cox proportional hazard models. We undertook a multivariable analysis with progressive adjustment for age (continuous) and sex, remoteness and health insurance status, principal diagnosis of AF, CHA2DS2‐VASc, history of valvular heart disease, chronic kidney disease or chronic obstructive pulmonary disease, and admission year. Assumptions of the Cox proportional hazard models were checked by assessing Schoenfeld and scaled Schoenfeld residuals; no violations were found. Because of the low event numbers, models for haemorrhagic stroke are not presented separately. P < 0.05 was deemed statistically significant. All analyses were undertaken in Stata/MP 15.1.

Progressive adjustment of the Cox models indicated that adjusting for age and sex, AF as principal diagnosis, and CHA2DS2‐VASc score had the greatest impact on aHRs for stroke rates and cardiovascular mortality (Supporting Information, table 2). Adjusting for valvular heart disease, chronic kidney disease, and chronic obstructive pulmonary disease had smaller effects on stroke hazard ratios for either age group.

Our whole population cohort study, including more than 55 000 people hospitalised with AF, found marked differences in the risks of stroke and cardiovascular death for Aboriginal and non‐Aboriginal Australians, especially among patients under 60 years of age. The relative risks of fatal and haemorrhagic stroke were particularly high for Aboriginal patients in this age group. These differences in risk were largely related to the higher prevalence of prior cardiovascular disease and vascular risk factors among Aboriginal patients under 60.

AF is an independent risk factor for ischaemic stroke.8 While the risk of stroke after AF is higher for many indigenous peoples,2 comparative data on stroke incidence are limited. The risk of stroke (based on CHA2DS2‐VASc scores) is reported to be twice as high in New Zealand for Māori and Pacific patients under 65 with AF18 as for non‐Māori/non‐Pacific patients. We found that the incidence of stroke (and its subtypes) was higher among Aboriginal than non‐Aboriginal patients with AF, particularly among patients under 60 years of age. The higher incidence of AF in Aboriginal than in non‐Aboriginal people4 may contribute to the higher incidence of stroke in Aboriginal Australians.7,19

The general prognosis for indigenous people with AF is poor, although long term follow‐up data are limited. All‐cause mortality at one year among indigenous patients in WA and Canada was 1.5–2 times as high as for non‐indigenous patients.4,20 We found that the difference in all‐cause mortality after AF hospitalisation increases over 10 years, and that most of the difference is associated with cardiovascular causes of death, which in our study accounted for about three‐quarters of the mortality burden, consistent with the findings of other population‐based studies of patients with AF.8,21

Reasons for the differences in risk

Oral anticoagulants reduce the risk of ischaemic stroke and all‐cause mortality despite the increased risk of major bleeding,25 but data on their use by Aboriginal Australians are limited. One study found that more than 70% of Aboriginal patients with AF and CHA2DS2‐VASc scores of 2 or more were not receiving oral anticoagulants.9 Warfarin was the main oral anticoagulant available during our study period, but adequate monitoring of patients’ international normalised ratio (INR) in rural and remote communities is difficult because of remoteness, limitations in service availability and culturally appropriate referral pathways,26 and family caring responsibilities. Recent Australian guidelines recommend novel oral anticoagulants (NOACs) for Aboriginal people with non‐valvular AF because they overcome many of the logistic and clinical barriers associated with warfarin.27 The higher incidence of haemorrhagic stroke in Aboriginal adults under 60 also indicates that NOACs may be safer options than warfarin, although factors such as poor blood pressure control must be taken into account.

We were unable to identify paroxysmal, persistent or chronic AF, or atrial flutter, as ICD coding did not differentiate these subtypes during our study period. However, current clinical guidelines recommend treatment based on stroke risk factors rather than AF type.27 Our upper age limit of 84 years (fewer than 0.05% of Aboriginal patients were over 84 years of age) may have led to our underestimating the absolute risk of stroke, but our age group‐based analyses ensured that the reported relative risks of stroke are valid. Some misclassification of ischaemic and haemorrhagic stroke is probable, as we relied on ICD codes for stroke type. The small number of haemorrhagic strokes precluded robust conclusions about this stroke type.

Medications data were not available in the analysed dataset, so we could not assess the effect of oral anticoagulant therapy on stroke incidence. CHA2DS2‐VASc scores have not been specifically validated in an Aboriginal Australian population.

The incidence of stroke and cardiovascular mortality are higher among Aboriginal than non‐Aboriginal people with AF, and the difference increases with time from hospitalisation, despite evidence of the effectiveness of oral anticoagulants for reducing thrombo‐embolic stroke risk. The availability of NOACs provides an opportunity for reducing the risk of stroke for Aboriginal people with AF. Increased screening for cardiovascular disease risk factors and AF in primary care, incorporating new models of care that take cultural factors into account, could improve primary and secondary prevention for Aboriginal people.

Box 1 – Characteristics of patients admitted to Western Australian hospitals with a diagnosis of atrial fibrillation during 2000–2012, by age group and Aboriginal status

Box 2 – Incidence rates of stroke and mortality during the ten years following hospitalisation for atrial fibrillation, by Aboriginal status and age group

Box 3 – Kaplan–Meier survival curves for all stroke and cardiovascular mortality in patients hospitalised with atrial fibrillation, by Aboriginal status and age group* 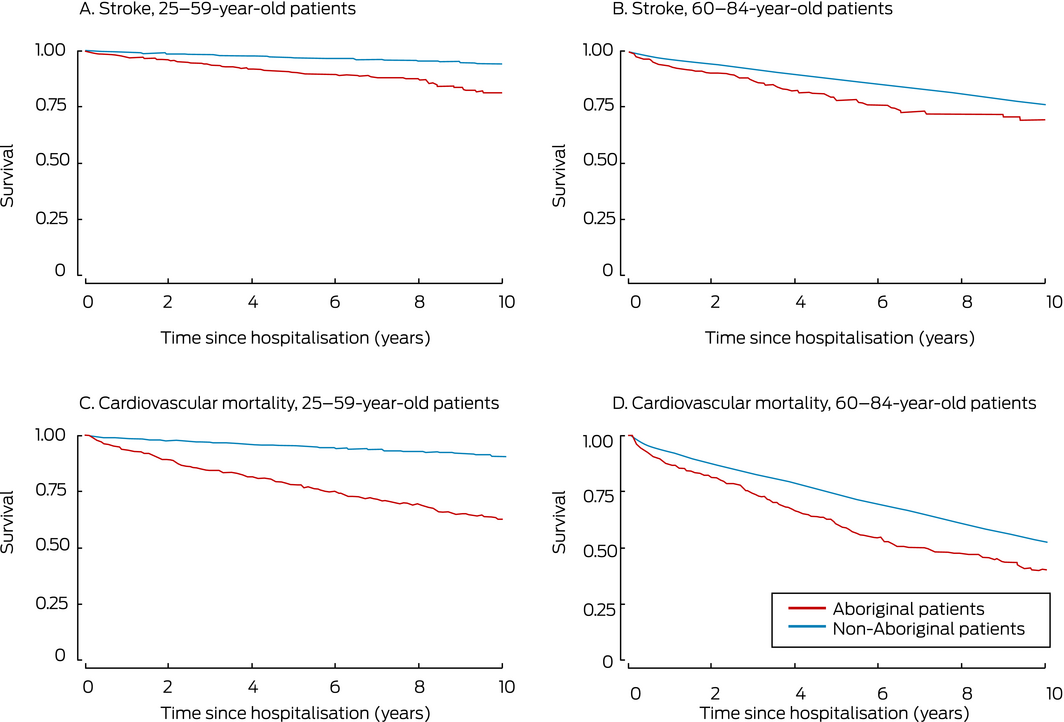 Our investigation was supported by a National Health and Medical Research Council (NHMRC) grant (1031057). Lee Nedkoff is supported by an NHMRC Early Career Fellowship, Judith Katzenellenbogen by a Heart Foundation Future Leader Fellowship. Data were provided by the Western Australian Data Linkage Branch, the WA Department of Health Inpatient Data Collections and Registrar General, state and territory registries of births, deaths and marriages, state and territory coroners, and the National Coronial Information System.