Objectives: To describe changes in childhood cancer incidence in Australia, 1983–2015, and to estimate projected incidence to 2035.

Design, setting: Population‐based study; analysis of Australian Childhood Cancer Registry data for the 20 547 children under 15 years of age diagnosed with cancer in Australia between 1983 and 2015.

Main outcome measures: Incidence rate changes during 1983–2015 were assessed by joinpoint regression, with rates age‐standardised to the 2001 Australian standard population. Incidence projections to 2035 were estimated by age‐period‐cohort modelling.

Conclusions: The incidence rates of several childhood cancer types steadily increased during 1983–2015. Although the reasons for these rises are largely unknown, our findings provide a foundation for health service planning for meeting the needs of children who will be diagnosed with cancer until 2035.

The known: Childhood cancer incidence rates were generally stable in Australia between 1994 and 2006.

The new: The overall incidence rate of childhood cancer increased by 1.2% per year between 2005 and 2015, and is expected to rise a further 7% over the next 20 years.

The implications: The causes of childhood cancers must be understood before interventions to reduce their incidence can be developed. Specialist health services for diagnosing and treating children with cancer need to be prepared to meet the expected growth in the number of cases.

The aetiology, biology, and clinical classification of childhood cancers differ from those of cancers diagnosed in adults.1,2 Childhood cancers are nevertheless usually either omitted from routine cancer statistics or included in those for the much more numerous adult cancers, obscuring implications specific to children. The Australian Institute of Health and Welfare has published cancer incidence projections for all age groups combined,3 but not separately for children.

Examining epidemiological patterns, including differences in incidence by country or over time, can provide important insights into the aetiology of childhood cancer by suggesting links with genetic or environmental factors.4 This is of particular importance for childhood cancers, given that their causes are typically unclear.5 Incidence projections can also provide insights into the future burden of cancer for guiding policy and health professionals responsible for ensuring that future demand for health services are met.

Previously published cancer incidence estimates and trends for children in Australia, for the period 1983–2006, were based on data from the Australian Childhood Cancer Registry (ACCR).6 The aims of our study were to examine whether the reported trends in incidence rates have persisted, and to specifically project — for the first time in Australia — the incidence of childhood cancers.

The ACCR maintains a database of all cancers diagnosed in Australia in children under 15 years of age. Australian state and territory population‐based cancer registries annually provide information to the ACCR on children with cancer registered in their jurisdiction. At the time of our study, complete national information was available for the period 1983–2015.

Childhood cancers are categorised into 12 diagnostic groups and 47 subgroups according to the International Classification of Childhood Cancers, 3rd edition (ICCC‐3).1 Intracranial and intraspinal tumours of benign or uncertain behaviour are included in the ICCC‐3 because their clinical symptoms and prognosis are similar to those of malignant tumours. As data on these tumours have historically not been collected consistently by all Australian state and territory cancer registries, cases of intracranial/intraspinal tumours of benign or uncertain behaviour were regularly ascertained directly in hospital records during site visits by the ACCR data manager.

Estimated resident population data by sex, age group, and year were obtained from the Australian Bureau of Statistics7 for incidence rate calculations, as were data on population forecasts.8 Intermediate population projections (series B), reflecting current trends in fertility, life expectancy at birth, and net migration from overseas,8 were used for our major analyses.

Incidence rates were calculated for the most recent five years of data (2011–2015) for all childhood cancers combined, and also stratified by sex, age group, diagnostic group, and major diagnostic subgroups. Rates were directly age‐standardised to the 2001 Australian standard population.9 For comparison, rates were also age‐standardised to the 2000 World Health Organization world standard population.10

Changes in incidence during 1983–2015 were examined in JoinPoint (United States National Cancer Institute; https​://surve​illan​ce.cancer.gov/joinp​oint). The Joinpoint model applies Monte Carlo permutation tests to detect significant changes in the magnitude or direction of trends;11 the year in which a change in trend is detected is termed a “joinpoint”. We fitted a maximum of two joinpoints to each of our data sets, allowing up to three distinct trend segments. We report incidence change in these segments as the annual percentage change (APC). An APC was deemed statistically significant if the corresponding 95% confidence interval (CI) did not include zero.

Incidence projections for all childhood cancers combined, as well as for the two largest diagnostic groups — leukaemias and tumours of the central nervous system (CNS) — were generated with the age‐period‐cohort method described by Mistry and colleagues.12 Specifically, Poisson regression models were applied using the Stata apcspline command, with counts as the dependent variable offset by the log of the corresponding population. Period and birth cohort effects (in single calendar years) were fitted with cubic splines.

Projected incidence counts and rates to 2035 (20 years beyond the baseline period) were extrapolated from these models. A damping parameter was specified to attenuate the projections, on the assumption that past trends will not continue indefinitely.13 In our major analyses, we applied an arbitrary damping factor of 16% per year, which conservatively reduced the observed linear trends for period and birth cohort effects (drift effects) by about 75% during the first 8 years of the forecast period. Sensitivity analyses applied alternative damping levels (8% or 25% per year), attenuating the drift effects by about 50% and 90% over 8 years respectively. In further sensitivity comparisons, projections were also calculated (with damping of 16%) using the high (series A) and low (series C) population projections.

Ethics approval for the ACCR study was provided by the University of Queensland Behavioural and Social Sciences Ethical Review Committee (reference, 2004000302) and by the fifteen Human Research Ethics Committees of the state and territory cancer registries and major children's hospitals.

For the most recent 5 years for which data were available, the mean annual number of children diagnosed with cancer was 770 (total for 5 years, 3851 children); the age‐standardised incidence rate was 174 cases per million children per year (Box 1). Age‐standardised rates calculated using the 2000 world standard population were very similar (Supporting Information, table 1).

Following a period during which the overall incidence rate of childhood cancer was stable in Australia (1996–2005), it rose slowly but steadily over the following decade. Recent increases in overall childhood cancer incidence rates have also been reported in Asia14,15 and North America.16,17 The reasons for these increases are unclear, but diagnostic improvements and changes in reporting may be contributing factors.16

Our estimated incidence rate for childhood cancer in Australia is lower than those in Italy, the United States, and Canada, similar to rates in New Zealand and several European countries (Spain, Germany, France, Sweden, the Netherlands), but higher than in the United Kingdom, Japan, and the Republic of Korea.18 Comparisons between countries (and even within the same country over time) should be made cautiously, however, given differences in operational details, such as cancer registration methods and data quality, that may influence estimated incidence rates.18

Incidence rate trends for most types of childhood cancer in Australia were reasonably similar to those in our previous study,6 but there were some important changes. Most notably, the incidence of CNS tumours has increased sharply since 2005. This rise may be related to improved accuracy in diagnosing CNS tumours.19,20 The incidence rate of CNS tumours in children (0–19 years) in the United States was steady during 1998–2013, but changes in the incidence of specific subtypes were reported.21 It should be noted, however, that the US study was focused on malignant cancers (apart from non‐malignant pilocytic astrocytoma), whereas we included all intracranial and intraspinal tumours, including those of benign or uncertain behaviour, consistent with the ICCC‐3 definition.1 We found that the proportion of CNS tumours with benign or unknown behaviour has increased markedly in Australia since 1983.

The recent rise in the incidence of “other malignant epithelial neoplasms and melanoma” in Australia (despite the significant decline in rate for the melanoma subgroup) is probably attributable to changes in practice that have improved the detection of certain epithelial cancers; in particular, the histopathology of appendectomy specimens is now routinely assessed, incidentally increasing the identification of carcinoid tumours of the appendix.

We have conservatively estimated that the annual number of children diagnosed with cancer in Australia will grow by almost 40% over the next 20 years, taking into account current cancer incidence rate trends and population growth. This information is critical for the planning of health services, including estimating the number of beds required in paediatric oncology treatment facilities and drug costs, workforce planning, and ongoing surveillance and treatment of late effects among the ever increasing number of children who survive cancer.

It has been projected that the number of children diagnosed with incident cancer worldwide will increase from 397 000 in 2015 to about 431 000 per year by 2030.22 The number is expected to decline or to remain stable in most regions, but population growth will drive up the number of cases in Africa.22 It should be noted that registration of non‐malignant CNS tumours varied between registries contributing to the dataset18 used in this global study, so that incidence may have been underestimated with respect to ICCC‐3 definitions. For example, the authors of the global report estimated that the number of incident childhood cancers in Australia during 2015 was 67322, but 779 cases were recorded in the Australian Childhood Cancer Registry.

We analysed high quality data for a large, population‐based cohort. Nevertheless, assumptions in the modelling process are subject to uncertainties that are magnified when making predictions over an extended period of time. We therefore applied a damping factor of 16% (rather than the default 8%) when modelling future incidence to reduce the impact on our projections of future changes in the direction or magnitude of incidence rate trends. This approach averted overestimating the future number of childhood cancers; in particular, the rapid rise in the incidence of CNS tumours since 2005 seems unlikely to continue indefinitely. Nonetheless, the projections for specific cancer types (leukaemias and CNS tumours) are less robust than those for all childhood cancers combined because of the smaller numbers of cases, and should be interpreted with due caution. Our sensitivity analyses illustrated how projections varied according to assumptions regarding the damping factor and population growth. The projected rise in the number of cancers between 2011–2015 and 2035 was found to be more sensitive to choice of population series (range with 16% damping, 18–58%) than to damping (range with intermediate population series, 31–51%).

The overall incidence rate of childhood cancer is slowly increasing after a ten‐year period during which it was stable. This finding is consistent with reports from other countries, raising questions about the reasons for the increasing rates. Greater investment in research into the aetiology of childhood cancers is required, particularly to identify modifiable risk factors. Our conservative estimates of the future burden of cancer in Australian children may inform health service planning, ensuring that our youngest cancer patients continue to receive the treatment and support they need. 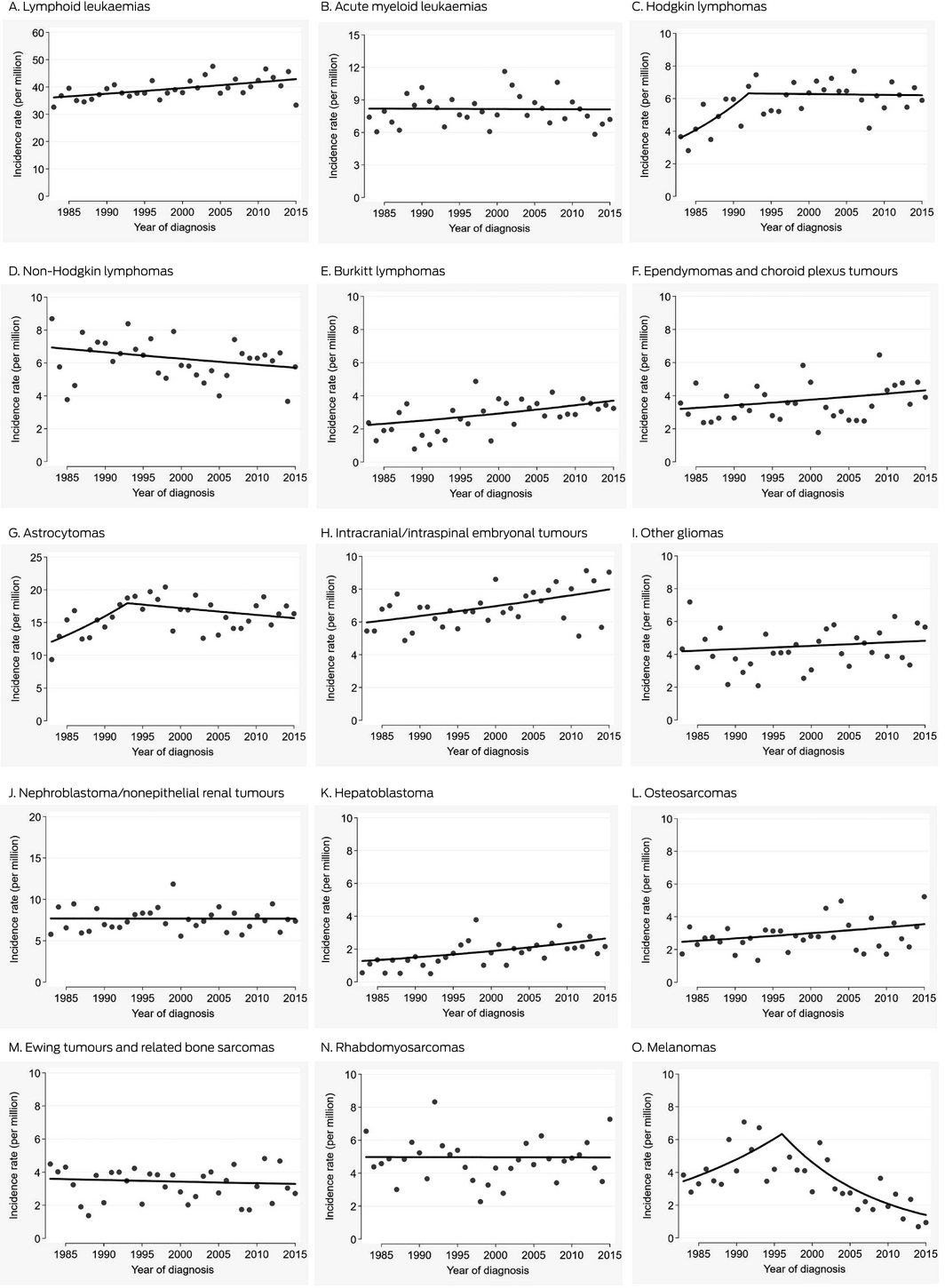 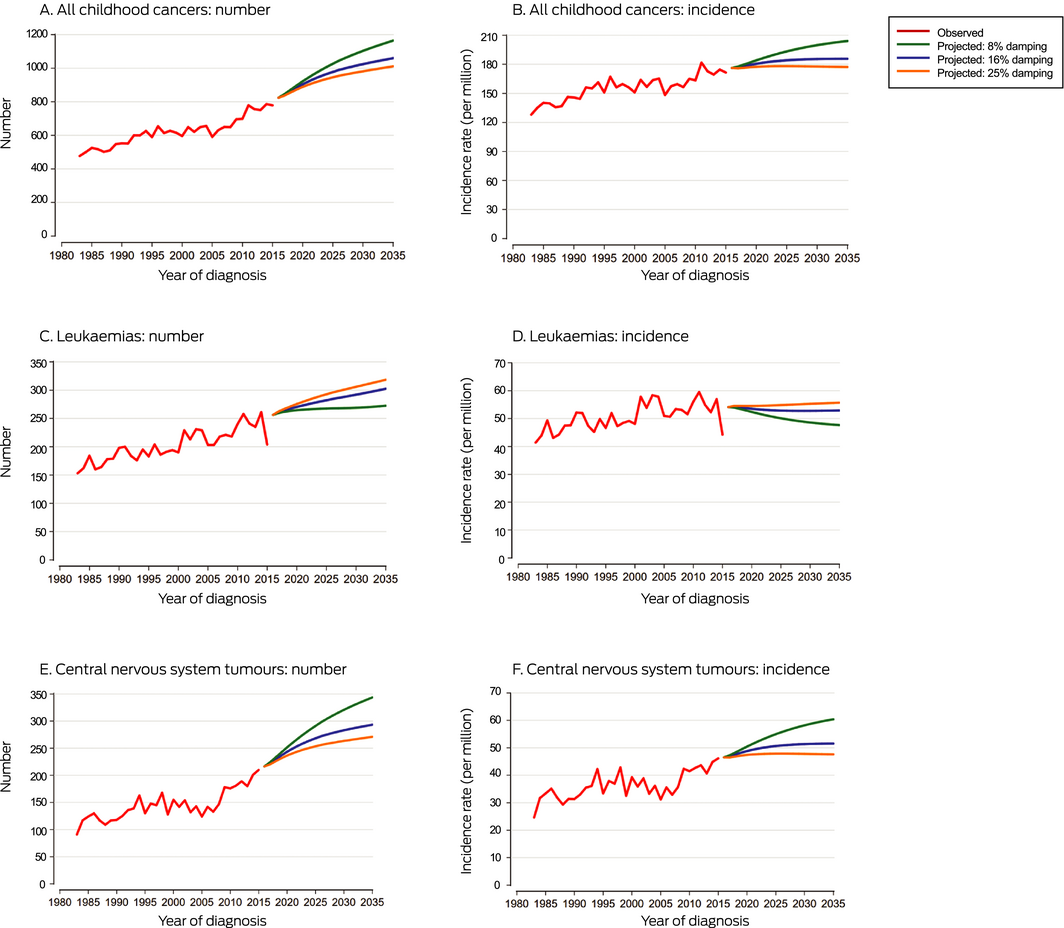 Patricia Valery was supported by an NHMRC Career Development Fellowship (1083090). We thank Leisa O'Neill for her work in the Australian Childhood Cancer Registry. We also acknowledge the assistance of all Australian state and territory cancer registries, the Australian Institute of Health and Welfare, and each of the major paediatric oncology treating hospitals throughout Australia.