Design: Prospective pilot study; participants self‐administered a questionnaire about full manuscript submissions (as first or senior author) rejected at least once during the past 5 years.

Conclusions: To help put authors out of their MiSeRY, journal editors could be more selective in the manuscripts they send for external review. Tempering pre‐submission expectations and mastering the Coping and reLaxing Mechanisms (CaLM) of senior colleagues are important considerations for junior researchers.

The known: Despite the ubiquitous nature of manuscript rejection, little is known about the associated ManuScript Rejection sYndrome (MiSeRY).

The implications: To alleviate MiSeRY, we recommend that first authors master the Coping and reLaxing Mechanisms (CaLM) of senior colleagues, that authors temper their expectations by familiarising themselves with journal acceptance rates, and that journal editors judiciously select the manuscripts they send for external review.

A 34‐year‐old cardiology fellow confided to a colleague that he had been experiencing feelings of anger and low mood. Earlier that day, the fellow was seen shaking his head in disbelief while reading (and carefully re‐reading) a decision letter. His colleague identified that these symptoms were consistent with the ManuScript Rejection sYndrome (MiSeRY).

MiSeRY is increasingly prevalent in the academic and medical communities. Higher numbers of medical graduates undertaking doctoral studies, combined with low manuscript acceptance rates by leading medical journals, are contributing factors.1,2 Empirical findings have suggested that symptoms experienced by those with MiSeRY closely mirror the Kübler‐Ross stages of grief.3,4 However, the length of time between “denial” and “acceptance” during manuscript rejection is highly variable.

We therefore examined the time course of grief during manuscript rejection as experienced in a tertiary academic centre, and assessed whether specific factors are predictive of prolonged grief: that is, MiSeRY.

Participants in this single centre cohort study were academic physicians in the cardiology department of a tertiary institution. The primary inclusion criterion was publishing more than five research manuscripts during the preceding 5 years.

Participants reported (in self‐administered questionnaires) grief duration for full article manuscripts rejected at least once during the past 5 years (maximum of five manuscripts). Only submissions on which the participants were either the first or senior author were included. Grief duration was defined as the time from first viewing the decision letter to ultimate “acceptance” of the decision (in hours). Grief duration exceeding the study population median was defined as MiSeRY.

Potential predictors of MiSeRY were specified a priori, including objective factors such as journal impact factor, the submission number for the manuscript, authorship status, whether the manuscript was externally reviewed, and time from submission to decision (in weeks). The subjective level of pre‐submission expectation about the likelihood of manuscript acceptance was also ascertained.

Continuous data are presented as medians with interquartile ranges, categorical data as absolute numbers and percentages. Linear relationships between continuous variables were assessed (Pearson correlation coefficient), and relationships of MiSeRY with the identified parameters were examined by univariate and multivariate logistic regression; we report adjusted odds ratio (aORs) with 95% confidence intervals (CIs). Goodness‐of‐fit of logistic regression was assessed with the Hosmer–Lemeshow test. P < 0.05 (two‐sided) was deemed statistically significant. All data were analysed in SPSS 25 (IBM).

This study was approved by the institutional review board at Austin Health, and all study participants provided verbal consent.

Sentiments that captured the spirit of MiSeRY corresponded to the various stages of grief as described by Kübler‐Ross (Box 4).

We found that MiSeRY was significantly more likely for first authors of rejected manuscripts that had been sent for external review and for which authors had high pre‐submission expectations of acceptance. Age, sex, journal impact factor, submission number, and decision duration were not significant predictors of MiSeRY.

Our findings suggest that with great expectations comes the potential for great MiSeRY. Manuscripts associated with high pre‐submission expectations and sent for external review were associated with increased MiSeRY when rejected. This was especially true for first authors, who are not only more personally invested in the reported research but must also bear the burden of re‐formatting the manuscript for the next submission. Further, we hypothesise that senior authors, who have undoubtedly encountered MiSeRY during their formative research years, may have developed enhanced Coping and reLaxing Mechanisms (CaLM) that guard against a potential state of permanent MiSeRY.

While longer decision times were associated with greater MiSeRY in the univariate analysis, this relationship was not significant in the multivariate analysis. Longer decision times are expected for manuscripts sent for external review, the major driving factor for MiSeRY. Interestingly, journal impact factor did not influence MiSeRY, possibly because of competing factors; while a higher impact factor suggests higher stakes, it may be offset by the authors’ tempered expectations.

Among the limitations to our study was the fact that it was performed at a single centre with academic physicians from a single specialty, perhaps causing selection bias. In particular, the sentiments in Box 4 may not be generalisable to other researchers (particularly those not on Tinder). Further, all but one of the participants were also co‐authors of this article, introducing the possibility for response bias. However, the potential predictors of MiSeRY were pre‐specified, and self‐experimentation is, in any case, sometimes necessary for advancing medicine.6,7

Reports of the experience of grief may be affected by recall bias. Importantly, senior authors found it somewhat more difficult to recall rejections, while first authors had an uncanny ability to recall them all. Although our senior authors were older, we are (almost) certain that this difficulty with recall is attributable to their greater CaLM rather than to cognitive decline (but we did not undertake neurocognitive testing prior to participant enrolment).

Our statistical analysis assumed independence of events. Potentially important effects for nested data, including individual author traits, medical specialty (although we are confident that cardiologists are an accurate representation of the broader medical community), affiliated institution, and geographic location, could not be investigated. However, the findings of our pilot study could guide future larger scale studies.

Current interventions for MiSeRY are limited to satirical frivolity.8 Our findings are therefore potentially extremely important for mitigating MiSeRY and improving the mental wellbeing of medical authors. Some journals attempt to reduce author expectations by publishing their low acceptance rates, and judicious selection of manuscripts sent for external review may enhance this effect. Senior authors could also counsel first authors about enhancing CaLM.

To help put authors out of their MiSeRY, journal editors could be more selective in the manuscripts they send for external review, while first authors need to temper their expectations and master the CaLM of their senior colleagues. Larger scale studies validating and building upon these findings are required to fully appreciate the intricacies of MiSeRY and to develop therapeutic interventions. A prospective international registry may provide the necessary data and allow researchers to share in each other's MiSeRY. 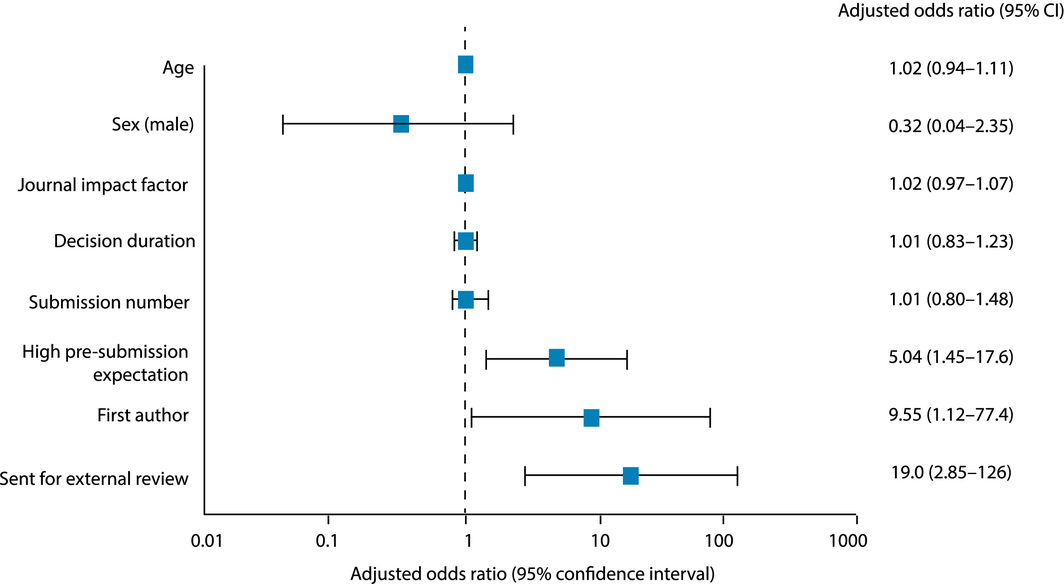 * In each case adjusted for all other factors in the graph. Goodness of fit (Hosmer–Lemeshow): P = 0.38.

We acknowledge the various medical journals that have rejected our manuscripts and provided inspiration for this study. To quote a contemporary poet: “thank u, next”.

All but one of the rejected authors in this study are co‐authors of this article. We are uncertain whether referencing Tinder or quoting Ariana Grande infringes any copyright laws. We have no other relevant disclosures.