Conclusion: Rapid PCR testing of ED patients for influenza virus and RSV was associated with better outcomes on a range of indicators, suggesting benefits for patients and the health care system. A formal cost–benefit analysis should be undertaken.

The known: Rapid polymerase chain reaction (PCR) testing for influenza and respiratory syncytial viruses (RSV) was introduced in New South Wales in July 2017. Its impact on outcomes for emergency department (ED) patients has not been investigated.

The implications: Rapid PCR testing of ED patients for major respiratory viruses can benefit patients and reduce resource use.

The health and economic burdens associated with acute respiratory infections by influenza and respiratory syncytial viruses (RSV) are significant in Australia and overseas.1,2,3 Polymerase chain reaction (PCR) testing is effective for confirming respiratory viral infections.4 Multiplex PCR can detect numerous respiratory viruses, including influenza and parainfluenza viruses, RSV, adenovirus, rhinovirus, human metapneumovirus, enterovirus, bocavirus and coronavirus with very high sensitivity and specificity.5 Although the results of standard multiplex PCR are accurate and comprehensive, it has traditionally been performed in a central laboratory with a lengthy turnaround time, which may be inconvenient in settings where test results are urgently required, including emergency departments (EDs).

Rapid, easy‐to‐use PCR‐based respiratory virus diagnostic tests have been introduced in recent years;6,7 the GeneXpert system (Cepheid), for instance, was introduced in New South Wales in July 2017. Rapid PCR tests were expected to facilitate timely and appropriate initiation of treatment, improve outbreak prevention and infection control measures, and expedite the assessment of patients in EDs.

In this study, we analysed routinely collected data to determine whether rapid PCR testing for influenza and RSV infections in EDs is associated with improved patient and laboratory outcomes. We compared data for patients tested for influenza A/B viruses and RSV immediately after rapid PCR diagnosis was introduced (July–December 2017) with data for patients tested with a standard multiplex PCR system during July–December 2016.

We undertook a before‐and‐after study in four metropolitan public hospital EDs in Sydney, NSW: three general hospitals (EDs A, B and C; 76 228, 54 443 and 50 025 annual ED presentations respectively) and one children's hospital (ED D; 36 700 annual ED presentations; all data for January–December 20168). The four hospitals were served by a single pathology laboratory provider.

The primary outcomes were admission to hospital, ED length of stay (LOS), test turnaround time, and the patient receiving their test result before leaving the ED. ED LOS was defined as the time from arrival in the ED to discharge or admission to hospital. Turnaround was defined as the time from when the sample was received by the laboratory to when the test result was available in hospital electronic records. As secondary outcomes, we compared ordering of typical biochemistry and haematology tests (full blood count; electrolyte, urea, creatinine levels; liver function test; blood gas analysis; C‐reactive protein level) and microbiology tests (blood culture; urine microscopy, culture and sensitivity analysis; sputum culture; respiratory bacteria and virus serology) during the two study periods.

Sensitivity analyses limited to data for children (under 18 years of age) or older patients (over 60 years of age) were conducted. P < 0.05 (2‐tailed) was deemed statistically significant.

Ethics approval for the investigation was granted by the Human Research Ethics Committee of the South Eastern Sydney Local Health District (reference, HREC/16/POWH/412).

We analysed data for 3741 patients presenting to the four EDs during two periods: 1491 consecutive patients during July–December 2016 (standard PCR) and 2250 during July–December 2017 (rapid PCR). Baseline characteristics for the two groups were similar in terms of sex, triage category, and arrival day of the week, but differed significantly for age, arrival time, and mode of arrival (Box 1). Among those tested by rapid PCR, supplementary standard PCR tests were ordered for 133 patients (5.9%), and standard PCR tests for respiratory viruses other than influenza viruses A/B and RSV were requested for a further 320 patients (14.2%).

The 16 265 biochemistry/haematology and microbiology tests comprised 71.1% of the 22 876 other tests (that is, not including PCR virus testing) ordered for patients in the study. After adjusting for baseline characteristics, the proportions of patients for whom full blood count, electrolyte/urea/creatinine levels, liver function, or C‐reactive protein were assessed were similar, as were the proportions for urine microscopy, culture and sensitivity tests. Significantly fewer blood culture, blood gas, sputum culture, and respiratory bacterial and viral serology tests were ordered for patients in the rapid PCR group (Box 4).

In this before‐and‐after study, we found that rapid PCR testing of ED patients for major respiratory viruses was associated with significantly fewer admissions to hospital, more rapid delivery of test results, more patients receiving their test results before leaving the ED, and less frequent ordering of some common microbiology tests.

Other studies have also reported that hospital admission numbers were significantly lower when rapid influenza virus testing was used in EDs. An analysis of outcomes for more than 300 adults at a tertiary care centre in New York found that early diagnosis of respiratory infections was associated with significantly fewer hospitalisations of influenza‐positive patients.7 In a small Irish study (73 patients), the hospital admission rate for obstetric patients declined from 88% to 45% after on‐site rapid influenza PCR testing was introduced.10 The differences in clinical setting and patient group may explain the smaller decline in our study (from 78% to 67%). Non‐PCR‐based rapid diagnostic tests for respiratory viruses have also been associated with lower hospital admission rates.11,12

The main reason for fewer hospital admissions of patients tested by rapid PCR may be that the earlier availability of results enables clinicians to quickly diagnose or exclude respiratory infections and to make timely and informed decisions about whether to discharge the patient or admit them to hospital. When standard PCR was used, in contrast, our findings suggest that these decisions were made before the test results were available. The possible benefits of not admitting patients to hospital, beyond those for individual patient management, include better infection control and outbreak prevention, as well as reduced demands on hospital resources.13,14 The impact of rapid PCR testing on outbreak prevention and infection control measures should be evaluated. Rapid influenza virus testing may also have practical implications for hospital bed management.10,15

ED LOS was similar in our study before and after the introduction of rapid PCR methods. This finding was not unexpected, as test turnaround time is not the only rate‐limiting factor for decision making in EDs.16 Before rapid PCR methods were introduced, the long turnaround time of multiplex PCR did not necessarily extend a patient's stay in the ED, as they were usually admitted to hospital or discharged home before the results were available. Consequently, more rapid delivery of test results alone would not reduce ED LOS.

Reports on the effect of rapid influenza virus testing and LOS have been conflicting. While evidence for an association between rapid testing and shorter overall inpatient LOS has been reported,6,11 findings regarding ED LOS are inconsistent.7,17,18 For example, a Cochrane review based on three randomised controlled trials did not find a statistically significant association of rapid viral diagnosis with lower mean ED LOS.18 In a study in children, ED LOS was actually 26 minutes longer with rapid PCR; inpatient LOS did not differ between the two groups, but was significantly shorter when the analysis was limited to patients with positive test results.6

We found that ordering of some other microbiology tests, including blood culture, sputum culture, and respiratory bacterial and virus serology, was significantly less frequent for patients tested by rapid PCR. The effect of PCR‐based rapid testing on the ordering of other laboratory tests has not previously been reported, although some studies of antigen‐based point‐of‐care testing have examined this outcome.12 Consistent with our finding, several investigators have reported fewer blood culture tests19,20 and basic biochemistry and haematology tests, including full blood count,20,21 C‐reactive protein testing,21 and urinalysis,20,21 when point‐of‐care testing was used.

The higher rate of positive results for patients tested by rapid PCR than for those tested by standard PCR may reflect a higher prevalence of influenza during 2017 than in 2016.

The rapid PCR system in our study accurately detects influenza viruses A/B and RSV but, unlike the standard multiplex PCR, cannot detect other clinically relevant respiratory viruses, such as rhinovirus, coronavirus, human metapneumovirus, parainfluenza virus, adenovirus, enterovirus, and bocavirus. If infection with other respiratory viruses is suspected, patients may therefore need further investigations. Standard multiplex PCR can provide broader information, as it can detect multiple respiratory viruses in a single run, although the long turnaround time restricts its suitability for urgent clinical decision making. Improving the turnaround time of multiplex PCR analysis may achieve better outcomes.

The strengths of our study include its relatively large sample size; further, unlike many similar investigations, ours was a multicentre study in four hospital EDs, enhancing the generalisability of our findings. However, our analyses were not adjusted for comorbid conditions, as this information was not available. Because our study was an uncontrolled before‐and‐after study, our results cannot be interpreted as indicating causal relationships. As with all non‐randomised trials, we could not fully account for all potential confounding variables, nor for temporal trends and other unmeasured factors, such as changes in clinician testing practices or differences in the prevalence and severity of disease during the two study periods.22 For example, a shortage of inpatient beds caused by a high prevalence of influenza could influence decisions in a busy ED about admitting patients to hospital. However, we attempted to reduce seasonal effects by selecting similar time frames for the two study periods, to reduce selection bias by including all ED patients tested for influenza virus and RSV, and to control for differences in baseline patient characteristics by applying multivariate modelling. As medications data were not available to us, we were unable to assess the impact of rapid PCR testing on antibiotic and antiviral drug use. Similarly, the cost–benefit balance of rapid testing was not evaluated because relevant data were not available. The cost per patient of rapid PCR testing is generally higher than for central laboratory testing, but our findings suggest potential savings through lower numbers of hospital admissions and reduced resource use. This question could be evaluated in a further study.

Rapid PCR testing for influenza virus and RSV infections in patients attending EDs was associated with significant improvements in a range of patient and laboratory outcomes, suggesting potential benefits for both the patients and the health care system. A cost–benefit analysis could examine the impact of rapid PCR testing on bed management and antimicrobial drug prescribing. 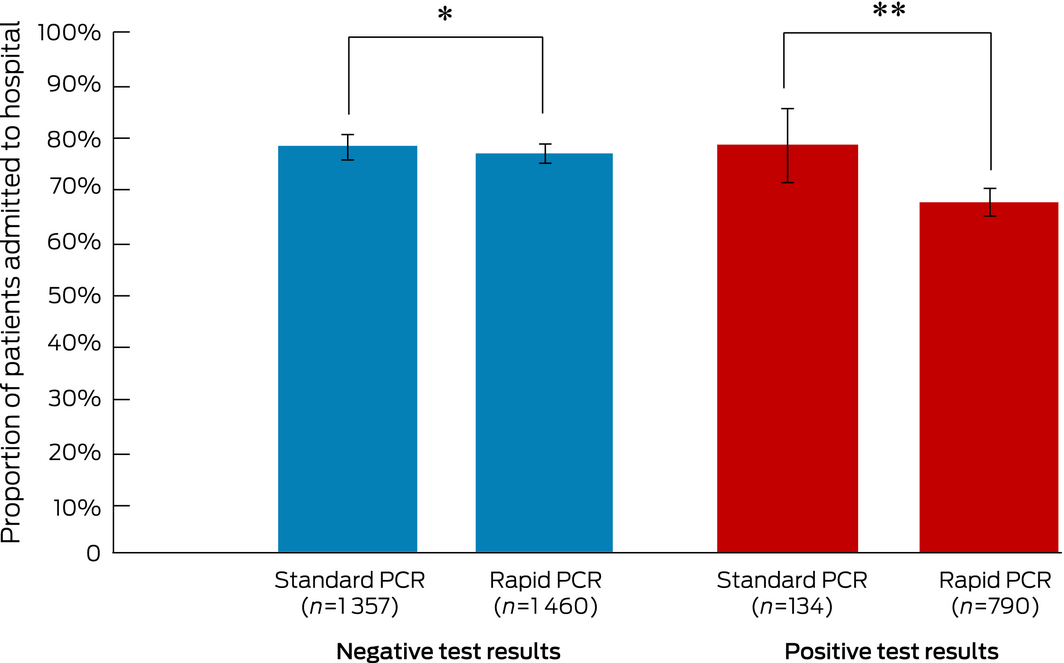 The project was part of a partnership project funded by a National Health and Medical Research Council of Australia Partnership Project Grant (APP1111925), in partnership with NSW Health Pathology and the Australian Commission on Safety and Quality in Healthcare.23