The Guttmacher–Lancet Commission on sexual and reproductive health and rights: how does Australia measure up?

The Guttmacher–Lancet Commission calls for critical analysis of the gaps in sexual and reproductive health and rights that exist around the world and quantifies the toll these gaps take on individuals, communities and economies. In this context, we examine how Australia measures up in relation to a sexual and reproductive health and rights agenda (Box 2) focusing on human immunodeficiency virus (HIV) and sexually transmitted infections (STIs), unintended pregnancy, and sexual violence.

Enhanced testing for early diagnosis, effective antiretroviral treatment and the recent Pharmaceutical Benefits Scheme listing of pre‐exposure prophylaxis have reduced new HIV infections in high risk populations. This reduction is greatest in men who have sex with men (MSM), a broad term which includes gay‐identified men, heterosexually identified MSM and bisexual men.3,4 Significant improvements in early initiation of antiretroviral treatment provide individual as well as public health benefits.5 However, new diagnoses in the Aboriginal and Torres Strait Islander population increased by 41% compared with a decline of 12% in the non‐Indigenous population between 2013 and 2016.6 Despite the overall reduction among MSM in major cities, subpopulations such as bisexual men (who may be less likely to access HIV prevention and testing services than gay‐identified MSM) and Asian‐born MSM continue to be at high risk.3,4 The decrease in consistent condom use among gay and bisexual men since the introduction of pre‐exposure prophylaxis has led to an increase in the burden of bacterial STIs, particularly rectal chlamydia infections, and warrants attention.7 Pre‐exposure prophylaxis guidelines for pregnant and lactating women should also be prioritised to ensure that a range of safe and effective options are available to reduce the vertical transmission of HIV.8

In relation to STIs, since the 2007 introduction of the human papilloma virus (HPV) vaccine, Australia has seen a significant decline in genital warts, with 96% and 88% reductions in females and males aged below 21 years, respectively.4 The recent introduction of the 9‐valent vaccine in the national school‐based program and the implementation of the renewed cervical screening program based on primary HPV screening sets Australia on course as a global leader in the elimination of HPV‐related disease including cervical cancer. However, there are still major disparities in cervical cancer screening and diagnosis. Women from very remote regions and from the lowest socio‐economic group are less likely to be screened and, while national screening rates in Aboriginal and Torres Strait Islander women are not available, their mortality rate is four times that of non‐Indigenous women.9

Chlamydia trachomatis infection remains the most common STI, with three‐quarters of cases occurring in young people aged 15–29 years.4 Most infections are asymptomatic, but if left untreated can result in scarring of the upper reproductive tract, which in turn can cause serious complications including pelvic inflammatory disease and tubal infertility in women and infertility in men.10,11 The number of gonorrhoea infections is also increasing, with antibiotic options already limited by antimicrobial resistance.12 Recently reported cases of ceftriaxone‐resistant Neisseria gonorrhoeae from Australia highlight the significant threat of multidrug‐resistant infection.13 While chlamydia‐related pelvic inflammatory disease is more common, gonorrhoea‐related disease more often results in hospitalisation.14 In the context of multidrug resistance, this has serious reproductive health consequences including infertility.

A recent survey found that one in four Australian women has experienced an unintended pregnancy in the past 10 years and that most were not using contraception or used a method with relatively low effectiveness due to the demands of consistent use, such as condoms or contraceptive pills.17 Because of the out‐of‐pocket costs, Australian adolescents face particular barriers in accessing contraception compared with their counterparts in countries such as England.18 Teenage birth rates have fallen in recent decades due to improved access to contraception, but women from the lowest socio‐economic quintile have nine times the rate of teenage births, and those of Aboriginal and Torres Strait Islander background have five times the rate, compared with those in the highest quintile.19 These data point to disadvantages and disparities for teenagers who see fewer alternatives to early pregnancy and parenting. Ensuring access to non‐judgemental antenatal and postnatal care for all women, including teenagers, is essential, as is the provision of preconception care.

Highly effective long acting reversible contraception (LARC), namely implants and intrauterine contraception, is globally advocated by governments as a key strategy to reduce unintended pregnancy.18 Uptake of LARC has increased in Australia from 2.4% in 2001–2002 to 11% in 2012–2013,20 although we lag behind other high income countries.21 This is due to low awareness and misperceptions about these methods, but also to challenges in meeting increasing demand, especially for intrauterine methods, with poor remuneration for primary care insertions of intrauterine contraception and limited training places for those motivated to upskill.22 Increasing service delivery and training opportunities for doctors, nurses and midwives across general practice, public gynaecology and obstetrics services and sexual health clinics could overcome this mismatch in LARC supply and demand. However, LARC will not suit all women because of reasons such as side‐effect profile, ease of initiation and personal preference,23 and all contraceptive choices must be available and provided free of coercion.

Even with improved access to contraception, there will be a continuing need for abortion services, and surgical abortion remains one of the most commonly performed gynaecological procedures in Australia. South Australian data suggest about one in four women will have an abortion in their lifetime.24 The most recent national data were released in 200325 and, while the Northern Territory initiated data collection in July 2017, currently only Western Australia and South Australia have longitudinal statistics showing that abortion rates are falling.24,26 Practitioners report that the current complex and varied legal status of abortion has a significant impact on service provision and compromises patient care.27,28 Equitable access remains an aspiration in most states and territories, with the overwhelming majority of abortions occurring in private clinics in major centres, resulting in significant financial challenges for people in rural and outer‐urban areas due to additional travel and accommodation needs.29 The 2013 Pharmaceutical Benefits Scheme listing of medical abortion drugs potentially allows general practitioners to provide this service locally, but a New South Wales study highlighted the challenges experienced by GPs in delivering medical abortion, including stigma and lack of support from colleagues and public hospitals.30 There are a number of initiatives to increase access, including telemedicine models. However, federal and state health departments must take responsibility for ensuring equity in the delivery of abortion services.

Sexual violence is predominantly perpetrated on women by men and is associated with chronic adverse effects on the physical, mental and reproductive health of victims.31 Recently published Australian data estimated that one in six women and one in 16 men over the age of 15 have been subjected to physical and/or sexual violence by a current or previous cohabiting partner.32 Most likely these figures vastly under‐report the reality, as the issue is deeply stigmatised and often hidden. The Australian Bureau of Statistics reports that 80% of women who had experienced male‐perpetrated sexual violence did not report it to the police,32 and of incidents that are reported, only 10–20% result in a conviction in court.33 The government response in the National Plan to Reduce Violence Against Women and their Children 2010–2022 recommends a more coordinated approach to justice, policing and legal assistance for people experiencing family and sexual violence.34 Key actions have included building the evidence base for effective early prevention and intervention strategies. This will require addressing the significant gaps in data collection that are currently fragmented and dispersed. The global Me Too movement has encouraged more open discussion about sexual violence in universities.35

We can and should celebrate the many sexual and reproductive health and rights advances in Australia but must also recognise the gaps that affect our most vulnerable populations (Box 3). This article highlights overlapping sexual and reproductive health and rights areas that would benefit from a truly integrated approach to workforce education and training, service delivery and research. There is an urgent need for robust national data collection so we can evaluate the most effective ways to meet the needs of our patients. Strong linkages, cross‐sector collaborations and innovative approaches to service delivery to capitalise on synergies are imperative. If we can make these changes then Australia can be a global leader in sexual and reproductive health and rights and fulfil its commitment to the Sustainable Development Goals. 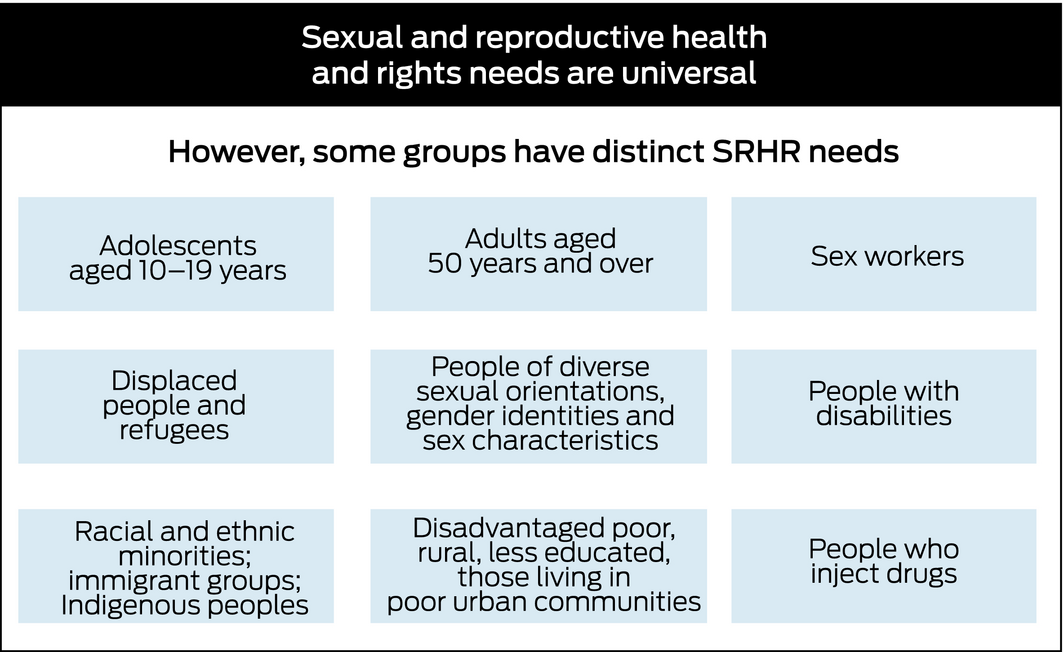 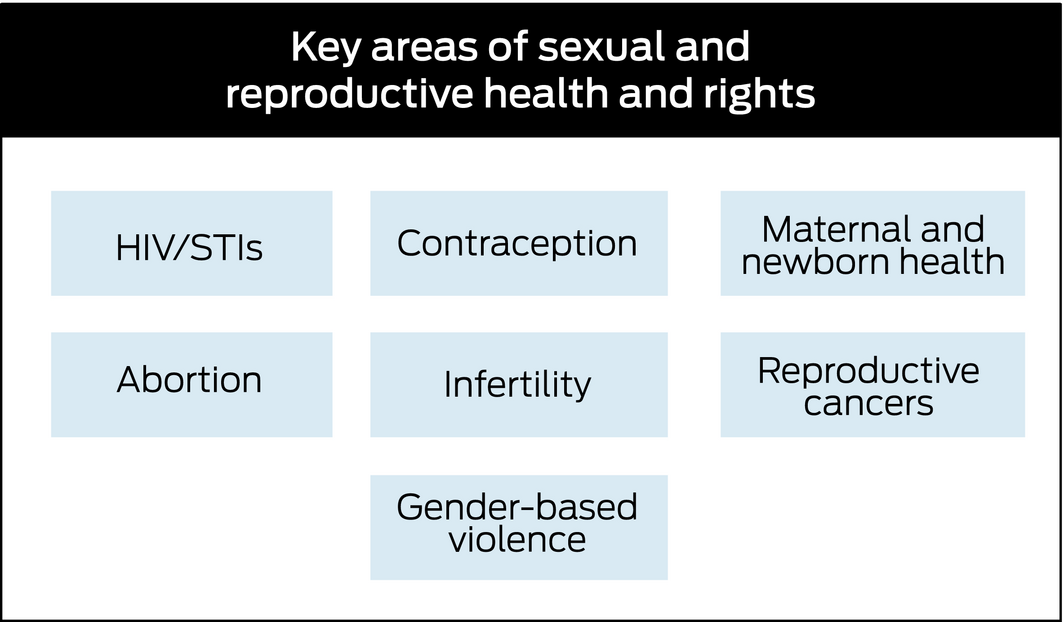