Unintended and unwanted pregnancy in Australia: a cross-sectional, national random telephone survey of prevalence and outcomes

Planned parenthood has important benefits for maternal and infant health. Monitoring and preventing unintended pregnancy is therefore an important public health goal.1 In the only Australian national household survey about mistimed or unintended pregnancy (undertaken 2005), 18% of women of reproductive age (18–44 years) reported that their most recent pregnancy was mistimed, and a further 17% reported that the pregnancy was unwanted.2

We undertook a contemporary national population survey to assess the prevalence and outcomes of unintended pregnancy during the preceding ten years. Trained female interviewers (Hunter Valley Research Foundation) undertook a national random computer-assisted telephone (mobile and landline) survey (weekdays, 9 am–8 pm) during December 2014 – May 2015. Women aged 18–45 years with adequate English were asked whether they had had an unintended pregnancy during the past ten years, and whether any unintended pregnancy was unwanted. We also asked about the outcomes of all pregnancies. A population sample size of 2000 was required to detect a prevalence of unwanted pregnancy of 10–50% with 90% power. La Trobe University Human Research Ethics Committee approved the study (reference, 14-075).

In summary, about one in four of our respondents (26%) had fallen pregnant in the past ten years without planning to do so, and 30.4% of unintended pregnancies ended in abortions. Nearly one in five women who had been pregnant (18.8%) reported having had an abortion, but the proportion is likely to have been depressed by under-reporting on this sensitive topic.

Despite the availability of effective contraception in Australia, we found that, as in the United States,3 about half of the unintended pregnancies were in women not using contraception. Research is required to explore the reasons for not doing so, and to determine where education would be most helpful.4 Clinicians and services should focus their attention on women at highest risk of unintended pregnancy, including those who have had three or more pregnancies. The immediate post partum and post-abortion periods are opportune times for intervening to avert unintended pregnancies. 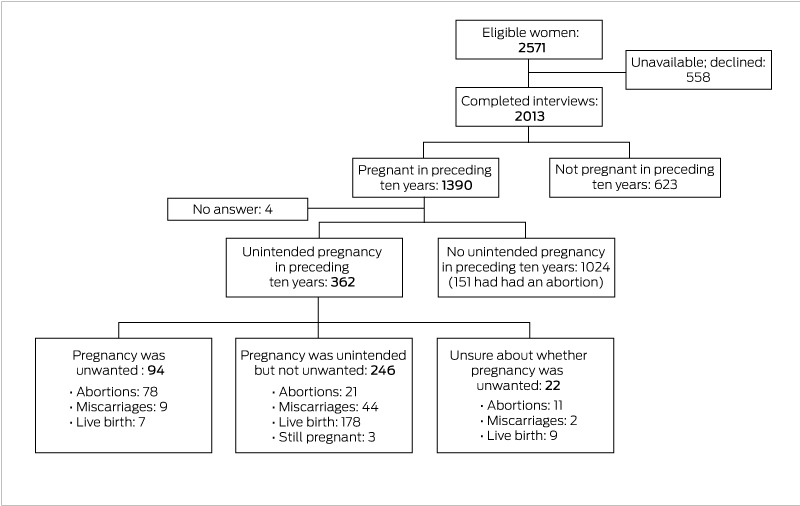 We acknowledge with gratitude the contributions of Philip Goldstone and Kerry Petersen, and funding support from Women’s Health Around Victoria, The Roberta Holmes Transition to Contemporary Parenthood Program, and La Trobe University. We also acknowledge the contribution of the Hunter Valley Research Foundation to this study, and thank the women who participated in the survey.