Exposures to e‐cigarettes and their refills: calls to Australian Poisons Information Centres, 2009–2016

The popularity of e‐cigarettes has increased in Australia since they first became available as smoking cessation tools; an estimated 1.3% of the New South Wales population used them in 2015, and as many as 8.4% had experimented with them.1 E‐cigarettes have been recommended by Public Health England and the Royal College of Physicians as safe smoking cessation tools.2,3 In Australia, a prescription is required for legally importing nicotine‐containing e‐cigarettes.4 The safety of these products for users and the risks for members of their households have not been established. Imported products may not conform to Australian standards, including having child‐resistant closures and appropriate labelling, and refill bottles containing highly concentrated nicotine solutions — one millilitre of which can be lethal if ingested by a child — can be purchased online.

We undertook a retrospective analysis of calls to Australian Poisons Information Centres (PICs) during 2009–2016. PICs play a valuable role as health care sentinels when new products such as e‐cigarettes are introduced. Our study was exempted from formal ethics approval by the Children's Health Queensland Hospital and Health Service Human Research Ethics Committee.

The numbers of calls about e‐cigarette exposures increased considerably across the study period (Box), although the overall PIC call volume was stable at about 164 000 cases per year. Of 202 sequential e‐cigarette‐related cases, 38% were from relatives of children worried about their exposure to the liquid component of an e‐cigarette after children were found with uncapped vials, sucking the mouthpiece, drinking from separated liquid containers, inhaling the liquid, eating the cartridge, or having splashed liquid in their eyes. Adults and adolescents were the subjects of calls in 126 cases (62%), including calls about the potential side effects of routine use or accidental ingestion, or about skin or eye splash exposures. Twelve calls followed deliberate administration for self‐harm, ten by oral ingestion and two by injection. The reported median concentration of the 43 commercial nicotine solutions involved was 20.2 mg/mL, (range, 0.06–200 mg/mL), but confirmatory testing was not performed and actual concentrations may be higher than labelled, as noted recently.5 Most patients had only mild symptoms at the time of the call to the PIC, mainly gastrointestinal disturbances; twelve had moderate symptoms, usually a gastrointestinal disturbance combined with sedation. The potential risks, however, should not be underestimated; we are aware that an infant recently died in Australia after ingesting a concentrated nicotine solution. Almost all exposures of children to nicotine‐containing e‐cigarette liquid require their hospitalisation for monitoring of possible toxic effects.

Australian PIC data refer to calls about exposures to e‐cigarette liquid but may not reflect the prevalence of such exposures. These data nevertheless provide insights into patterns of exposure, usage, and the side effects of e‐cigarettes. Our study can assist health care practitioners when advising patients about the use of e‐cigarettes, and our findings indicate that nicotine‐containing products should be stored where children cannot access them. We would welcome any move to improve the safety of electronic cigarettes, including changes to their labelling, storage, and packaging. 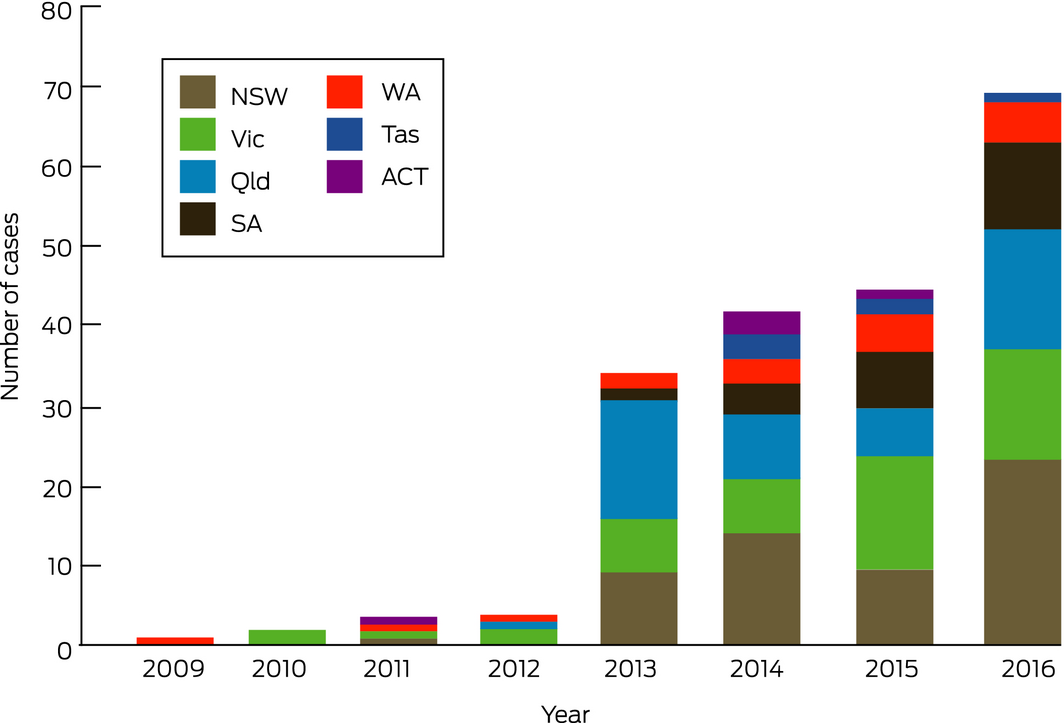 No calls were received about cases in the Northern Territory.

Jared Brown has received consultancy fees from GlaxoSmithKline Consumer for sitting on an advisory board regarding paracetamol.