Objectives: To determine the factors associated with survival of patients with hepatocellular carcinoma (HCC) and the effect of HCC surveillance on survival.

Conclusions: Survival for patients with HCC is poor, but may be improved by surveillance, associated with the identification of earlier stage tumours, enabling curative therapies to be initiated.

The known The incidence and mortality of hepatocellular carcinoma (HCC) are rising more rapidly in Australia than those of other cancer types.

The new Survival for patients with HCC is poor, with a median survival time of 20.8 months. Surveillance is associated with improved survival, but participation rates are low (40%), despite 89% of patients with HCC qualifying for surveillance. Risk factors for HCC, such as cirrhosis and viral hepatitis, are underdiagnosed, and are often first identified when HCC is diagnosed.

The implications Strategies for increasing the recognition of risk factors for HCC and for improving surveillance rates among people at risk, in line with established international guidelines, are needed.

On a global basis, liver cancer is the fifth most frequently diagnosed cancer type, and causes the second highest number of cancer-related deaths.1 Incidence and mortality are both highest in East and South-East Asia, Africa, and developing nations, but are rising in Western countries; the increase in the number of liver cancer-related deaths has been the most rapid for any cancer type in Australia over the past 40 years.2

HCC surveillance facilitates diagnosis at a stage of disease when curative treatments are effective, and is associated with reduced mortality.8 International guidelines9-11 recommend surveillance as standard practice, but uptake is poor and its implementation varies between institutions and physicians.12,13 Barriers to surveillance include lack of awareness of the underlying risks, low rates of screening for cirrhosis and viral hepatitis, cultural and linguistic difficulties, and cost and resource limitations.

We recently reported the first Australian population-based study of incident HCC.14 We found that age-standardised incidence rates of HCC in Melbourne were twice as high as reported by the Victorian Cancer Registry: 10.3 cases (95% confidence interval [CI], 9.0–11.7) per 100 000 men and 2.3 cases (95% CI, 1.8–3.0) per 100 000 women. In this new study, we aimed to determine overall survival for patients with HCC and to identify factors that influence survival. We hypothesised that participating in an HCC surveillance program would be associated with diagnosis of HCC at an earlier stage and consequently with improved survival.

Data for the prospective clinical cohort of patients in the Melbourne statistical division newly diagnosed with HCC during 1 July 2012 – 30 June 2013, identified in our earlier study, were analysed.14 The Melbourne statistical division has an estimated population of 4 300 207 (projected population for 2012–13)15 that is ethnically diverse; 35% of residents were born outside Australia. Patients residing outside the division (defined by residential postcodes) were excluded.

The population-based Victorian Cancer Registry collects data for all patients with cancer in the Melbourne statistical division. The region includes seven tertiary referral public health services, all of which were participating study sites. Each health service includes a tertiary university teaching hospital, with associated secondary hospitals and radiology and pathology services.

Our case ascertainment methodology was reported previously.14 Data for patients at all study sites were captured (with the informed consent of the patients) and cross-referenced with Victorian Cancer Registry data. Data were de-identified and stored on a secure database.

Data collated from patient records included demographic information (including ethnic background and place of birth), residential postcode, aetiology of chronic liver disease, the presence of cirrhosis, Child–Pugh scores, alpha-fetoprotein levels, mode of presentation, participation in a surveillance program, Barcelona Clinic Liver Cancer (BCLC) stage, and treatment modality. The aetiology of chronic liver disease was defined by the consulting physician, and verified by pathology or radiology results if the cause was not documented. Cirrhosis status was determined after a review of histology, transient electrography, radiology, and biochemistry findings. Treatment modality was defined as the first treatment given, except for patients who were downstaged when more curative therapy was later assigned.

Three ethnic groups were defined for the purposes of our analysis: white (including Egypt, Middle East), African (sub-Saharan Africa), and Asian (mainly East and South-East Asia, with three patients from India or Sri Lanka). Indigenous status was not recorded.

Participation in a surveillance program was defined as patients with risk factors defined in international guidelines — cirrhosis of any cause; chronic HBV infection in Asian men over 40, Asian women over 50, African patients over 20 years of age, and people with a family history of HCC9-11 — undergoing 6-monthly ultrasound assessment with or without alpha-fetoprotein assessment.

The primary study outcome was overall survival. Survival time was calculated from the date of diagnosis until the date of notified death, as retrieved from hospital records, the Victorian Cancer Registry, and the Registry of Births, Deaths and Marriages Victoria. Patients were censored at last known medical attendance (consultation, radiology, pathology, other records), with a maximum follow-up period of 24 months.

Descriptive statistics are presented for continuous factors (medians with interquartile ranges [IQRs]) and categorical variables (numbers, proportions). Standardised HCC incidence ratios were calculated, comparing rates by country of birth with those for Australian-born patients (projected population for 2012–13).15 Correlations of clinically relevant variables were assessed as Spearman rank correlation coefficients (not reported); if the correlation of two variables was statistically significant, for the purposes of regression analysis they were either combined (eg, cirrhosis and Child–Pugh class combined as the new variable, “liver function”) or one variable was omitted (eg, BCLC stage but not tumour size retained).

Survival was estimated with the Kaplan–Meier method. As the upper confidence bound for median survival time could not be calculated (the point 95% CI never dropped below 0.5 during the 24-month maximum follow-up period), mean survival time — calculated as the area under the Kaplan–Meier survivor function with the Stata option rmean — is also presented. Cox proportional hazards models were fitted for individual factors associated with survival nominated by specialist hepatologists (crude hazard ratio [HR]); factors for which P < 0.1 in the univariate analysis were included in the multiple regression Cox proportional hazards model (adjusted HR [aHR]). Violations of the proportional hazards assumption were assessed by visual inspection of Kaplan–Meier curves and in Schoenfeld residuals tests. P < 0.05 was deemed statistically significant. All analyses were performed in Stata Statistical Software 12 (StataCorp).

Surveillance at the time of hepatocellular carcinoma diagnosis

The incidence of HCC in Australia is increasing.2,16 The parallel rises in incidence and population-attributable mortality rates16 suggest that the rise in incidence is not driven by detection of earlier tumours during surveillance alone, but may be related to demographic changes and the increased prevalence of underlying risk factors.17 Survival remains poor; our 12-month survival rate of 62% is similar to recent estimates for other developed countries.6,7

We found that survival was better for patients who presented with earlier stage disease, smaller tumours, and compensated liver disease. These factors all predict eligibility for treatment with curative intent, the factor with the greatest positive influence on survival.

Surveillance was associated with improved survival. Despite the acknowledged role of HCC surveillance in managing cirrhosis, only 40% of patients were participating in surveillance when diagnosed with HCC, a proportion similar to the 38% reported for one Melbourne tertiary centre more than a decade ago.17 Surveillance is particularly infrequent among patients of Asian or Australian-born backgrounds and those with alcohol-related liver disease. The emergence of non-alcoholic fatty liver disease-related HCC, linked with the rise of the metabolic syndrome in developed countries, is particularly challenging for surveillance because of the large population at risk.18

We identified two major barriers to increased uptake of surveillance: adherence to surveillance was poor for patients with certain recognised risk factors (decompensated cirrhosis, alcohol misuse) and, perhaps more importantly, a considerable number of patients diagnosed with HCC had hitherto undiagnosed cirrhosis or viral hepatitis. These findings indicate that a two-tiered approach may be needed to improve outcomes.

Firstly, clinicians should be alert to risk factors for chronic liver disease, such as excessive alcohol use, chronic HCV and HBV infections, and non-alcoholic fatty liver disease in certain social groups (eg, patients of low socio-economic status or with mental health problems, injecting drug users, migrants, patients with diabetes or metabolic syndrome). Patients with these risks factors should be screened for cirrhosis, and those with active liver disease should be screened longitudinally. An aspartate transaminase to platelet ratio index (APRI) value greater than 1.0 predicts cirrhosis with 76% sensitivity and 72% specificity,19 and the test is simple to undertake. Community-based screening based on blood pathology and transient elastography identifies significant fibrosis in 16% of patients with hepatitis C.20

HCC surveillance comprising 6-monthly liver ultrasound and alpha-fetoprotein assessment should be offered to all patients with cirrhosis, as well as to Asian men over 40, women over 50, Africans over 20 years of age, and patients with a family history of HCC without cirrhosis but with chronic HBV infections.9 This recommendation should be communicated during medical training and included in specialist society and jurisdictional guidelines.

Secondly, effective surveillance might be best achieved with a national HCC surveillance program. HCC fulfils many of the criteria for such programs: its incidence is high, a non-invasive and inexpensive screening method is available, and early detection is associated with improved survival when combined with effective therapy.

Preventive responses to known causes of chronic liver disease may also be beneficial as public health measures. Improving the diagnosis of viral hepatitis in at-risk populations, together with viral suppression (HBV) and eradication (HCV), could be cost-effective strategies for preventing HCC.21,22 As antiviral drugs for treating HBV and HCV infections are readily available in Australia, increased education and use of these drugs in community practice are important. Non-alcoholic fatty liver disease, a major indication for liver transplantation in many countries, may also be under-recognised as a risk factor by the general medical community.

Our study was limited by inherent biases that affect interpretation of survival outcomes in cancer screening. As cirrhosis, the major trigger for surveillance, is itself asymptomatic and underdiagnosed, lead time in HCC diagnosis varies widely; as the growth rate for HCC is quite variable, length time bias is also important. Randomised controlled trials could circumvent these biases. Two older trials found that HCC surveillance improved survival,8,23 but their methodological flaws limit the generalisability of their findings. Randomised controlled trials are now impracticable, as informed patients usually decline randomisation in preference of direct access to surveillance.24 A number of studies have attempted to reduce lead time bias in HCC surveillance by adjusting for tumour growth during the asymptomatic phase; one such study found that the short term survival benefit of surveillance was markedly reduced after taking lead time into account, but not the long term survival benefits.25

Survival for patients with HCC in Australia is poor. While surveillance allows the detection of smaller, early stage tumours, enabling curative therapies associated with significantly better survival to be initiated, the rate of participation in HCC surveillance programs is relatively low. Cirrhosis had not previously been detected in one-third of patients newly diagnosed with HCC. Improving the identification of cirrhosis in primary care and by other physicians and enrolling patients in surveillance programs may improve their outcomes. A national surveillance program for patients at increased risk of HCC, in accordance with the relevant international guidelines, should also be considered. 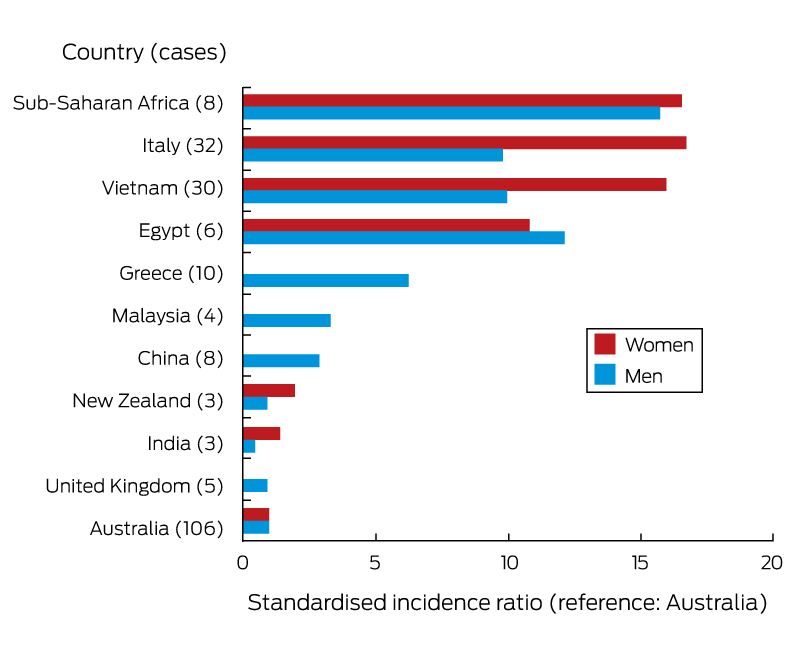 * Countries of birth providing fewer than three patients not shown.